By Anon -  Tue Mar 20, 2012 5:19 pm
Like
Tue Mar 20, 2012 5:19 pm #1048674
A weeks holiday unusually aligned with a spell of nice weather, so I and number 2 son decided to fly the following morning, nice and early. At the field for 0800, plane checked out, bit of ice on the wings, but the early morning sun soon put paid to that. Lined up.......DI/compass, accelerate.........speed obviously increasing, but no air speed, brief moment, which DID seem to last forever whilst I processed the data...then it dawned on me. In my self imposed rush to get airborne, Id forgotten that the pitot head cover was still on!
By this time, I'd used about 1/3rd of the available runway, so the decision was a no brainer, and with fairly robust braking we came to a halt at the last turn before the end of the runway.
The only thing hurt was pride, and fortunately, as it was so early, no one was there to see my embarrassment (or call the emergency services if the outcome had been different)

It did give me pause for thought though, had I been further down the runway, Id have been committed to the take off and *think* Id have managed using engine noise/attitude to complete a circuit.

Has anyone used something like a pitch attitude/engine RPM table to help in this situation?

By Flintstone -  Tue Mar 20, 2012 5:59 pm
Like
Tue Mar 20, 2012 5:59 pm #1048683
Well done for spotting it that soon, many people become transfixed on the world outside going blurry and don't check their instruments. As you demonstrated, once rolling that's your last chance. A friend of mine flew the Twin Pioneer which has the pitots on the roof access to which is via a big trap door. One day he removed the captain's side covers but forgot his own, the error was only spotted once they were airborne. To teach him the error of his ways the captain made him climb up in flight and get them

He never did it again.

As for the table suggestion if you think back to your first lessons Power+Attitude+Configuration=Performance, right? You fly the same aircraft so you should be able to recognise the horizon relative to (say) a screw on the interior trim or better still a number of fingers. Let's say you're downwind, 2300rpm, flaps zero. Hold your hand out in front of you, fingers together, palm toward you. How much space (how many fingers) fit between the top of the cowl and the horizon? For the sake of this exercise let's say it's two. Now extend the first stage of flap. To maintain altitude (assuming same RPM) you'll trim nose down, how many fingers now? This works for any stage of flight and configration, all you have to do is practice and remember.


PS Not sure if you leave your headset plugged in to the aircraft but if you don't consider using the bag to keep the pitot covers in when flying. Remove them during your pre-flight, swop them with the headset. That way if you forget the covers you won't have a headset on which should be a hint you've forgotten something

Anon wrote:Has anyone used something like a pitch attitude/engine RPM table to help in this situation?

Every now and then I fly a circuit with the ASI covered up (and an instructor sitting next to me) - something to do when I've got to have a check ride for some reason anyway.

It turns out to be dead easy, although I end up coming in a bit fast so wouldn't want to try it on a short runway. However ... dead easy though it might be, the lack of an ASI has killed some people.

So, next time you've got an instructor with you, you may wish to give this a go. 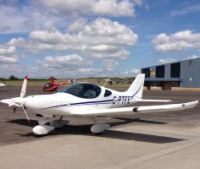 By pat -  Thu Mar 22, 2012 10:39 pm
Like
Thu Mar 22, 2012 10:39 pm #1049506
I had this happen to me, but someone actually put the pitot cover back on after the checks! This was at Oaksey Park and I was actually airborne when I notices zero ASI reading. I judged that if I tried to get in on remaining runway I would put myself in the Hedge so I decided to continue to do a circuit. fortunately I was very familiar with the aircraft and I did a circuit at a high power setting and pulled off one of my best landings!

By akg1486 -  Tue Mar 27, 2012 8:57 pm
Like
Tue Mar 27, 2012 8:57 pm #1050689
A few years ago we were touring Central Europe a week in the summer. There were three of us in a C172. After a refuelling stop in Bautzen, I was in the right hand seat for the next leg to Peenemunde. During the take-off roll, I was surprised to see the IAS increase so slowly, but it was a warm day and we were close to MTOW. At climb-out, I started to wonder what my friend was doing: we were climbing at 60 knots instead of the normal 80. But everything felt fine and everything looked right: attitude, power, and the general view. Levelling out at 2 500 feet, the IAS never ventured on the far side of 80 knots. All three of us scratched our heads: what on earth was wrong??

We double-checked the power setting in the POH, looked at chimneys and flagpoles and at the handheld GPS. Everything pointed at us having an IAS of 110 knots, but the dial still said 80. So there must be something wrong with the instrumentation. We were flying with no problem, so we continued to the destination.

Landing had to be done by power, attitude and a glance at the GPS, but there were no problems. After landing, we got out and had a look at the pitot tube. It turned out that we had hit a wasp on take-off and that the rear end of the little critter functioned as a lid. I don't have the picture uploaded anywhere I can link to it, but we published it in our club's newsletter. Check out page 11 in this file: http://www.aeroklubben.se/DB/Files/Mofl ... aug-09.pdf

The lesson was that it is perfectly possible to fly safely with a malfunctioning airspeed indicator. As it is during take-off and landing it becomes tricky, there is no point in doing an unscheduled stop at the first opportunity; better to continue to where you have planned, at least if you are going to a place where there is a chance you can get help. Your problem may be worse than a wasp or a forgotten pitot cover.

/Peter
Autocorrect is so frustrating. It's always making me say things I didn't Nintendo.

).
My first reaction was - what the fudge. And yes, turned out to be one of my best landings, and apparently (according to the instructor) I nailed the speed.

He did that for other reasons tho (so I don't get fixated on the speedo).

By foxbat53 -  Tue Nov 20, 2012 12:28 pm
Like
Tue Nov 20, 2012 12:28 pm #1120279
I had a problem after a trip to Old Warden last year. Just after take off to return home my ASI suddenly showed my speed as 20mph and I realised it was malfunctioning. My home field was close so i did a normal join and circuit on approach I simply positioned the aircraft as normal and focussed on my landing point using throttle to maintain glide slope- I guess the familiarity with the airfield is a big factor but i found I could land without ASI.

On landing I found that an insect had got into the pitot even though it had only been parked at OW for 2 hours. Now i always put on the cover even for short stops.

Anyone who has flown with me will have heard me say all that every time. It makes it very difficult to miss any of the vital indications.
Timothy
Not sent from my iPad.

greggj wrote:I wonder if pitot heating would help with an insect lodged inside the pitot tube ?

I don't reckon the blocking effect of a hot wasp is much different from a cold wasp. I don't plan to do any tests to find out