By then you are crosswind and at circuit height, are you not?

riverrock wrote:Descending Deadside is over the landing threshold so a defined spot position.

Errr - shouldn't that be the upwind end, rather than the landing threshold?

No.
As @Miscellaneous says - the upwind threshold is "crosswind". You call "Deadside Descending" over the point that you are going to land on which is (I suppose) the downwind threshold. Perhaps that is what you meant?

This diagram from the CAA shows the pattern (although it is far from perfect, including its description of "overhead"). 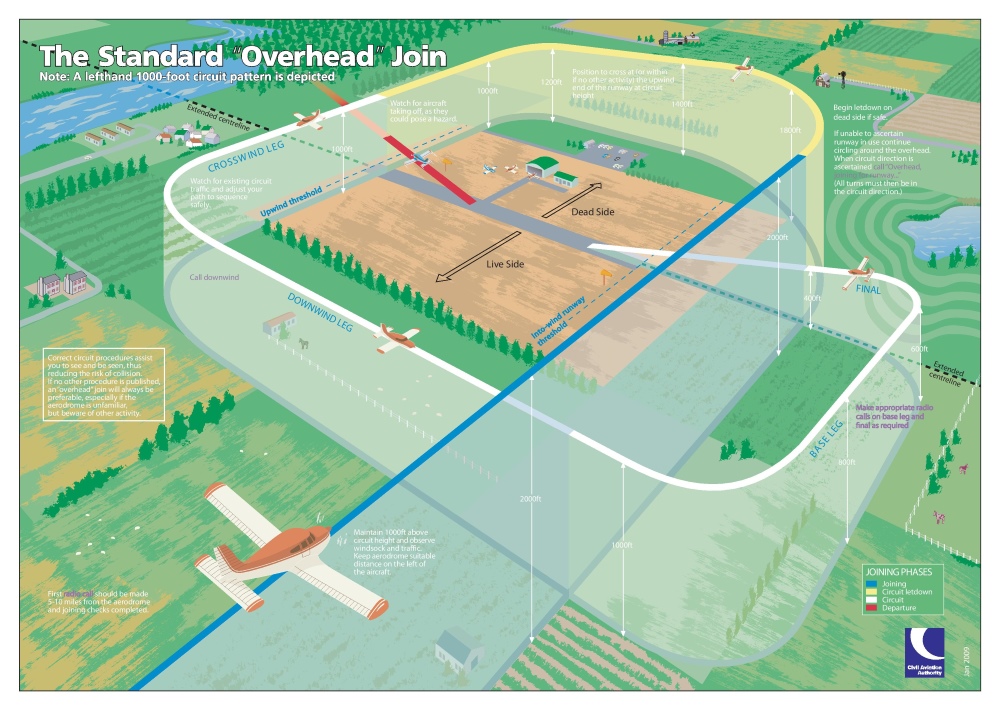 You call overhead when you're, err, overhead. Precisely which bit of the airfield you're overhead at the instant you key the PTT is frankly irrelevant, and there are a host of reasons why you might not be able to make that call at precisely that point in any case. So, if you call "Overhead" when you've still got 3 miles to run then you're not helping people who might reasonably be looking into the overhead to spot you. But beyond that....
AlanC liked this

David Wood wrote:Maybe we ought to have a section of the forum for pin heads and dancing thereon.

Maybe I need to leave!

riverrock wrote:Descending Deadside is over the landing threshold so a defined spot position.

Errr - shouldn't that be the upwind end, rather than the landing threshold?

Gaaa - sorry. My mistake - complete brain fade. I don't know what I was thinking.
riverrock liked this

By Boxkite -  Wed Dec 04, 2019 2:01 pm
Like 3
Wed Dec 04, 2019 2:01 pm #1733721
So, in good old non-radio days (which is what the overhead-join is designed for?), you arrive over the field to check out the windsock and the signals square. So how the hell does one arrive over the landing end of the runway when one doesn't know the circuit direction until you get there. Surely the arrival point 'overhead' traditionally is over the centre of the field??
Dave W, David Wood, kanga liked this

I think that part of the problem is that some people treat it like a drill movement: at the third stroke I need to be here and I need to say this. But in fact it's just a procedure for getting into the overhead (no please, let's not over-fixate on what that means!) from where, in days of yore, you could look down at the signal square and ascertain the runway in use, the circuit direction and one or two other long-forgotten things like whether or not gliding was in progress.

Then, critically, the OHJ provides for a descent into the ATZ on the deadside (being in theory deserted or at least less busy than the live-side), followed by a join to the busier live-side at the least-dangerous point in the circuit, over the upwind numbers. There's really little more to it than that in truth.

The oft-displayed diagram is somewhat misleading because it rather implies that a pilot is always going to be approaching the field from one direction. But in fact he can approach from any direction. The requirement to 'make all turns in the direction of the circuit' only applies when inside the ATZ, in other words having descended below 2000' aal. If he's above the top of the ATZ he can do what he likes in terms of manouvring (other airspace restrictions permitting, of course).
klutz, riverrock, T67M and 6 others liked this