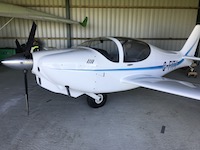 "The Monowheels were a regular feature in the AAIB reports when they were first completed."

That was before the tailwheel was moved further aft and giving better handling.

RV's have also had their fair share of accidents and are only now coming up with a definitive fix for the nose leg on the "A" models.

Look at any nose wheel aircraft on landing and you will see that for the most part the time between touchdown on the mains and the nose leg is usually zero to a few nano seconds.

The hold off and balancing the aircraft on the mains until airspeed decays is rarely done. ....IMHO!