I think we’re getting bent round the axel on this a bit. ..

By gaznav -  Thu Jun 03, 2021 7:16 pm
Like 4
Thu Jun 03, 2021 7:16 pm #1850998
I’m sad to say that as a 2,000hrs+ Fast Jet Aviator and 500hrs+ GA Aviator (including SEP, microlight and glider), then I think this is a pretty poorly thought through idea. There is a common VHF frequency used in the Falkland Islands that works fine but with only a couple of fast jets, a tactical multi, a couple of helicopters and a couple of FIGAS Islanders flying at the same time (probably less than a dozen at any one time are on freq). But during a good UK flying day there could easily be 50-100 or so GA aircraft within a 60-80nm radius (rough range of a low-end VHF panel radio) and so if every aircraft is on that frequency it will be mad! If everyone isn’t on the frequency, then Sod’s Law says that will be the one that you hit!

You only need to listen Brize LARS or the Farnborough frequencies at a weekend to hear how manic it would be - where many avoid the frequency due to how crazy-busy it is. One frequency is not going to be enough for the whole of mainland UK. It worked in Scotland because of the lower density of GA traffic in the Glens and around the Lochs. Possibly only a tiny bit busier than the Falklands. But in the South of the UK this will be crazy busy, to the point of being unworkable and a distraction (and to that effect, possibly dangerous to use).

Folks have discussed that the military tend not to fly at the weekend - that is not correct, the RAF’s Chinooks and Pumas, the RN’s Merlin and Wildcat and the Army’s Wildcat can and do support the Reserves that tend to exercise at weekends. Also, the likes of BBMF, the Red Arrows and other military displays work at the weekend. Also C130J and A400M will be doing parachute dispatch for the Reserves too. So maybe not too many Fast Jets (unless it’s HM the Queen’s Birthday Flypast or QRA!) but certainly some training areas can be quite busy.

In my opinion, if you were going to do this properly for the UK, then you would divide it into at least 7 frequencies. Probably one for Scotland, one for Wales, and then the rest of England dividing it into 5 (one North, one South West, one Midlands and 2 divided in the South East. Even then, that might not be enough, but at least you would have a reasonable chance of success. It’s almost like they have set this up to fail to say that it’s been tried.

Anyway, about ADS-B, isn’t it time I mentioned that a single agreed and common international EC format is what is required, rather than farting around with radio calls... I just thought I’d mention that...

Even the Red Arrows are carrying an ADS-B receive capability now on their transit sorties... 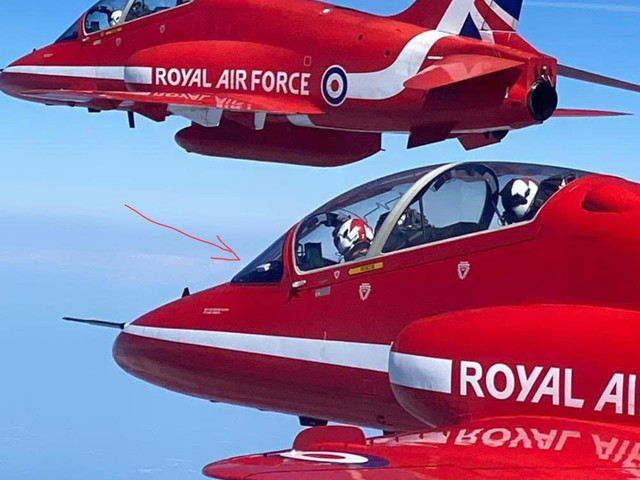 By 3EngineFreak -  Thu Jun 03, 2021 7:38 pm
Like 1
Thu Jun 03, 2021 7:38 pm #1851002
@gaznav
Hi Gaznav, as I said I think this has been poorly advertised (and/or thought through) as something to be used by all GA aircraft. What it should have said was anyone operating at or below 500ft. I’ve had several recent relatively close (not airprox) encounters with Helimed and police rotary lifting from fields where a LL CMN freq potentially could have been advantageous in building SA. In all of these instances we got an EC ‘ping’ but only when very close. Would a radio transmission have given earlier awareness, who knows? But it’s worth a go I think.

As a current Mil RW operator and QHI, I still think it has utility, but only if managed properly. You’re right, this shouldn’t be used by every GA stooging round at 2000ft. It would be a nightmare. But all this can be fed back

I agree, from a GA perspective, this has been very poorly launched by the CAA - https://www.caa.co.uk/General-aviation/ ... ncy-Trial/

They even link to the RAF Safety Centre’s leaflet, that is less than helpful, as it is written for Military Aviators to understand and not for the average GA Pilot. That is another issue perceived by many on this Forum; the apparent lack of GA SQEP in the GA Unit right now. Then there is that God-awful Safety Sense Leaflet No 13 that they link too - it’s so old that it was written “when Pontius was a Pilot”: http://publicapps.caa.co.uk/docs/33/20130121SSL13.pdf

Then just look at the CAA’s advice (which is also demonstrable of their lack of GA SQEP):

When and How to use the VHF Low Level Common Frequency

When not in receipt of a Lower Airspace Radar Service (LARS) or other Air Traffic Service, Pilots should make Blind Calls on the Low Level Common Frequency as shown below. To prevent clutter on the air the frequency must not be used as a chat frequency and transmissions should be accurate, clear and concise.

Transmission Timing:
When safe and suitable to do so
When entering/exiting the Low Flying System
At turning points or significant heading changes
Approaching well-known and recognisable physical features
Any time it is considered beneficial to the safety of the aircraft

As has already been shown on here, the average GA Pilot knows not of the Low Flying Areas (LFAs), nor the fact that the definition of Low Flying System depends on the type of aircraft. As you well know it is <500 ft AGL for military rotary wing and light fixed wing aircraft or <2,000ft AGL for all other military fixed wing aircraft. Again, the fact they have used ‘height’ rather than ‘altitude’ when the majority of GA flies cross country on QNH also shows how badly this has been thought through.

You mention that your own EC appears ineffective against pop-up traffic like HEMS, NPAS and pipeline/electricity inspection. Is that because it is TCAS/ACAS? As such it relies on a round trip 1030/1090MHz interrogation and receive to be effective. Obviously, some transponders have ‘squat switches’ too and so will not reply when on the ground too. So someone lifting from a field could well be a late spot. TCAS often only interrogates once every 5 seconds, so that could also generate a late spot if they are terrain masked and then appear in line-of-sight. A GPS-stamped EC signal like ADS-B is transmitted once or twice a second, so detection is more likely in this scenario of someone conducting a lift during field ops. Again, I would offer that a technical solution like ADS-B is far more fool-proof than a UK-wide common VHF frequency.

The CAA’s guidance also talks about common features, but the military and civil VFR charts mark and name distinctly different features! That is classic Reason’s Swiss Cheese stuff - They called Leominster on their chart, but it isn’t marked on mine!

Also, the guidance is to stay on a LARS or other Air Traffic Service as a priority. That is, at least, good advice. Good airmanship dictates that a call to even an Air Ground Radio Operator within 10nm and 2,000ft of their airfield is wise. So the chances of the conflicting traffic being on the same VHF frequency at the same time, to assimilate the proposed VHF Low Level Freq transmission, is pretty low.

In my opinion, the CAA and MAA would be better off pushing:

1. Getting everyone behind a single non-cooperative EC system that works between all aircraft types (including those visiting from other countries).
2. Building a culture of civil and military Aircrew calling Air Traffic frequencies when at least within 10nm and at <2,000ft of any airfield equipped with a radio frequency. (There was a recent AIRPROX with a Phenom and a Vans RV, that saw the Phenom pass within 2nm at 500ft of a busy GA airfield without making a courtesy call).
3. Have a VFR common chart between the military and civilian Aircrew that shows the same features and names.
4. Have more common frequencies for defined areas (that need to appear on the military and civil charts) that reflect the expected traffic densities and manage the risk accordingly. The military have had LOTA/OTA frequencies that was learned the hard way from several mid-air collisions between themselves. Defining an area and a frequency is the only way this will ever properly work.
5. Report Altitude and not Height.
6. Sort out ATSOCAS. As others have mentioned - Basic Service is next to useless and really not much more than a listening watch. The chances of getting a Traffic Service in VFR during the average GA flying day is very low too. A Deconfliction Service? Forget it! A new approach is needed to ATSOCAS, or bring back FIS, RIS and RAS - at least they described what they give!

Then we might have something like a worthwhile and workable system, and not this half-baked plan that appears to have more issues than advantages.

If the CAA are reading this, then pop my consultancy fee in the post...

The reason height is referenced rather than altitude is that the upper limit of the UKLFS is 2000ft AGL (for both RW and FW).

I still think a VHF LL CMN freq is a good idea to allow integration for common (military vs HEMS/police/electricity etc) users but I think we all agree that this isn’t going to work day to day for GA. That said, it’s available if someone felt the need to use it, for instance if someone wanted to potter around at 500ft in a known busy area such as the Pewsey Vale.

If nothing else discussions like this at least promote some worthwhile interaction between the 2 flying communities, even if only in an informal way

I was mildly disappointed.

The what? The valleys?

Heard, some years ago, near Portmoak,

Except the Lake of Menteith!

PeteSpencer wrote:BTW Your example (5) above unless there really is a place called Honnington would go down like a lead balloon with the Cousins as it would put you right in the centre of Mildenhall's ATZ.

I know where Honington is : our airstrip used to be under its (C)MATZ when it was active with Tornadoes.

The charts show us that the whole of the UK is split up into Low Flying Areas. If I take off in a low performance a/c and just bimble around at 1,500 to 2,000' if I'm not taking a LARS service, I would either tune in to a nearby airfield, or if further away just stick to safetycom.

What does this new frequency do that safetycom doesn't?

How is this supposed to work in this scenario?
Suiting the action to the words

What does this new frequency do that safetycom doesn't?

I make no comment on the new frequency's worth but the clearly stated point is that low level military monitor it.
Without deviance, there can be no progress.

Mid Wales the Scottish Borders and Northern Scotland plus some of the danger areas was my understanding but now I'm not so sure?

Is there a definitive chart like the French have??
John Milner Fairly tolerant PPL/IR flying a TB 20 from Gloucestershire