As someone who makes regular use of the G-INFO database to link ICAO Hex ID’s for specific aircraft to their new EC devices, or to try to track down and resolve ‘rogue’ dual transmitting airframes (heaps of these with the recent batch of new EC installs), I find the accessibility of such information extremely useful, and would quite frankly struggle without it.

I nonetheless share concerns about the ready availability of Full Owner Details - particularly (Home) addresses. I was also shocked to discover recently that the full content of the database is available commercially on ‘disc’ to anyone prepared to pay the CAA’s stated fee. You can even buy a subscription! I’m sure that was never the intention of the ICAO when they made the ruling on openness.

It’s been discussed before, and I have previously questioned why the data isn’t treated the same as the electoral register or the DVLA car database.

The basic details of the aircraft reg and hex etc could all be available publicly online. The personal details of the owners and addresses should only be available for legitimate enquiries and only available on request and with a suitable admin fee. The full register should still be available to all enquirers to view in person at Gatwick during a prearranged appointment with the appropriate fee for an appointment. This would satisfy ICAO, open government and data protection in one go.
HedgeSparrow, exfirepro, gaznav and 2 others liked this

TopCat wrote:If I emit ADS-B with my SE2, is it legal to do so without including the aircraft callsign?

The correct selection of Aircraft Identification (FLID) is certainly an ICAO requirement for the emission of ADS-B. I am not sure what law, if any, you would be breaking if you didn’t, however the field has to be populated with something or the entire emission will be suppressed.
Cub

johnm wrote:I'm reaching the stage now where I'm tempted to buy a pilotaware just to spite @Cub and @gaznav

You certainly wouldn’t spite me by purchasing PilotAware. On the contrary, so long as you have already chosen to make yourself conspicuous to an interoperable standard, ADS-B, I would encourage you to equip yourself with PilotAware for onboard detection. Just be mindful of any shortcomings i.e. non direct detection of FLARM, if you feel that is important to you?
gaznav liked this
Cub

TopCat wrote:If I emit ADS-B with my SE2, is it legal to do so without including the aircraft callsign?

When I got my SE2, I had to register with Ofcom as they appear to require that info for transmitting in a protected part of the spectrum.

Correct me if I'm wrong, but you will need to put in your hexcode in the configuration otherwise it won't work and you'll be detecting your own signals on SD or whatever. But you can put any callsign you want in the 'callsign' bit of the form, so we can always see "Iceman" floating around Devon and get the tea and cake ready.
kanga, gaznav liked this

exfirepro wrote:best of luck trying to get the aircraft tracking app providers to stop showing your aircraft details. From the posts I’ve seen about this elsewhere, (with the exception of FLARM) most if not all users who have requested this have just been told where to go (or as advised by @PaulSS it’s been made so difficult to achieve that they will just give up).

Actually, I think it is pretty straight forward to request and have the tracking data suppressed with a number of companies

All I can say to that is that you must have friends in high places. Most tracking companies operate well outside the reach of the UK authorities so simply ignore such requests.

but regardless, do I take it from your reply that PilotAware do not or do not intend to offer this facility?

Sorry, @Cub I gave up fishing competitions a long time ago, so not biting! In any case replying to that is way above my pay grade I’m afraid - and not something I’d expect PilotAware - or any other company - to reply to on a public forum either. All I’m prepared to say is that in my experience PilotAware takes the handling of data extremely seriously - to the extent that communication within the network is securely encrypted and we take care not to publish any details that aren’t already obtainable in the public domain.

I use my retirement much more productively, helping develop and support efficient cost-effective electronic conspicuity systems and associated equipment.

My challenge, is about the use and distribution of surveillance data for non-operational purposes.

PilotAware isn’t in the business of providing aircraft tracking data to the public. Those commercial organisations that do (including NATS ), obviously find that far easier using transmissions and modes of transmission on the ‘officially recognised 1090MHz band’.
Last edited by exfirepro on Tue May 04, 2021 12:09 pm, edited 1 time in total.
kanga, leemoore1966, seanxair and 2 others liked this

SteveX wrote:On the basis that there is zero evidence that EC has reduced the number of mid airs (not near misses, not ooh he was close but actually 500m away - actual collisions) then I propose the CAA does nothing to standardise or mandate EC and that everyone is free to just install whatever they want in the hope something is better than nothing.

How those 500 aircraft all flew into PFA rallies in the 80s without collision is amazing. Did the pilots really look out rather than at an ipad, incredible...........

Just for clarity the first sentence above is not correct if you take EC in its wider sense. The BGA Accident review 2020 repeats the findings of the 2019 one "There were no collisions in 2019 or 2020. The last glider-glider collision was in 2014. Since then gliders have collided with a light aircraft, a tug, a tug rope, and a vulture, but not with each other" The graph in the 2019 document shows a pretty clear trend.

Of course MAC is rare, so it takes a while before EC has an impact (and Flarm has been around a lot longer than other systems, and adopted in the gliding community to a much higher degree than PAW or ADSB, so far). Note that there have been a number of fatalities of pilots in gliders and TMG in the last 10 years which may well have been prevented if the other aircraft had Flarm or the ability to receive Flarm.

So I would suggest there is evidence that MAC is reduced by EC, however the forms of EC being so hotly debated here have not been around long enough to show their effectiveness. Having lost 3 friends in MAC before Flarm, plus one who is only alive courtesy of "Lofty" Thomas (chutes) I would have to say EC is indeed effective - you can argue MAC is not the main cause of fatalities in general aviation, it is a cause that can be addressed. 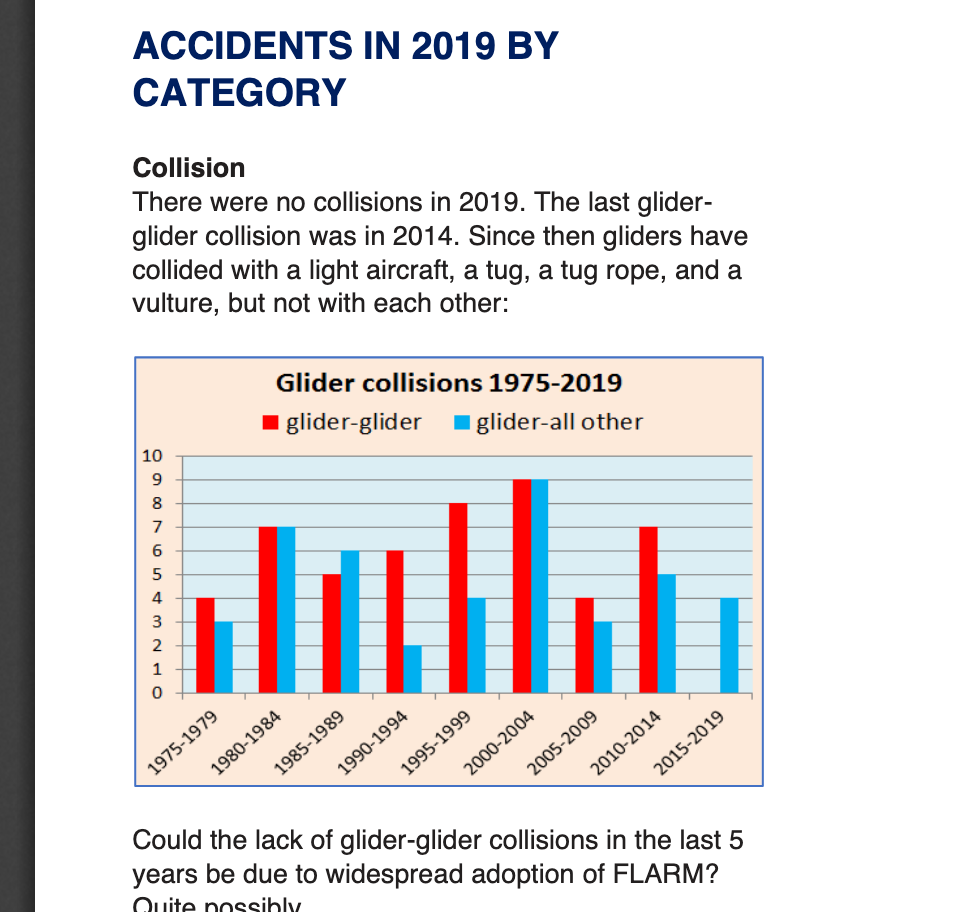 By lobstaboy -  Tue May 04, 2021 5:56 pm
Like
Tue May 04, 2021 5:56 pm #1844899
@ls8pilot it's probably worth pointing out that gliders frequently fly close to each other and the pilots may be working hard to stay in good lift. This is a bit different to how the rest of GA do things and, as I understand it, FLARM was developed specifically for this sort of situation.
I'm very happy to believe that FLARM has saved lives in gliders, but I think the case may be harder to make for the rest of us. I'm still very happy to use EC of course, but it's less likely to be shown to have an impact.
As has been said earlier - it's about drones, not manned a/c vs each other. Amazon might get upset if they keep losing deliveries because they collide with the occasional C172

lobstaboy wrote:@ls8pilot it's probably worth pointing out that gliders frequently fly close to each other and the pilots may be working hard to stay in good lift. This is a bit different to how the rest of GA do things and, as I understand it, FLARM was developed specifically for this sort of situation.
I'm very happy to believe that FLARM has saved lives in gliders, but I think the case may be harder to make for the rest of us. I'm still very happy to use EC of course, but it's less likely to be shown to have an impact.
As has been said earlier - it's about drones, not manned a/c vs each other. Amazon might get upset if they keep losing deliveries because they collide with the occasional C172

Certainly Glider:Glider MAC is a much higher risk & Flarm was developed precisely for that purpose - it's worth noting Power:Glider fatalities have occurred in the recent past - I'm not sure about Power:Power - maybe someone has the numbers over the last 15 years?

Certainly I would agree Drones are what is driving EC . What I think is important is that we don't jump to conclusions about EC's effectiveness or otherwise - it will take a while before general EC equipage reaches the point where most aircraft have it & even then it will be a while before any statistics show an impact.

I would love to know the stats but it seems to me there is a lot more general "traffic" around than, say, 20 years ago - with Gliders, Para/Hang Gliders, LAA types, Microlights, Gyros, etc - although maybe less military activity?

exfirepro wrote:All I’m prepared to say is that in my experience PilotAware takes the handling of data extremely seriously - to the extent that communication within the network is securely encrypted and we take care not to publish any details that aren’t already obtainable in the public domain.

In my experience I would disagree with this statement, I have found and shown that pilotaware publicly allow access to 3 month old tracking data of gliders in Germany and elsewhere. The OGN community project has AUP that no data is distributed (shared) older than 24 hours. When re-distribute OGN data the DDB tracking privacy choices must be followed, I do not believe an ATOM station follows this rule.

With regard to the network is securely encrypted, well yes using a ZeroTeir mesh VPN which allows the Pilotaware team unrestricted network access to the Raspberry Pi on the home network and joins all the stations up so they could possibly see and access each other. From a security point of view this is basically the same as connecting all the stations to one ethernet switch, bypassing the security offered by your ISP & broadband router . The security of your home network now relies on the Pilotaware team and any misconfigurations could allow anyone else on that ZeroTeir network access to the other computers on your home network. For the sake of clarity I do not believe the data is encrypted and is sent over clear text over the ZeroTeir encrypted tunnel, unfortunately the PAW team disconnected my station before I could check this. I also wasn’t able to check if the SSH keys left on every ATOM station have been removed as these allow the developer command line access without the need for username or password.

I have grave concerns over the data privacy / use and security of the system.
gaznav liked this
Vince

That looks rather serious.

exfirepro wrote:PilotAware isn’t in the business of providing aircraft tracking data to the public.

Perhaps then you could describe the relationship between PilotAware and 360Radar and whether they are prepared to accept requests not to depict individual aircraft?
Cub