By 2Donkeys -  Wed Apr 28, 2021 2:18 pm
Like
Wed Apr 28, 2021 2:18 pm #1843467
The constant recapping and previewing is also a device to attempt to combat channel surfing. If you join late and don't know what's happening, the recap will tell you. The preview attempts to keep you from surfing onwards to a different channel by persuading you that things are about to get really good. Seriously annoying for those that tuned in at the start and intend to watch through to the end.

A close cousin is the immensely long intro section which is the same for each episode. Designed to attract people who haven't watched previous episodes by convincing them that they are now fully up to speed!

This show was guilty of all of the above.
IFR Flying Videos

I really just want an excuse to mention it now and again, to remind all of what can be done.

JAFO liked this
Life is short but I still fly slow

While it's Bomber Command I thought this might amuse some of our readers (although I'd be interested to know why 12 aircrew are apparently disembarking from one Lanc!) : 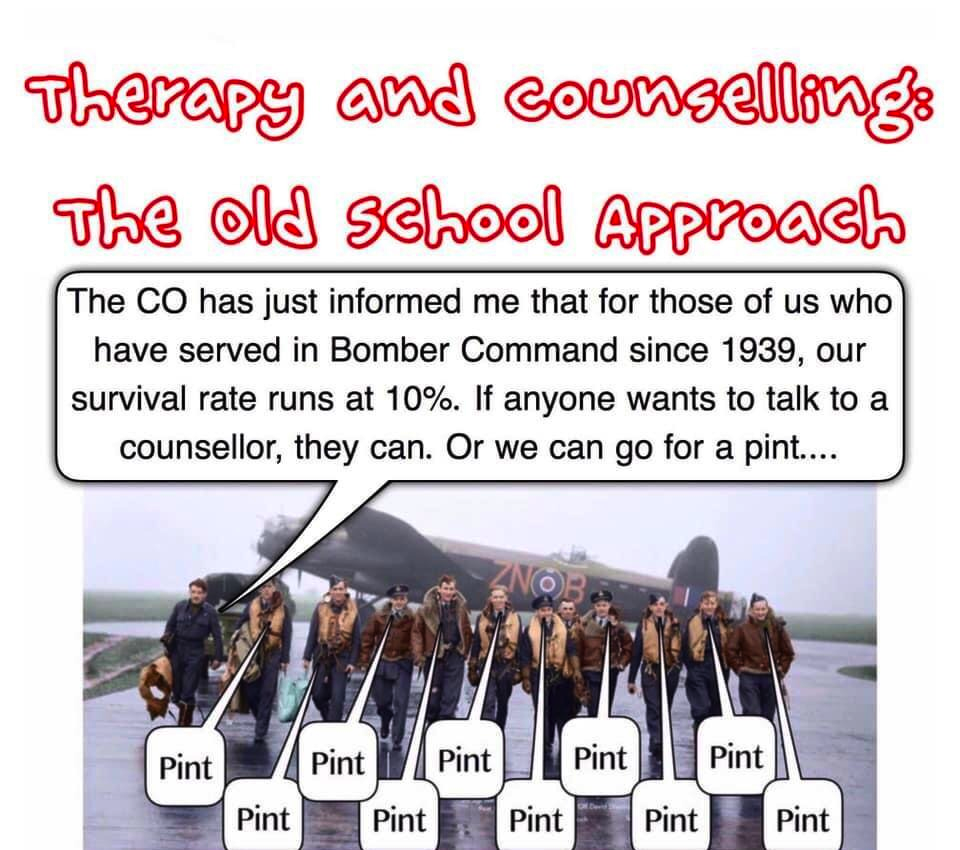 Rob P, A4 Pacific liked this

ls8pilot wrote:While it's Bomber Command I thought this might amuse some of our readers (although I'd be interested to know why 12 aircrew are apparently disembarking from one Lanc!) :

The Lancaster had a crew of seven - the photo shows seven chaps with Mae Wests (six wearing, one carrying), who I summise are the aircraft crew, so I would guess the others were not from that particular aircraft. But who knows!

By Crash one -  Wed Apr 28, 2021 4:50 pm
Like
Wed Apr 28, 2021 4:50 pm #1843504
There is an article in this weeks Radio Times describing what training was actually done. 170+ hours between Tiger and Harvard then perhaps 10 on Hurricane.
The programme didn’t mention that very much, if at all.
The small amount of upside down work that Guy did, he was still uncomfortable with actually flying it, let alone fight with it. Wartime pilots didn’t go into battle before the basic flying was “automatic”.
Unrealistic TV nonsense for the great unwashed.
No doubt at all that Guy would have made a pretty good fighter pilot with his attitude to fast and dangerous pursuits. Didn’t need the programme to tell us that!
The 6 P principle
Proper
Planning
Prevents
Particularly
Poor
Performance

Crash one wrote:170+ hours between Tiger and Harvard then perhaps 10 on Hurricane.

ls8pilot wrote:While it's Bomber Command I thought this might amuse some of our readers

Rob P
Charles Hunt liked this
"We sleep soundly in our beds because rough men stand ready
in the night to visit violence on those who would do us harm."
- George Orwell-

Rob P wrote:I spent some time with Guy at a Ford Day at Silverstone.
The impression I got from a half hour meeting or so was that he was a very genuine chap, a little baffled that people where happy to pay him lots of money and supply lots of kit (Ford) for stuff he would have been doing at his own expense anyway....
Rob P

Good insight thanks. He talks well for TV, is an handsome chap and I believe, is genuine. There's obviously a lot of artifice involved in a TV show.
I doubt many people understand the skill and bottle required to fly a motorbike around the Isle of Man, including crashing at huge speed and coming back from that, and he's been successful at it, it's a passion. I doubt that flying fazed him at all, apart from the 'book learnin'.
Rob P, ls8pilot liked this