By JonathanB -  Thu Dec 03, 2020 9:41 am
Like
Thu Dec 03, 2020 9:41 am #1812229
Vaguely related to this thread... I want to send a smallish parcel (not sure exactly the size or weight yet) to my mother in France. She suggested that it might be cheaper to use someone other than the Post Office and Royal Mail/Parcelfarce to do so - any recommendations?
Jonathan
The views I express here are entirely my own and are not intended to represent my employer.

JonathanB wrote:Vaguely related to this thread... I want to send a smallish parcel (not sure exactly the size or weight yet) to my mother in France. She suggested that it might be cheaper to use someone other than the Post Office and Royal Mail/Parcelfarce to do so - any recommendations?

try, http://www.parcel2go.com
JonathanB, Colonel Panic liked this
The quickest way to fall out with people is, discuss politics.

I see the price of a first class stamp is soon to rise by almost 12% to 85p. What planet are they on?

.. from 2 1/2d. Air mail to Europe was 6d (surface rate was less), further afield was 1/3 (surface much less), both with very strict weight limits; but IIRC Post Office Air Letter forms (3 ~postcard-size sheets of flimsy paper, to be folded, sealed with lickable glue tabs; still sold ?) were same rate worldwide. I also recall the 11d stamp, used, being the rarest for collectors, since it was rarely needed, and bought new usually only by collectors!

Is low-level, low-cost, amateur and schoolchild philately still a hobby ?

.. back to an earlier question (sorry, longish

I believe Royal Mail in England [sic] was originally so-called from Tudor times, when it was indeed for the exclusive use of the Monarch, Court and government correspondence by official couriers, who wore distinct uniforms. This was for legal reasons, because interference with it/them was a capital offence, so potential offenders had to have 'fair warning'. During the Commonwealth, Cromwell brought in legislation to extend that legal protection to any mail of any citizen being conveyed by a carrier licensed by Government. On the Restoration in 1660, that legal protection was continued, but the carriers (eg some but not all 'stagecoaches' which thus became 'Post chaises') had still to be licensed, with the courier (who might be the commercial driver, but often the Postillion) in appropriate uniform and the mail compartment suitably emblazoned; and the Royal Mail title was reintroduced. Cromwell had, however, also introduced a provision that authorised agents of Government could 'interfere with' (covertly intercept, copy, reseal, send on) the mails of private citizens as long as they had a legal Warrant. This continued after the Restoration until the Mazzini case revelations ..

.. when it ceased because Ministers stopped authorising Warrants (but remained legal). The legal provisions were overhauled under the legislation which set up the Secret Service Bureau in 1909, when Warrants (mostly against suspected Imperial German covert agents) restarted.

It was under Trollope as Postmaster-General that there was the innovation (in UK first; which is why UK stamps, uniquely, do not carry a country name) of prepaid postage was introduced (previously, recipient paid, or might choose not to accept the item); and the Post Office started using its own exclusive vehicles and people for local and then gradually more distant deliveries and collections, rescinding the licences of other (road and street) carriers. However, Royal Mail rail carriages, or compartments within them, were used for long distance as the rail network spread; and required the Royal Mail cipher, for the same legal reason. That emblazoning of British airliner baggage compartments authorised to carry Royal Mail compartments with the same cipher continued until fairly recently (and may still, for all I know) for the same legal reason: to signify to any potential miscreant that extra legal penalties in British criminal courts may accrue for any interference. It is also, I gather, why Royal Mail vehicles (including extra ones hired for the Christmas rush) must carry Royal Mail signage (even if only temporary); and why that signage must be erased when the Royal Mail sells its surplus vehicles. It was also why the Royal Mail signage had still to be used on vehicles while (briefly) the 'brand' was relabelled 'Consignia'.

nickwilcock wrote:
I remember the outrage when the letter rate went up to 3d in 1957 and the purple stamp came in! That equates to £0.32 in today's money.......

Confirmed :
sad hoarding git that I am , I kept the letter informing me of my place at Univ Camb Dec 63 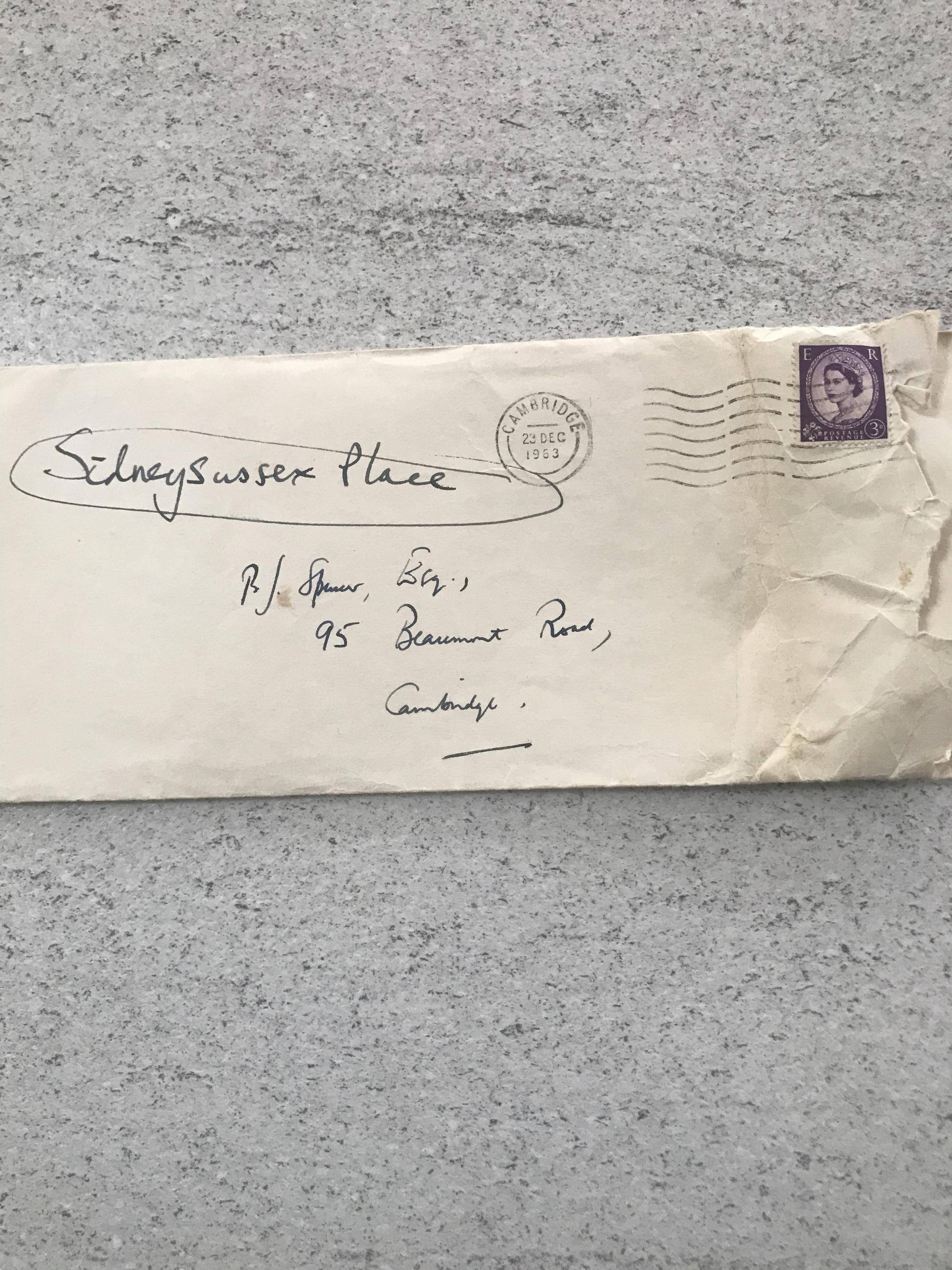 MikeB, Flyin'Dutch', Pete L and 1 others liked this
Pete S as was

The bad news, apparently I have to allow 10 days for delivery.

FFS Royal Mail - you'd think that given your main line of business is delivering stuff, you could actually make the effort to do next day delivery on something that's already 3 weeks later than you claimed it would be when you took the order.

I could have actually got a sofa quicker than stamps, and that's an industry that specialises in long lead times. Much as I want to like an old British institution, and value the USO, you make it very difficult.
TheKentishFledgling liked this

townleyc wrote:and ISTR it was still only 4d in the early 60's

Long before the days of first and second class postage (probably back in the 60's) ISTR there was a differential in the stamp price based on whether or not the envelope was sealed or the flap of the envelope was simply tucked in.

Does that ring any bells with anyone? I can't think why that would impact the cost but I'm sure there was something about sending unsealed letters.

Seemed to apply mostly to birthday cards etc.
Pete S as was

We are having post and cards sent mid December delivered today .

Parcel Force even worse - sent correctly addressed and returned to sender all in 12 days !