We currently gave 2 blink outdoor cameras which I find alright for their fairly cheap price but the app can be a bit hit n miss.

Ultimately we want 2 wireless cameras on the external of our home, one covering the side drive where we park up and the second in the back garden covering the gate and shed. Finally we would like something on the front door covering the front. We have a wired doorbell and coach light so there is power. Iv been looking for a traditional looking coach light with a built in camera but nothing is jumping out.

Do we have any experts/experienced people happy to part some wisdom?

By carlmeek -  Tue Jun 30, 2020 7:04 am
Like 2
Tue Jun 30, 2020 7:04 am #1780397
I have 24 cameras. All DIY using Hikvision IP cameras. They are each 4K quality and work brilliantly at night. We then use a hikvision NVR with a hard drive to record them. The app allows us to access live and recordings and works brilliantly. We also have a big TV displaying the images so we can keep an eye on things. It’s great for spotting visitors, deliveries, keeping an eye on the kid around the place, and of course security. 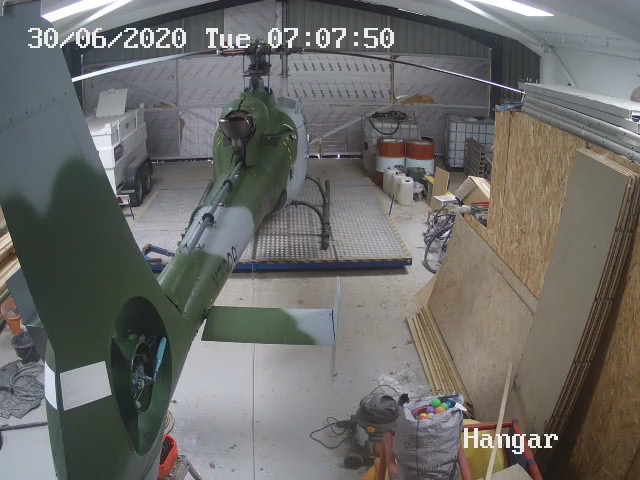 There is no hard evidence that CCTV reduces crime.
Invest in other proven security measures (locks, lighting etc) .
Others may disagree!

I’m not sure there’s too much evidence better locks help. If someone wants to get through a door they will do! Unless you replace all your doors with steel ones the lock makes little difference.

I think Security is more about image and putting them off trying than stopping them.

It took me quite a few years before adding cameras, we added at the airfield first. They proved to be so useful, I decided to install.
Gazelle AH.1, RV-10, RV-8, Sting and Ikarus C42.
www.flightsportaviation.com
www.onlinegar.com

As we didn’t have power to existing doorbell it took me over a year pondering but I finally fitted it with ext power as another lockdown project last month.

As we live at the top of a cul de sac( used to be our old garden) I’m most impressed as the Ring bell camera provides a clear colour view of our small front garden, drive , front of garages and road which is the sole access route to our pad .

The faint (adjustable) jingling every time someone comes to the front door (postman , newspaper delivery ) takes a bit of getting used to but at the same time provides reassurance the system is working.

However since registering with Ring I have had a number of emails regarding Ring DIY wireless CCTV full systems, which I am now sorely tempted to install for cover of our rear /side access as our property backs onto a recreation ground .

gasman wrote:There is no hard evidence that CCTV reduces crime.
Invest in other proven security measures (locks, lighting etc) .
Others may disagree!

Perhaps not hard evidence, but I'd go with circumstantial.
I had one a couple of years ago with two lads coming up our front path, until one of them clocks a CCTV camera, points at it, and they about turn. Probably CCTV salesmen who realised we didn't need to buy anything from them, but might have been up to no good.
During lockdown, we watched from house #1 someone at house #2, having a through look through windows, in the back-garden, etc. Decided to get the neighbour to park his car on the drive, move the bins, etc to give the impression someone was there.
Whether it stops someone putting a balaclava on and kicking in your back door is probably less clear.
gasman, Flyin'Dutch' liked this

Moving house in a month, planning on the Blink or perhaps Ring wireless cameras.

Colonel Panic wrote:I recently ditched my old coax-based CCTV DVR system to a Cat5e IP based system and have been very happy with the increased flexibility & performance.

You'd never have done it without Flyer Forum Tech Support though!

PeteSpencer, Colonel Panic, rikur_ and 1 others liked this
GrahamB

Whilst I have had oodles of help & advice re: the network infrastructure, most / much of the CCTV element has been my own doing. Whether that was a good or a bad thing, time will tell.

Meanwhile, herewith a snap of my new Data Cabinet. It is only a 10" cabinet, but sadly I couldn't get the more standard 19" box past Management. It is the beating heart of a 95+ node network - over 50% of which is wired. I even managed to design and 3D print a 1U mount that takes three PoE Raspberry Pi's

Still can't get my VPN to work though. 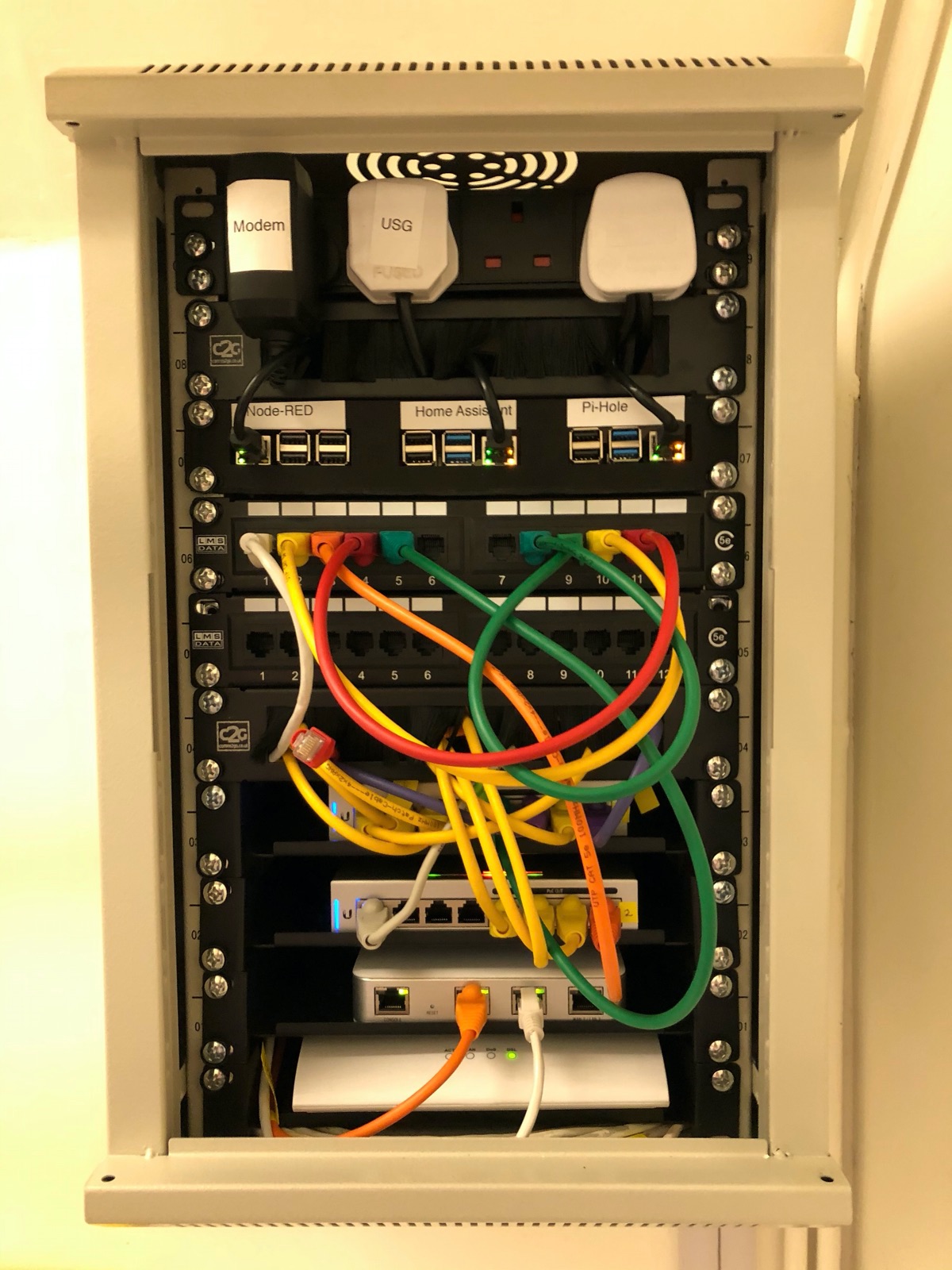 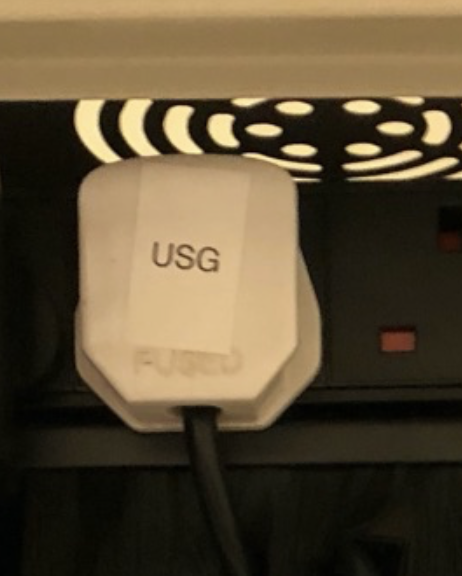 gasman wrote:
There is no hard evidence that CCTV reduces crime.

It depends entirely on what type of property you are trying to defend.

If you own a large country pile and an organised crime team decide to target you, they will have the means, the expertise and the determination to cope with pretty much anything you care to put in their way. That is why premiership footballers suffer burglaries. CCTV then becomes more use as a potential means of evidence gathering than pure deterrence. Still worth considering alongside other sensible measures for that reason.

If, like the majority of the population, you live in less grandiose property, then visible CCTV, and signs advertising the fact they are there, together with good perimeter security, is effective. The vast majority of domestic burglaries are opportunistic and burglars are lazy (otherwise they would have proper jobs and not be burglars); they will invariably go for the softest target, which is why crime prevention advice always talks about open windows etc. There is no point having strong locks and leaving windows open. That does, sadly, mean that often crime prevention is not about stopping crime, just stopping it against you and pushing it onto your less vigilant neighbours. So although having CCTV may not be reducing crime, it is reducing the chances of you being the victim.

I have a small CCTV arrangement and the signs