Fixed Wing vs Heli in UK

Keen to get myself flying but totally stuck between PPL and PPL(H). Moving budget and costs aside, I was hoping to get some feedback from those that have experienced flying both in the UK?

Reasons for learning are purely recreationally. I'm based in London and would like to go flying for a few hours on the occasional weekend, including flying myself and a passenger or 2 into the country for a spot of lunch, or even over to France.

I did a trial lesson in both a couple of years ago but that didn't help the decision. I am keen on starting in the next month or so.

Helicopters are great, you don’t need a runway, you can land in many more places, there are even pubs that let you land in their gardens.
They are quick, efficient and fun. They are a much better vehicle for the type of flying you aspire to.

But if you’re only flying on the odd weekend, you’d probably find it hard to fly one safely.

However, the one thing you cannot do with helicopters is discount cost. They are eye wateringly expensive.

Most people who fly rotary, fly fixed wing as well. They have different missions and they are fun in different ways.

Put it this way,

controlz wrote:Reasons for learning are purely recreationally. I'm based in London and would like to go flying for a few hours on the occasional weekend, including flying myself and a passenger or 2 into the country for a spot of lunch, or even over to France.

So you want more than 2 people in the aircraft, so for rotary you'll want to train on an R44 minimum. You could do the PPL(H) in a 2 seat, then convert, but to be proficient may as well train on the R44.

Most people won't let you hire their machine unless you fly for at least 1/hr a month with them - or you'll also need check ride too if you SFH outside this. It's an insurance thing. You'd also need to check with who you hire from about landing at private sites.

I did my PPL(H) years ago, I didn't do a PPL(A). Although I have a friend who owns a fixed wing who often asks if I would be interested in getting a PPL(A) so I can be more use than watching the clouds go by when flying around with him.

Rotary flying is great fun, lets you go places and see places you wouldn't normally experience and land in them. Helicopters generally fly because of the pilot's handling and are constantly watching you to see if you lose concentration - at which point they plan to kill you.

Whichever way you go remember, if the wings are going faster than the fuselage - it ain't safe.
Cessna571 liked this

Cessna571 wrote:[Edit by Moderator]
But if you’re only flying on the odd weekend, you’d probably find it hard to fly one safely.

Thanks for your reply. Tell me about what you mean here please.

Cessna571 wrote:[Edit by Moderator]
But if you’re only flying on the odd weekend, you’d probably find it hard to fly one safely.

Thanks for your reply. Tell me about what you mean here please.

It’s quite hard to fly a helicopter, if you don’t do it regularly, you won’t be able to do it safely.

It’s not like driving, there are no lay-bys in the sky to pull into and have a rest, there is no hard shoulder if things go wrong.

- choose one (fixed-wing or helicopter) and do it well

- don’t go with the “save-a-quid approach” promoted above (cheap plane hours with heli add-on); if you want to be a good/safe helicopter pilot, train and fly in a helicopter

- regarding flying skills, within reason, any reasonably coordinated person can learn to fly a helicopter – what makes the real difference to safety is decision making skills (this applies to any type of aviation)

What would I choose? I’ve been flying helicopters privately for the past 15 years and also live in London; I hold EASA PPL(H), FAA PPL(H) and South Africa Licence Validation (piggyback on my EASA PPL).

As for suitability of either in the UK:

SAFETY: in a fixed-wing should you have a problem, you ideally need a large flat uninterrupted surface to land – the British Isles are not exactly the flats of Arizona. In a helicopter you only need the space of a couple tennis courts viewed downward at a 45 degree angle in any direction. Should you need to land right now, you can - you're in a helicopter.

FUN & ENJOYMENT: Have a read through the forums and all the “great” places fixed-wing guys can land in the UK for the “mug of tea and bacon sandwich” then think of all the great hotels/resorts/pubs/country houses that you can fly to and land right on the lawn in a helicopter. Below is a snapshot of landing spots in the southern UK (snapshot from Helipaddy app)– I’d invite the fixed wing guys to post a map of where they can land. 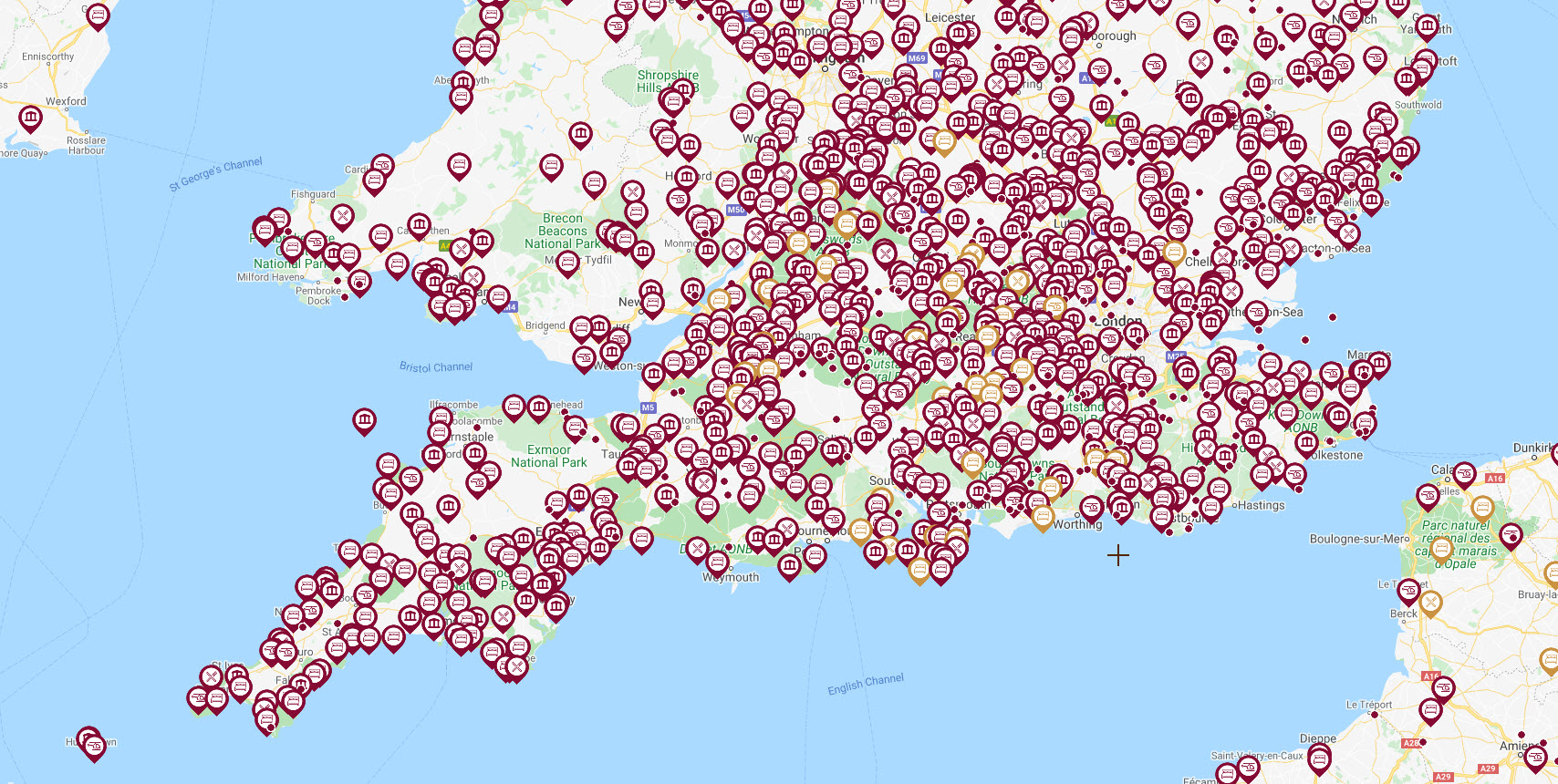 I came to helicopter flying after fixed wing, and was 50 when I learned to fly helicopters. I found it more difficult than learning to fly fixed wing, but I was 20 years older and some fixed wing habits needed to be "unlearned." When you can hold a hover, and talk on the radio at the same time, you will know you are nearly there.

I believe you need an EASA LAPL or class 2 medical certificate to go solo in all helicopters and most training fixed wing aircraft (microlights excepted).

By muffin -  Fri Jun 12, 2020 1:18 pm
Like
Fri Jun 12, 2020 1:18 pm #1776654
I got my fixed wing PPL in 1980 and my PPL(H) in 2000 and have now done around 800 hours in each. I have my own R22 and a third share in a Eurostar fixed wing. These days I fly mostly rotary and really only do enough fixed wing to just about stay current. Of the two, rotary is far more fun - the best simile I have ever heard is “controlling the flight of the bumble bee” but is also far more unforgiving and intolerant of mistakes. A fixed wing aircraft wants to fly but a helicopter needs you to fly it continuously or it will bite you hard. Helicopters are expensive and the sort of fixed wing that I do almost free by comparison.

If I am just bimbling locally I would always use the helicopter but if I am actually going somewhere I use the fixed wing as it is just as quick and far more relaxing to fly for a long period.

If you can afford it, go for the PPL(H) as you can always do the (A) later. Whichever one you do first will stand you in good stead for the other as there is a lot in common between the two courses.