Aircraft down nr Abergavenny (12 May)

By cockney steve -  Mon May 13, 2019 12:02 pm
Like
Mon May 13, 2019 12:02 pm #1693151
Well, everyone who's jumped on the "emissions" bandwagon,- just look at that pall of smoke. then consider the number of scrapyard -fires where piles of fridges, tyres or other difficult to dispose-of items get incinerated (conveniently)....
Yes, I know it's a bit off topic, but a stark reminder that car, wood-burner and similar domestic-emissions are just a drop in the ocean in the big scheme of things.

The "knockers" of Robinson helicopters claim they're unsafe.....the supporters point out that there are lots of them, many being used intensively in roles they were never designed for.
Supporters point out that the number of hours flown makes them as safe as the venerable Bell Jetranger......having said that, I am not that desperate to experience Rotary- flight, that I'd step into a Robbo.

By cadoganpier -  Mon May 13, 2019 2:20 pm
Like
Mon May 13, 2019 2:20 pm #1693179
It's also worth considering that I doubt your average 30 year old Cessna or Piper would have allowed the occupants to survive that impact. Judging by the photo's it hit hard yet the cockpit survived remarkably well. I can't comment on whether they get pranged more often than the rest of the GA fleet but I know if the unfortunate did happen I fancy my chancers a lot more in a Cirrus that pretty much anything else.

These are the rescuers - Daniel Nicholson (L) and Joel Snarr (R). Their cahonas would no doubt not fit.

Selfless brave people. Should make it onto the Honours List.
Jonzarno, Dave W, Bobcro and 13 others liked this
Frank Voeten
Use email please rather than PMs 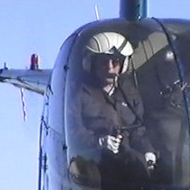 George wrote:The aircraft that crashed in almost that very spot a year or so back had just taken off then clipped the trees that run between the strip and the dual carriageway. There are reports that this a/c was not actually landing there (or certainly had not taken off from there as shown earlier in the thread) and as always one can only surmise as to what happened. The strip isn’t always easy to make out but strangely that slight bend in the road is a good reference point. Perhaps there was an emergency and in a rush to get down the guy did not notice the power lines. Perhaps.

In the BBC story the pilot says he landed there to pick up his niece and nephew, so it appears he clipped the telegraph pole on the way out.
EddieHeli

EDIT: Answered my own question, looks like it was almost straight across the runway, maybe favouring the south slightly, but not likely to be much help in shortening the take off roll.

TheFarmer wrote:
More than PA28’s and 172’s that fly thousands of incident-free hours in comparison, and have for decades?

I’ve been saying it for ages. The Cirrus is rapidly proving itself to be unreliable and dangerous.

Compounding that is the fraternity of shiny fresh PPL’s who buy one when they have far more money than flying experience and who seem to be using up a rather worrying volume of AAIB ink and A4 paper.....

I could also have been saying for ages that Jeremy Corbyn is a closet cross dressing Neo-Nazi, doesn't make it any more truthful than your claims that "the Cirrus is proving itself to be unreliable and dangerous" when in reality, it's improvement in safety records due to Owner Training are moving in the right direction.

This accident potentially had all the makings of reopening the debate on pulling the red handle - I mean, imagine that these two brave men hadn't dragged them out and all would have perished, would we have been congratulating the pilot on ignoring his Chute and killing himself plus two members of his family?

Worse still, imagine the chute had exploded whilst the men were attempting the rescue - what would we be saying? Better to use the chute, if it's available?

FYI: This past few days, a C182P had an engine failure and crash landed, again by clipping power lines, crashing inverted; unfortunately in the crash one passenger was killed. Had they had a chute, maybe things would have been better. Personally speaking, if the donkey up front stops, I hope that I would run through the appropriate check lists whilst descending at best glide but at 1000 Feet AGL latest, I would pull.

Why? The pilot of the C182 thought he could make a perfect forced landing. Maybe 99 times out of 100 he could. But now a passenger is dead because he didn't see the power lines. Imagine having that on your conscience when the Chute could have saved them all.......
20.000v in his arms but the bulb inside his head still doesn't light up........

Full Metal Jackass wrote: in reality, it's improvement in safety records due to Owner Training are moving in the right direction.

They have already moved in the right direction, to the point that the accident rate per flight hour is better than comparable SEP aircraft, despite them being used more for routine transport by lower-time pilots than their high-performance competition.

Also, referencing an earlier comment, they are certified to more stringent levels of passenger protection than older designs. Other things being equal, you are less likely to hurt yourself if you crash in a Cirrus (with energy absorbing seats, airbags, nothing hard for your head to hit, etc.) than in older aircraft that had less stringent certification requirements.

But lets not let facts get in the way of prejudice.
Flyin'Dutch' liked this