Thanks everyone. Does this mean I'll be able to self declare or would it be a medical with an AME?

If flying VFR in U.K. only with an EASA PPL/LAPL you can, until April 2020, self-declare your medical status on the appropriate CAA form previously mentioned.

To fly outside of the U.K. (e.g. to France) on an EASA PPL/LAPL requires, respectively, Class 2 or LAPL Medical.

In my case, I hold an EASA PPL. My Class 2 medical expires in October. Was originally intending to convert to LAPL when Class 2 expires and thereby maintaining all of my current privileges ( i.e. day VFR, valid across Europe) but with the less onerous medical requirements.

Realistically, with low expectation or need of any trips abroad, I am now seriously considering foregoing that particular advantage, at least for the time being, and self- declaring. Hopefully, things will be clearer by next April and my intended conversion to LAPL (current conversion fee is £41) might not be necessary if the proposal to allow an LAPL medical to validate EASA PPL (with LAPL privileges) is eventually adopted.

As one contributor points out, a conversion from EASA PPL to LAPL also might not be a straightforward process to reverse.

I understand that I can use my existing PPL with just a self declaration (UK only) no need for LAPL or medical examination. Which is fantastic news as I've been grounded on my current Class 2.

My question is this: You talk about a proposal to allow an LAPL medical to validate EASA PPL (with LAPL privileges) being eventually adopted. Would the LAPL medical in those circumstances be a self-declaration or would I need to see an AME or doctor?

Also, remember that the option to use a PMD on EASA aircraft (such as a Cessna 152 / PA-28 etc.) currently expires in Apr 2020. It should still be permitted on Annex 1 aircraft thereafter though - such as a Chipmunk or Permit to Fly aircraft.

Another point to note is that, if the UK was daft enough to leave EASA, any UK-issued LAPL would only be valid in either UK airspace or airspace whose NAA has agreed to accept it - because a LAPL is not valid outside EASA Member States.

Unless you wish to tour abroad, there would be no benefit to you in giving up a full PPL in exchange for an LAPL unless you need the reduced LAPL medical for that purpose. In fact it would be disadvantageous if you ever wanted to revert back again.
Remember that an LAPL medical is less onerous than a class 2, and dependent on what is preventing you from obtaining a class 2, it may not be a problem obtaining an LAPL medical, but then why bother? If you are happy to remain with U.K. only flying on a full PPL/and self dec until such time as an LAPL medical can be used with a full PPL (allegedly imminent

Mikebbb, until April 2020, as others have stated, you can self-declare medical fitness on your existing EASA PPL so I, too, am puzzled as to why you are considering converting to LAPL at this time as it would offer you no advantage but rather the reverse.

The “self-declare” is, in effect, a temporary U.K. approved Medical and not a “European” approved Medical, hence the “U.K. only” airspace restrictions of the former, irrespective of whether your license is PPL or LAPL.

For flight outside of the U.K. i.e. elsewhere in Europe, there is no “self-declare” option and, therefore, flight beyond U.K. still requires a Class 2 Medical for EASA PPL or the LAPL Medical for LAPL. The former requires an AME, the latter an AME or willing GP.

In my case, with the Class 2 expiring in October, I shall either:
(a) undergo the LAPL medical exam in October and convert to LAPL in order to maintain existing ability to fly abroad
OR
(b) if unlikely to be flying abroad before next April, “self-declare” in October and retain my PPL (as U.K. only) until next April in the hope that the long awaited LAPL Medical/PPL combination is finally allowed and thus restoring the ability to fly abroad on my PPL subject to an LAPL Medical rather than a Class 2 one.

I hope this gives you food for thought before you prematurely, and perhaps mistakenly, part with £41 to convert your PPL to LAPL for no beneficial reason and then perhaps later have difficulty in reversing the process and at further expense!

And “self-declare” is precisely that. You simply fill in the CAA form and send it in but bear in mind that any dishonesty could result in serious consequences!

My AME suggested I self-declare on a LAPL so I assume I'm OK to do so.

I have a share in a Eurostar microlight so took my NPPL(M) last week so I can fly while grounded. I haven't actually got the licence back though so I assume in the meantime I can follow your suggestion to use the PPL with the self-declared certificate I got for the microlight licence.

My problem is that I have many and varied medical issues (from a CAA point of view) although I am completely fit. It currently costs me £2000 a year to undergo privately all the tests required to get me through the medical hoops - and even then I'm getting grounded. I am just sick of it and self-declaring is very appealing. I've just had a look at the requirements for a full LAPL medical and, while I'd probably pass, it would still be very onerous and expensive.

I will take your advice and keep the PPL until April (it was hard won and I'm loath to let it go) and see what happens then. I've asked the school I hire C152's from whether they will rent them to me on that basis but haven't heard back yet.

Mikebbb wrote:I've just re-read your responses - so a self-declared medical with a LAPL means I can only fly in the UK? Even now while we are in the EU and EASA? Is that so - I didn't realise that.

Yes, at first, it is confusing but the logic becomes clearer over time even if it remains complicated!

And, as we have said, if all you want to do is “self-declare”, you can do this on your existing PPL under the temporary exemption which exists until April 2020.

No need to change your license for the LAPL just to “self-declare”.

Medicals relate entirely to a pilot’s fitness to fly whereas pilot licenses and ratings relate to both any given aircraft type and pilot qualifications.

Note also that the NPPL is a U.K. only license whatever your pilot medical status. The clue is in the title.

The introduction of the EASA LAPL has virtually eliminated all NPPL(A) training courses, hence, NPPL(M) which, whilst the cheapest way to get into flying, is restricted to microlights.

I am a little puzzled by your comment about having taken an NPPL(M) while grounded. Do you mean “differences” training or the full NPPL(M) training course?

To the best of my knowledge, you do not need to do a full NPPL(M) course if you already hold a PPL or LAPL. You just need to do a few hours of “differences” training and then, I believe, maintain a minimum number of hours on microlights over a given period to maintain currency on them.

If your current grounding is due to a current lack of funds to cover medical follow-ups or understandable reluctance to part with a four-figure sum (been there, done it...three times!) to get your Class 2 reinstated, then I sympathise with your predicament. I am not an AME but would advise caution there.

IF this is your current predicament, it might be advisable (if your GP can’t give you an NHS referral or you want to avoid delay) to bite the financial bullet and get the tests done rather than leaving your medical condition in a questionable state. You can then take things from there once the results are in, results which would hopefully be positive, would put your mind at ease and, with Class 2 reinstated, give you the maximum number of options regarding your future flying and licensing etc.

By Irv Lee -  Sat May 04, 2019 10:01 am
Like
Sat May 04, 2019 10:01 am #1691591
STOP listening to AMEs (in general) giving licensing advice! There must have been some magazine article or conference this year that has given them some very dodgy knowledge on that topic.
Irv Lee - (R/T & Flight Examiner)
Deconfusion & Preflight Aide-Memoire: http://tinyurl.com/pilotpal
UK GA Twittering not Tw@ering: @irvleeuk

Irv Lee wrote:STOP listening to AMEs (in general) giving licensing advice! There must have been some magazine article or conference this year that has given them some very dodgy knowledge on that topic.

Surely, you’re not suggesting, Irv, that even AME’s get confused?

Been there and I’m feeling even better now!

My reason for taking the NPPL(M) was that I had a PPL with a medical until December but had been grounded by my AME when my blood sugar went up (diabetes 2). I didn't realise that that I could use my PPL with a self-declared medical so took the NPPL and self-declared so I could carry on flying that way.

Now I'm going to take your advice and use the PPL with a self-declared certificate.

New question: Do you think I can use the self-declared certificate I got for the NPPL for both the NPPL and the PPL or do I need two? If I need two, it doesn't seem to have an option for EU part-FCL PPL to fly EASA aircraft (image attached of my existing NPPL self declared medical) 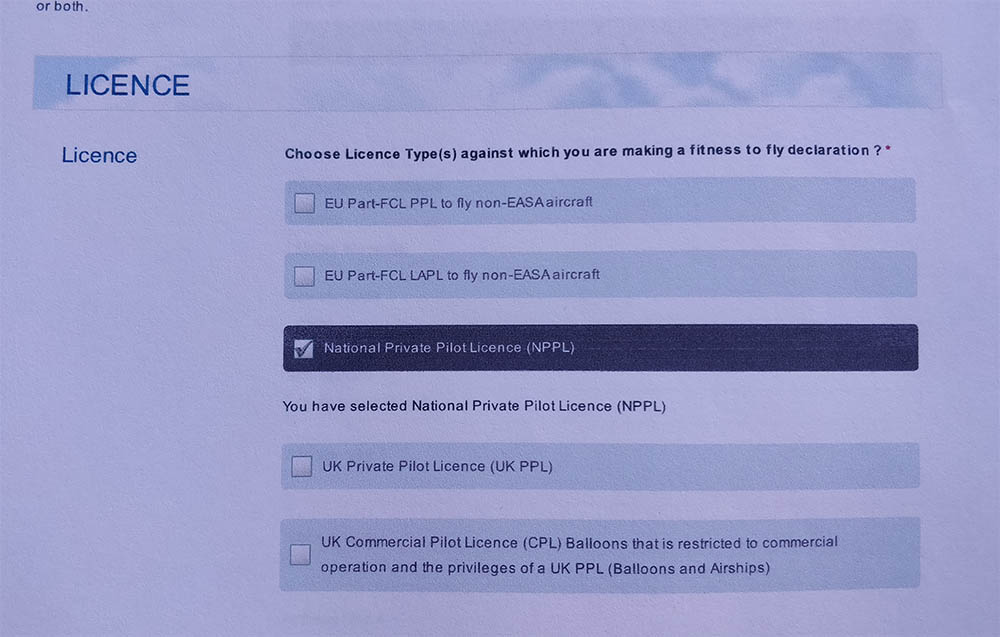