by Wicksay
Looking for some common sense and inspiration for when the day comes. What was your first solo trip after you received your PPLicence?

by Jim Jones
My first solo was a local bimble to the coast and back, revelling in the self reliance.

First big trip was to Duxford with non pilot passengers. An ambition I’d had for 25 years.

by PeterMa
Mine was with Father ( a long standing pilot ) and another pilot friend - so no pressure there ! but I did see it as a chance to have some help if things weren't quite right .

Turned out we fouled a plug at Sandown , I cleared it , but did get the offer of one of them flying it back - I declined on the basis & understanding if things went wrong I'd happily give over control if ' I have control' was shouted

I still loved every second of it

by Dodo
I learned on a C152 in 1992 and while I was waiting (ages and ages and ages) for my licence to arrive had an hour's dual to convert onto a PA28.

First P1 flight after licence arrival was a local (Shoreham to Shoreham) in the same PA28.

I then barely flew for 6 months as I had spent all my money getting the licence!

by Charles Hunt
Local and a few circuits.

Good advice on here has been 'only do one thing new at a time.' Do a couple of trips to a nice destination (Sandown/Goodwood?) alone, then take a passenger or two - even that can make a difference if habitually you have stuff on the passenger seat when solo (for example.)

Do not set off four up into a low cloud base over high ground into an unfamiliar strip 350m long.

(Are you Sussex based and not too heavy? Come and have a sit in the back of KATI)

by johnm
My first trip was to take MrsJohnm to Bembridge as a rehearsal for our first trip to Alderney.

by TopCat
Mine was a local flight practising circuits and a short navex.

Then 10 days later I went from Goodwood to Denham and back with a student pilot friend.

I remember it well, as it was 1992 - pre-internet - and the only weather forecast available was the old faxes pinned to the planning room wall. It was a perfect day, fair weather Cu, warm, light winds, and I'd spent a long time planning. Then two guys came into the planning room, saying things like "not sure I'm going to fly today, I don't like the look of the weather".

Which prompted much further checking of the available TAFs, etc., in case I'd missed anything.

by Uptimist
Went out by myself, buzzed the white cliffs of Dover and went home again. Always wanted to do that! In a PA28 though, not a Spitfire.

My first trip was a ten minute flight of three touch and goes.

New type Archer II - I had learned on a 172 - flew an hour dual in a PA38 but other than that there were no airplanes here so bought my own.

In 2014 to 2017 my airplane was back in the US - don't ask - so no flying other than goes to US for BFR in 2016 - flew it back to Barbados from Ft Lauderdale Executive 13 hobbs hours including St Croix to Barbados direct . First solo in three years - Ft.L to Stella Maris - oddly after a three year break I found I was a much more relaxed and proficient pilot - that was weird - my only flying other than the BFR was playing War Thunder!

I now fly it out of Canefield in Dominica.

by Wicksay
Thanks for sharing your first post ppl solo trips.

I'm really looking forward to mine whatever and wherever it might be. I'm aiming for early next year.

by Cessna571
My first flight after passing was a single circuit with my wife, looking back on it, it was more for me than her.

I wanted to show her how fabulous flying is, but she was very nervous before we took off, our original plan was a touch and go, then a local, on downwind she said “nope, just land”.

That was three and a half years ago, we’ve not flown together since, and it took me a while to stop asking her if she wanted to, then on holiday this year she said “can we go flying when we get back”, she’s asked to fly to the Shuttleworth Collection!

After that I think I went for a local tour as I’d moved airfields, the weird bit isn’t your first flight, it’s your first solo planning, sitting down with a map, thinking “where shall we go today”, and not having to check with anyone.

Changing your plan whilst flying is good too, This happened to me...
“What’s that over there?”
“Newmarket”
“That’s very interesting”
“Let’s go have a look shall we”
“woah, if we go over there shouldn’t you have filed that in your flightplan”
“

you mean we can fly wherever we like”
“yep, nearly”

by kingbing
Mine was a fairly short 30 mile hop to Duxford - the same airfield i did my first solo landing away (though different start airfield). Really nice just to enjoy feeling alone and in charge but to somewhere familiar and not too challenging too. though wind was about 25kts, happily down the runway. Ground speed home was 49kts. Felt peculiar to be overtaken by cars on a parallel road below.

by Ridders
Wiksay, Because I had a share in a very nice Cessna 150, I ended up flying to quite a few places with fellow group members, one flying one way, one the other. Cost sharing but most importantly I learnt so much from flying with other pilots, something I continue to do, to this day.

My first land away was Sandown - I was pretty happy to have landed there and (incredibly) it was my first landing on Grass.

I then went to Popham with another pilot and I leant the difference between QNH and QFE....having learnt in the US where QFE is unheard of and flown from shoreham where both are same.

My third land away was a little more exciting - at Bembridge

I managed to land on the hard runway, proceed to get blown off the runway avoiding the lights, head down the grass parallel to the runway and then back onto the runway, hoping no one noticed

The helpful A/G suggested I could backtrack the runway or the grass however I wanted, to parking

Both landings I wouldn’t forget - at 56 hrs I had a lot still to learn - and I still do.

Wherever you end up, solo or with passengers or fellow pilots, just enjoy it. Here’s what I wrote in my logbook, I was pretty happy 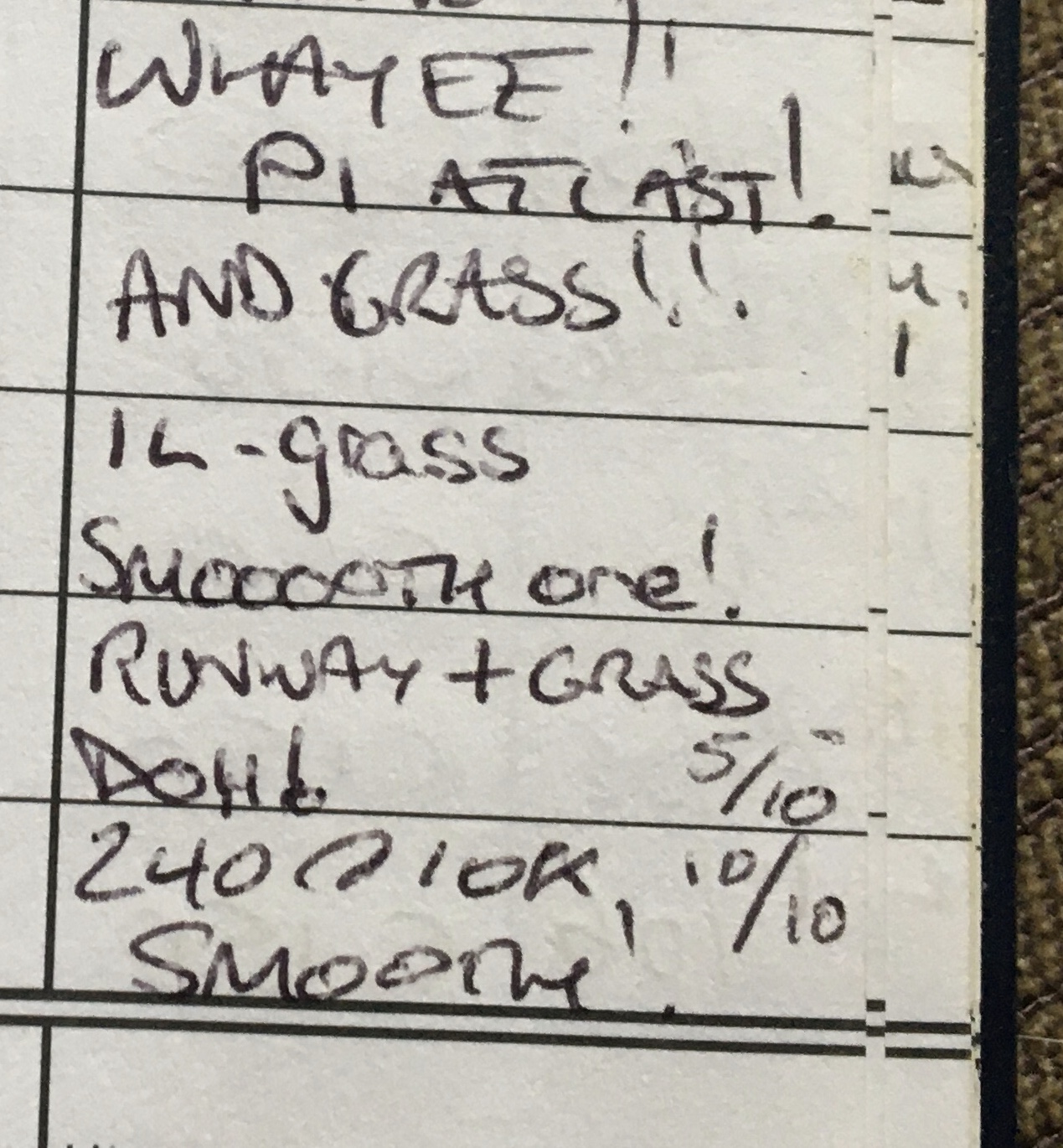 by riverrock
First couple of flights after passing my skills test were local NAVs, signed out by an instructor, waiting for my licence, trying to tighten up on some of my skills.
First trip away was to Castle Kennedy Fly-in with another pilot beside me.
He flew in, I flew back.
Most of my training was at a controlled field (although we had been in there before during training when we were the only aircraft for miles around), so having 4 aircraft in the circuit doing overhead joins, no ATC, then just after we landed next aircraft decided the wind had changed so would approach in the opposite direction, was an interesting experience with eyes on stalks.
We had great fun rating the various landings of others (or not as a 172 went round 3 times).

They were filming Memphis Belle, (The second one, not the 1940s version

) and I asked the CFI to sign me off for an overhead Duxford - from Wellesbourne - so that I could watch the B17s recovering to their base for the night. It was a blissful evening and to watch four B17s from above was a unique experience.

I felt a very grown-up pilot, landing back at a virtually deserted Wellesbourne at 2045 local, locking up the aircraft and slipping the keys through the club letterbox with a note of my times.