By akg1486 -  Wed Jul 31, 2019 12:50 pm
Like 2
Wed Jul 31, 2019 12:50 pm #1709606
This summer, our club arranged the 15th annual multi-day European trip and I'm quite proud to say that I've been one of the organizers every single year. I've also joined the trip every year but one. It's been a way to enjoy our hobby, and also to introduce new pilots to the delights of leaving the traffic pattern and the familiar, most immediate, surroundings. Travelling in a group with other pilots is very much easier than trying to make a similar trip with only non-pilot friends and family. Not knowing for sure where you'll end up is an extra spice to the holiday.

When we started all those years ago, we stayed away two nights. That increased to three and then to four, which is what we aim for nowadays. How far you get depends on how much you fly per day (we found that more than two legs would be a stretch) and how long the legs are, but this year we were pretty ambitious: to fly from Gothenburg, Sweden, to Jersey in two days, hop over to the UK for a day and a night and then fly back over two days. As so often happens, we managed to stick to the plan for the first two days and then improvise.

The crew is getting ready to leave: 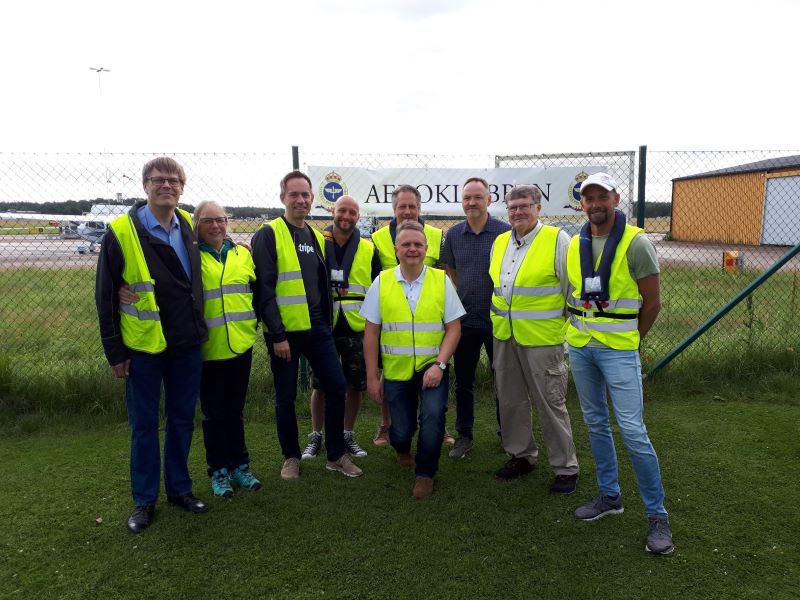 Planning to travel the Dutch and German coastline on the way back, we opted for Bonn-Hangelar as our first night stop, possibly including a train trip to Cologne. The plan for day two was to cross Belgium between the many control zones, refuel and do customs at Albert Bray and reach Jersey early afternoon on day two. And we managed, more or less, to do that.

The first leg was to Flensburg where we planned to refuel and eat. We got slightly delayed in the morning due to some low clouds, but once airborne we could climb high above a layer of stratus clouds. The forecasts (correctly) said they would clear up in southern Denmark and northern Germany in a few hours. On the way there, we enjoyed a very smooth ride at 6,500 feet: 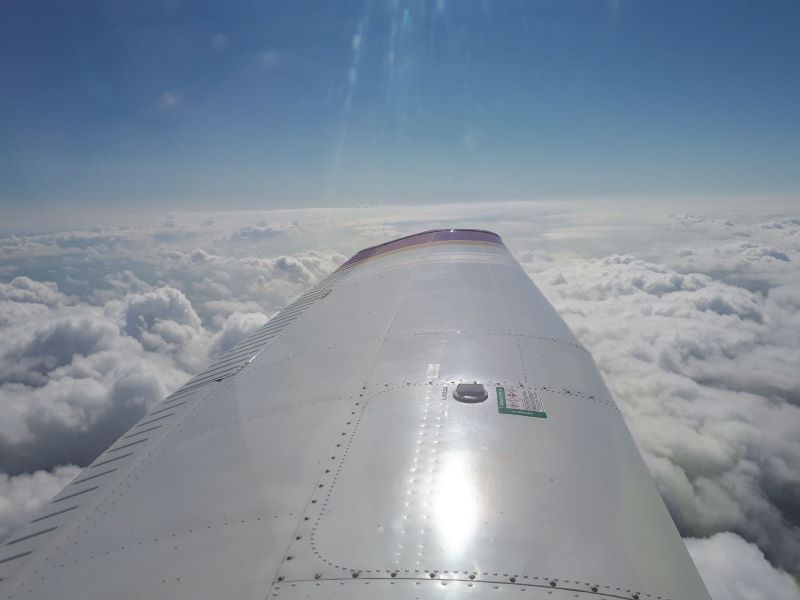 The restaurant on the airfield turned out to be closed Tuesdays, so we had to take a 20 minute walk to the shopping centre. But it was sunny and not too hot, so why not? Continuing on the second leg we found the weather further south considerably worse, but stayed below it at 2,500 feet in visibility that went from good to passable to not really good at all (while still legal VFR). With only a half-hour remaining to our destination, the ground rose but the clouds stayed. Given excellent advice from Langen Information, we turned 90 degrees to the right, rounded Dortmund control zone and then went south again around Cologne. The ground there was very much lower and we had a safe passage, albeit a longer leg than we had planned: a bit over three hours instead of two hours and a half. But we had plenty of fuel. And once we landed, the weather turned really nice again: 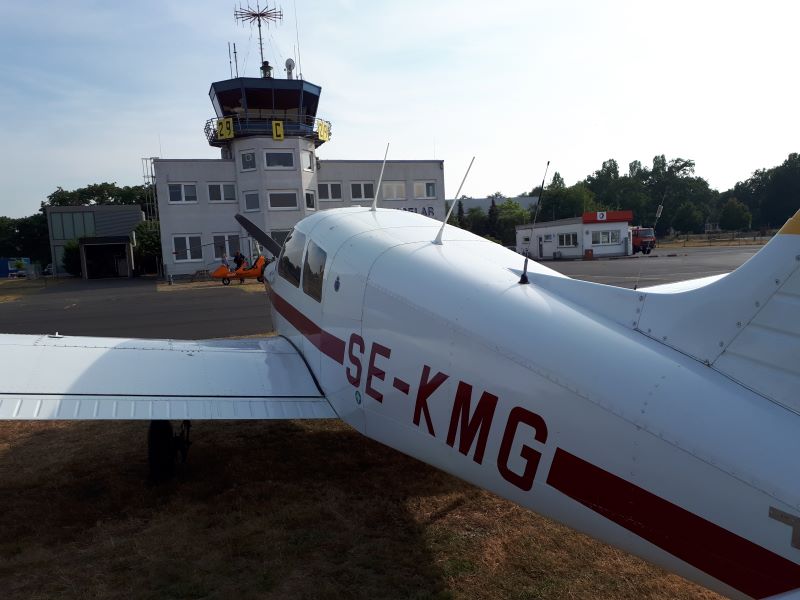 One of the three aircraft in our little fleet had opted to go on top. It became clear to them after half the leg that there were no forecasted openings in the clouds further south so they backtracked, found a hole and landed at Ganderkesee to refuel. Because of that, they were more than an hour behind the rest so we had to skip the trip to Cologne and stay in the Bonn suburb of Hangelar. Which was not bad: a nice hotel, a family-run restaurant and the excitement of starting the trip were enough to make us sleep very well.

The next morning, there was local morning mist around Bonn/Cologne/Aachen and in parts of Belgium. Nothing to do but wait and explore the very busy little GA airfield. They had an ingenious solution to get the most of the limited space in the hangar: 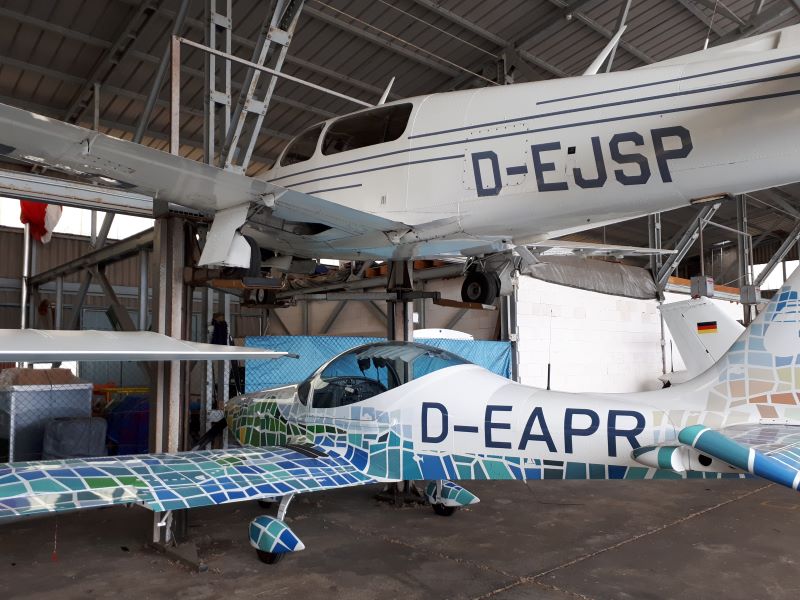 Eventually, after pushing the FPL several times, it cleared a little bit and we could leave in some 6k visibility. As we went, it opened up and we got a nice view of the Belgian countryside: 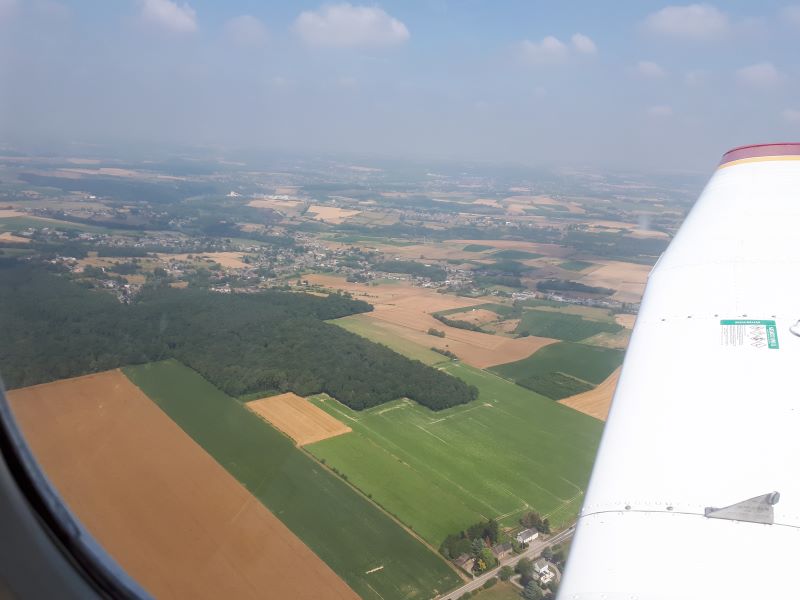 Albert Bray has a long runway in the middle of nowhere, sometimes serving Belugas transporting noses for Airbus. When we were there, there was only sunshine and pleasant staff helping us with customs. You need to register on their web site twelve hours in advance, but there were no questions about why we were several hours late.

The next leg, to Jersey, took us just outside Omaha beach. It's incredible to imagine landing on the Normandie beaches and try to climb the (very) steep hills while being shot at. I'm in the post-war generation but I feel grateful to what's often called "the greatest generation". 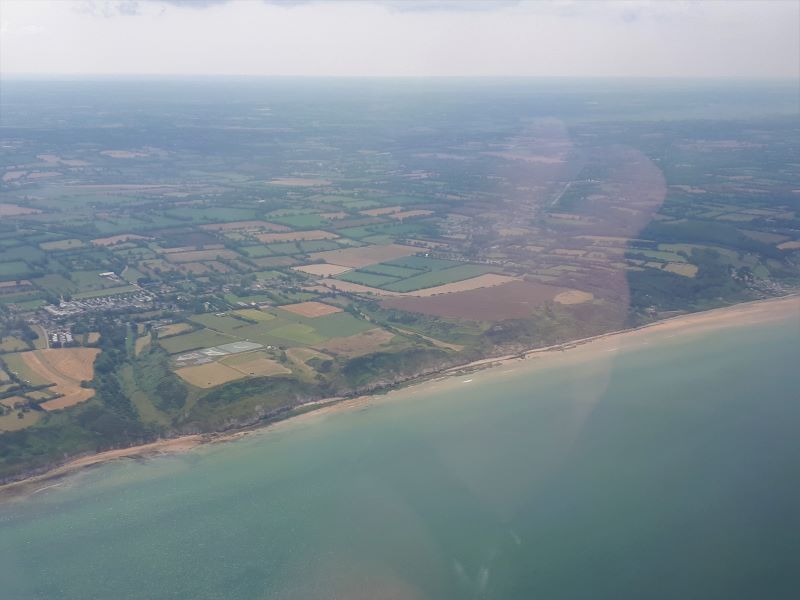 The morning's delay meant a later arrival in Jersey than planned, so we pretty much only had time to find a hotel and get something to eat. And to look at weather forecasts: a front was coming in over Europe, hitting the UK first, so crossing the channel did not seem to be a good option. The forecast also said that while we might be able to leave Jersey, that wouldn't happen until the afternoon. So where to go? Somewhere not too far, but with customs. It turned out that Deauville was the only place that fit the bill and didn't require 24 hour notice. (Flying in the Schengen area is so easy in this regard!)

The next morning we woke up to the forecasted rain. So what better to do than stay underground and visit the Jersey War Tunnels? A few hours in this (excellent) museum and the weather was much improved: few/scattered at 1,500 and then nothing. At the airport I finally managed to meet @derekf who took time off from work to come out to say hello. Much appreciated! 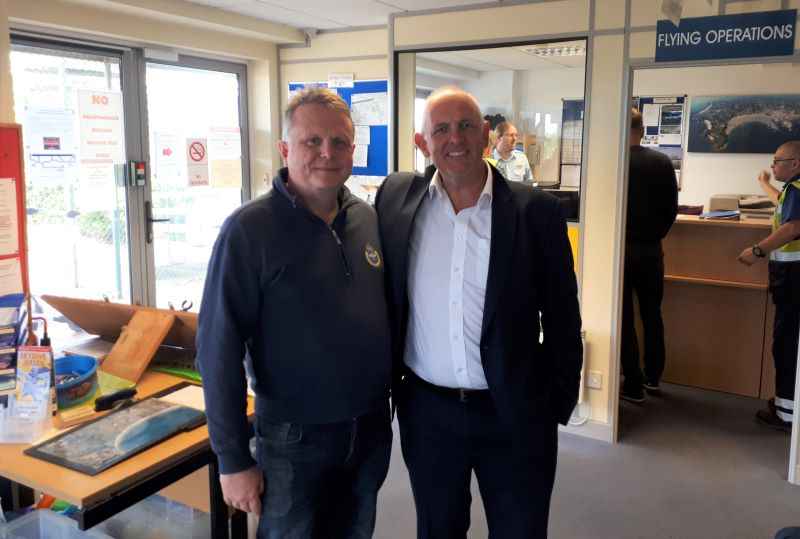 Deauville might have been our only option, but what a great option it was: a nice town with a food market and plenty of seafood restaurants: 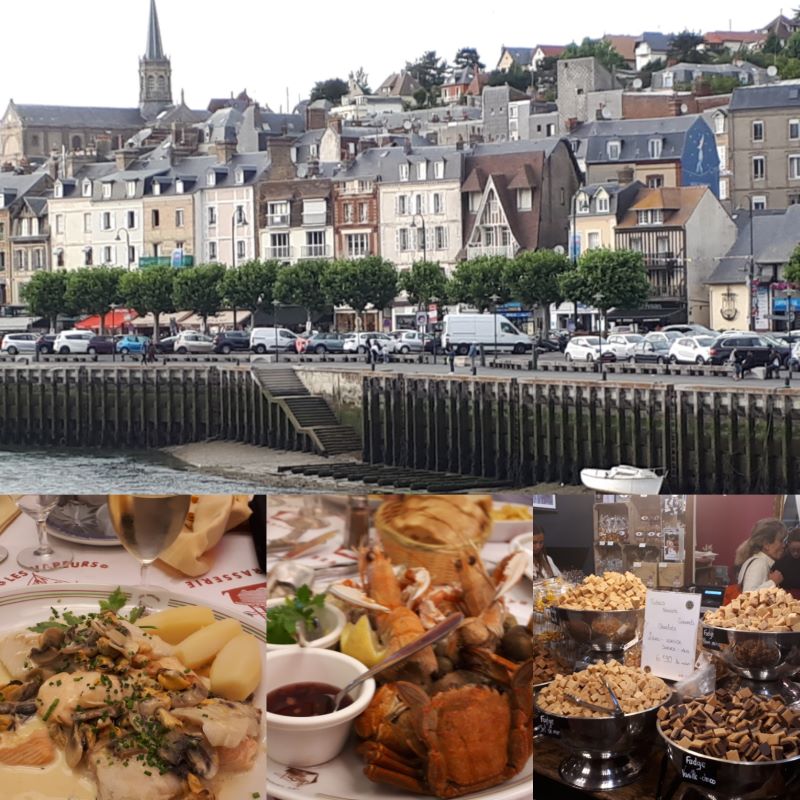 After dinner, we looked at the weather charts again. If we went enough to the east we should stay ahead of the front and be able to fly home as planned. We could have more or less backtracked but chose to have fuel/lunch in Breda/Seppe and then try a small airfield not far from Hannover called Celle-Arloh. Before arriving in Breda we passed over the port of Antwerp: 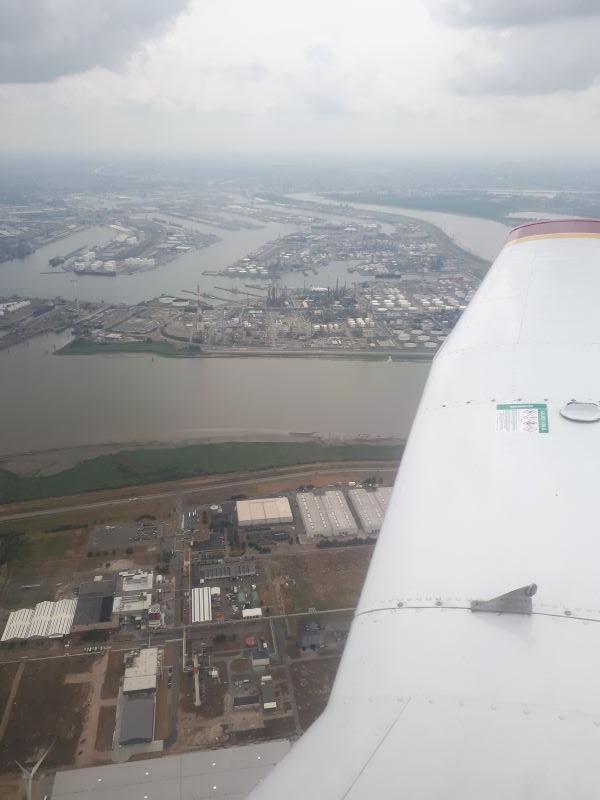 We got a warm welcome in Celle-Arloh, although they told us we should have called first. Before leaving the airfield, we took a picture of the squishy toy aircraft they gave us at Breda: submitting that photo may win you a free landing! 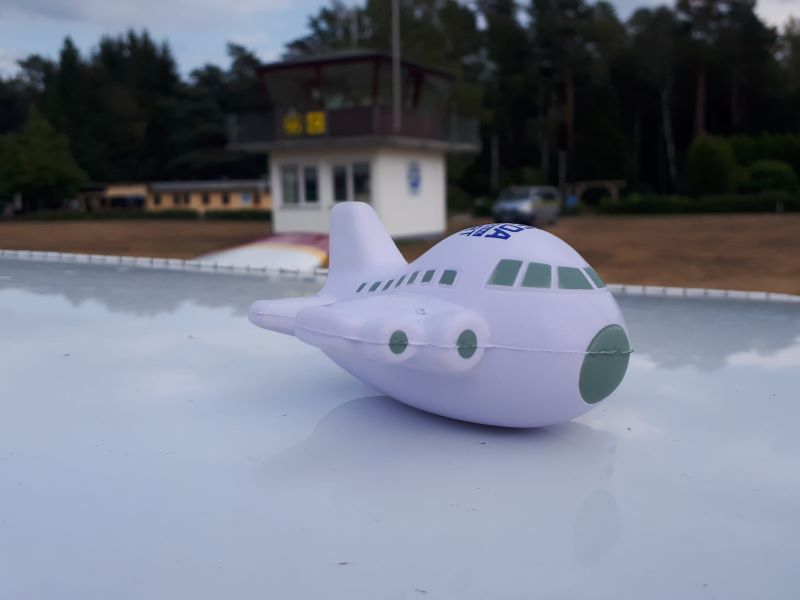 Celle was an unknown entity to me, but I've learned over the years that small German towns rarely disappoint. Walking back from a very German dinner we passed a park where a classical concert was just winding down: listening to a choir from Aida in the warm summer evening was a magical moment.

Not much left to say, really: the final day we flew home via a fuel/lunch stop in Roskilde, Denmark. That part of the world is now so familiar to many of us that it almost feels like a local bimble.

Lining up to leave Celle-Arloh:

Arriving at our home base within a few minutes of each other, courtesy of the Swedavia radar service: 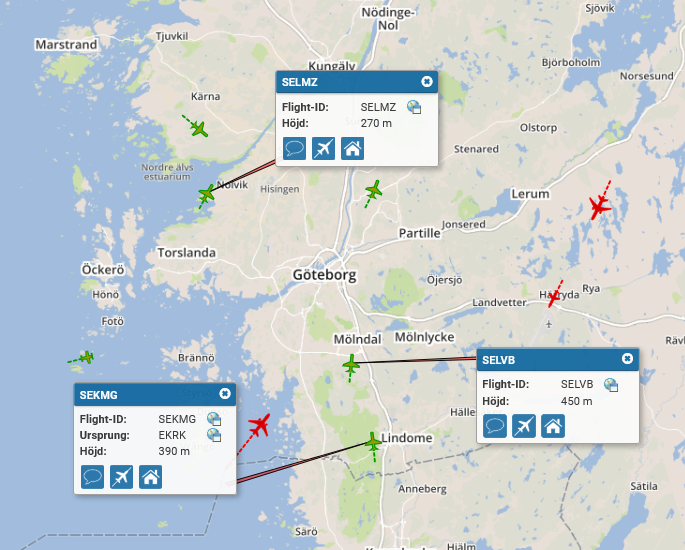 Will we go again next year? You betcha!
nallen, derekf liked this
Autocorrect is so frustrating. It's always making me say things I didn't Nintendo.

my son lives very close so thinking of visiting!
there are two sorts of people
those that can extrapolate from incomplete data . . .
Mike McP

mmcp42 wrote:nice report!
are you based at Landvetter?
is there AvGas there?

my son lives very close so thinking of visiting!

No, we're based at ESGP Gothenburg/Säve some 15k from the city. There's Avgas available. Check Skydemon for info on PPR etc.
mmcp42 liked this
Autocorrect is so frustrating. It's always making me say things I didn't Nintendo.