avtur3 wrote:
We need to get the young people that Propwash refers to out into the environment that Kanga refers to, to show them that there are other options. Easy to say .... incredibly difficult to do.

We need to do much, much more, especially in challenging those in positions of influence and responsibility who, for their own agendas, offer tacit support to those involved in gangs and violence through their constant obstruction, criticism and hostility to those who are striving to tackle it, often at some personal risk. The list is long and growing, including some elected officials who should be ashamed of themselves. One of my preferred solutions would be to demand that they are forced to deliver the heart-breaking news of yet another young death to the devastated mother so that they might have to confront the reality of the situation they are in part responsible for fostering.

Watching a field full of lambs playing 'I'm the king of the castle' followed by a game of chase.

A magnolia tree in full flower.

Watching and listening to the crowd at a cricket match in the Caribbean.

Fresh fruit eaten as close to its tree of origin as possible.

A walk through a pine forest when the sun has warmed the trees.

Sitting by an open fire (indoors or outdoors), listening to the wood crackling.

The cold mountain air you just have to take a deep breath of (preferably early in the morning in the Alps).

Ahhhh. Feel better for thinking of the above. Thanks, @ROG
JAFO, Paultheparaglider liked this

Watching and listening to the crowd at a cricket match in the Caribbean.

Presumably more diverting than the activity on the pitch?
Suiting the action to the words

By Propwash -  Sat Feb 20, 2021 9:53 am
Like 1
Sat Feb 20, 2021 9:53 am #1827728
I have often been to cricket grounds in the Caribbean to support England, and sadly the number of locals in the ground is now a pale memory of how many used to attend test matches in the heady days of West Indian dominance. Without the always reliable travelling English support, both Barmy Army and tour groups, the grounds would be near empty. Those who do turn up, however, are always interesting to watch; they usually display the full spectrum of human emotions within the same over. They live every second of the match.

Sadly, I have also been to test matches in several other parts of the world where English travelling support easily outnumbers local crowds. It seems only Australia and England still routinely attract large crowds for tests.

I've heard massive arguments break out between friends about local politics or the standard of driving, such that you'd think they were about to come to blows (never do). It's hilarious to hear the passion, the wit and the laughter.
I've seen the manual scoreboard be neglected at the end of overs to the point when the public address had to be made to remind the guy and the crowd erupted into laughter.

I've seen the world's biggest lunch being eaten over the course of several hours.

I've sat behind a supporter of the visiting island team who leapt to his feet, waving a flag, EVERY TIME his batsman hit the ball.

Funniest of all? I heard an Englishman trying to explain cricket to a Canadian who had seen it once in Midsomer murders.

T6Harvard wrote:Cricket crowds in the Caribbean,.. I heard an Englishman trying to explain cricket to a Canadian who had seen it once in Midsomer murders.

While an undergraduate at Cambridge I was a volunteer city guide (before there were professionals doing it for paying coach parties! It was a long time ago ..

) for the British Council. Their usual groups were of BC-sponsored students at other UK universities or analogous establishements, from all over the world, usually with excellent English. However I once guided a party of senior executives of national banks who were attending a conference at the Bank of England. As was common the coach driver tagged along. One banker was from a francophone African nation with excellent and very cultured, Paris-accented, French, which was quite possibly his first language; but poorer English, so I was doing some of the spiel and answering his questions in French.

As we rounded the corner onto Parker's Piece we could see a cricket match was in progress.

I was about to try nervously to explain cricket (for which I have little enthusiasm and only basic knowledge) in French when the coach driver chipped in. He was of British Caribbaean origin, but reckoned he spoke (distinctly Caribbaean!) French, and was a cricket fanatic. He decided he should explain cricket to the banker, fluently rapidly with great enthusiasm and voluble gestures. I'm not sure that the banker acquired much pertinent information, but the other bankers (and I) loved the spectacle.

Propwash wrote:..
We need to do much, much more, especially in challenging those in positions of influence and responsibility who, ..

.. and maybe, also those Ministers who decided that austerity required massive or total cuts of nationally-funded schemes like Sure Start, and of local authority grants which allowed for things like youth clubs, youth leaders, playing fields, .. ? And abolition of nationally set, scientifically grounded, nutritional standards for school midday meals; instead requiring (under threat of personal surcharges, and civil or criminal prosecution) Councillors and Governors to put meals service out to tender, and always to accept lowest bidders ? I wonder if some of those lost things now look like good value for money for wider society

A magnolia tree in full flower.

Ahhhh. Feel better for thinking of the above. Thanks, @ROG 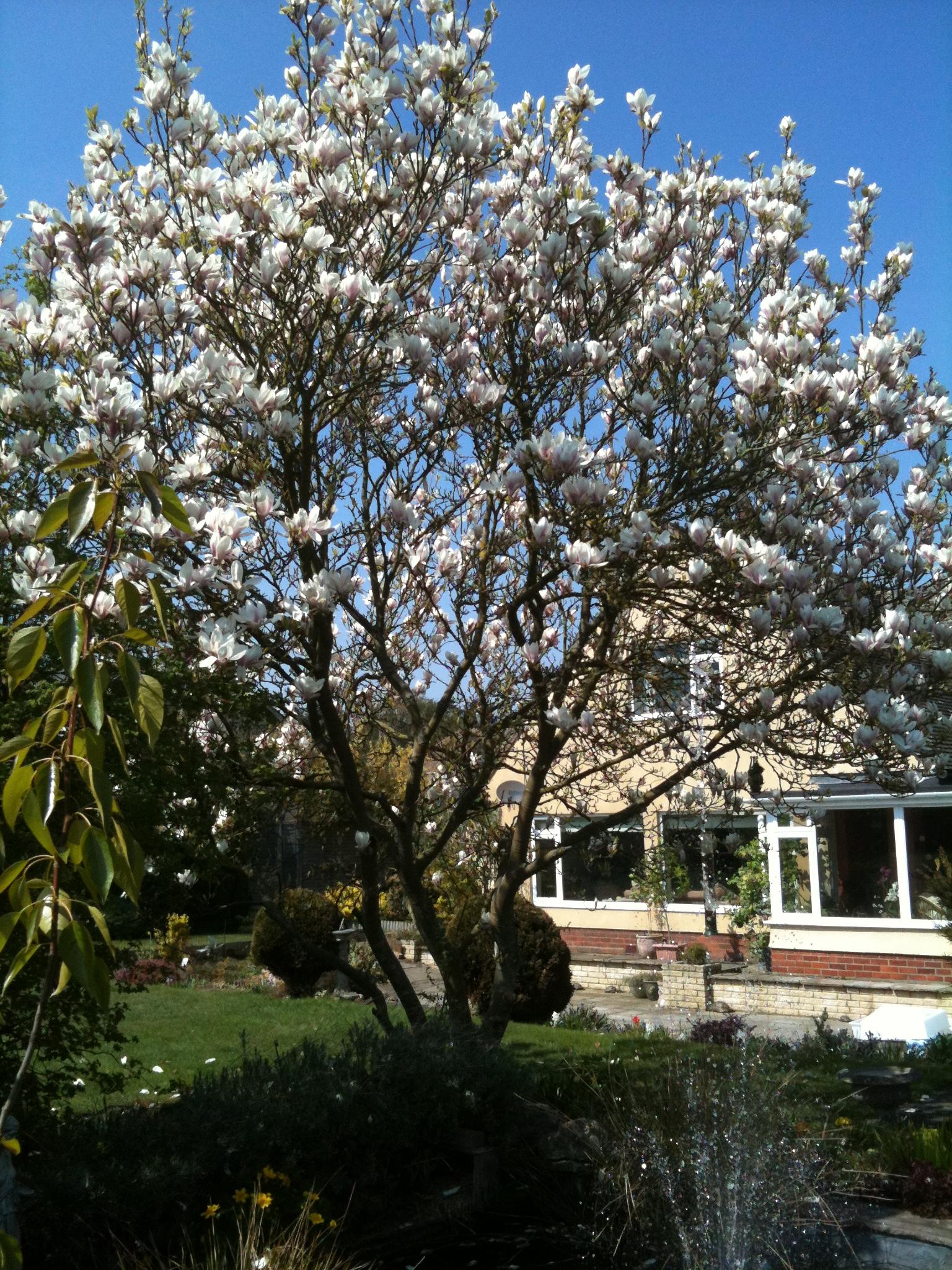 We had a gorgeous magnolia in the garden of our old house before it was all knocked down for our retirement pad.

Sadly however in three years out of five the late frosts would get it and we’d end up with a ‘teabag’ tree.

Cricket at its most basic is a very simple game - see ball, hit ball. It is probably also the most complicated in terms of strategy, tactics and variety of possible outcomes. The very old chestnut about Americans asking how a match can last 5 whole days and still not have a winner does hold a kernel of truth. It is the amount of match ups within the match - a bowler who has the clear wood over a particular batsman and how that batsman changes his game to compensate; a captain who devises unusual field settings to execute a clever plan against particular players; spectacular agility by some talented and committed fielders altering the course of the game. Those who really understand cricket derive great enjoyment from all that, those who don't tend to resort to derision because they only crave non-stop action of the sort other sports, the matches of which last a paltry 80 or 90 minutes, provide for them. It is a matter of personal choice.

And no other mainstream sport, with the possible exception of tennis and single events like Henley, provides the same social activity involving good food and champagne!

@kanga Responding to your last post would of necessity involve straying into the forbidden zone of politics, so I won't. Those politicians to whom I referred as being cynically obstructive of effective measures to reduce gang violence for their own ends cross party divides. Some of them are surprising at first glance, but my disgust with them is none the less for that.

I prefer the smell of bread baking.

Ah yes, I've done that once!

And all the other things.

Propwash wrote:T20 has a lot to answer for.

Does it? Do you think people would go to test matches if it weren't for T20? I went to a T20 IPL game in Cape Town once. The final score was a draw, same number of runs, so they played extra time!

T6Harvard wrote:Funniest of all? I heard an Englishman trying to explain cricket to a Canadian who had seen it once in Midsomer murders.

When a man goes out to go in, the men who are out try to get him out, and when he is out he goes in and the next man in goes out and goes in. There are two men called umpires who stay all out all the time and they decide when the men who are in are out.

I was fielding at third man or fine leg (right on the boundary) when a late-middle-aged bloke and his wife approached me. In a broad US accent he simply said: “so this is cricket, right? What’s it all about?”

The next few minutes were hilarious as I tried to explain, and he got more and more confused. Thankfully I was able to move the next over, and he ended up with another of my team mates. They stuck around and at tea we showed him the tea towel that I think hangs in most club cricket pavilions across the country. Needless to say I don’t made things any clearer for them! 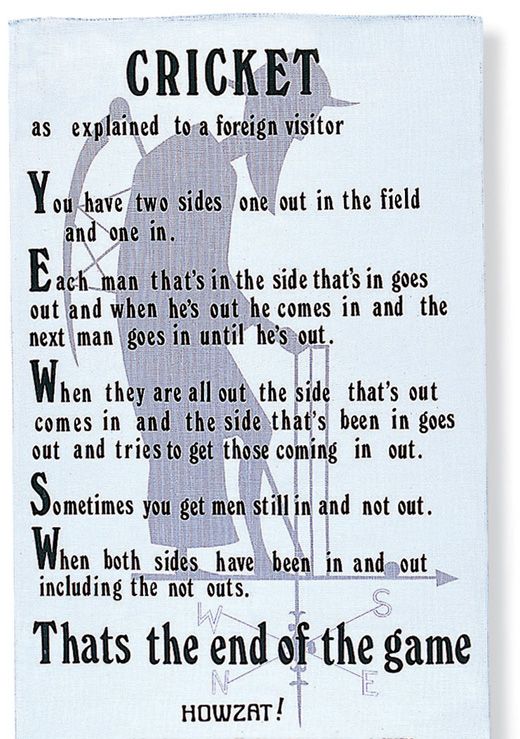 ... It is, however, disappointing to read that abuse is being directed by their elders .. at youngsters (of all political views) who take the trouble to engage through the proper democratic paths:

I welcome this encouragement of Parties contesting this year's Senedd elections to engage with younger voters. 16-17yo's will be able to vote for the first time.

By GrahamB -  Mon Feb 22, 2021 12:30 pm
Like 3
Mon Feb 22, 2021 12:30 pm #1828131
Whilst it’s not a bad thing that youngsters should be encouraged to take an interest in such things, I personally think it’s a cynical move by the Wales government to garner votes, as they know that youngsters are likely to be more idealistically left-leaning.
Paul_Sengupta, Charles Hunt, seanxair liked this
GrahamB

GrahamB wrote:Whilst it’s not a bad thing that youngsters should be encouraged to take an interest in such things, I personally think it’s a cynical move by the Wales government to garner votes, as they know that youngsters are likely to be more idealistically left-leaning.

I was drawing no conclusion, nor advancing any ideas, about why the Senedd voted to extend the franchise in this way. Perhaps (like me

) MSs actually thought it was the right thing to do; but perhaps I am also less cynical about political motives than others! In any case, my political history nerdery suggests to me that those who might be simplistically expected to benefit from an extension of the franchise often seem not to, or not for long

But what I was specifically welcoming was the non-Partisan initiative by others in the 'public space' to encourage all Parties actively to engage with these new voters before the Senedd election.
T6Harvard liked this
(mere guide at) Jet Age Museum, Gloucestershire Airport
http://www.jetagemuseum.org/
TripAdvisor Excellence Award 2015
http://www.tripadvisor.co.uk/Attraction ... gland.html

Aldi rib eye steaks, washed down with a nice St Emilion. Plus, of course, wall to wall sunshine.