As a straight, white, British, male omnivore who gets pleasure from burning more than my fair share of fossil fuels, I can offend, be hated and criticized by just about everybody for something, yet all I am is me. Leave me alone and cause me no harm and I'll happily enjoy a quiet life. But challenge me, and I will stand my ground.

I still expect to be entitled to my opinion on whatever subject is on the table, and this is where it is all going wrong. I'm not "allowed" to say;
"trans is not a gender"
"London shouldn't have a Muslim Mayor"
"why isn't St Georges day a public holiday"

However changes will happen over time, it is called evolution, society should be allowed to evolve without having it forced upon us, nor our history changed. I will never admonish an 80 year old lady for using the word coloured, and I will always stand between her and the youth calling her a racist. Time will eventually solve the problem, and that will always be on the youths side.
Last edited by Sooty25 on Tue Feb 16, 2021 4:50 pm, edited 1 time in total.
Charles Hunt, seanxair, Spooky liked this
The quickest way to fall out with people is, discuss politics.

.. because other fabrics are better in the climate there ?

If that prompts no answers I'll add some letters from implicit crosslights, ..

as some Forumites have presumably worked out (and others, not cruciverbalists, will not have cared

.. the wordplay being that this can be heard as 'nought in Ss', ie S0S ie SOS

There are several other Torquemada and Ximenes gems

.. because other fabrics are better in the climate there ?

corrected
kanga liked this
The quickest way to fall out with people is, discuss politics.

Rob P wrote:You really need to have a strong constitution to listen to this half hour of gender-based bollox.

I'll not bother then, what's the gist of it? one line will do!
The quickest way to fall out with people is, discuss politics.

Queens as in 1950s queers. (We can apparently use that word now but it is better if you are one yourself, so forget I ever mentioned it)

All jokes aside, my daughter has a trans friend who has undergone severe bullying and general bad treatment. Her friend has undergone surgery and has built himself a new life and, as a hobby, has done an amazing restoration on a Triumph Spitfire while dealing with the rest of the consequences of his decisions. He's now settled into a job he's happy with and is, as far as I can tell, settled into his new life.

The lady in the dictionary program seems mostly to be complaining about how the various slang/language of the various groups have been appropriated by other groups and/or the rest of the population.

Cisgender is heteronormative (sp?) ie, the gender assigned at birth is not necessarily how the person identifies now. WTF?
Rob P liked this

By Pete L -  Thu Feb 18, 2021 4:03 pm
Like 5
Thu Feb 18, 2021 4:03 pm #1827268
The one person I knew reasonably well who went through this process did at some point regret it although on our last encounter seemed to have come to terms with their choice. Since they'd managed to live over half their expected lifespan without anyone noticing anything including having two kids, it did come as somewhat of a shock.

I am glad that some closer attention is being paid to the counselling before surgery and serious amounts of hormones are considered. Like any minority group, there is a strong desire to make it larger, and for a clinic to generate work they feel a vocation for.

For most of these alphabet issues I was comfortable with don't ask, don't tell. Non discriminatory, non disruptive and didn't allow impressionable minors to follow a path they might subsequently regret.
mikehallam, eltonioni, Colonel Panic and 2 others liked this
ISO 3103 compliant 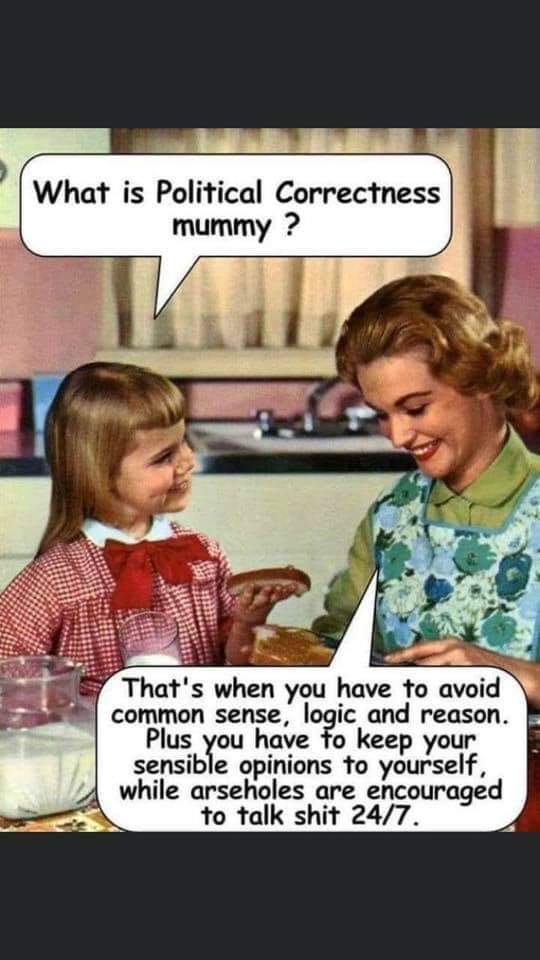 There may be some here who have flown into Kai Tak in Hong Kong. It is a memorable experience on many levels. Anyway, for the purposes of this story, the key aspect of this incredible airport is that is was very centrally located, and very close to my then girlfriend's apartment. So, she would come to the airport to greet me most times I returned from overseas.

One time I flew in, I decided to be a politically incorrect smartarse. So, as I walked in to the arrivals hall, I spotted she who I should have already known to obey but hadn't quite realised it yet, and walked straight on past without even a glance in her direction. She came over and asked why I hadn't seen her. My "clever" response was to tell her that all Chinese girls looked alike, and it was hard to pick her out in the crowd.

Next time I flew into Kai Tak, she made it clear she would be there to meet me. The flight was on time. I was through customs and immigration efficiently as usual. But, I couldn't see her anywhere. I searched everywhere for ages, and eventually found her hiding behind a pillar in the arrivals hall. She mumbled something about finding it hard to spot me because we white guys all looked alike.

I never tried that one again.