Harvesting arable crops generally happens between mid July and the middle of September, but they all get planted at quite different times.

Winter planted Oilseed Rape for example is planted in mid to late August (and grows for 11 months) whereas Spring planted barley is planted between March and April, and is therefore only growing for around four months.

I’m going to spend a year running through a field of winter wheat.

It can be planted as early as mid September, and as late as February. The upsides to earlier planting is generally a better yield per acre, whereas the downsides are that they cost more to grow because they need more weed and disease control because there’s more time for weeds and disease to compete with them.

Although many farmers do, I don’t cultivate at all, and I plant directly into the previous stubbles, taking care to make sure I grow a good mix of crops, and that I use break crops to allow soil borne pests and diseases to have a break in their life cycles.

Before planting, the field has an application of Glypbosate through a crop sprayer which creates a clean seedbed, and is the last chance to use a safe and non-selective herbicide before the crop is in the ground. I also apply about 5 tonnes of local chicken muck which provides a good source of potash and phosphate. 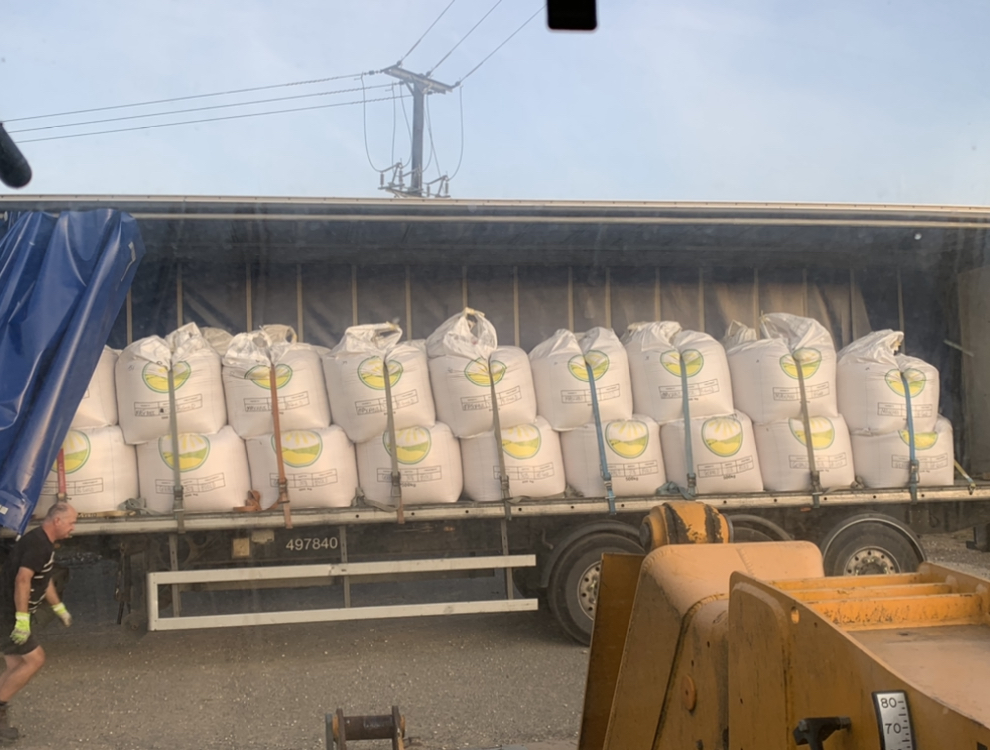 It gets loaded into the seed drill, and the application rate mechanism is calibrated. This particular shot is actually the photo from last year, hence it’s oats in the hopper, but you can get the drift. 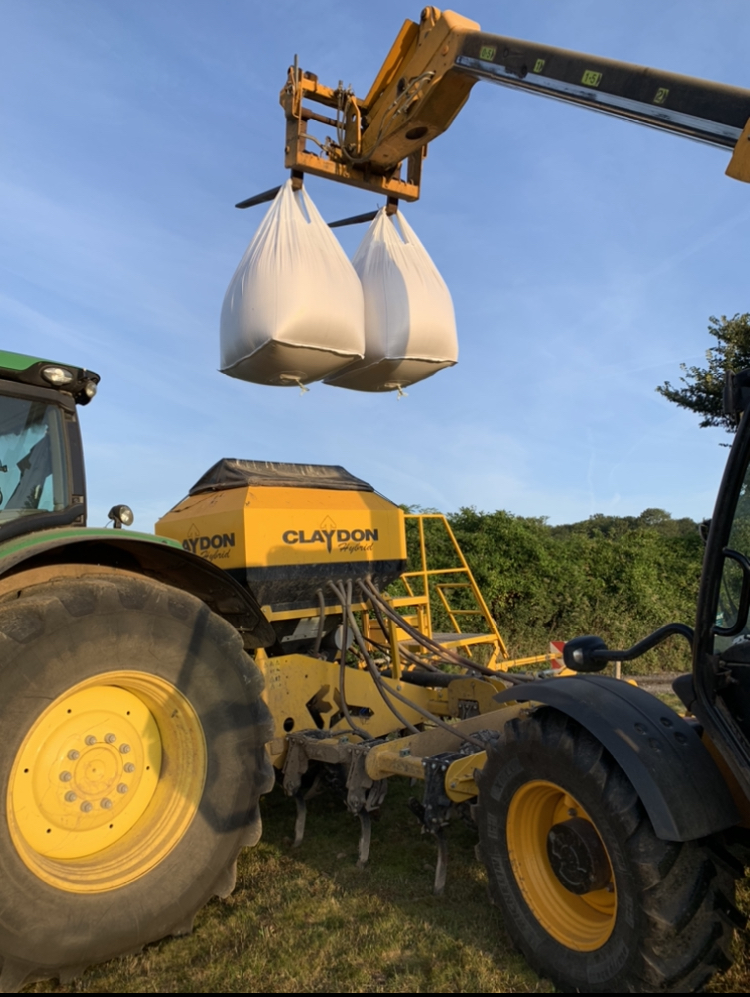 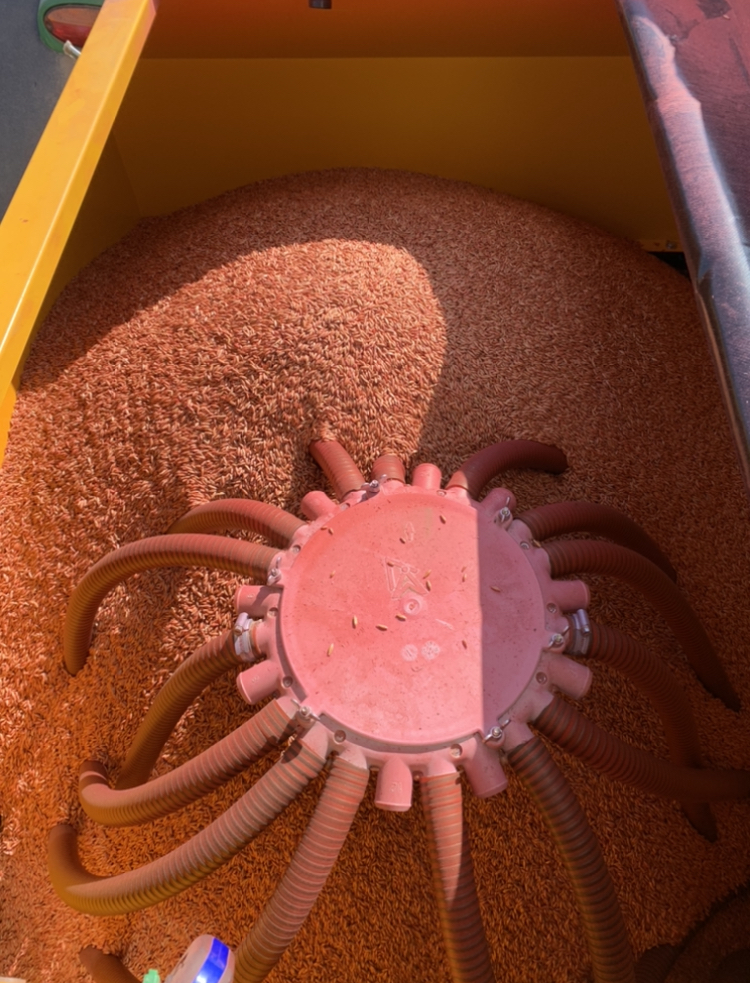 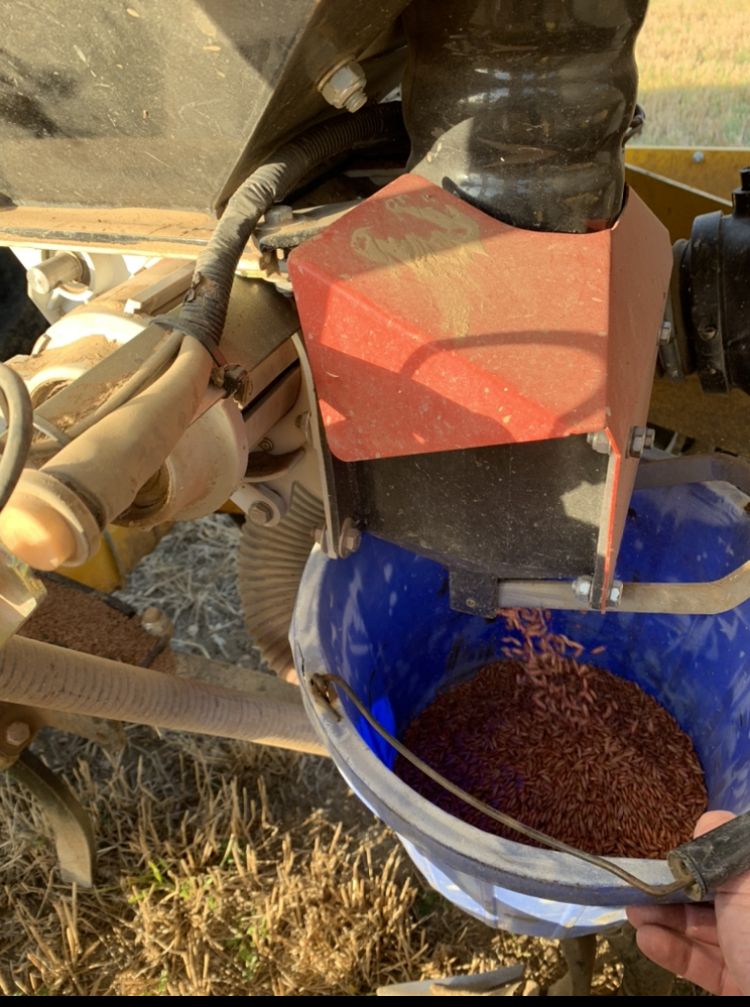 The drill will auto adjust the rate at different speeds, so once you’ve told it you want to do 160 kgs per hectare, that’s what it’ll do at any speed (within reason). 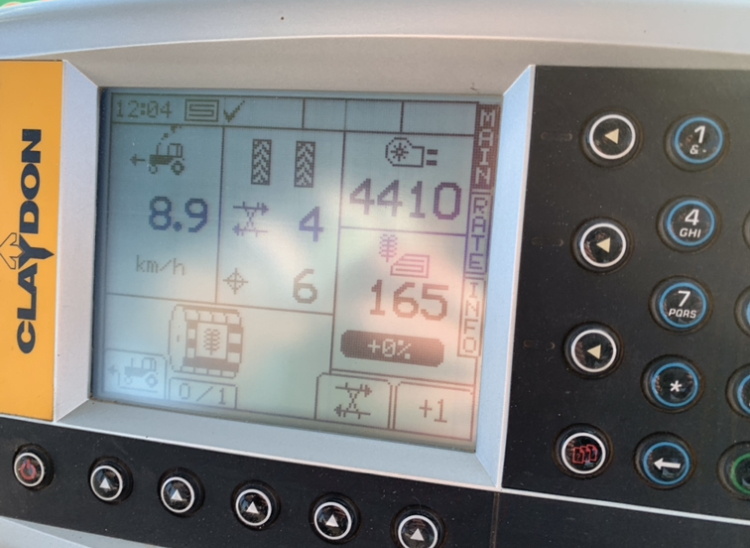 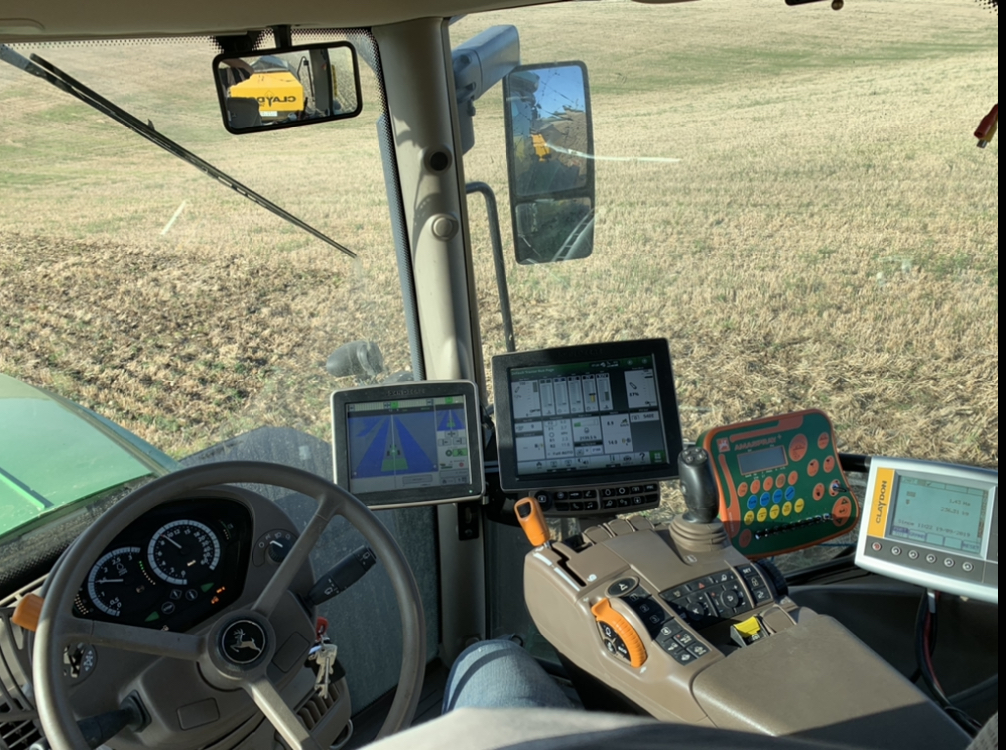 This particular seed drill cultivates the ground just in front of the seeding boot. This means I don’t need ploughs, cultivators, or any post-harvest work at all. I just plant straight into the stubble. 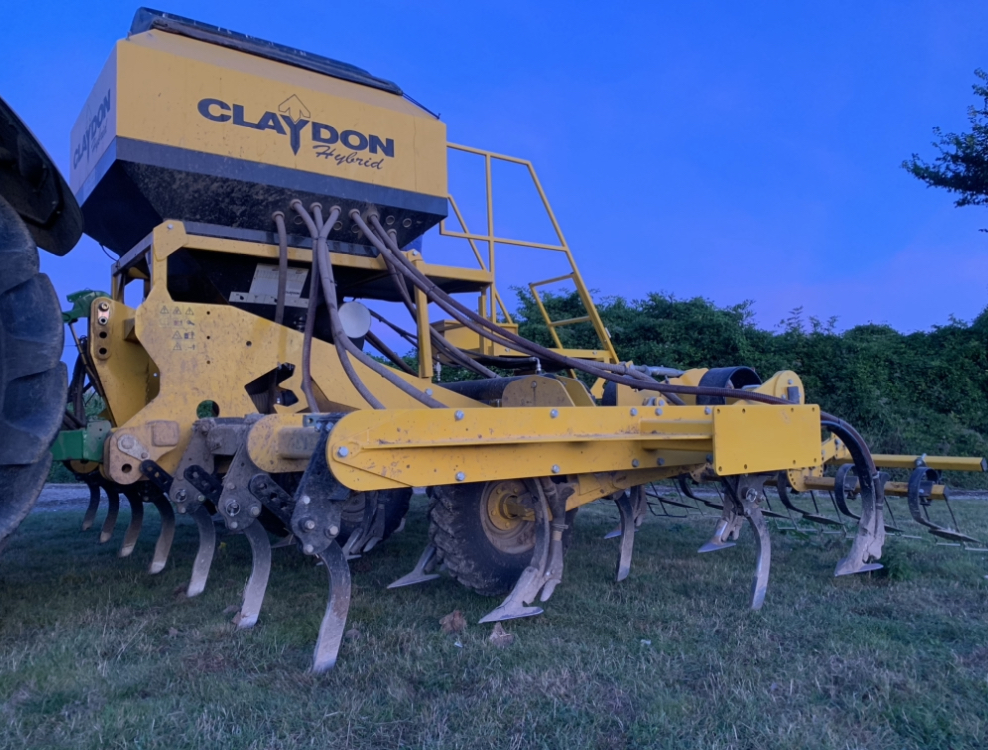 The seed boots wear white quickly on my stoney soil as you can see. This is just one day of use. They’re about £18 each, and there are 15 on my drill. 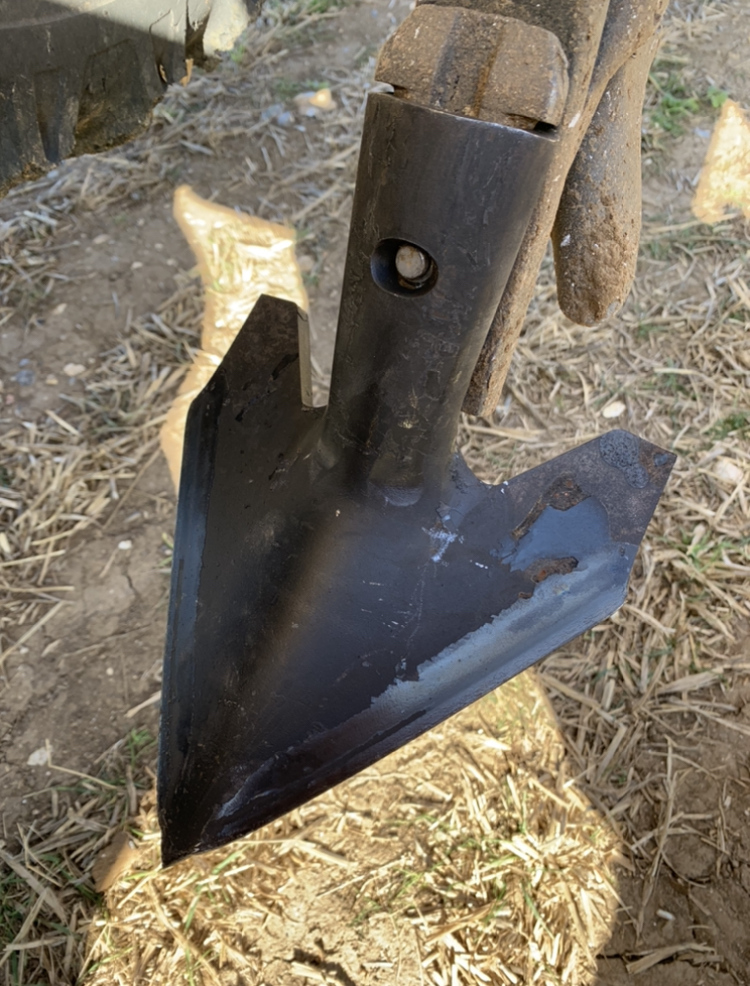 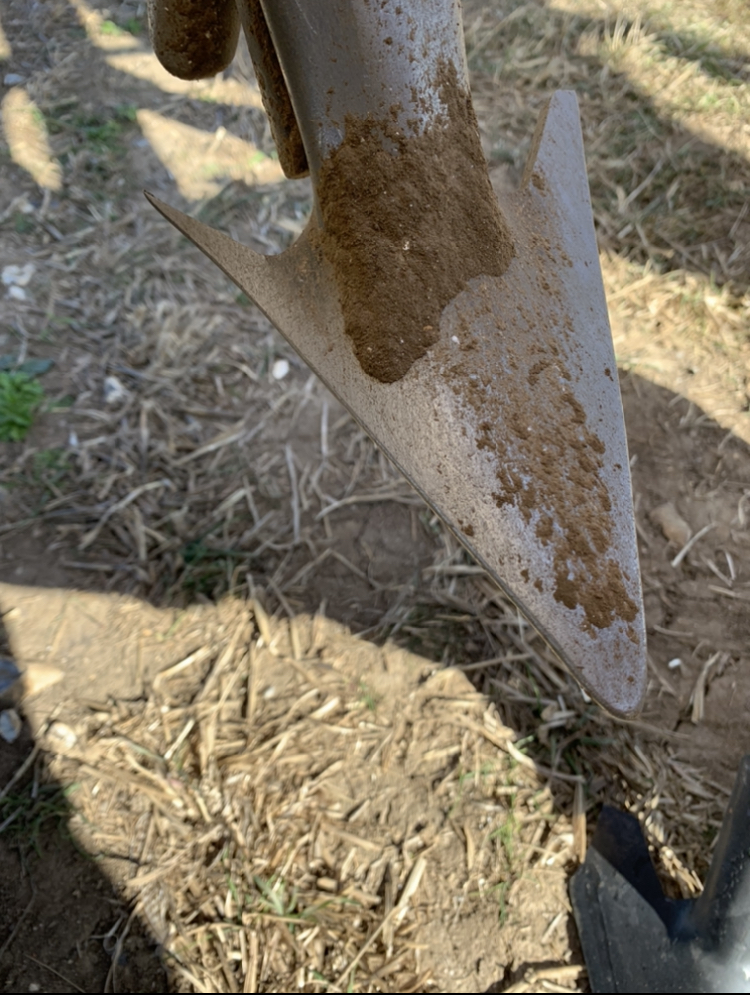 The tractor uses about 350 litres of diesel per day and is 215 bhp. That’s a mid sized tractor these days, and 400 hp isn’t uncommon on some big cultivation equipment. 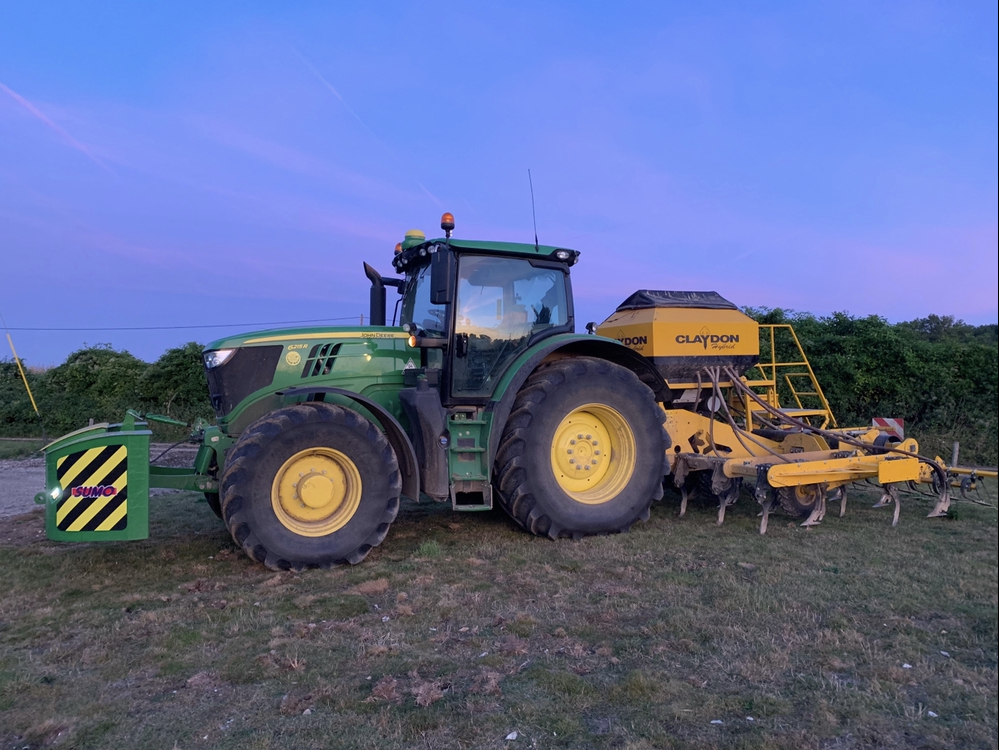 The technology I’m modern equipment is amazing, and everything is now controlled electronically. 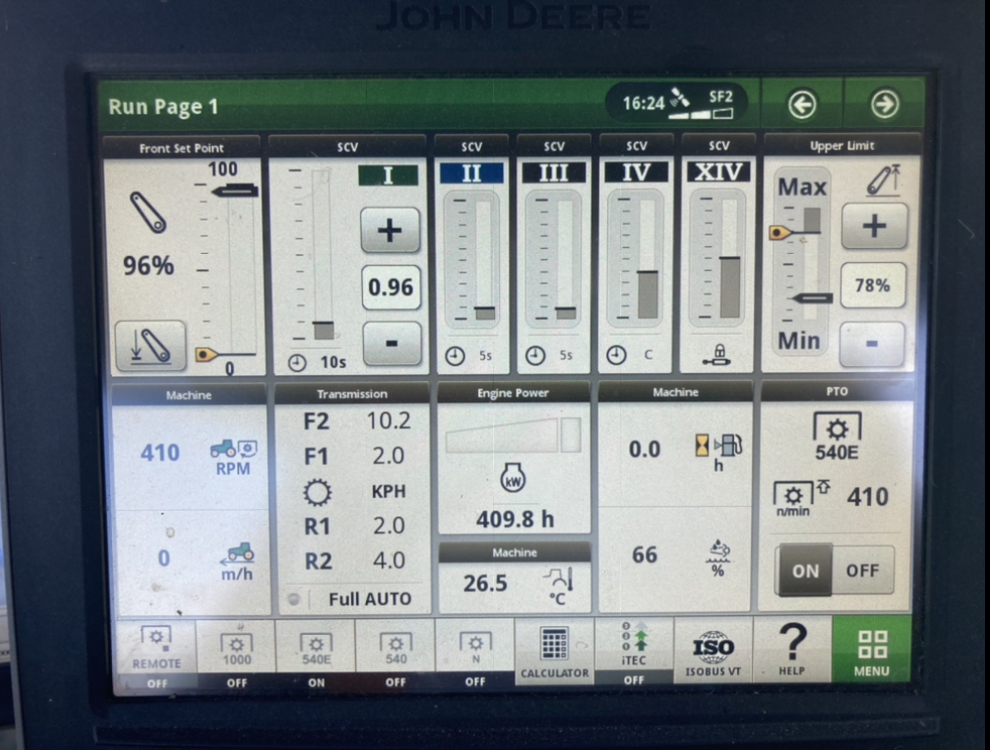 The tractor steers itself in the field using John Deere’s equivalent of SkyDemon, which is called GreenStar. Different accuracy subscriptions can annually be bought, and I pay for what is called SF2, which is mid range, and good enough for planting quite accurately, and gives me an accuracy ‘turn by turn’ of around 3cm. It costs (don’t tell Tim Dawson this...) about £600 per annum. 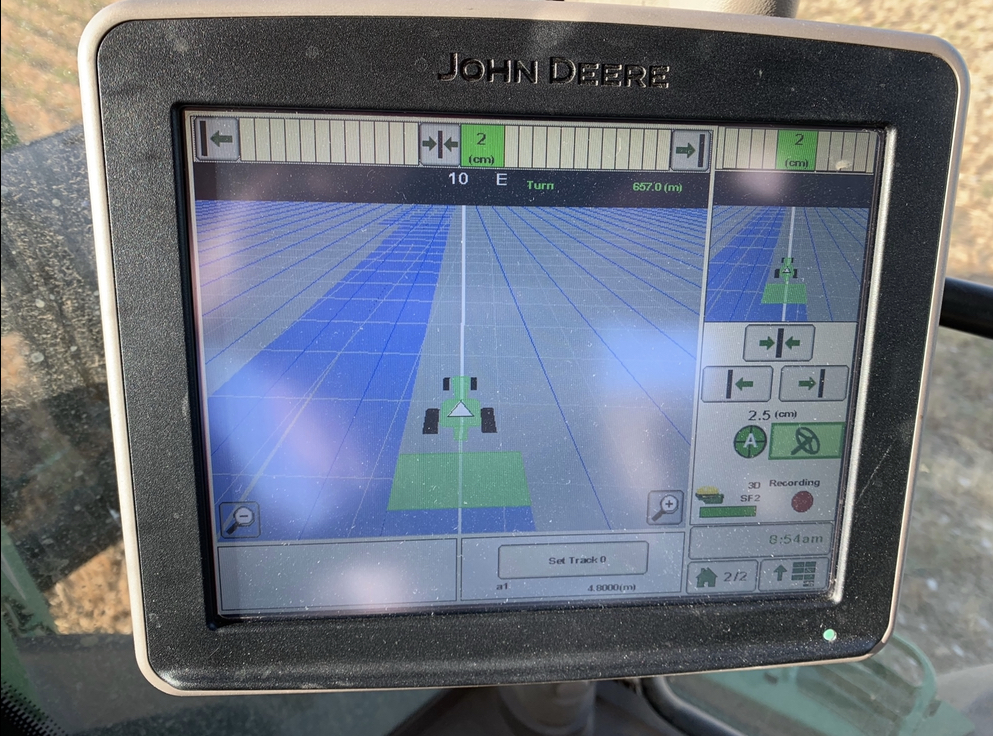 The drill is set to plant the wheat at about 2 inches depth. As soon as possible after planting we apply a pre-emergence’ herbicide which is a product that acts like an invisible film on the surface of the soil, and allows the wheat to pass through but nothing else. 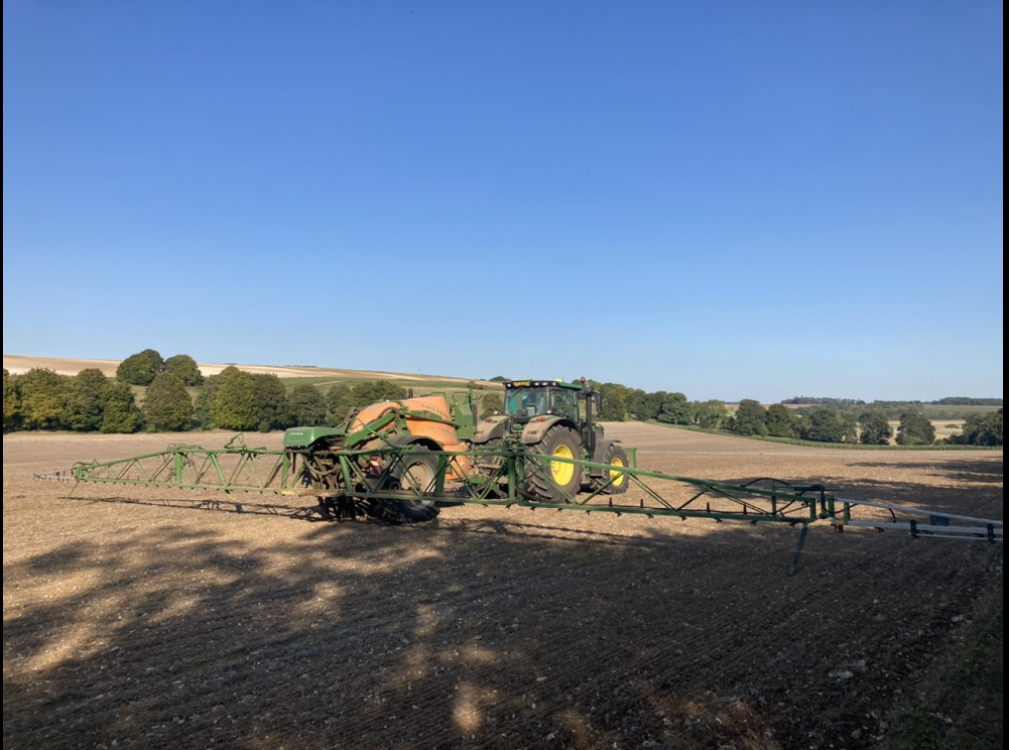 So, the more smooth and even the seedbed is, the better this product works. This is partially why we carefully roll the seed in, but rolling also presses down any stones (to protect the combine knife in 11 months time) and also creates a better seed to soil contact, and therefore better drought resistance and more even emergence.

Slugs are an issue in wet autumns, but a dry one tends to keep them deeper down and they cause less of an issue.

I’ll update as and when the crop emerges and with regular updates.

C66 will be answering questions as well as myself (won’t you!) so feel free to ask away.

And to prove these aren’t internet pics, here’s your author. 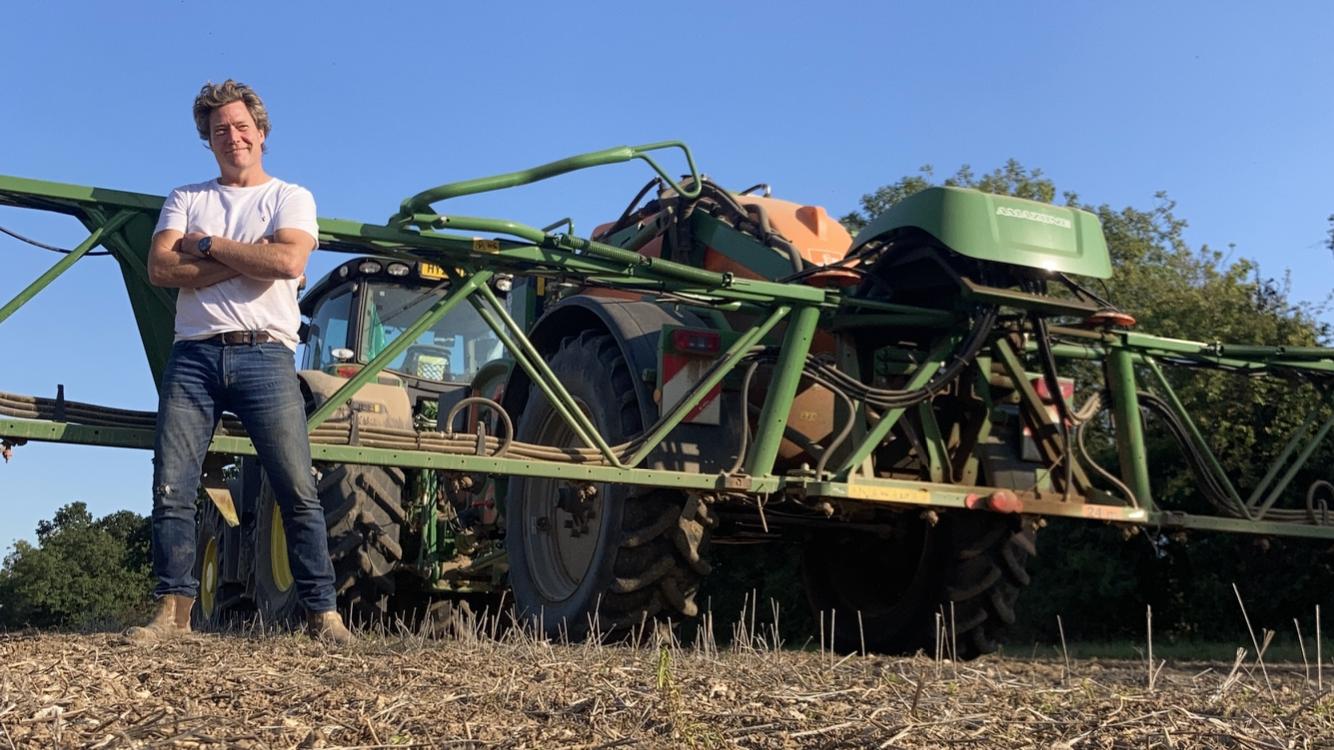 MikeB, Pete L, johnm and 17 others liked this
Never criticise a man until you’ve walked a mile in his loafers

TheFarmer wrote:I’m going to spend a year running through a field of winter wheat.

Is this a very drawn-out Theresa May impersonation?
kanga liked this
“I am somehow less interested in the weight and convolutions of Einstein’s brain than in the near certainty that people of equal talent have lived and died in cotton fields and sweatshops.” Stephen Jay Gould

I've heard of some that adjusts the rate of sowing/fertiliser/herbicide depending on the previous yield, is that a thing? 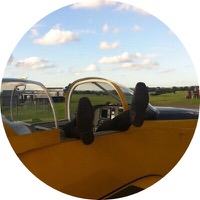 I've heard of some that adjusts the rate of sowing/fertiliser/herbicide depending on the previous yield, is that a thing?

Yes, variable rate seed and fertiliser is commonplace now, where soil information is fed into the applicator / drill, and they adjust their rates on the go. Pretty clever stuff.
Never criticise a man until you’ve walked a mile in his loafers

The REAL farmers (who get up at silly o’clock) are the stock farmers. I have full respect for them. They work physically hard and in very tough environments. They are men and women of iron, quite literally. Never underestimate the mental and physical strength of a stockman!
Pete L, johnm, Kittyhawk liked this
Never criticise a man until you’ve walked a mile in his loafers 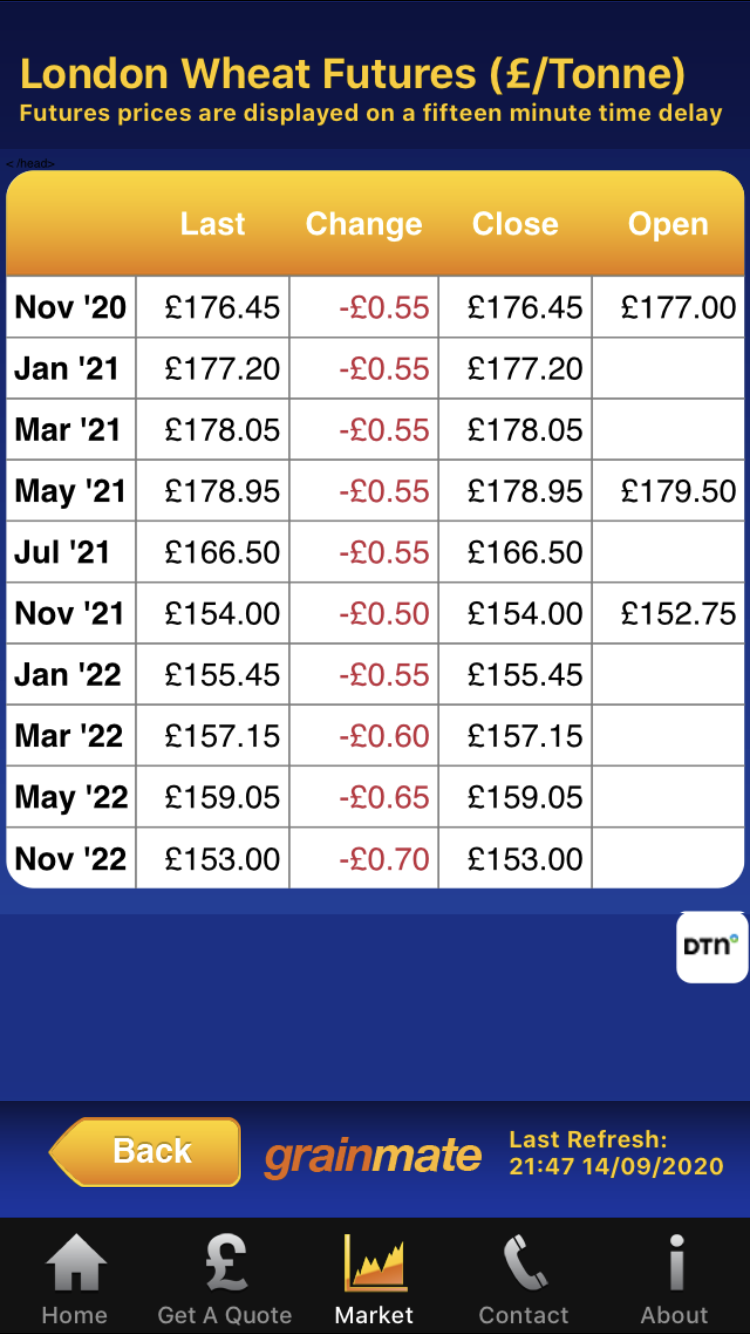 There are lots of apps we use to keep an eye on the market.

We can sell three years ahead if we want. The crop I planted today is already 30% sold on the futures market, Mainly because of lack of confidence due to B****T and trade tariffs etc.

It’s wise not to forward sell more than 60% of budgeted yield due to the vagaries of weather etc that can cause havoc leading up to harvest.
Never criticise a man until you’ve walked a mile in his loafers

My first response was to think that you didn't have a farm, more an outdoors factory

The REAL farmers (who get up at silly o’clock) are the stock farmers. I have full respect for them. They work physically hard and in very tough environments. They are men and women of iron, quite literally. Never underestimate the mental and physical strength of a stockman!

Indeed.
I have very little knowledge of it other than being brought up in the countryside - we had a bungalow at the end of the road up to the Westbury White Horse looking over the vale towards Devizes.

I remember there were cows in the field behind the house, with a portable mlking parlour. This must have been the mid 1950s. We had quite a good deal going, my sister and I would wander out to watch the milking, with a container of hot - well warm - tea. The stockmen would drink the tea and fill the container with very fresh - still warm - milk. Eventually someone noticed and it stopped.

Eventually people discovered that if you added fertiliser you could grow wheat and barley on what was mostly powdered chalk. There was one memorable occasion when they used a crop duster!

Was only wondering earlier, what happened to stubble burning?
Status updates:
Disco Tony: Nothing from Disco-Tony - 06 Sep 2016
Sheffield City Airport: Boeing on the runway
Disco Tony is MIA download/file.php?avatar=4771_1469022914.jpg

TheFarmer wrote:...They are men and women of iron, quite literally...

TheFarmer wrote:The drill is set to plant the wheat at about 2 inches depth. As soon as possible after planting we apply a pre-emergence’ herbicide which is a product that acts like an invisible film on the surface of the soil, and allows the wheat to pass through but nothing else.

When you say "as soon as possible after planting", would that ideally be hours, days...?
Wildcat Aerobatics
@wildcataeros

I watch the guys at our strip farmland all around the year with different kit for different seasons.

Yesterday for example there was a brace of loaders filling from a 100 metre long pile of polythene covered chemicals a raised sprayer with massive arms dumping white powder . I had to time my takeoff carefully to avoid his end of run turn around when the arms overlapped the strip.

Often wondered where they keep all that stuff which is used for a small number of days per year.

We have a great relationship with our farmer/landlord:He rolls the strip in spring and last year when planting hedges / trees all round his fields he kindly left a 30 metre gap where our runway threshold abuts the peri-track round the field without having to be asked .. In the summer he gets his men to shift half ton straw bales 30 m away from the edge of the strip to avoid Jodel/Robin type incidents
Pete S as was