What criteria do you use as to whether you wear a face covering?

or a covid card in case they don't believe your badge
https://assets.publishing.service.gov.u ... _print.pdf
Status updates:
Disco Tony: Nothing from Disco-Tony - 06 Sep 2016
Sheffield City Airport: Boeing on the runway
Disco Tony is MIA download/file.php?avatar=4771_1469022914.jpg

100% adherence in the hospital again this week. The reusable ones are comfortable.
eltonioni liked this

eltonioni wrote:Today is day zero for compulsory face coverings so we'll hear about plenty of that sort of thing in the coming days.

Let's see if this encourages people to go back to work but don't hold your breath - not even in an ironic mask wearing way.

Mods, we need a mask emoji.

Do you mean back to work or back to their previous work location?

A lot of people have been unable to work, and/or are on reduced income, through no choice of their own. Others have continued to work, but not in offices etc.

Very sensitive subject. Many have increased their productive hours as they are not commuting or otherwise travelling. For them a visit to an office, and meeting up for a chat, might be a nice change. Others have had their jobs and businesses hit significantly due to a sudden shift in other people’s work locations combined with restrictions on the leisure industry.

Some roles, such as teaching, have continued in different ways under difficult circumstances. Others, due to the nature of the work, have been easier to adapt.

Some people I know have been stuck in high rise flats. One friend lost his job just before Covid and furlough. His prospects are pretty grim at the moment.

It’s very hard working and, at the same time, interacting with people who are being hit hard, both inside and outside the family. The revenue some have lost is eye watering.

I’ve posted a little bit before about my family (a reason why I use a handle). My daughter was one of those who found out yesterday that her employer won’t be able to re-open today. Very, very hard for her, even though, in not being able to go back, yet she is also reducing the risk to her parents who don’t often need to leave the house. This leaves mixed and confused feelings. Having lived through the wipe-out of so much industry in the 80s and 90s I’m not looking forward to the coming months.
eltonioni, PeteSpencer liked this 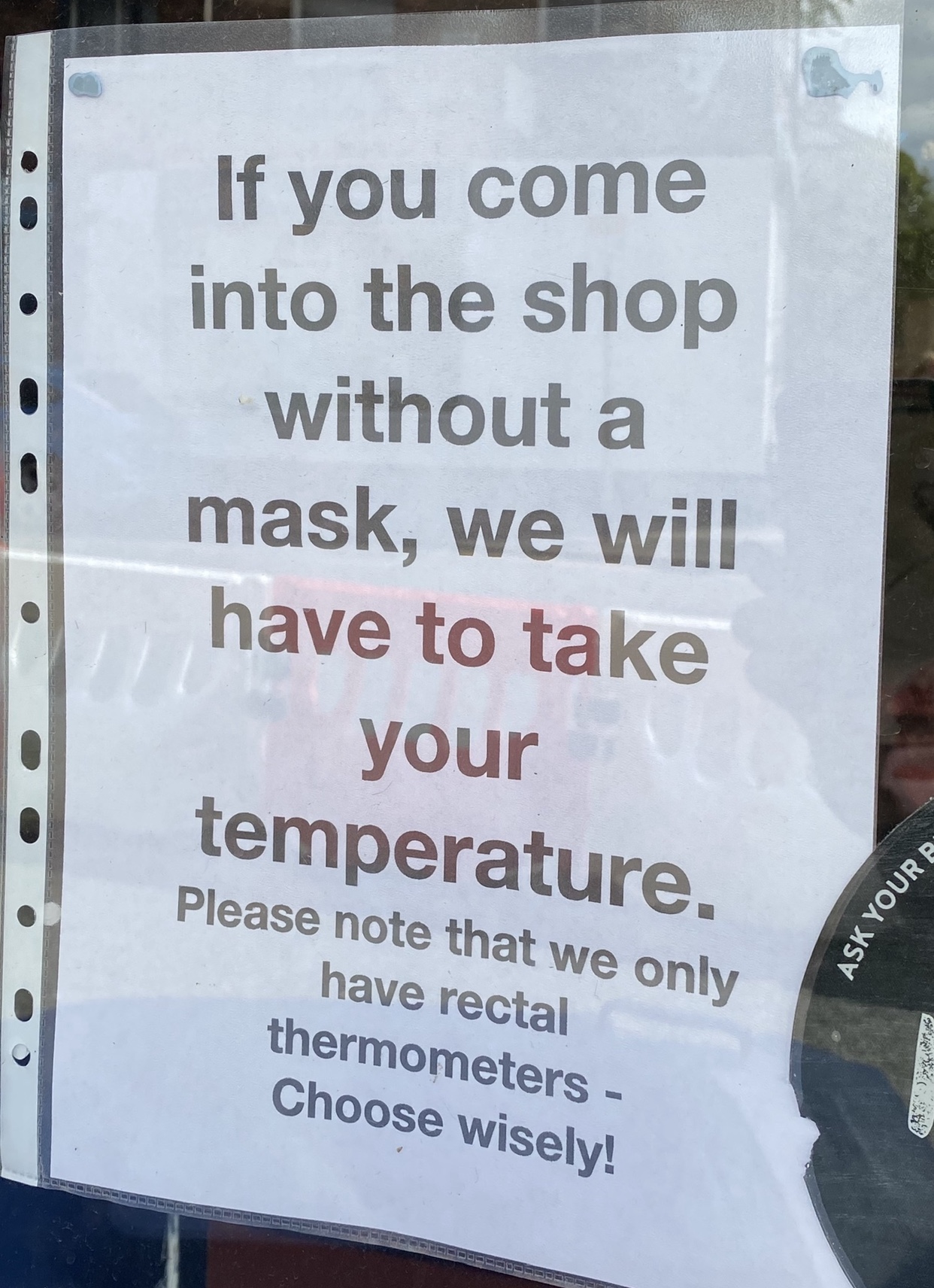 eltonioni wrote:Today is day zero for compulsory face coverings so we'll hear about plenty of that sort of thing in the coming days.

Let's see if this encourages people to go back to work but don't hold your breath - not even in an ironic mask wearing way.

Do you mean back to work or back to their previous work location?

Both, so far as is possible, which is to say everyone that's not in a known vulnerable group.

Our economic structure is quite possibly about to collapse if we don't. Very many people don't have the luxury of being able to work at home in any case.. Very many of those that do are will very soon find that they too have no job because Hypertwist WashWipe Corp, the firm that makes the windscreen wiper control motor for the vans of the firm that empties the sanitary bins for the company that does the accounts of the joiner who fitted the staircase of the nursery school where the work-at-homer sends their kids doesn't need the Hypertwist WashWipe servo software update 3.5 that she was working on from the kitchen table instead of the office which has been closed and now doesn't need the ladies bogs servicing by vans with Hypertwist WashWipe servos.

^^That was the opposite of pithy but you know the point I'm making.

HMG have been releasing all sorts of papers and this one should catch the eye from just before lockdown. It formed some of the basis for Project Fear (Covid-19 Edition) that's scared the bejesus out of people but it bears no relation to what's actually happened. And yes, I am using the retrospectascope.


Parse that lot into the UK population and we've got panic and understandable overreaction. We know a little bit more now and can adjust accordingly at the macro level.

As a slight aside I took these photos outside and in the car park at John Lewis in Sheffield centre yesterday (Saturday). In normal times this car park has a queue of patient Range Rovers, BMWs and Audis out in the street. Yesterday was the second day of reopening and it was free (FREE!) to park and I was in bay #70. You don't need me to say what's going on here, the emptiness says it all. 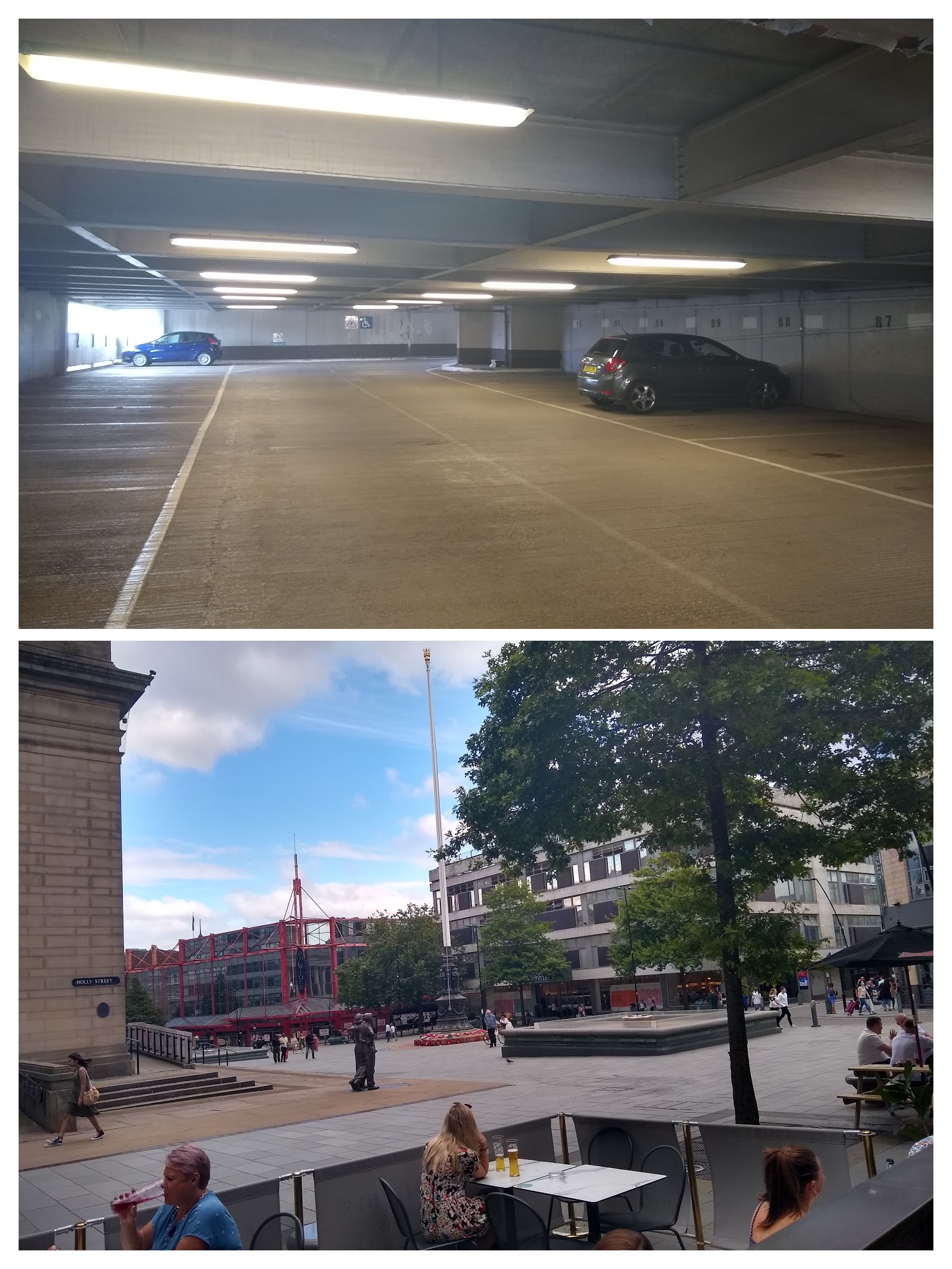 Masks aren't building confidence IMO. Our city centres are toast.They certainly won't survive another lockdown. The mask free pubs were curiously busy but the shops not so much. Most pubs / restaurants are toast and they won't survive closing to enable schools to reopen.

It's not unreasonable to say that anyone still on furlough PROB90 hasn't got a job to go back to. That's 9.5 million people as of 26 July.

Anyone who thinks that their lifetime of graft to accumulate pensions, savings and investments are safe is kidding themselves because the Chancellor is coming for them. It's just a matter of how much and when and that depends on how many people go back to work and when.

Nobody is safe. The non income generating public sector from pen pushers to surgeons will be hit as hard as the private sector and very many of those who remain employed will be techologised out of their career as fast as the P45's can be issued.

Basically, it's all a bit Carp and we're going to have to learn to live (and die) with this damned thing. I don't have any clever answers or even bright ideas.
Status updates:
Disco Tony: Nothing from Disco-Tony - 06 Sep 2016
Sheffield City Airport: Boeing on the runway
Disco Tony is MIA download/file.php?avatar=4771_1469022914.jpg

By kanga -  Sun Aug 02, 2020 6:46 pm
Like
Sun Aug 02, 2020 6:46 pm #1787891
Today, as since we reopened, in accordance with law and regulation (for England) face coverings at JAM were recommended in display hangar but mandatory in cafe. All the visitors have been very cooperative, and most have come with their own, for all the family except tiniest, although many of the children would have been exempt. We do offer them at the (new, outside) Reception (requesting a 50p donation), just in case; very few have been needed.

From our next opening next Saturday, they will be mandatory in the hangar as well. We have no reason to expect any resistance. Obviously we cannot know how many if any have chosen not to come because we request that they be worn, but I doubt there will have been many. Equally obviously, there will be people who have chosen not to go out anywhere, including shops, because of the coverings or for other reasons, the latter being possibly/likely perfectly sound (eg real or perceived vulnerability) or maybe in some cases less so.

I think my point is that if our organisation of amateur volunteers can make arrangements to cope, and still attract 'customers' (albeit non-paying), then I'd expect (many) businesses also to do so. There will, of course, be reduced demand for many products and services (but maybe more for others), and reduced spontaneous or planned footfall in some places (but, again, maybe more in others). There will be economic 'casualties', but also (to stretch the metaphor) 'neonates' or 'phoenixes'. In short, I accept that the virus will affect our way of life for quite a long time, but do not (yet) accept that economic catastrophe is the inevitable consequence.
(mere guide at) Jet Age Museum, Gloucestershire Airport
http://www.jetagemuseum.org/
TripAdvisor Excellence Award 2015
http://www.tripadvisor.co.uk/Attraction ... gland.html

kanga wrote:Today, as since we reopened, in accordance with law and regulation (for England) face coverings at JAM were recommended in display hangar but mandatory in cafe...
<snip>

how does that work (facemask in cafe)?
assume you remove to consume purchases
is it just while loitering/queueing?
there are two sorts of people
those that can extrapolate from incomplete data . . .
Mike McP

how does that work (facemask in cafe)?
assume you remove to consume purchases
is it just while loitering/queueing?

cafe is now takeaway only, as signage makes clear. Our picnic tables overlooking the airfield have been popular

By MattL -  Sun Aug 02, 2020 7:02 pm
Like
Sun Aug 02, 2020 7:02 pm #1787899
It’s quite obvious to me that everyone is favouring outdoor leisure at the minute, and sticking on a face covering to dash in and out of shops as quickly as possible, for essential stuff only. When the weather changes, which will probably coincide with schools back and end of furlough, it could be a horrendous economic perfect storm. There will probably be an uptick in illness as well judging by the filthy masks people are breathing in and constantly face touching and faffing around with now. Social distancing is noticeably being ignored in public spaces now since mask wearing. I fear it will have been a huge policy mistake.
Post are personal views only.

mmcp42 wrote:how does that work (facemask in cafe)?

By johnm -  Sun Aug 02, 2020 7:51 pm
Like 1
Sun Aug 02, 2020 7:51 pm #1787911
A lot depends on where you are, here in the Cotswolds pubs are running bookings and using marquees, we took the children to the theatre yesterday and to Adam Henson’s Farm park today, shops are open with queueing and click and collect and/or appointments and the markets are busy.

Use of masks is following the good practice apart from the odd half wit.

Gatherings of young folk have been seen and they present the biggest spread risk at this point.

I wish the Chancellor good luck coming for my pension the joint impact of COVID and Brexit inept management on the stock market are well placed to make it disappear, unless business creativity and contingency planning manages a level of mitigation.
kanga liked this
John Milner Fairly tolerant PPL/IR flying a TB 20 from Gloucestershire

Sweden releases their Q2 economic stats in a couple of days. Rumour is that the numbers will be comparatively good while their IFR is no worse than those who've crippled their economy and way of life.
Status updates:
Disco Tony: Nothing from Disco-Tony - 06 Sep 2016
Sheffield City Airport: Boeing on the runway
Disco Tony is MIA download/file.php?avatar=4771_1469022914.jpg

By kanga -  Mon Aug 03, 2020 11:07 am
Like 1
Mon Aug 03, 2020 11:07 am #1788006
In NSW face coverings in takeaways are again 'recommended' (again 'mandatory' in Victoria, where severe lockdown has been reimposed). We've heard from our daughter in Sydney that our son-in-law recently forgot to take one when going out. He popped into a coffee shop, where everyone else was wearing one; on reflection, he realised that while he was legal he felt guilty, whereas if they had been mandatory he might have been resentful. Meanwhile, a former DoD colleague in Maryland has at last been allowed (and called) back to work in the office (part-time, staggered hours), and reports that people at the workplace have been sensibly complying with sensible precautions including face coverings.

I think social pressure among strangers will be a significant determinant of behaviour, just as it took time for attitudes to drink-driving, seatbelt wearing, public smoking etc to change, but these were becoming effective even before laws changed or chances of being caught while lawbreaking became higher. Obviously, there will be individual impervious or insensitive to such pressure, and maybe to such laws