The plague ships continue to be a good bet. Interesting how the US market shares are clustering at the top of the table

Note that the % gain/loss relates only to the shares held, the cash has an effect on the rank. I will sort that out next week.
Flyin'Dutch' liked this
"We sleep soundly in our beds because rough men stand ready
in the night to visit violence on those who would do us harm."
- George Orwell-

An observation is that once again the Petridishes are in the lead and the healing faction follows;

I learned that lesson a long time ago.

My mother died nearly 20 years ago and we had been flown to the Netherlands courtesy of Norfolk and Good Airways by the very generous 2 Donkeys (Thank you).

To make a bit of an appearance I had rented a black Mercedes E Class to get about and go to the funeral.

At the undertakers we were organising the service and the wake and whilst peering in a pensive mood over the carpark, as you do, I noted that the only other car there was the Mercedes 500 SEL which belonged to the undertaker.

I commented to the undertaker that his business was clearly way more profitable than my line of work, when he said: 'Why do you say that?'

Pointing at the cars I said: 'Look if you are in the business of fixing folks you can afford to rent an E Class, when you took after the dead you can afford a 500 SEL!'

We had a laugh and organised the rest of the proceedings.

I did of course negotiate an appropriate discount after that.

kanga, eltonioni, nallen liked this
Frank Voeten
Use email please rather than PMs 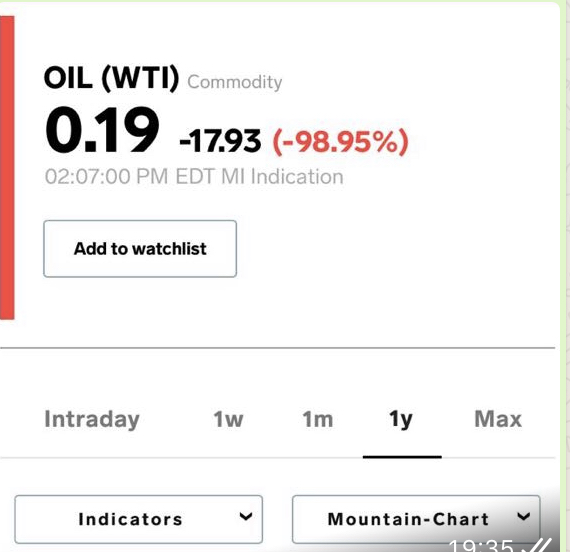 Buy on the dips, calendar spread. This is a trade that will pay back over the next 4-7 years.

Betting on the bottom of a market is like betting that my wife cannot get even more p issed off than she is. Just when I think it’s over, she’ll whip out another complaint, and my mood drops even lower....
Flyin'Dutch', Charles Hunt liked this

(Hiring out supertanker space seems quite lucrative at present though

(Hiring out supertanker space seems quite lucrative at present though

Oh, absolutely! If I could be bothered, I’d point back over the years when I’ve said exactly that. I had my nearest and dearest, who was at the time a broker for polypropylene precursers. That’s huge effin tankers, wobbin about off the coast, just waiting for the price of crude to pop up over a certain level.

Meanwhile The Farmer continues to improve week on week.

Nice work from jcouch.
tKF's faith in beer is rewarded

Rob P
TheKentishFledgling, ChampChump liked this
"We sleep soundly in our beds because rough men stand ready
in the night to visit violence on those who would do us harm."
- George Orwell-

However if we want to replicate what would happen in real life it should be possible to exit one's holdings at will - up to the end date?

So can one 'exit' and hold on?
Frank Voeten
Use email please rather than PMs

However being stuck on a stock when the game is only short-lived is an unnecessary risk.

Getting out of vaccines and into dirty oil may not be a bad option in the next few weeks.
Frank Voeten
Use email please rather than PMs

Flyin'Dutch' wrote:
So can one 'exit' and hold on?

I don't see why not.

Rob
"We sleep soundly in our beds because rough men stand ready
in the night to visit violence on those who would do us harm."
- George Orwell-