kanga wrote:I was still imagining tKF as a slim teenager at List fly-ins. That picture is seriously disturbing ..

Top idea for curried fish on the BBQ

We have been running down the freezer, and been looking at some white fish. It is too good for a bake - was struggling for ideas though.

Today is a first for me - an apple pie!

Kids had left the apples just begin to go a tiny bit wrinkly, so thought “why not!”

I have to let it cool down, but another first for today is banana and vanilla ice- cream 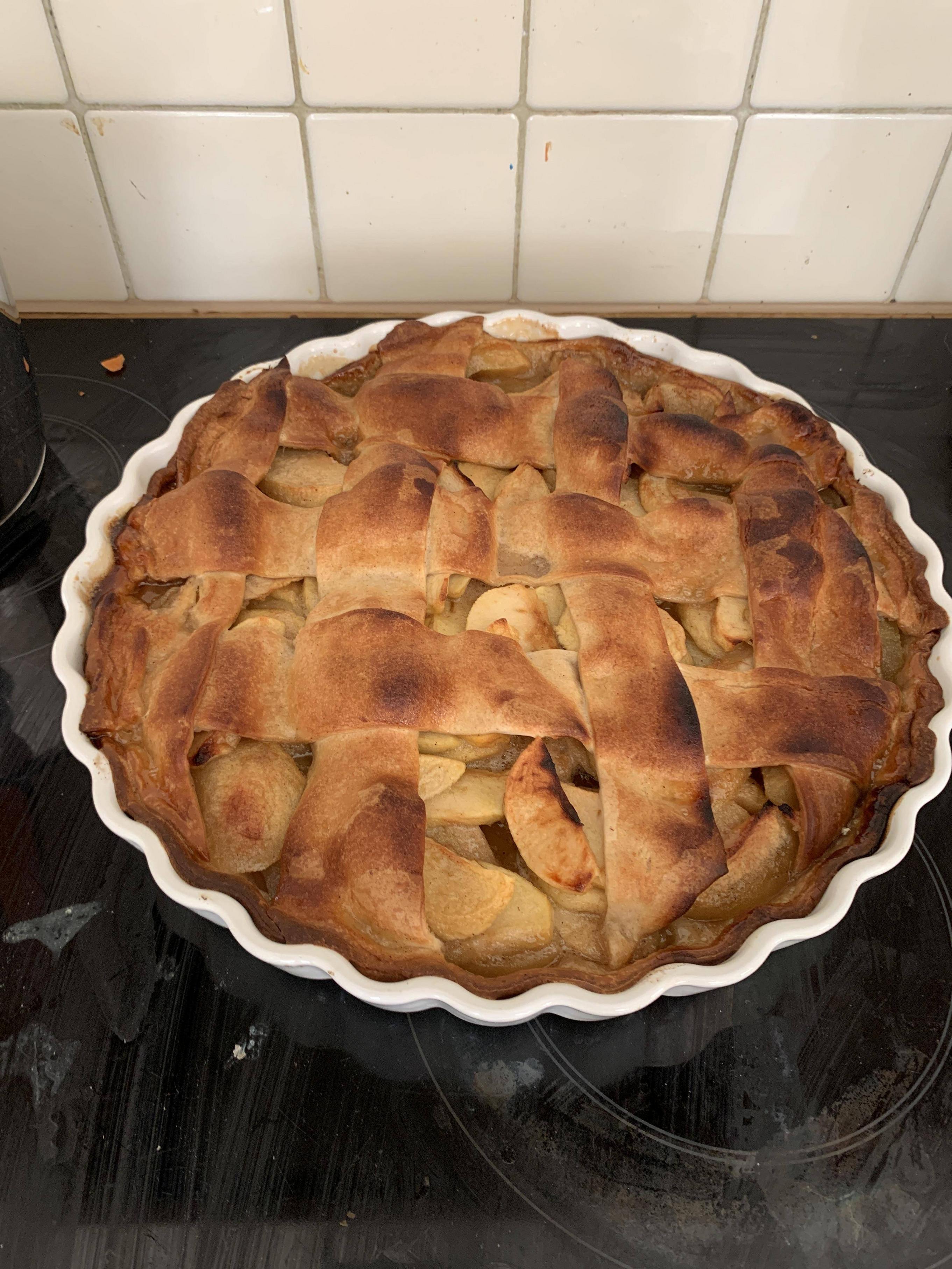 kanga wrote:I was still imagining tKF as a slim teenager at List fly-ins. That picture is seriously disturbing ..

He does have a charming wife though so he's doing something right.

TheKentishFledgling wrote:Pete, get a BBQ chimney. Tip the coals in, light it up and you have coals ready to cook over in the time it would take your oven to get up to cooking temp. Zero faff.

Wouldn't be without mine.

When I said fire up the barbie I meant turn on the gas ! 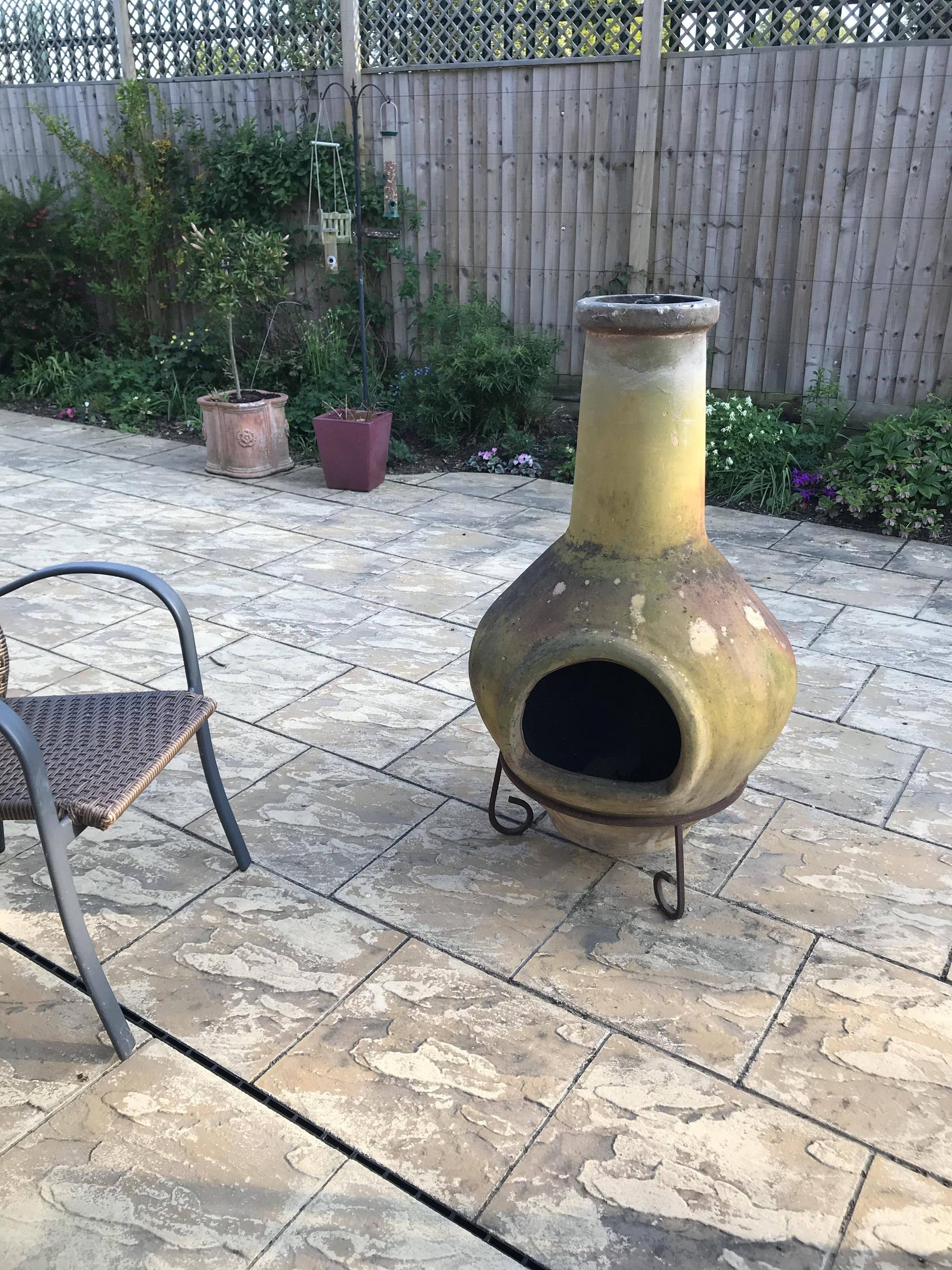 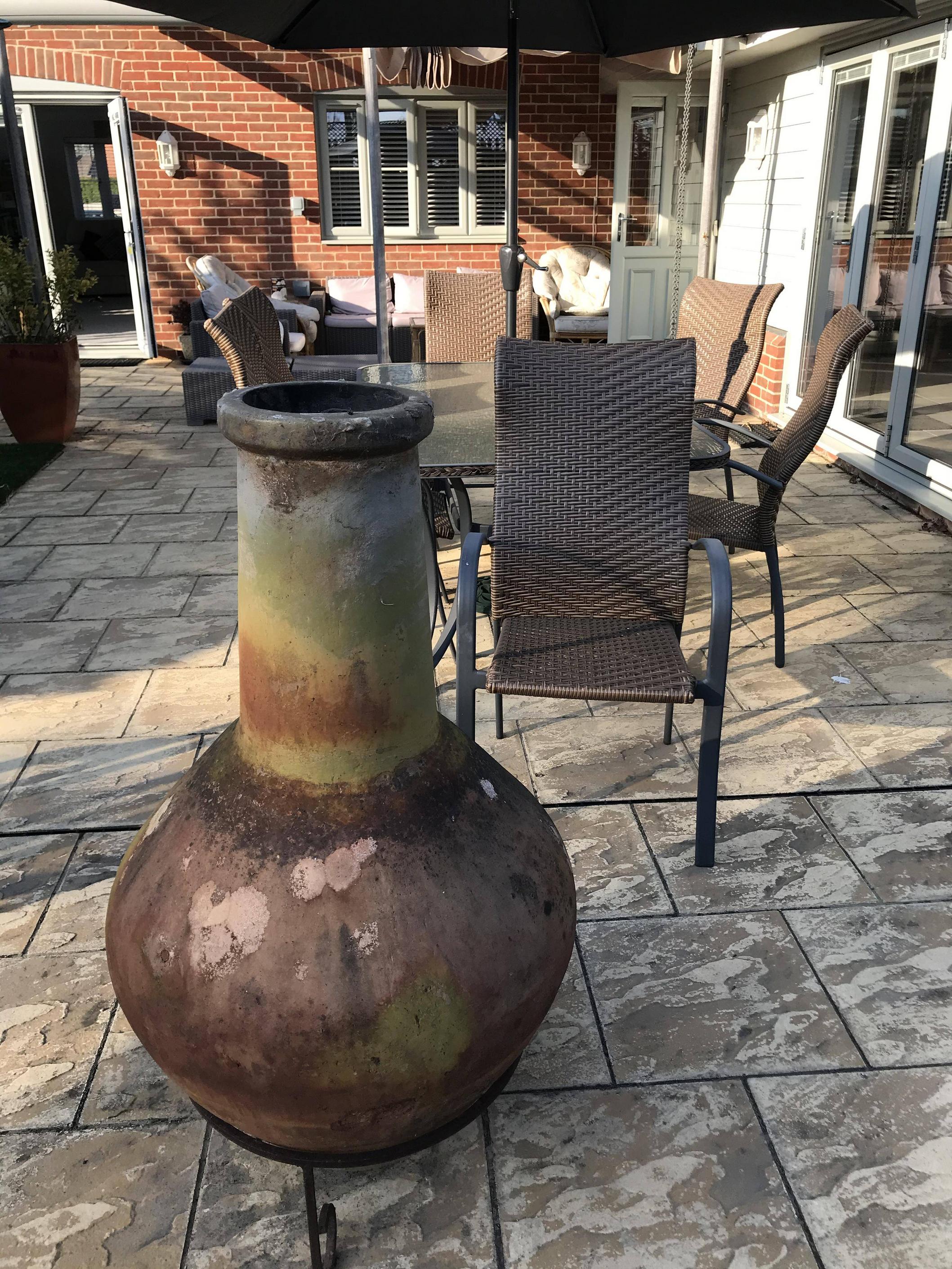 Peter
Leodisflyer liked this
Pete S as was

Top idea for curried fish on the BBQ

I’d normally go for monkfish but my fishmonger of choice only had hake. A first world problem if ever there were one. Marinating now - will report back.

Kentish asparagus as a starter on the grill now for a few minutes. As Prop said, it’s not all bad, and we’re very lucky to be able to say so.

When I said fire up the barbie I meant turn on the gas ! 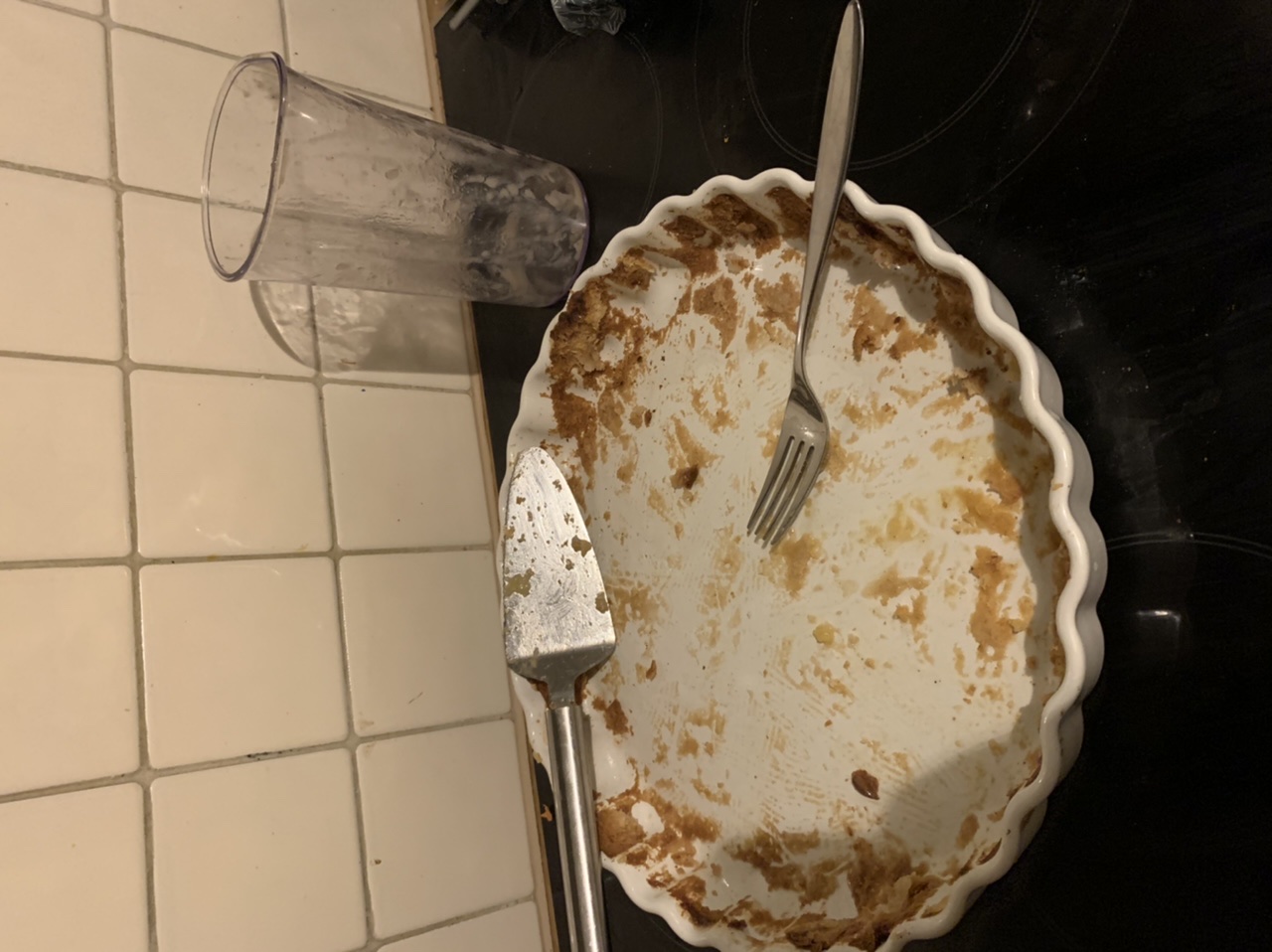 - sorry, photo is sideways I dunno how to fix!

This was the kids, scrounging for more - realising their luck was out - then picking at the encrusted remains

Think I must do that again soon - and the ice-cream was embarrassingly easy....
Leodisflyer liked this

The starter seems to be improving in quality. I've been using rye flour for the feeding and the rye flour is not a recent packet so probably lots of natural bacteria in it. Bannetons arrived from Amazon today. Expecting to take a bit of a step back over the next 3 loaves to get the Banntons. There's something very satisfying about taking 24 hours or so to make a loaf of bread.

Biggest learning has been to use a dryer dough than for a yeasted bread.

Garden centre mail order supplies seem to be stabilising. Vegetable plants by mail order seem to have variable quality packaging. The worst was a box that had "this way up" on what would be the side of the plants and the label on the side of the box which had the bottom of there plants. You can guess which way up the delivery boy (I assume the driver's son) carefully left the package. Salad leaf so they are recovering from the roots.

Romain Cools of the potato growers' union Belgapom presented it as a matter of survival, as a major export sector fears ruin in the coronavirus crisis.

About 750,000 tonnes of potatoes are piled up in Belgian warehouses, as the lockdown has sent orders plummeting.

"Let's all eat chips twice a week, instead of just once," Mr Cools urged.

- sorry, photo is sideways I dunno how to fix!

Have a look at my last post in this short thread.

Peter
OCB liked this
Pete S as was

chevvron wrote:..an analysis of tinned food up to 40 years old and well past its use by date said it was found to be perfectly safe,..

ISTR a food cache from Scott's doomed Antarctic expedition was rediscovered after much longer than that. It included cans of Nestle condensed milk. I read that Nestle paid a large sum to the discoverers, possibly the BAS, to be allowed to extract a small sample from one of the cans with minimum damage to the can, for analysis. Nestle produced thorough analytic results showing that it would have been perfectly safe to use.

I often wondered how old were the cans in some of the UK military Ration Packs we had in the '60s; the chocolate bar I found in one was >10 years old, as I was able to determine by the printed company address on its label, and I knew the company HQs had moved in the meantime. By the '70s, IIRC, the cans were date-stamped.
(mere guide at) Jet Age Museum, Gloucestershire Airport
http://www.jetagemuseum.org/
TripAdvisor Excellence Award 2015
http://www.tripadvisor.co.uk/Attraction ... gland.html

kanga wrote:
I often wondered how old were the cans in some of the UK military Ration Packs we had in the '60s;

I remember watching a video of (an American) military food enthusiast who obtained from somewhere several ration packs of different sorts, including one British Army one, from WW2. He carefully opened and tested each one and with only a few exceptions everything was still edible. I suppose they were packaged for use in extreme conditions but it was still remarkable to me. Interestingly it was one from the much later Vietnam era which had fared the worst.

Edit to add: I remember one cold war survival course I had to undertake in which boiled sweets were handed out as an example of what might be in the bunker packs. We were told after eating them that they were at least 40 years old.

By Bill McCarthy -  Tue Apr 28, 2020 10:04 am
Like 1
Tue Apr 28, 2020 10:04 am #1764806
If you come across tins of corned beef from the early ‘60s, I would give it a miss. The typhoid outbreak of then was traced to imported tins of Argentinian corned beef. When clearing out my late F-I-Ls place I found one of those tins of Fray Bentos snake and sidney pudding - the top was domed to such an extent that I almost called in bomb disposal. 1/6p was the price label !
The only “food” in the escape compartments of a sunken boat - packets of Barley sugar sweets. Obviously good enough to keep you alive for some considerable time.
kanga liked this
Antagonise no man, for you never know the hour when you may have need of him.

> ] it was also reported that, during immediate aftermath of Katrina, UK MoD responded to a US DoD request to fly a load of UK ration packs to a USAFB near New Orleans for immediate sustenance of displaced people. Almost immediately after RAF C130 arrived, US Dept of Agriculture stepped in to demand that all the still undistributed cargo be destroyed, because it has to be assumed that any UK-origin food not coming through regular channels had to be assumed to be at risk of contamination with BSE and so a public healtgh threat

Bill McCarthy wrote:If you come across tins of corned beef from the early ‘60s, I would give it a miss. The typhoid outbreak of then was traced to imported tins of Argentinian corned beef. .

I remember it well: Fray Bentos were dunking their recently sealed tins of corned beef to cool down after tinning straight in the River Plate, (at least into water drawn untreated from the river Plate) one of the most polluted rivers in christendom at the time.

The partial vacuum caused by condensation of steam in the tins allowed River Plate water complete with salmonella typhi to be sucked in through minor imperfections in the solder/sealing of the tin lids.