Paul_Sengupta wrote:Am I reading correctly that you've written off the cost of a £35k over 5 years?

Well as you may know The Ute has reached the end of the road, literally. Purchased for £600 in January 2009 and sold to the local garage for £100 it would appear to have depreciated at a scandalous £46.15 per annum

Commemorative picture of his last working journey before retirement 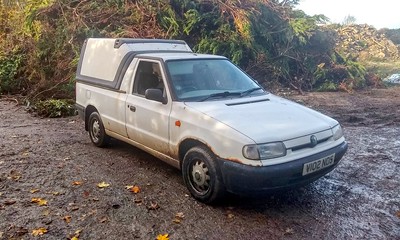 And just for completeness, his successor. The VWWV. Inflation though has taken its toll and this came in at a massive £681. 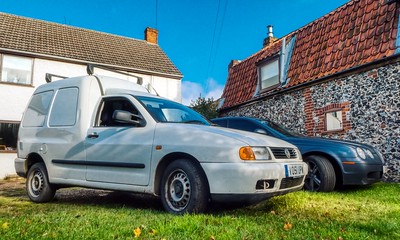 Paul_Sengupta wrote: £7k a year? That's almost as much as I spend on flying!

Actually flying? Yes probably. But pouring wealth into the Bulldog? I suggest that might be a few pence more?

Rob P
cockney steve liked this
"We sleep soundly in our beds because rough men stand ready
in the night to visit violence on those who would do us harm."
- George Orwell-

Rob P wrote:Actually flying? Yes probably. But pouring wealth into the Bulldog? I suggest that might be a few pence more?

Not really, though I do have a fair bit of capital expenditure currently sitting in my spare room waiting to go in. (new radio!)

I've had the aeroplane for 18 years, it might be an idea if I invested some money in some decent seat backs rather than the current B&Q ones I'm using.

Ford has unveiled its all-electric Mustang Mach E at a glitzy event in Los Angeles that included an appearance by actor Idris Elba.

The top-range version of the car can travel up to 370 miles on a full charge and recharge 57 miles (92km) of range in 10 minutes on a high-power charge.

There are buttons in place of conventional door handles and storage space under the front bonnet.

The various models can accelerate from 0-60mph in about eight seconds.

Just where are the normal cars that normal people buy?
Paul

The problem with that price is that it is pitched directly in the path of an optioned Model 3.

The purists ain't gonna buy it, I had a 2006 GT for nine years, part of the attraction of the car was that it was (in the UK at least) an "event" to drive, its practicality as a day to day car (other than the pifflingly small 60l fuel tank and huge doors which could make parking problematic) was a mere bonus. Switching it to electric to me takes away that feeling of an "event", it sanitises the car, which at one point made no apologies for its much maligned interior plastics, making up for it with a window rattling roar when you started the 4.6L V8 engine from cold, "it is a standard exhaust your honour, honest", the way it picked up its hem and hauled off down the road when you mashed the loud pedal accompanied by a noise loud enough to wake the dead. It was a brutal but honest car, sometimes dangerous (the traction control was so bad it was safer to turn it off in damp and cold conditions), it took the UK road conditions and 200 passes on York Raceway and Santa Pod in its stride, even when shod with drag radials, that car was fun, pure fun.

Electric cars provide their own nuances no doubt and probably are fun (never driven a pure BEV) but the Mustang to me is not that, time to put the horse out to pasture and move on with something else imho.
Facebook: https://www.facebook.com/groups/208830057065168
Youtube: Https://www.youtube.com/channel/UCKDg_4b9KAGvRFn5mVWtXQA?
Twitter: https://twitter.com/AviatingM
Instagram: https://www.instagram.com/aviatingwithmel/

I do agree with Melanie. There’s a lack of soul in an EV. The Leaf is, in some ways, a more interesting car to drive than the Model 3. The steering isn’t tight and the acceleration is that nice “oh this is quick” and long enough to enjoy it rather than “what just happened?” as you focus on lifting off to stay within the speed limit.

To me driving an EV is getting from A to B in comfort and being chilled. You don’t get the constant noise of an engine, which reduces fatigue and you don’t have all of those fiddly sticks and extra pedals that you get in a manual car. One pedal driving and automation is nice. They’re not cars for people who enjoy putting work into engaging with the vehicle.

It maps over to flying. I don’t fly at the moment, but when I did I preferred a more modern Robin to a PA28, which just felt like a 70s Cortina with wings. Many people love older planes - my first flights were in an Auster. Enjoyed flying in it, wasn’t so bothered about the aircraft. We all like different things.
Flyin'Dutch' liked this

By malcolmfrost -  Tue Nov 19, 2019 6:34 am
Like
Tue Nov 19, 2019 6:34 am #1730815
I reckon you either go High tech for normal use (with a bit of fun at traffic lights) and a proper Classic for fun driving, preferably something without Synchromesh! No point in having anything in between.
Maybe there would be a market for CarBnB!!

Reluctantly parking up the 996 I stepped into the less than awe-inspiring cabin and set off. Within a couple of miles I had a broad smile on my face.

Today my expectation for a Tesla or similar would be quite high. I wonder if I'd be disappointed?

Soon after I test drove a Model S (P100D) I test drove a Zoe and have to say I was underwhelmed - not because it lacked oomph, but because it didn't feel like "the future". But maybe that is a Good Thing for most people?
Flyin'Dutch' liked this

The shareopolane which our syndicate had for longest was a HR200 which had been bought new by its UK owner, diosmantled after his death after not many years of use, then reassembled to CofA standards by one of our members (a PFA Inspector, and serial restorer) and colleagues after >10 years in pieces. It was one of a limited number at the beginning of production which hyad had drum brakes, which were soon superseded by a nerw design of leg with disc brakes.

Some years after restoration the drum brake linings needed replacing for the first time since new; after all, they had not been used that often. We discovered that they came from a discontinued Lambretta

In this country, when it gets cold, unlike Southern California, regen becomes limited, so you tend to use the brakes a reasonable amount, the latest Tesla software update uses the brakes as well to slow to an absolute stop as opposed to a very slow speed.
It has been recommended that you turn regen off once a month, but that seems more about the calipers.
Quite honestly I'm happy with having to use the brakes a bit as it retains that skill!

Is that a marketing exercise, like the EV specific tyres that cost extra but when you look at the spec there are cheaper, longer lasting, grippier, quieter models out there?

Quick glance at the spec of my Zoe's pads, and they are the same spec as those fitted to a Renault Twingo, Clio and Nissan Micra at the small end, half the Dacia range, even a small Mercedes-Benz Citan van and a Lada Vesta Saloon (!).

Should say that Zoe always uses the physical brakes when less than 5mph so there will always be a tiny bit of ware, which will hopefully keep the disks clear.

PaulB wrote:I'm not sure that this is going to set the world alight either...

Ford has unveiled its all-electric Mustang Mach E at a glitzy event in Los Angeles that included an appearance by actor Idris Elba.