A young lad looks out of the kitchen window and spots the milkman’s drayhorse carrying a stonking great erection.

‘What’s that?’ he asks his Mum. ‘Oh nothing,’ she replies, ‘your father will explain’.

Lad runs off to find his father; ‘Dad, I just seen the milkman’s horse with a huge great black thing hanging down from between its legs. I asked Mum what it was, and she said it was nothing’.

A boy and his mother were going through the docks in Belfast where a lot of hookers were hanging around, plying their trade.
The boy said who are those women mummy?
Sailor's wives waiting for them to return from sea she said.
The taxi driver jumped in and said tell the boy the truth, they are prositutes!
The boy said what are prostitutes mummy?
Taxi drivers mothers said mummy.
GrahamB, Paultheparaglider liked this

[Apologies for bad taste, and get well soon.]
T6Harvard, Paultheparaglider, Trent772 liked this
Suiting the action to the words

By seanxair -  Wed Feb 24, 2021 7:50 am
Like 2
Wed Feb 24, 2021 7:50 am #1828565
Tiger was in a petrol station in Ireland to fill up his Mercedes hire car and was unrecognised by the attendant. However the attendant was a car fanatic and was admiring the seriously top of the range vehicle. Tiger introduced himself to the guy and told him all about the cruise control, heated seats, seat memory for each driver, emergency braking systems, media functions etc., etc. When they went inside to pay Tiger got his wallet out and a couple of golf tees fell out on the counter. What are those Mr Woods asks the attendant. Ah now those are are for putting your balls on when you are driving says Tiger. The attendant shakes his head in amazement. Jaysus, don't Mercedes think of everything.
Paultheparaglider, Charles Hunt liked this

Because I am busy tomorrow

Once applied for a job as a paediatrician. My previous experience as a foot masseur wasn't relevant.


Magellan was a famous Portuguese sailor who tried to eliminate gonorrhoea by circumcising the globe in the 16th century.


My local farmer breeds six legged chickens as he has a large family and they all like a leg. I asked him what they taste like. “Dunno, he said, “we can’t catch the beggars!”


Lost! My black cat with a red collar.
He's an extremely intelligent cat
So Mittens if you are reading this, come home.


Following the discovery of an illegal consignment of hand crafted mats, bags and rugs Police say they believe it to the work of the Local Raffia....


Young girl from Salford goes into maternity to give birth when the midwife comes in and says
"How about epidural anaesthesia ?"
The girl replies
"Thanks, that's a great idea but we've already picked a name"


Breaking..
News has come in that last night, a Russian acrobat whilst performing a human pyramid was badly injured.
A spokesperson for the troop quoted: “I don't know how we can can continue to perform as we don’t have Oleg to stand on”.


The Kray twins were crossing a field full of cows with Fingers Smith, Razor Roberts and Jelly Johnson. Reggie says: one of you is a copper's nark but I don't know who yet but I have a test... You have to lie down and let the cows have a good sniff around and they will find the traitor.
They all lie down and soon enough the cows come sniffing around. Jelly Johnson gets a couple of licks while they ignore Ronnie and Reggie. Then two cows start licking Fingers, then two more do the same, all round his legs and privates. Soon seven cows are wrapping their tongues round Fingers trying to pull pieces out of him.
Reggie says to his brother: there's our traitor, the cows will always find the grass.


When I was on the FIRST driver training programme at Bramley Garage the new recruits were quickly assessed. The most promising who had no incidents in the first week were allowed to continue their training on the newest vehicles.
Those who made the most driving errors were stuffed into the blunderbuss before being discharged.


Did you hear about the Austrian botanist who crossed a clamp with a large spoon and got a ladelweiss.?


In my army days I was ordered to make a list of all the lamps and bulbs in Buckingham Palace.
I was in The King's Light Inventory.


I've just arrived at the camouflage club and can see we have a big turnout - Which is rather disappointing.


Yesterday playing with the Granddaughter we made a telescope from old fish finger boxes... I now get a birds eye view of everything.


A red Indian friend of mine introduced me to his wife, This is my wife " Four Horses" I said it was a lovely name but what does it mean.
Nag nag nag nag, he replied.


I got 17 Valentines cards this year and it's left me quite breathless.. That security guard at Clinton Cards can't half run.


A lorry containing electrical goods has crashed in Liverpool. Police expect the road to be clear in five minutes.


Sick & tired of hearing these Olympic athletes say "how much work they've put in and the sacrifices they've made" What do they want?..A ruddy medal?


Wife wanted to make the sitting room more classy, so I've fitted a blackboard and 6 desks, that will impress her, can't wait till she sees it.


At least I got the jab, Wife said I was high risk because if this lockdown doesn't end soon she's going to kill me.


One of the worst jobs in the Yorkshire pits was above ground. That one lonely guy in flat cap who never said a word, just walked around all day with a brush in hand. He was the minesweeper.


Is it just me or has pancake day not been the same since Jif changed to Cif??


A man went to the police station wishing to speak with the burglar who had broken into his house the night before.
“You’ll get your chance in court,” said the desk sergeant.
“No, no,no!” said the man.
“I want to know how he got into the house without waking my wife. I’ve been trying to do that for years!”


Two fingerprints were top billing in a boxing tournament. It was advertised as The War of the Whorls.


NASA have landed a Rover on Mars after a 300 million mile voyage.
Amazing the one I drove in the 90s barely used to make it half mile down the road to Tesco's.


I recently spent £3500 on a young registered Black Angus bull. I put him out with the herd, but he just ate grass and wouldn't even look at a cow.
I was beginning to think I had paid more for that bull than he was worth. Anyhow, I had the Vet come and have a look at him. He said the bull was very healthy, but possibly just a little young, so he gave me some pills to feed him once per day.
The bull started to service the cows within two days, all my cows! He even broke through the fence and bred with all of my neighbour's cows!
He's like a machine! I don't know what was in the pills the Vet gave him . . . . . . but they kind of taste like peppermint.


HAVE YOU HAD THE JAB - URGENT NOTICE !


In the kitchen making a sandwich and I heard a noise, 10 minutes later the wife comes in and said, I just fell down the stairs and you didn’t come to see if I was okay! I said, sorry honey I thought it was Eastenders starting.


Entered a spelling competition. I was okay with isobar, isomorphism and isosceles, but got really stuck on cyanoacrylate.


In 2019, I decided to buy my mother-in-law a cemetery plot as a Christmas gift.
Then in 2020 I didn't buy her a gift.
When she asked me why, I replied,
"Well, you still haven't used the gift I bought you last year!"
And that's how the fight started.
seanxair, Paultheparaglider, Nick liked this
I add a little excitement, a little spice to your lives and all you do is complain - Q 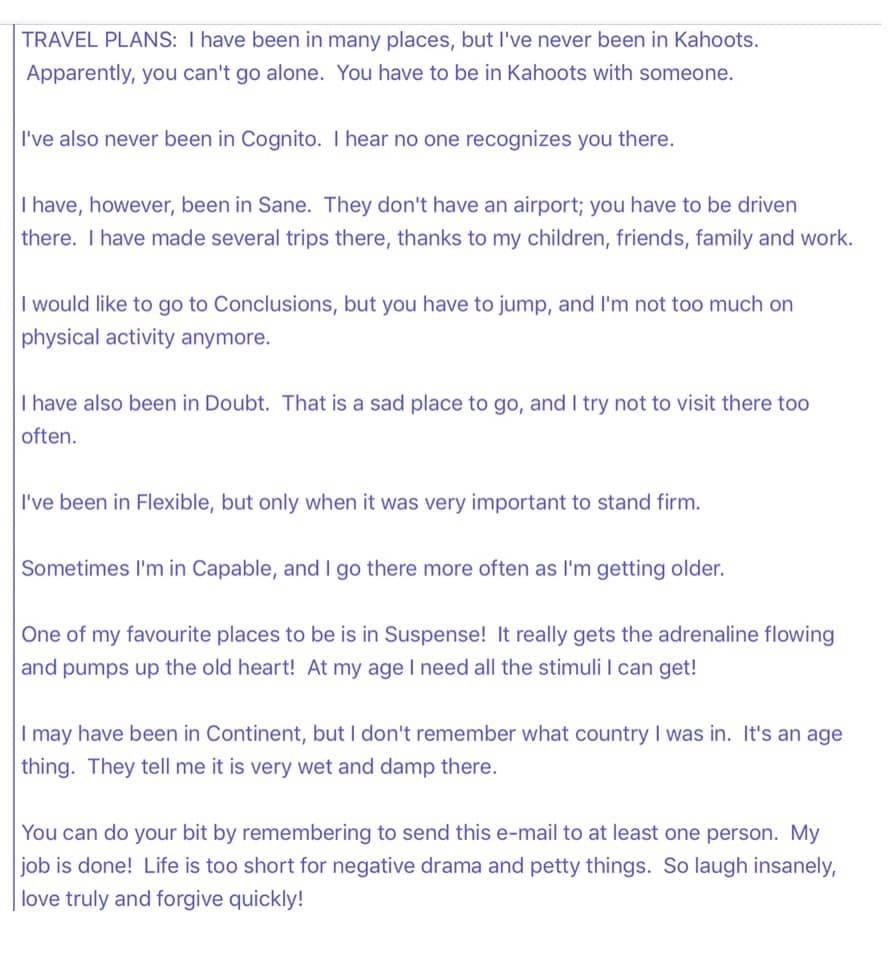 seanxair, Paultheparaglider, Dman and 1 others liked this
Enjoy everything - Life is Short.

Nick
Miscellaneous, skydriller, Boxkite and 3 others liked this

Charles Hunt, Propwash, Cessna571 liked this
I add a little excitement, a little spice to your lives and all you do is complain - Q 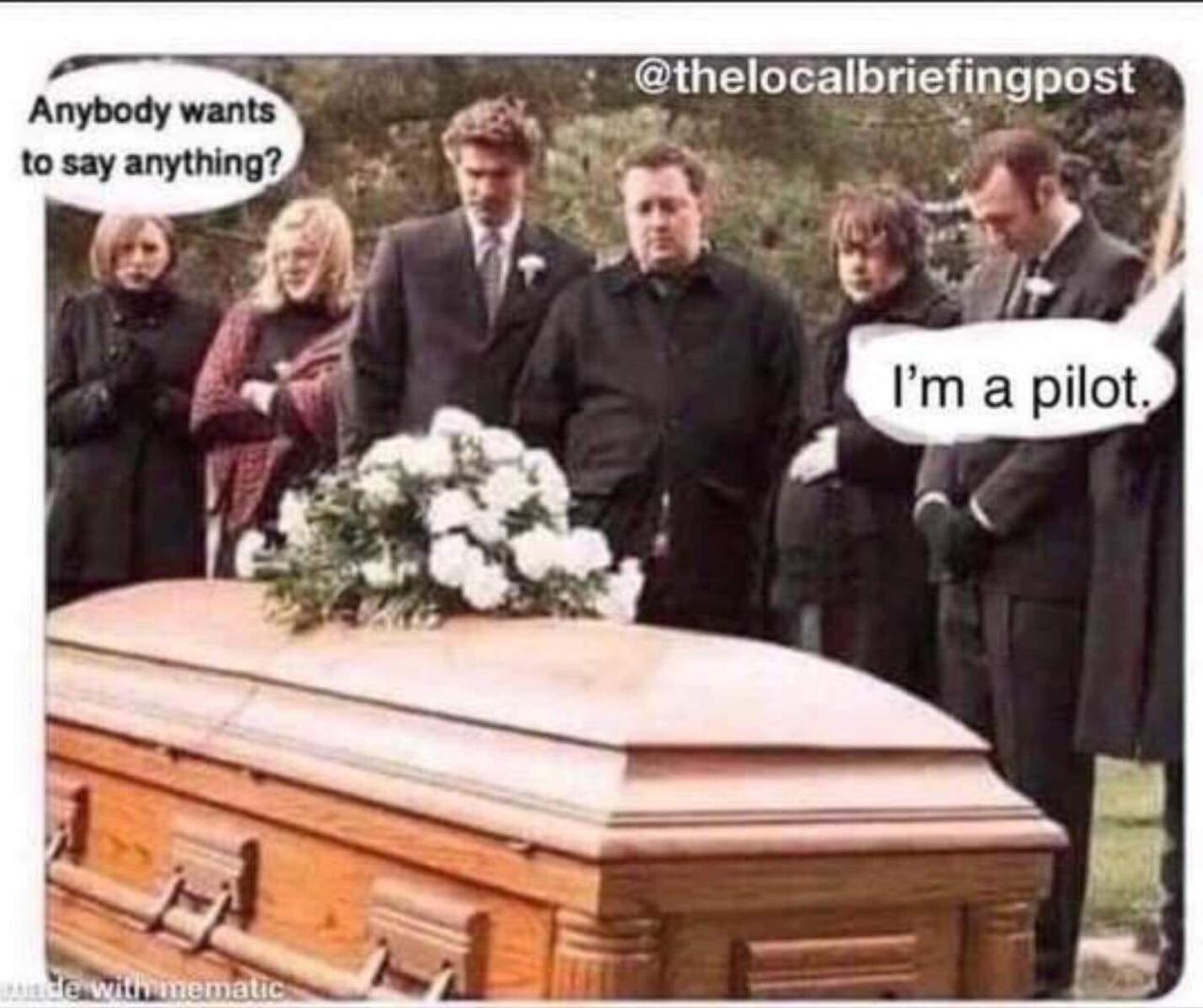