So I was sat down last night when my granddaughter randomly asked me where poo comes from? So after explaining the ins and outs of it she asked me with an absolute look of horror in his face “And what about Tigger”

Blimey, gender confusion even at that age.
Trent772 liked this
GrahamB

How many digital scientists does it take to change a lightbulb?

It just depends whether they’re turned on or not.

She goes out Monday, Wednesday and Friday. I go out Tuesday, Thursday and Saturday.
T6Harvard, seanxair liked this

I reckon we both consider it money well spent

Awful Charlie wrote:Frau AC nearly bit by head off for lack of sympathy after she showed me the blisters on her hands from using the broom so much. I'd only suggested she use the tram like everyone else

You shouldn't have done that! Staying away from public transport is the right thing to do.
T6Harvard liked this
Autocorrect is so frustrating. It's always making me say things I didn't Nintendo. 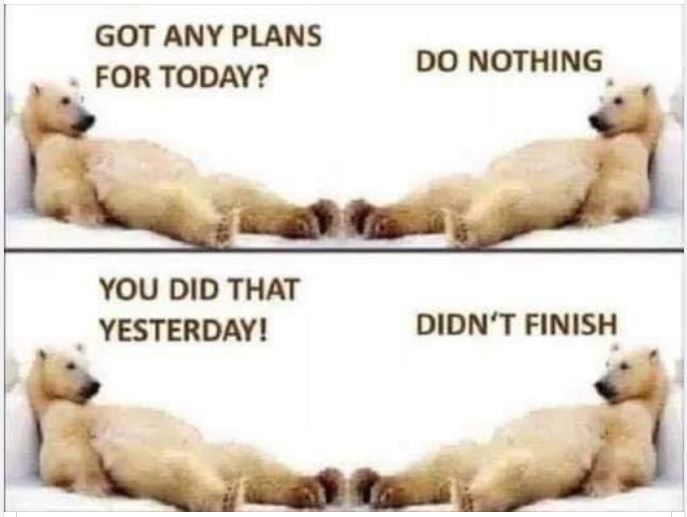 “OK, make a cup with both hands, you’ll get more in”
Propwash, Charles Hunt liked this
Antagonise no man, for you never know the hour when you may have need of him.

Bill Haddow wrote:Or for mathematicians, when it will be "I hate factorials"

Shouldn't that be "I hate factorials" !
Bill Haddow, Paultheparaglider, Smaragd liked this
Enjoy everything - Life is Short. 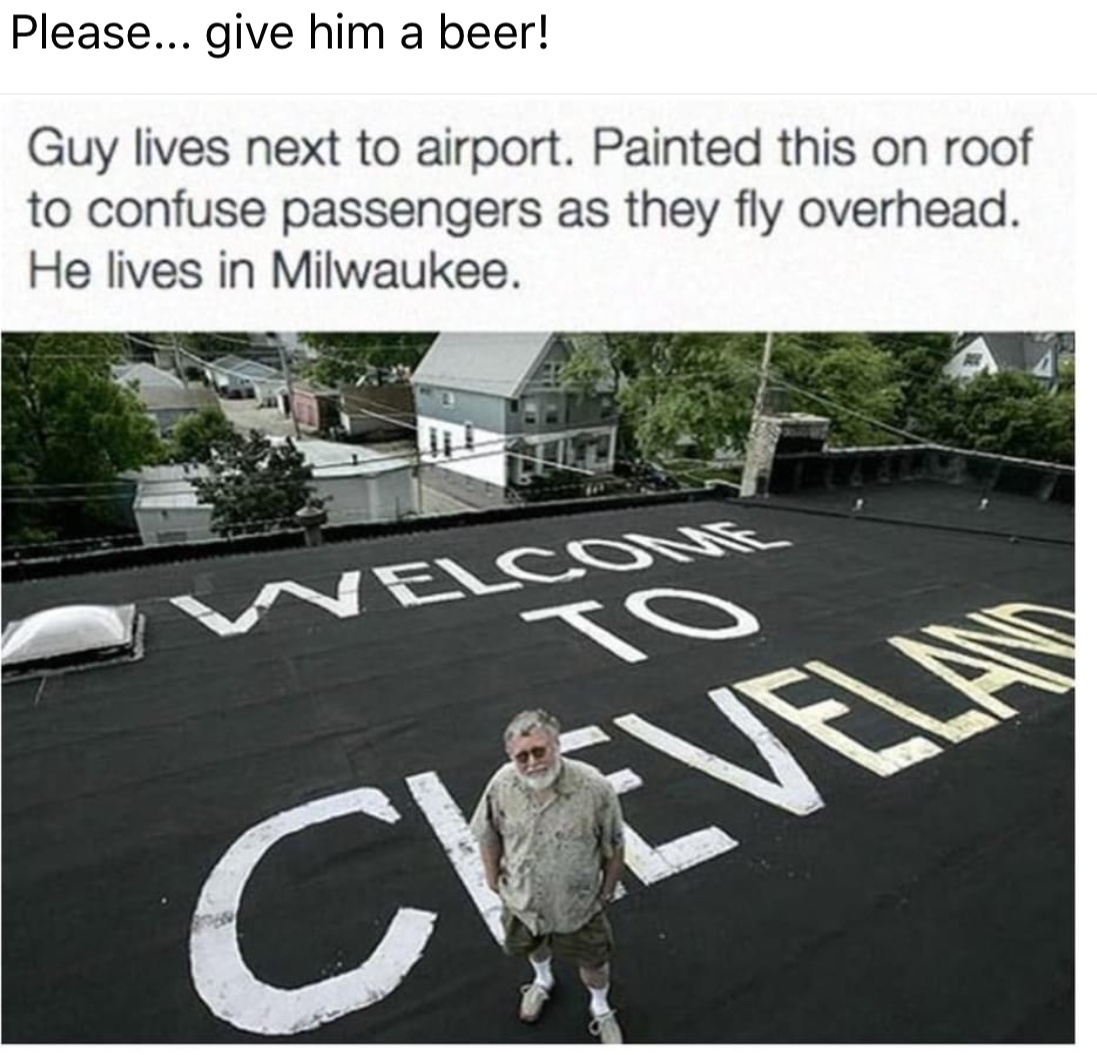 You can sleep in an aeroplane, but you can't fly a house

I got my sister a wooden leg for Christmas. It isn't her main present, just a stocking filler!


Apparently as from the 1 Jan 2001. British emergency services will have to change the emergency sound on their vehicles. Seems like after Brexit they can no longer use EEEE UUUU EEEE UUUU.


I couldn't use the lift at M & S in Leeds this morning as some kid had let off a firework.
I thought that was bang out of order.


We're having a Brexit meal this year it like a Xmas meal but no Brussels.

And his absentee assistant Father O'Way


I have a cow that's always shivering with cold. I think its friesian.


Works Christmas party - Great place to catch up with people you haven't seen for half an hour.


"Do you know, it's at times like this that I wish I'd listened to what my Dad told me"
"What did he tell you?"
"I don't know, I wasn't listening"


Steve, a Sheffield United fan, liked to amuse himself by scaring every Sheffield Wednesday supporter he saw strutting down the street in an obnoxious Piggy jersey. He would swerve his van as if to hit them, then, having scared the living Carp out of them, swerve back just missing them.

This week, while driving along, Steve saw a priest and thought, as it was Christmas, he would do a good deed, so he pulled over and asked the priest, "Where are you going, Father?" "I'm going to give Mass at St. Francis church, about two miles down the road," replied the priest. "Climb in, Father. I'll give you a lift!"
The priest climbed into the passenger seat, and they continued down the road. Suddenly, our Brother Blade saw an Owls supporter walking down the road, wearing the Pigs shirt. Steve instinctively swerved as if to hit him. But, as usual, he swerved back onto the road just in time.
Even though he was certain that he had missed the guy, he still heard a loud THUD. not knowing where the noise came from, he glanced in his mirrors but still didn't see anything.
He then remembered the priest, and he turned to the priest and said, "sorry Father, I almost hit that Sheffield Wednesday supporter."
"That's OK," replied the priest "I got him with the door."


Gillette have finally brought out a razor for dyslexics. It’s the best thing since sliced beard.


Got pulled over by the police last night. He said they were doing spot checks.
So I said “I’ve got two blackheads and a boil on my bum”.


Whoever can tell me how to switch off "auto correct" will have my external Gertrude.


My computer crashed and now all the other computers have slowed down so they can see what's happening.


I just saw passing reindeer wee on some discarded paper which then turned red - Yes, it's beginning to look a lot like litmus.


I've just been given a very expensive pack of ground coffee. It's taste profile states you can enjoy fruit & floral, chocolate, dry fruit, spicy, wood & tobacco, caramel, malt & honey and biscuit.
I only wish it tasted of bleeding coffee.


We've just played the Christmas edition of Cluedo.
My partner murdered Christmas dinner, in the kitchen, with the oven.


My neighbour walked by with two dogs...
I said... "I didn't know you had dogs" He said... "I don't, they are my sisters"
I said... "wow your sisters are ugly" And that's when the fight started, officer


It's amazing how exercise and extra fries sound similar.


My new years resolution is to try and stop putting my foot in my mouth before I say anything, I bet yours is to lose weight.


Why is it that when anyone says ‘phenomenon’ I feel the need to sing a Muppet song?


Brummie walks into a tailors. "Alroit, mate. I'd like a 70s designer suit, please." The tailor says, "Certainly sir, and would you like a kipper tie?" Brummie says, "Ta mate, two sugars please."


I was at the checkout in Iceland and the cashier spotted the item I had left in my trolley.
"You'll have to pay for that too." She said.
"No I won't."
"Why not?"
"Because they're Findus Kippers."


I phoned up the local asylum and asked if f anyone was in Room 51 , the guy came back and said no it's empty , Brilliant I roared I've escaped !


I think its a total disgrace that after only 50 years many people don't know who Neil Armstrong is or what kind of trumpet he played.


I remember hearing a DJ on Capital Radio holding a phone-in on ideas for new inventions.
Somebody called in with an idea for a George Formby grill. Apparently while you were waiting for it to cook your food it would play you a tune on the Ukulele!


I applied to go on that game show, Naked attraction. Send a nude photo they said. Cheeky sods said I was on the short list.


I was fuelling my car up this morning and I tried that thing where you stop at exactly where you want to pay, but I went slightly over and stopped at £20.03, I really wasn't happy as I walked over to pay.
The attendant was laughing and said: "I was watching what you were trying to do and that was very unlucky, don't worry about the extra",
I replied: "Thank you, that's really nice of you", so I gave him a tenner and I walked off.


My favourite childhood memory is my knees not hurting.


Went to Camberwick Green Church with my mates and took up the first two rows, yes it was pew pew Barney McGrew Cuthbert Dibble and Grubb and me. Wow that hurt my brain.


Apple have just released a new gadget to remove the lids from tin cans; it really is an iOpener.


There is a post on Facebook about Thin Lizzy getting back together this year, even without Phil Lynott.
Don't Believe A Word.


Gentlemen make your lady feel extra special. Put a framed picture of her in the kitchen and put Employee of the Month underneath, she will be speechless. Well mine is.

8:20 - The gay couple living nearby threw a hissy fit and moaned it could have been two snow men instead.

8:22 - The transgender man..women...person asked why I didn't just make one snow person with detachable parts.

8:25 - The vegans at the end of the lane complained about the carrot nose, as veggies are food and not to decorate snow figures with.

8:28 - I was being called a racist because the snow couple is white.

8:31 - The middle eastern gent across the road demanded the snow woman be covered up.

8:40 - The Police arrived saying someone had been offended.

8:42 - The feminist neighbour complained again that the broomstick of the snow woman needed to be removed because it depicted women in a domestic role.

8:43 - The council equality officer arrived and threatened me with eviction.

8:45 - TV news crews from BBC, ITV, CNN and SKY showed up. I was asked if I know the difference between snowmen and snow-women?
I replied "Snowballs" and am now called a sexist.

9:00 - I was on the News as a suspected terrorist, racist, homophobe sensibility offender, bent on stirring up trouble during difficult weather.

9:10 - I was asked if I have any accomplices. My children were taken by social services.

9:29 - Far left protesters offended by everything marched down the street demanding for me to be arrested.

By noon it had all melted

Moral:
There is no moral to this story.
It is exactly what we have become.....all caused by Snowflakes.
flybymike, Charles Hunt, mick w and 5 others liked this
I add a little excitement, a little spice to your lives and all you do is complain - Q