After several repeats he contacted the man he'd bought it from who turned up, picked up a baulk of timber nearby and hit the donkey at the back of the head. He then slapped it's bum and off it went.

"You see you first have to get its attention" said he to the new owner
Bill Haddow, cockney steve liked this
John Milner Fairly tolerant PPL/IR flying a TB 20 from Gloucestershire 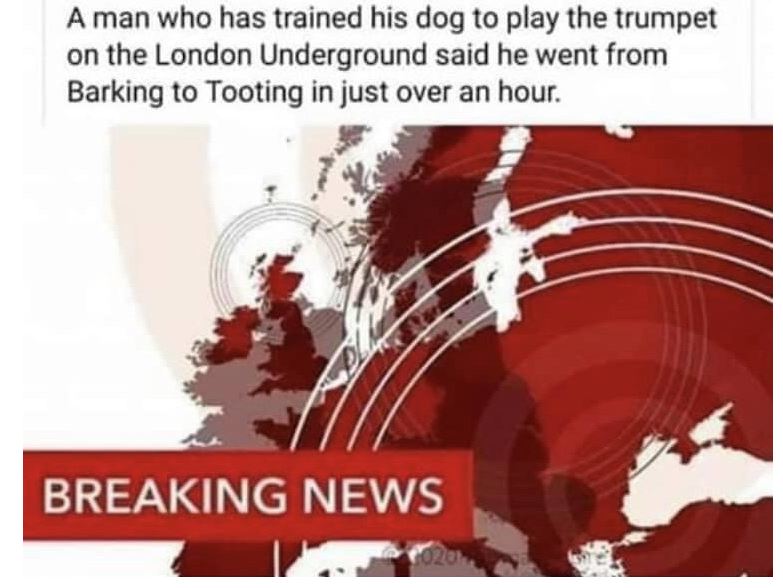 By Trent772 -  Fri Aug 21, 2020 7:07 pm
Like 5
Fri Aug 21, 2020 7:07 pm #1791938
The Wankel engine:
"A type of internal combustion engine using a rotary design to convert pressure to the main shaft from an external source. A smooth combination of turning and sliding is the result. The ordinary piston engine is known to knock or misfire with poisonous emissions. Noisy banging often occurs in worn big ends, but the Wankel system enables uniform head torque, delivering more thrust with less vibration. The result is a pleasurable drive for the end user. In time the shaft may become a little eccentric, but a quick tool adjustment will restore the Wankel efficiency. Hard drivers will still need to flush and lubricate every 12 months to avoid build up of sludge."


I've got no problem with genetically modified food.
I've just had a lovely leg of salmon.....


I called Sea World the other day. I spoke to a lady who said that my call may be recorded for training porpoises...

Just to let everyone know, I had the Russian Covid19 vaccination yesterday and can tell you it’s fine. There are absolutely nyet negative sideffski effectovski Кто может это прочитать Обожаю Владимира Путина!


My doctor told me to marry a ukulele player, i asked if it would extend my life and doctor said no but it will seem a lot longer!


I went to the doctor recently for my very uncomfortable prostate examination. The doctor said it’s not unusual to get an erection during the procedure. I said I don’t have one. He said he wasn’t talking about me.

My budgie broke his leg so made him a splint out of a matchstick.
Should've seen his face light up when he walked on the bottom of the cage.

Warning, if your going to buy a watch from Amazon and it says you can swim with it remember you have to be able to swim without it first.

My postman has changed his name and gone to live in Spain with his black and white cat. He’s become an ex Pat.

Having taken down my entire collection of Dusty Springfield LP's, I just don't know what to do with my shelf...

Went to the doctors and he told me i needed a pacemaker. So now I've got this annoying Kenyan 2 yards in front of me everywhere I go!!!

My wife rang me on my mobile today and said “Where the hell are you?” I said “Can you remember that jewellery shop we looked in on Saturday? The one that had those earrings you liked in the window?” “Yes” she said, in a much more cheerful tone. I said “Well I’m in the pub next door”.

Just filled out an online diabetes awareness survey, the first question was ‘ do I except cookies ‘ I’m guessing this is a trick question.

I walked up to a female member of staff in Tesco today and said, "Do you know where the Weight Watchers meals are?"

"Fair enough," I said, "Let me show you."
akg1486, JAFO, avtur3 and 2 others liked this
I add a little excitement, a little spice to your lives and all you do is complain - Q

So he came back to England (Bedford actually) to see his GP and seek treatment:

His GP, Italian by birth, (well it was Bedford) took a look and said: 'I'ma sorry I can no help you, but I'ma gonna send you to see my cousin Luigi in Napoli.'

Brit ' Oh good, is he an expert urological surgeon?: Will he be able to operate and cure me?

GP. ' No , he's a piccolo player, he'll a teach you how to hold it.'
Charles Hunt, avtur3 liked this
Pete S as was

YYY = Delilah
gasman, Charles Hunt liked this
I add a little excitement, a little spice to your lives and all you do is complain - Q

<edited to correct poor grammar!>
T6Harvard, kanga, eltonioni and 2 others liked this

One year George and Betty went to the show, and George said, 'Betty, I'm 70 years old. If I don't ride in that helicopter now, who knows, I might never get another chance'

The pilot overheard the couple and said, 'Folks I'll make you a deal. I'll take the both of you for a ride. If you can stay quiet for the entire ride and don't say a word I won't charge you a penny! But if you say one word its fifty quid.'

George and Betty agreed and up they went.

The pilot did all kinds of fancy maneuvers, but not a word was heard. He did his daredevil tricks over and over again, But still not a word...

When they landed, the pilot turned to George and said, 'By golly, I did everything I could to get you to yell out, but you didn't. I'm impressed!'

George replied, 'Well, to tell you the truth I almost said something when Betty fell out, But you know, "Fifty quid is fifty quid!'
Charles Hunt, MikeE, JAFO and 1 others liked this

PeteSpencer wrote:A Brit who had spent a year living the high life in Bangkok had picked up so many STDs - sexually transmitted diseases - that he developed a number of fistulae-holes- (It was a medical joke I've had to modify) in his todger that every time he pis sed, it sprayed everywhere.

So he came back to England (Bedford actually) to see his GP and seek treatment:

His GP, Italian by birth, (well it was Bedford) took a look and said: 'I'ma sorry I can no help you, but I'ma gonna send you to see my cousin Luigi in Napoli.'

Brit ' Oh good, is he an expert urological surgeon?: Will he be able to operate and cure me?

...and anithrr version of that joke goes something like “here’s a week’s pass to Dinant..in Belgium..to deal with your problem”

“Why? Do they have someone there that can cure me?”

“Oh hell no, but they invented the saxophone - they will at least be able to show you how to hold the damned thing!”

OCB wrote:...and anithrr version of that joke goes something like . .

And in the Lanarkshire version the damage was caused by a shotgun and the expert was a leading light in the Larkhall Royal Purple True Loyal Sons of William Flute Band.


Guys when your woman is overreacting just tell her to calm down and she will realise that your right and go quiet - let me know how you do.


I asked the librarian if she had any books by Shakespeare. Which one she asked ? William I answered.


Having trouble understanding top heavy fractions? Our helpline is open 24/7.


Make a note in your diary as Mitchell's Camping will be having a mega sale soon. Yes they have said it's going to be the winter of our discount tent.


I came, I saw, I forgot what I was doing, I retraced my steps got distracted on my way back have no idea what's going on, and now I have to pee.


Many years ago during my wife's labour, the nurse said, "How about Epidural Anaesthesia?"
I said, "Thanks, but we've already picked a name."


Just finished my Pest Control exam.
Hope I boxed all the ticks.


After years of marriage, I've finally learned the ultimate secret to keep a woman satisfied in bed.....Let her sleep.


I remember years ago telling my Mum I’d won the Leslie Nielsen Award at school.
“What’s that?” she asked.
“It’s a big building with lots of teachers and pupils, but that’s not important right now”, I said.


It was the inventor of the dishwasher’s funeral today. The coffin was lowered into the ground only to be taken out by his wife and put back in properly.
Pete L, mick w, flybymike liked this
I add a little excitement, a little spice to your lives and all you do is complain - Q

Trent772 wrote:I remember years ago telling my Mum I’d won the Leslie Nielsen Award at school.
“What’s that?” she asked.
“It’s a big building with lots of teachers and pupils, but that’s not important right now”, I said.