But I've watched lots of my passengers over the years try and fail to identify quite large and obvious ground features, often only a mile or so away. And I've read a lot of comments here about how mind blowing it all is at the beginning. So I don't think it's controversial to suggest that low hours students barely out of the circuit often have at least some difficulty translating what they see on the ground to what's depicted on the map and vice versa.

lobstaboy wrote:The point is that the reference point is chosen to be unequivocal, easily identified and only five minutes or so away. We aren't talking about flying for half an hour and being ten miles off track.

What this says to me is that if you plan a route as you describe here, you'll simply never go wrong, because the waypoints are close together and unambiguously and easily identifiable. This sounds like a fiction that bears no relationship to my early reality.

My routes almost always looked like this on the map, and although as you say,

Getting it right depends on good planning

, failure to plan properly was never my problem. I was always meticulous to the nth degree during my training.

Once I was in the aeroplane, though, and the workload was high, somehow events often conspired for all that to go out of the window. I'd fly the wrong heading for a few minutes, then mis-identify something and/or write down the wrong ETA for the next waypoint, then make the wrong correction, and it all went titsup.com quite quickly.

This period didn't last all that long, for the same reason everything else gets easier with practice, and I got it all sorted out in the end.

I just think it's a bit glib to say effectively that it all boils down to choosing good waypoints and if you do that it will all be fine. I still think that if you need to, if it doesn't come immediately, you still need to pay attention to learning to look, and really see.

It's all moot now, though isn't it? With the magenta line, no one gets lost or infringes any more, right?
Milty liked this

I can't parse this statement.

In which case, yes of course, obviously this is true. The half-mill at least has has been getting progressively worse in recent years due to thick airspace boundaries and notes obscuring ground details that used to be shown.

During the planning stage features on the map close to the planned track can be noted or circled so that they can be identified on the ground during the flight.
Eg, At 1105 we will pass a large lake on our left side. It has a small wood on it’s south side.
It should be 3 miles away if we are on our planned track.

Looking out of the aircraft for features and then trying to find them on the map is much more difficult. But still useful when lost to identify a ground feature and then check for it on the map. 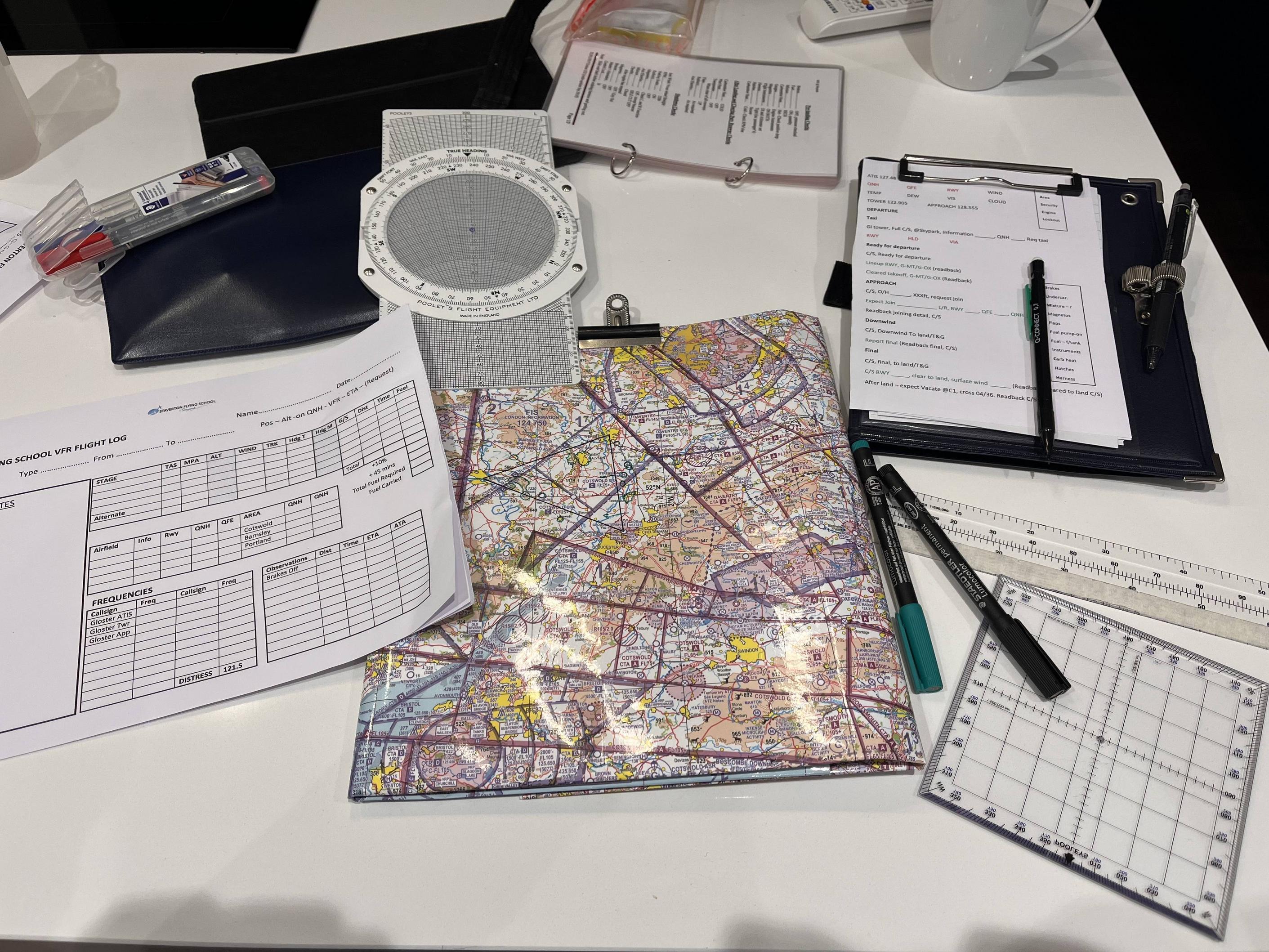 You've reminded me that I haven't got a protractor yet

). Planning on sitting it next week

Comms is easy. Get on with it!

FLYER Club Member
Like 2
Thu Jan 27, 2022 10:23 pm #1896078
I disagree. Puppies are killed every time you get the order of information wrong in a position report or you say degrees when you don’t need to. And you need to be able to calculate the distance you will be able to contact a radio station by adding your height to the height of the station, taking the square root of that and then multiplying it by 1.23. Genuine question, has anyone ever done that in real life and why?
ericgreveson, T6Harvard liked this
Student PPL, started Aug 21, C-152, EGBJ

Milty wrote:Genuine question, has anyone ever done that in real life and why?

Not me. I give them a call, and if they answer that almost certainly means I am in range.

Rob P
Milty, T6Harvard liked this
"We sleep soundly in our beds because rough men stand ready
in the night to visit violence on those who would do us harm."
- George Orwell-

FLYER Club Member
Like 4
Fri Jan 28, 2022 9:56 pm #1896208
Not quite the lesson I expected today but good all the same. Was hoping for first solo nav but ended up doing as planned but dual. Driving to the airport, weather was looking ok but getting closer, there was a bit of shallow fog. Instructor was not comfortable to send me off on my own in those conditions. Whilst tedious, I thanked him later.

Did my first proper full pre-flight which was all interesting stuff and will aim to do them every time from now on. All good practice.

Time ended up being a bit tight so I confess to a small cheat using SD to fill in the blanks on the PLOG. I will do a couple of manual practices over the weekend to be sure I didn’t lose the learning opportunity.

Take off all fine and within a few hundred feet, we were above a very pretty looking fog bank that was drifting up the Severn. It was like flying at 30,000 but only at 2,000. It did make the first part of nav a little tricky with no ground reference but encouraged to see I was pretty much where I should have been when we could eventually see Ledbury.

Instructor had me practice switching to London information for a basic service which was something new and all good practice. Reported turns at Hereford and Worcester. Did go a bit off course by Malvern but realised and corrected.

The last leg was where I was thankful to have the ballast next to me. Turning south from Worcester, there was just solid cloud/fog below us. Had I been on my own, I think the cockpit would have been full of the smell of fear. A nice chat and intro to what an ILS approach would look like but actually, as we got close, the airport was pretty clear so a SOHJ to get down. That again all seemed natural re positioning the aircraft, descending dead side etc. circuit rejoin was pretty good and the landing was ok. Nothing to write home about but all bits still attached. I still think I need to work on landings - let’s just say they are happening OK but I wouldn’t say I’m fully sure why or how. But I’m still learning so expect it will come.

Personal critic time - I need to listen out and pay more attention to the radio. There were a couple of times that I was merrily trundling along with a dopey grin on my face and the radio crackles into life. I was aware of it, but didn’t actively listen. My instructor looks at me in anticipation of me answering but I hadn’t a clue so he kindly stepped in. I’m also not 100% sure I would have made all of the calls I should have were I on my own but I can’t be sure. I know them all, but remembering exactly when to do them may need a bit of work. I do think that when I’m on my own, it will fall into place. I can do it all when I chair fly. Altitude control on the first leg was better but still needs a bit more work. I just get so overwhelmed with excitement that I’m flying again that I think my focus lapses a bit at the start.

The timing was perfect. 15 minutes after landing, you couldn’t see 200m across the airfield.

As an aside, there was a bit of larger jet activity today as the bigger boys ship out before the main runway is closed for resurfacing. 04/22 looked close to being finished from the air - it had numbers and lines on it anyway.

So, hopefully next week will be the same again but without someone to chat to in between FREDA checks.

FLYER Club Member
Like 1
Fri Jan 28, 2022 11:04 pm #1896215
Don’t worry too much about not hearing the radio. It seems to develop as your other skills become ingrained - perhaps just that little bit of spare mental capacity.
Milty liked this