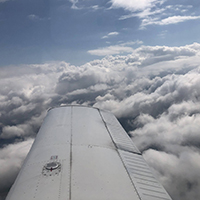 I've been lurking on here for some time following the good craic and thought I'd introduce myself.

I'm Chris, 45 and - hopefully when the school opens later in March - will be embarking on a lifetime ambition to get my PPL and eventually CPL. Another lockdown career changer, although at my advancing middle age I'm not counting my chickens just yet and my primary objective is to achieve it and have a lot of fun on the way up.

I've picked a school and I think I'll be doing my thing in the PA28, although I've yet to go down and actually meet them with the lockdown restrictions. Any advice on what to look for in a school?

Managed to get the full set of AFE PPL books on Ebay and I think they're fairly recent editions so study starts in earnest when they arrive on Saturday!

I can't express how thoroughly excited I am to be embarking on this journey and looking forward to badgering you all for tips and tricks once I get started.

All the best, Chris
Rob P, JAFO, WelshRichy and 2 others liked this

Have you had any introductory flights / been up in a light aircraft? How did you feel?

I only ask because I am just starting out (7 hours) hobby only, and am totally addicted

Yeah, I did an introductory flight about 15 years ago and it was magic - absolutely loved it and got to do some target practice on little clouds over Bamburgh. It's taken this long to be able to think about affording this. (Applied for pilot training as a yoof but didn't end up getting the A-Levels). Other than that I have about 33 years experience badgering pilots to let me in the cockpit although now use my odlest son as a convenient excuse;) whenever I fly for work or holiday.

Oh man, I'm desperate to get stuck in. Have to wait until mid-March to join the club with the lockdown.

Treat your training as something you want to do for your own sake because you enjoy it, regardless of future commercial aspirations. I'm a PPL myself (soon 17 years, around 550 hours) and I've never once regretted the investment in time and money over the years. Flying has given me both new friends and unforgettable experiences.

T6Harvard liked this
Autocorrect is so frustrating. It's always making me say things I didn't Nintendo.

We’re a friendly bunch here really, but I think not being able to meet up in real life as we used to is taking its toll.

Where are you in the country?

Someone will definitely know of the school you’re considering and you may be near other pilots.

Other pilots even offer some flying to students on a pass it on basis.

I still have 2 flights which I have to repay by offering free flights to students.

When we can.. I’ll be passing those on.
(I’ve already passed on others)

Have fun, and ask questions, everyone loves reliving their training. (me included).

Most fun flying you’ll ever do.

So I’m based up in the North East in Tyneside and I want to do the PPL at Eden Flight Training in Teeside. Approached Newcastle and they were just too expensive - one of the lads there recommended looking towards Yorkshire/Teeside area.

The school were really friendly and I got a good vibe from them on the phone.

Got my books in the post today, so ready to start!

One question I do have. The AirNav (Pratt) book I have is a 2013 print which is obvs going to be out of date. Are these reprinted yearly or is it worth diving in and hen refreshing the knowledge from more recent CAA docs?

Although air law is one of the first you need to take, don’t touch that either, it’ll put you right off if you touch it before you are flying.

I can’t remember the titles, the course book is worth reading through, lesson by lesson it explains the whole course.

I really enjoyed “how an aircraft works” (can’t remember the title).

RT is fun and useful.

You could read air law, but put it down quickly when you get bored.

(Other views are available, this is just what I think)

The books that you have should be sufficient for your learning, apart, perhaps, from Air Law - that is the subject that has changed most over the years. Start with Principles of Flight and Aircraft General Knowledge, then have a quick read of Human Performance and Limitations (you'll find that if you understand GCSE level biology and physics, that will be quite accessible). Unless you're a lawyer, Air Law is likely to be a bit dry, but you will probably need to have passed that exam before you're allowed to fly the aircraft solo - your particular club rules will govern that.

If you're intending to continue past PPL to CPL, you will need a Class 1 medical - it's well worth the time and expense of getting that pretty soon.

Oh yes, and there's no such thing as a silly question!

When we're free from house-arrest again, I'd suggest you look for a GASCO safety-evening, somewhere near you. They're usually free, you don't have to be a pilot, and there is usually a guest speaker as well. The bonus! - you get a free copy of "the skyway-code" Plus a handy cockpit guide and several other useful bits n' pieces (did I mention the pen and the excellent TRIG keyring?

Skyway Code is a synopsis of the important stuff you need to know, It's kept up to date and you can download it as a free PDF (GASCO,org.uk ) Hard copy is under £20.

Apparently exams are now on-line and changing rapidly, with much bigger question-banks, so you are unlikely to be able to memorise the answers! just learn the subjects! As several have advised, the physics of flight and the mechanics of engines have not materially altered in the last few hundred years.
Our understanding of meteorology and human performance has improved slightly over the last half-century or-so , but that's not really relevant. Navigation is another unchanged skill, much the same as when Chris. Columbus was a lad.- though the CAA has finally accepted that GPS is here and works

Plenty to get on with, even though you can't actually fly yet. The more you know, the easier the transition to practising the theory! It may be worthwhile buying a handheld radio with 8.33 channel -spacing.
you cannot legally transmit, except under supervision of a FRTOL -holder, - but you can listen-in and get used to the "patter". A licence for the set is only £5 for 3 years. used stuff appears on Ebay, AFORS and this Forum among other sources. As the 25KHz sets only became obsolete ~3 years ago, it's likely an 8.33 set will be in good condition. Many pilots keep a hand-held as a backup, in their flight-bag.

Hope this is of use, Steve.

Sorry when I was talking about the books earlier I meant AirLaw not AirNav! That's the one I suspect is hopelessly out of date. Is that one reprinted every year?

Also for the ATC radio, what am I looking for? I had one many years ago, is it just an airband radio?

I'll post a link when I have a moment

Rob P
editmonkey liked this
"We sleep soundly in our beds because rough men stand ready
in the night to visit violence on those who would do us harm."
- George Orwell-