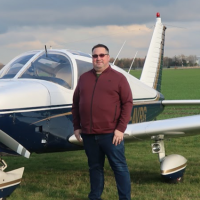 I finally went out on my trial lesson an hour flying around the cotswolds. An awesome feeling even with the odd bumps thrown in. It was on the 3rd occasion due to the poor weather.

As recommended I spoke to a few AME and the local one was worried mostly about my weight but agreed that if the CFI okayed my ability in the plane it shouldn't affect the class 2/LAPL process. However losing the weight between now and my solo would be wisest and do the medical when I am 7-8 hours in. Which will probably be April/May if I'm lucky with the weather and bi-weekly lessons.

I've read some helpful guides, however still confused - what is mandatory from an equipment perspective, I see most shops (like pooleys) do student packages, but I'm sure there are a number of items i don't need and the bags look a little rubbish. 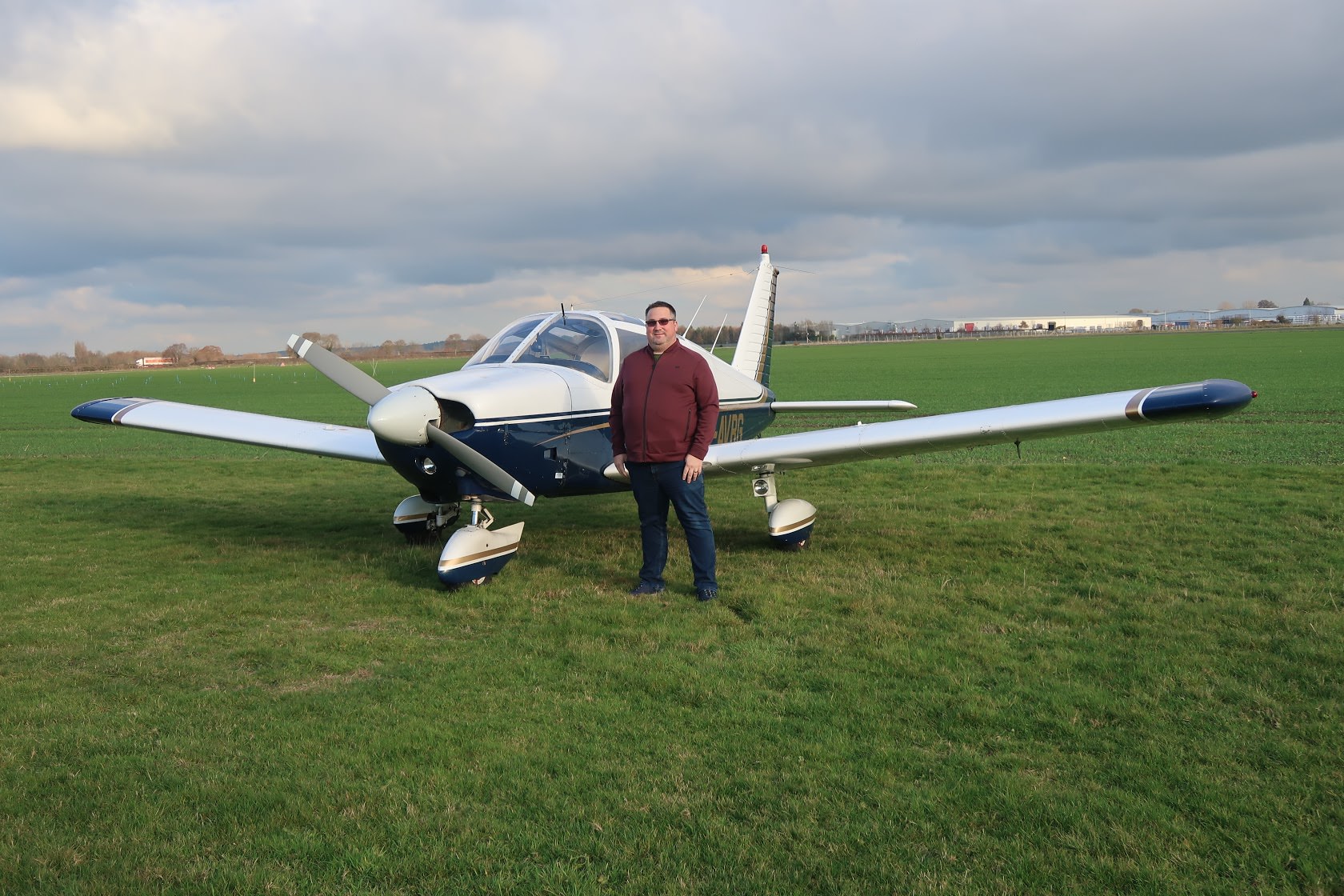 To begin with you need absolutely nothing in terms of equipment. As you learn you will realise what things you really do need - and best to ask your instructor as you go on (but beware that the school would love you to spend lots on kit!),
Rob P liked this

A lot of the kit is only going to be used for the purposes of passing the exams! I'd suggest Ebay ,Afors , Amazon, maybe Loot , Freecycle...... will throw up used items at half (or less) than new price.

The main PPL course-books come in sets.....With very minor variations, they don't change. Clouds, wind, rain, ice all still form exactly as they did in the Wright- Brothers' day
Engines still work fundamentally the same.....Maybe electronic ignition instead of Magnetos, injection instead of a carburettor.....but they still have the same purpose.
Humans still breathe, still suffer oxygen deprivation at altitude......and so on.
The physics which govern flight, still remain the same. A wing will still run out of lift if it's "angle of attack" is excessive. (some aeroplanes are "unstallable", but that's only because the critical angle isn't passed! Drag still presents for the same reasons, as does carburettor-ice and mixture-enrichening.
Principles of navigation remain unchanged, indeed it became more accurate to perform, once Harrisson perfected the Chronometer. (yes, currently you need a stopwatch (couple of quid kitchen-timer!) and a "whizz- wheel" (circular slide-rule) ,ruler, protractor(maybe) and a chinagraph pencil or erasable fine-marker. An up-to date chart is desirable but as they're out of date before they're even printed, don't get anal! (after you pass your skills test, you'll probably abandon the early 20th Century and use Sky- Demon/GPS for Nav.)

That brings us to.........Air Law! Again, like Charts, it is constantly changing and is the only book where an up-to- date edition will be worthwhile splashing the cash for....but, I'd put -off purchase until you really need it..
If you're unlucky, they'll have rewritten the exam-papers and the questions where the law's changed, will only be a few months outdated, but never fear! Whether you answer a "wrong" question with the answer that applied when the question was set, or answer the current situation , (add a note on the sheet)correctly you'll get a pass for a correct answer! Current posts here suggest the exams are at least 2 years out of date!


There are several "question and answer banks of varying cost, available Apparently they are excellent for learning how to pass the exams!

This month's"January" Flyer magazine encloses a glossy catalogue from POOLEYS Which gives you an excellent idea of what's available, if you have the need to rapidly slim-down your wallet! (you'll get some free Flyer issues if you subscribe!) (nearly forgot, there was also a £60 -off a £100-or-more case of Naked Wines (12 bottles) in with the magazine

Finally, look at the LAA website and the BMAA website, (other sources available) for" GASCO safety evening".......held at various airfields/flying- clubs, as near as dammit, free, informative, friendly, and , a plastic wallet with a pen, a jolly good"cockpit -companion"(stuff like ground-marshalling signals and light signals, runway and taxiway markings.....a preflight checklist.......and, not least, a free copy of "the Skyway-code" which basically condenses almost all the stuff you need to know, into one book.. Normally, it's about £15 and it really is worth that! I attended and there was everything from a multi-thousand hour pilot, to those who'd just taken their first lesson!

Note, I'm an enthusiast, I'm not a qualified pilot. Others on this Forum will be quick to point out the shortcomings in the above!

Your school will tell you which checklist they prefer and that’s about it for quite a while.

Add a map later on, a ruler, a protractor, a China graph pencil, at that stage a knee board comes in handy, you’ll need a whizzwheel too.

Buy the course books as you need them.

It’s really not about equipment, it’s about listening to every word your instructor says and trying to understand it, it’s about asking him every question you can think of, it’s about laying out a couple of sheets of A4 on the dining room floor and flying circuits around them, and practising overhead joins.

Remember your training will be some of the most enjoyable flying you ever do, don’t rush it.
Rob P liked this

If you are committed then buy a decent headset. I learnt with the standard £300 David Clark which was absolutely fine. When it came to QXE I splashed on an A20 and it makes a huge difference to fatigue. These are £1k new though so make sure it's what you want.

In terms of a bag, I waited until I qualified and bought a smart back that holds two headsets, map, kneeboard and all the instruments. It says PILOT on the front and sides and I love it (it is genuinely useful). Because you know, people will know you are a pilot and these things are important. I almost bought a jacket but stopped myself...so even I have limits.

What a great incentive to lose weight - keep us informed of your progress on that front and the flying.

I think Cotterpot is meaning that it’s a generally held belief that a breitling watch, a pair of A20’s etc won’t make you a better pilot (and they won’t)

Students are usually advised to use the school headsets and save the £1k for more training.

I did this and only bought my own headset after qualifying.

I don’t think Alex is taking the ****, I think some just like headsets. Sometimes you can buy a cheap pair from a student who rushed out and bought a pair of A20’s and six months later stopped. Sometimes because they ran out of money!!

It may appear he is taking the **** because if the ribbing that sometimes goes on about breitling watches etc. He’s just got a different view. Each to their own.

Good luck with the flying. Have fun! Report back often!

My standard weekend bag which I'm still using was obtained this way. It has "Today's Pilot" on it. That magazine had some good free stuff, including the aforementioned bags and AFE guides for being a subscriber.

The bag's now slightly torn. I wish I'd stocked up on them (I think they were also selling them for, IIRC, £3 in the end) when I could! It's a good bag, just the right size.

(From the manufacturer of plimsolls, not the fine kit aircraft)

Seriously though @Weirdjam , resist the temptation to spend money on inessentials or overly expensive kit, you don't need it. I blundered through to my PPL using the school headsets and carrying my kit in a cheap bag I bought from Next. It is perfectly possible.

Those who have blown a fortune on expensive headsets will tell you how it transformed their lives, made them more attractive to members of the opposite sex and guaranteed them a win on the Euromillions. In my marketing days we knew this as 'post-purchase validation'. You will largely be flying hour long sorties, you don't need the very best, and a decent passive headset will 'protect your hearing' from the roar of the mighty lycoming (That's the engine) adequately. If your club don't have halfway decent headsets then we'll revisit this topic (endlessly)

Good luck with your weight loss. What a pity Craig (Nighthawk) isn't around here much - he has transformed himself over the years.

And good luck with your flying training - it's a blast!

AFTERTHOUGHT: I did buy a chart very early on. It takes months to learn how to fold it; I spent hours poring over it and planning all the flights I would do once qualified.

Re the headset, I personally find it a relief when the ANR switches on, I am not a fan of loud noises and whilst I was fine with the DCs, when you start to get to the end of the course and fatigue can become an issue, the "clear head" was a real plus for me. Not because it is expensive, but because it does a good job. Most I think would agree that it is the first piece of expensive equipment any pilot buys if they are committed as those that get lent out are of poor quality.

Please be assured that I am nothing but supportive of the addiction that is learning to fly, I only have a handful of hours since passing and am always enthused by others about to start the exciting (but sometimes very frustrating!) journey.
MarkOlding, Flyin'Dutch', Straight Level liked this

Never understood this sentiment. What would be wasted about getting some hours dual instruction and being in the air, even if the full PPL wasn't possible?
Flyin'Dutch', Rob P, MachFlyer liked this

Rob P
MachFlyer liked this
"We sleep soundly in our beds because rough men stand ready
in the night to visit violence on those who would do us harm."
- George Orwell-

It's all flying.
Flyin'Dutch' liked this