Flying at 50 -The Journey commences

Will you need a haircut?

Seriously though I can't imagine a better environment from which to carry on your flying training.

All gone a bit pear-shaped for me as I've just failed my class 2 medical on high blood pressure. I think it's white coat syndrome as I've been keeping an eye on it in the week leading up to the medical and its been within limits. Even when i got home today after the medical it was OK. Just to be sure, I went out and bought a new Omron monitor just in case there was a problem with my old one. That was fine too.

. Hopefully it's just going to be a bit more faffing about; I'm kinda getting used to it!

Well done!
Imagine what you might try if you thought you could not fail...

t1m80 wrote:All gone a bit pear-shaped for me as I've just failed my class 2 medical on high blood pressure. I think it's white coat syndrome as I've been keeping an eye on it in the week leading up to the medical and its been within limits. Even when i got home today after the medical it was OK. Just to be sure, I went out and bought a new Omron monitor just in case there was a problem with my old one. That was fine too.

Sorry to hear that. I failed my class 2 renewal just under three years ago because of high BP caused partly by bad genes and partly by lifestyle. I was 51 at the time. After starting medication, and waiting a few weeks, I took and passed the medical. Now I get a regular checkup by a GP once a year, in addition to the yearly class 2 medical. As I see it, failing the class 2 medical back then was a good thing: it uncovered a health problem I didn't know I had. (For those of you who don't have high BP, it's not something that you can feel that you could feel irregular heartbeat. There can be the occasional headache that could have any number of causes.) The only drawback is that I can't eat grapefruit: there's a substance in it that works against one of the pills. But a very small price to pay.

Surely medication could work for you, too? By bringing down the general level, even the peaks you get when seeing a lab coat could be lowered to within the limits? AIUI, the limit for the class 2 is also the in the region for when a GP thinks you should do whatever it takes to lower the BP: exercise, weight loss, medication,.... There are several doctors on this forum; someone may comment on that.

(The above is not an expert opinion; I am not a doctor. Speaking to your GP and your flight doctor about how to cope is the only way forward.)
Autocorrect is so frustrating. It's always making me say things I didn't Nintendo.

Yes, I was only just in limits with my previous medical and so I did change what I was doing foodwise and exercise wise. You're absolutely right, it did make a huge difference and the biggest difference for me was exercise. I wasn't really getting much and pretty much as soon as I started getting more exercise that brought my BP down significantly. So I had been conscious of my BP since then and kept a close eye on it. Which is why I was kinda shocked that it was so high in the examination.

I've been using my new monitor since (it records history whereas my old one didn't) and, so far, I've been within limits - higher than I would like to be fair, but not over the 140/90 limit set by the CAA. As I understand it, if I can keep it that way for a few more days, then I am able to sign a self-declaration with the results I have taken and should be able to get my class 2 certificate.

I have also booked a check-up with my GP though, just to be on the safe side because it was absolutely through the roof when I was with the AME! I'm curious to see what happens...

No news on the BA Job / training yet. Expect to hear next month about my training start date, which might be something like March. So my plan will be to finish my ppl before i start my cabin crew training.

No flying for a month for me unfortunately. Weather, Instructor holiday, my holiday. So hopefully flying again week commencing 11th Nov.

. I'm so close it hurts but I might as well be a million miles away! 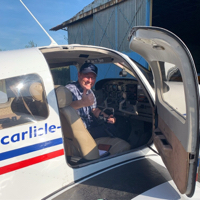 <snip to save space>


Sent from my iPad using Tapatalk

StueyN thanks for the follow and congratulations on your PPL. Have you been up on your own since?

Last Tuesdays nav lesson, talking to Southend, was cancelled at the last minute due to weather closing in. Still it was great to catch up with my instructor. So fingers crossed for this afternoon. Morning sun and cloudy afternoon is forecast. Lesson is 2 - 4.

No further update on the BA job. Just waiting for training start dates. I presume its a demand driven process.

By StueyN -  Tue Nov 19, 2019 8:24 am
Like
Tue Nov 19, 2019 8:24 am #1730825
Yes, had a couple of hour long flights, the second with my first passenger (younger brother) in CAVOK over the Lake District. Amazing. Another planned for yesterday with my wife was thwarted by freezing fog at Carlisle Airport with the rest of Cumbria CAVOK. Aviation can be frustrating but is 99% fantastic. Good luck with your remaining training!

However, good news on the job front. The BA Job starts on the 7th April. 6 weeks training and then whatever the first roster is. Based out of Gatwick. I got the news Christmas Eve and told the family at Christmas Breakfast. The were all shocked and happy for me, which is still how I am feeling lol!!

Next Lesson booked in for the Sun 12th Jan as I'm enjoying some Algarvian sunshine!

I'm currently looking for shares in a swamp boat - I've not managed to fly since mid sept and have had 3 lessons cancelled over the Christmas period due to weather, even though Skytrek are flying a couple of planes out of Lydd.

I've booked something like 7 potential days in over January with the aim of having the skills test completed before Feb. Lets see how that goes!