It's as much an emotional experience as a practical one. And an experience which gives a previously unseen insight in to oneself.

Well it is possibly the only thing, other than passing my professional exams and tiling our bathroom, that I have wanted to be able to do really well

Following your journey takes me back. An enlightening experience all round. Exhilarating, exciting, frustrating, fulfilling, mind boggling, maddening, unbelievable...

And the cause of insomnia...

(I succeeded with both the other projects. One caused me to swear a lot though

Instructor was running late but that was no problem, I am never in a hurry on a flying day.
Eventually I was sent to pre-flight. There were LOTS of a/c manoeuvring on the small apron but I did the inelegant clamber to dip the tanks, found a lose fastener (is it just me who loves the chance to use the screwdriver?), got through a few other checks then my Instructor appeared and apologised but said we had to swap a/c. So I put her back to bed, control lock, pitot cover, chock etc. Moved to a new-to-me a/c and started again!
So I jump up to the tanks again (who needs a gym membership?!) and now I have to tackle the new 4-point harness (it's an aerobat), and get used to a new, slightly odd panel (a mix of steam and e-instruments). I struggled to see the tacho because it was deep-set and I was full-forward!

Anyway, after realising the rudder pedals were easier and more responsive than I am used to I settled in, until the sun blinded me on crosswind. I couldn't see the e-AI properly but was reminded that the actual horizon was perfectly visible

I found it easier to stay balanced in the turns, got a bit low on Base and too flat on Final so not brilliant.
Raised the nose a little too soon on round 2. Took the sage advice from RHS next time and it was almost OK but I'd got heavy-handed on the throttle so power adjustments on Final were not subtle enough. Grrrr. This is frustrating. I can do this, why not today?!

Cut to the last circuit, ahhh, finally a decent landing, held off for long enough to enjoy it

I admit to being unusually quiet on the taxi back in as I reflected on 2 steps forward and 1 back. I must have looked a bit crestfallen because my Instructor told me not to be downhearted, my general flying was good and the landing was coming on fine.

It certainly is a rollercoaster experience

I decided to re-set before I drove home so I popped into the clubhouse for a brew and a natter and that did me good - laughter's the best medicine and sharing other folks' flying experiences is always interesting.

At it again next week

By ericgreveson -  Sat Jan 22, 2022 10:42 am
Like 1
Sat Jan 22, 2022 10:42 am #1894911
Sounds like fun despite the frustration... I know what you mean, progress isn't a straight line! 2 steps forward and 1 back is still overall forward, so that's good.
Where I am, the clubhouse is currently devoid of hanging-out-space (chairs etc removed) due to Covid restrictions... hopefully this will be back to normal soon, as it's pretty empty in there most of the time right now!
T6Harvard liked this

T6Harvard wrote:I am never in a hurry on a flying day.

A good practice to carry with you also post-PPL.

T6Harvard, townleyc liked this
Autocorrect is so frustrating. It's always making me say things I didn't Nintendo.

Paul_Sengupta wrote:I'm always in a hurry on a flying day!

Nah, I bet you don't hurry the planning and the checks.

T6Harvard wrote:Nah, I bet you don't hurry the planning and the checks.

You could say that it's because I do all the checks and stuff at home first that I'm always late and thus always in a rush...
T6Harvard liked this

FLYER Club Member
Like 2
Mon Jan 24, 2022 10:46 pm #1895446
So last week I sulked when I only got one decent landing in. This week I'm sulking because fog prevented play altogether.
TAF was reasonably promising last night for decent cloud base at lunchtime but the drive down was cloud on the deck.

Arrived to hear someone doing power checks...
hurried over to view a new-to-me Wilga. Eye-catching, but not necessarily in a good way

My untrained eye was doubtful of the cloudbase but she took off. Then she just disappeared, well before crosswind turn!

My Instructor was looking wistfully out of the window but with Temp = Dew Point and no wind at all it was never going to clear.

So I inflicted myself on the gents in the clubhouse and we chewed the cud for a while before my foggy drive home. Ah well, time to finish revision and prep for Aircraft General Knowledge exam

and a lesson next week.

Tbh, I got myself so wound up last week that the break may do me good. But I wanted to fly *wah* 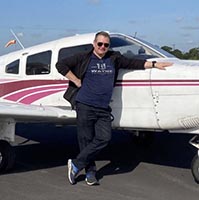 FLYER Club Member
Like 1
Mon Jan 24, 2022 11:00 pm #1895447
I sooooo know the feeling with the current cloud base. Trying to get another flight with my instructor post PPL just to relax, and then a few solos before I can take passengers and its all low cloud, low cloud and low cloud. Managed to grab some 'fun' simulator time and I'm already eyeing up IR(R), but I feel your frustration, and I have about 2 weeks more before I HAVE to go up with an instructor as we have a 28day rule for self hire.
T6Harvard liked this
Now blogging about my attempts to learn to fly - Find my YouTube Channel [url=https://www.youtube.com/channel/UC6ZMhTuxduaYZ8jjIYfwaKA]Whiskey Alpha Pilot on YouTube[/url]

Have you planned where you'll take your first pax??

FLYER Club Member
Like 2
Tue Jan 25, 2022 7:04 am #1895475
I hate that realisation as the week progresses towards the lesson that Windy and others are not in your favour. I’ve had several times where fortunately, it’s cleared enough to get up but so annoying when it’s not. I always comfort myself with the old cliché ‘it’s better to be on the ground…’ and pop the memory in the bank to spur me on to do IR training once qualified.
T6Harvard, ericgreveson liked this
Student PPL, started Aug 21, C-152, EGBJ

FLYER Club Member
Like
Tue Jan 25, 2022 11:31 am #1895534
TAF looked poor by Monday morning tbh, but Windy gave a glimmer of hope... Usually I'd have rung to check and see if cancelled before trekking over but I was due to meet up with a woman who was thinking of returning to flying. Suffice it to say that it wasn't a wasted day.

And I got to see the Wilga