Usually though if weather permits I cross at Porthcawl and have never (until Friday) come close to infringing there.

The track almost tells the story on its own - the curved 'homing'to my visual waypoint as I failed to allow sufficient for the drift, the points at which I tried to sort it out.

I can see two main causes - stronger than forecast westerly making my heading 'wrong' and a flaky aerial meaning I was spending a lot of time trying to establish two way comms for the water crossing and troubleshooting the issue, rather than monitoring track and registering the fact that while the nose was indeed pointing towards and slightly west of Linton I was nonetheless drifting further and further east.

GPS was present but shoved temporarily behind camping gear out of the way while I was faffing swapping aerials and headsets. I checked the track only later after landing and was past the airspace before it was on my lap again.

Fortunately while Cardiff couldn't hear me, I could hear them perfectly so was able to adjust somewhat, although it was so close, that if they'd wanted to call it an infrigement they'd frankly have been perfectly justified!

Happily, they were more concerned with making sure I stayed in touch until I was safe and dry the other side and perserverd with making sense of my poor transmission strength until I coasted in. 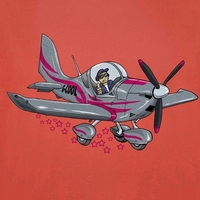 Lee Savell wrote:As a new trainee pilot, what were the potential outcomes if you had infringed on their airspace?

I don't know what their traffic load is like in that area so unsure of the impact on them. Which is sort of the point, one supposes!

I'm guessing it's there so they can climb and descend incoming heavier commercial traffic (it's broadly speaking covering an area in line with the runway) but that's only a guess and I don't know what they had on their plates that particular day. I must admit I wasn't really monitoring the position of the big stuff they were talking to.

If there was anything else in the area ATC would have had to give it instructions to move away from me as they would assume me a muppet who couldn't be relied upon to go where I said I was going either horizontally or vertically! Depending on traffic that could have caused quite a bit of disruption.

For my part, assuming I'd caused only a nusiance not a serious incident I'd have probably been asked to phone them on landing and explain mysel, asked some questions about what wentwrong, and possibly asked to sit the training/test around avoiding infringements that's been recently rolled out.
http://infringements.caa.co.uk
"Let's go flying"

By Charles Hunt -  Thu Jul 02, 2015 8:16 am
Like
Thu Jul 02, 2015 8:16 am #1386502
....many a true word. As always thanks for your openness and honestly Leia. Something similar happened to me on an early post qualification flight. F'boro asked me to turn northwards near Bagshot Mast earlier than I had planned. Wind blew me eastward, they called me up with 'Turn left to avoid Heathrow' when I had drifted into White Waltham's overhead at 1,000' or thereabouts.

I went out and bought an Aware unit.
Suiting the action to the words

My GPS and radio nav instruments weren't working at the time so I picked up the radio and requested vectors for the visual approach instead.

I always check the aerials on every pre-flight now and make a note if the comms doesn't seem right.
I also carry a backup radio (with built-in VOR and ILS) with me in case my on-board electrics were to fail.

Flying out from a manned aerodrome also has the advantage of being able to do an implicit radio check.

As a general rule of thumb I plan for a 5nm buffer away from a boundary if it's looking like I'm not going to get a clearance.

As a new trainee pilot, what were the potential outcomes if you had infringed on their airspace?

If you were already talking+squawking, you are either asked to leave the airspace or offered a clearance through it depending on the traffic situation. Usually there will be no further follow up.

If you're not talking then ultimately it depends how much other traffic was affected. As you're unidentified they have to assume you're IFR and apply separation with their IFR traffic if you're not on frequency. Once you're on frequency or leave the airspace then operations can continue.

The CAA will prosecute in the most extreme cases, for e.g. you didn't pick up the radio and switched your transponder off, flew a missed approach, and then orbited overhead Cardiff at 500ft for 'fun' causing an airprox with another plane while leaving the rest of GA and other airliners sitting in various holds for over 15 minutes....

The current rate is less than 5 per 700 infringement cases reported each year.

There's also the in-between case, for e.g. you got rather lost, didn't understand the rules of the air and there was some disruption to traffic. Then you may be asked to sit a test and/or undergo further flight training.

James Chan wrote:Flying out from a manned aerodrome also has the advantage of being able to do an implicit radio check.

Yes, one of the disadvantages of the strip is that the first hint of comms problems is usually when I change to Cardiff!
"Let's go flying"

Jim and Pat Dalton wrote:When departing from Bourn on very quiet days ie early morning, as soon as I got to about 1000ft, I used to call Cambridge and explain that I was departing bourn and could they give me a radio check please? They always did, can you not immediately do the same with Cardiff or Swansea?

That's a good idea. I'd sort of been doing the opposite and waiting until I was closer to call on the basiss if it was meh I'd have that much more of a chance of being heard! But yes, when all's well you can easily reach both Swansea and Cardiff from overhead Old Park.
"Let's go flying"

FWIW I crossed over the Bristol Channel from Cardiff the other day too and they were more than happy to give me extra height on the way out (climb as fast as I could or wanted, to 3000') and on the way back coasting in (4000' at Minehead and then start descent).

Could you have phoned beforehand? Were all comms completely SNAFU?

Just wanted to see the full picture that's all.

That little bit of water does look quite large innit?

Not sure where the fixing of flaky aerials, swapping aerials/headsets and stuffing GPSs amongst camping gear comes in the good old fashioned mantra of aviate, navigate, communicate.
Frank Voeten
Use email please rather than PMs

George wrote:Hi Leia - for the sake of clarity, I can't quite work out from your post if you were in communication with Cardiff or not? You could hear them, but not vice versa?

They could hear me intermittently.

I have two aerials on the little X'Air both of which vibrate like mad at every electrical contact point under the mighty power of the (also little) 582 so seem to need new BNC connectors putting on at least one or the other every few months - usually at least one is working! Rubber duck lives in the back pocket. it's less than ideal but usually at least combo works perfectly...

Could you have phoned beforehand?

That's probably the solution for next time, phone in advance, check the likelihood of being allowed higher up closer in and at least brief them that I'd be there and TRYING to communicate!

Meantime, back out with the crimps and soldering iron to the dratted aerials! At least I'm getting quicker at replacing them...

That little bit of water does look quite large innit?

From certain spots at 43mph groundspeed it does, yeah

Flyin'Dutch' wrote:Not sure where the fixing of flaky aerials, swapping aerials/headsets and stuffing GPSs amongst camping gear comes in the good old fashioned mantra of aviate, navigate, communicate.

Must get around to buying a smaller form tablet that I can clamp to me leg!
"Let's go flying"

leiafee wrote:Must get around to buying a smaller form tablet that I can clamp to me leg!

Is there somewhere up near the panel you can mount one? Did you see my thread about the 5.5" phone I bought? Someone else bought a 4.7" one.