At least it isn’t in the Midlands or the South/South East where people actually fly. 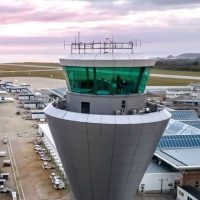 At least it isn’t in the Midlands or the South/South East where people actually fly.

Yes, it was tongue in cheek and I do feel for you guys who cannot fly for a few days. I think my point is that of all the places in England to hold the event that the impact on GA is probably less impactual in Cornwall than anywhere else. My friends and relatives in the area (where I was born/grew up) have mostly upped sticks or gone to B&Q and are having DIY time. As I said before, 2 years ago when in Biarritz the town was essentially closed off and tourism was a nightmare. I hope that the UK Government are less strict and that tourism can continue. At least they avoided the kids half term/summer holidays.

Might want to have a tent with you though - getting out again might be a little delayed.

1. The Americans brought so many aircraft that Birmingham airport didn’t have enough space to park them - let alone any of the other nation’s aircraft.
2. At the planning meetings, the Secret Service initially “demanded” that we provide a “clear zone” 1 mile either side of the A45 Coventry Road for the entire 11 miles between the airport and the City Centre. They really expected that the UK Government and West Mids Police would evacuate about 200,000 people from a 22 sq mile area! (For approx 4 hours whilst POTUS drove from airport to the City).
They eventually agreed to us:
A) Clearing all vehicles from a 1/2 mile zone either side of the A45 for 11 miles into Birmingham.
B) creating a curfew which restricted all residents within that zone to remain in their homes for 30 minutes either side of the time that POTUS would be travelling up the A45
C) Having police operate a series of parallel “rolling road block” on all side streets for 1/2 mile either side of the A45 to ensure that residents stayed indoors and that no vehicles moved.

3. On one morning, they closed the Aston Expressway and the M6 for about 4 hours whilst they got all the motorcades out of the city and on to the M6 for a drive up to Weston Country Park. It was planned to take 20 minutes, but the Heads of State all wanted to be the last to leave their hotels and they started refusing to leave their hotels because they refused to sit in a queue waiting for some “lesser” motorcade to get into place in the column on the M6. This all took so long, that both the Police and American military helicopters started to run out of fuel. There a lot of very excited Police and Security / Secret Service as it became apparent that they might have all the G8 Heads of State sitting in cars, stationary on the M6 without air cover. Twas indeed an exciting time!
T6Harvard liked this

Lefty wrote:B) creating a curfew which restricted all residents within that zone to remain in their homes for 30 minutes either side of the time that POTUS would be travelling up the A45

Did this actually happen?
Its generally best to make a hole in the sky.......not the ground...

Lefty wrote:B) creating a curfew which restricted all residents within that zone to remain in their homes for 30 minutes either side of the time that POTUS would be travelling up the A45

Did this actually happen?

In short, Yes - after a fashion.
The authorities published the “restriction of movement”. And in the days running up to the event the police knocked on doors and stuck up posters to remind residents not to be hanging about or congregating in the streets between the published times. On the day however, the majority of people were out at work and most of the rest just weren’t interested. A small number of people did gather at the police barriers to watch the cavalcade speed past at 70 + mph but the police didn’t consider them a risk and didn’t do anything. There were far more people in the city centre where the VIP’s got out of their cars to walk into their hotels.

CloudHound wrote:And a Beauty & Hair Salon on the route had its name sign covered up to spare POTUS any blushes.

Onen hag oll - is that the stuff that turns a woman into Medusa?

If Mildenhall is the destination I would have expected some sort of airspace for the transit to NQY.