johnm wrote:A number of things come out of this and all of them highlight the value of the work done by Pilot Aware.

The EC Structure is a total dogs breakfast Mode S ADSB TCAS TAS FLARM PAW not to mention the SDA and SIL variations on a theme.

Pilot Aware have had a really good go at trying create a framework that makes this lot a bit more coherent and have developed some useful tools to assess how good the resulting picture might be.

The result may be imperfect but that is unsurprising and largely inconsequential as long as the limitations are reasonably well understood and they seem positively keen to address limitations when they are highlighted.

I may not be a customer (yet) but I’m impressed by their work and unimpressed by carping criticism.

I agree - as a receiver, then PAW Rosetta and PAW Classic are excellent affordable bits of kit. But then again, the Stratux is cheaper still and has uses a very similar box to the Rosetta. There is also SofTRF, which also receives a multitude of the diverse transmission formats that you mention.

But as a transmitter it absolutely sucks. It has introduced yet another protocol, as you have identified above, to an already significantly diverse set of transmission protocols. Now the P3i (or “Pilot’s 3rd Eye”) protocol is kind of fine if your aircraft is emitting other things like ADS-B, but if you don’t then only PAW equipped aircraft are likely to detect you. It would also appears that PAW are planning to expand the use of P3i by something called “Rosetta DX”, which is about 30-40g in weight and is designed for small drones and paragliders. These are unlikely to be transmitting anything else, due to weight and size constraints, they only have room for one device. So yet again, we see more devices from PAW that further dilute and diversify the air user onto another protocol and frequency that few others outside of the UK use, and even in the UK does not make up the majority of EC reception capability.

The whole idea of CAP1391 was to provide a common-standard ADS-B format that minor manufacturers could manufacture devices far easier and cheaper than normal fully certified ADS-B devices. There are so far 8x Declaration of Capability and Conformance (DoCCs) from 2 manufacturers for individual CAP1391 products - all are from f.u.n.k.e. and uAvionix so far. Wouldn’t it be good if FLARM, PAW and others made similar products that all of us can detect, rather than persisting with their own proprietary transmission formats? But then again, by being proprietary that “bonds in” certain users if their community uses that format, which I am sure is part of their individual business models. So we end up with a conflict of interest between the various manufacturers - which is why I believe the Regulator needs to make that decision, rather than the “Wild West” chaos of choice that we currently have.

To be frank, if that Regulator decided that the common standard was FLARM or P3i, then I really don’t care. But it would seem that the Regulator has already made its choice with ADS-B for now, but it is being really weak about enforcing that message that they pushed out in an AIC:

In August 2017 the Civil Aviation Authority confirmed that ADS-B using 1090 MHz is its preferred national system to improve electronic conspicuity for general aviation. Ideally this will be achieved through transponders, although other devices can be integrated and interoperable with the CAA’s final strategic solution. Two years on, some significant developments and ongoing trials mean that it is timely to provide an update on the options currently available for enabling ADS-B out throughout the General Aviation fleet, via this AIC.

So really, I look towards the CAA to get this sorted out one way or another... just hoping it will all be OK is not really an option!
Flyin'Dutch', East-Bound, WhoWhenWhy? liked this

leemoore1966 wrote:fascinating
An airprox occurs between an ADSB out aircraft, and a CAP1391 aircraft, identified as a danger by an AGO using PilotAware ATOM station, and commended (rightly I think we all agree)
And you want to somehow pin the blame on PAW, what kind of dystopian view on reality is that ?

Please replay the events of the day in your head, and remove our technology from the equation- and let us know how you see that panning out ?

OK, the Phenom gets close enough to the RV9A to trigger the warning from their SkyDemon (or other) to warn the Pilot of the RV9A that the ADS-B Out Phenom is approaching. Mode S on the RV-9A generates a TA on the Phenom’s TCAS (remember it has no ADS-B In at this time), that alerts the Pilots to an imminent conflict. The Pilots in the Phenom see the RV-9A at a range of about 2nm (about the range that the average human sees a light aircraft) and avoid. None of those scenarios require an ATOM ground station, and are likely outcomes...

A4 Pacific liked this

An airprox occurs between an ADSB out aircraft, and a CAP1391 aircraft, identified as a danger by an AGO using PilotAware ATOM station, and commended (rightly I think we all agree)
And you want to somehow pin the blame on PAW, what kind of dystopian view on reality is that ?

I think we can all agree that any EC equipment fitted to the RV9 was ineffective during this airprox? Yes?

The ATOM ground station provided advanced warning of a possible conflict to the AGO who responded in a highly commendable way. But even then the airprox board says this:

a CAA advisor was concerned that an enthusiastic, but unqualified, AGO could potentially pass inaccurate information that then distracted a pilot and that the lines between a controller using a calibrated radar and an enthusiast using a web- based program could become blurred; leading to potential confusion for pilots as to the type of service being provided.

It’s also clear that the Phenom crew had acquired the RV on a well presented and integrated TCAS, and was visually able to avoid it.

Even if the Phenom had been in conflict with a non EC equipped aircraft at a non ATOM equipped airfield, It’s not really clear the outcome would have been much different?

It’s only fair you should add that whilst that may be your conclusion, it’s not one the airprox board reached.

As an aside, have you any idea why there appears to have been a 3 week delay before any airprox report was submitted?
patowalker, gaznav liked this

Straight Level wrote:The new draft update for CS-STAN out for consultation includes some major changes to allow permanent install of non-certified electronic conspicuity devices and external antennas for certified aircraft. Along with other relaxations to the rules in general, making it much easier and less expensive to fit all types of EC that use aviation band and non-aviation band frequencies.

I have the correct size drill at the ready to 'whack a few holes' in my spam can and fit external antennas.

Your drill may have to wait a bit. The decision is not expected for another year, and even then the UK may not adopt it. (On the other hand, the new nimble sandbox-and-goal oriented CAA may do something similar, earlier!)
Straight Level liked this
GrahamB

A4 Pacific wrote:As an aside, have you any idea why there appears to have been a 3 week delay before any airprox report was submitted?

Hi
I have no idea why there was a 3 week delay, I do not know either of the parties involved I'm afraid.
One other point to note, the references to 'web based program' were related to tools such as FlightRadar24, Planefinder etc - I understand there is an inherent delay built into these tools.
The ATOM station is live timestamped data

One other point to note, the references to 'web based program' were related to tools such as FlightRadar24, Planefinder etc - I understand there is an inherent delay built into these tools.
The ATOM station is live timestamped data

That’s a very fair comment Lee, and a point clearly made later in the airprox report which is why I did not clarify it.
Last edited by A4 Pacific on Sat May 01, 2021 11:03 am, edited 2 times in total.
gaznav liked this

Rob P
gaznav liked this
"We sleep soundly in our beds because rough men stand ready
in the night to visit violence on those who would do us harm."
- George Orwell-

The other pilot made no mention of an Airprox, but simply wanted to ask if they had been aware of Turweston’s location and to
highlight that it can often be quite a busy circuit.

I think this has more to do with the loss of an ATZ than an airprox. And it wasn't even lost, it was voluntarily surrendered.
A4 Pacific, gaznav liked this

I think we can all agree that any EC equipment fitted to the RV9 was ineffective during this airprox? Yes?

No, I don't agree. The RV9 had an effective Mode S transponder, which:

.........the Phenom crew had acquired the RV on a well presented and integrated TCAS, and was visually able to avoid it.

A4 Pacific, gaznav liked this

A4 Pacific wrote:It’s also clear that the Phenom crew had acquired the RV on a well presented and integrated TCAS, and was visually able to avoid it.

If that's true, I'm puzzled why the Phenom crew a) remained at the same altitude and b) turned towards the RV9 rather than away They were past the Turweston non-ATZ by that time and could easily have done so (looking at the radar-derived plots on page 1 of the report). I'm not conviced they were aware of it all.
Alan

@A4 Pacific You'll probably say I'm being picky, but:

Not at all. You’ve identified precisely what I meant.

By all means be puzzled or unconvinced, but this is what the airprox board found:

Finally, in determining the risk, the Board discussed the separation between the aircraft and the action taken by the pilots. Although the RV9 pilot had seen the Phenom late, the Phenom pilot had been visual for some time and so members quickly agreed that there had been no risk of collision, but assessed that safety had been degraded; Risk Category C.

The Phenom crew were (admittedly inadvisably) in a situation where they were constrained both laterally and vertically.

As has been identified, their predicament would have been rather less likely had Turweston retained it’s ATZ.
gaznav liked this

I have drawn a normal 2nm ATZ centred on the middle of the 09/27 runway here. Look how the circuit pattern is barely protected by the circle. So even if it did have an ATZ, I am not convinced that there wouldn’t be similar events if someone is flying a slightly wide circuit to the one published. This is not a dig at Turweston by the way; which is exceptionally well run and a lovely airfield to fly from. But a dig at our airspace design and policy: 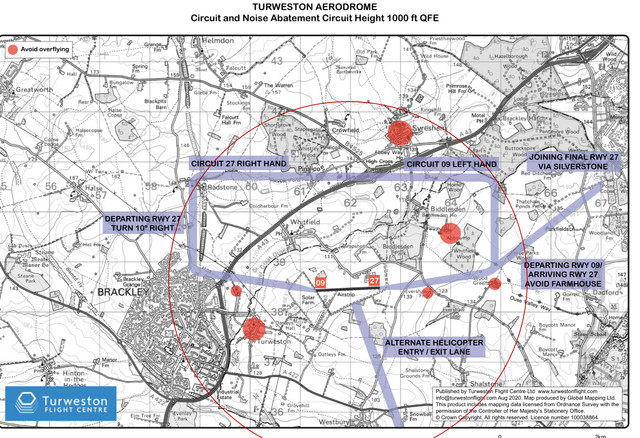 Now, if I had my way, the ATZ would be oblong shaped to provide that “protection” through notification of the circuit traffic’s tracks. Here is what an ATZ at Turweston should look like - it is also more efficient and hands back unused parts of a circular ATZ for others to use outside of any notified ATZ. 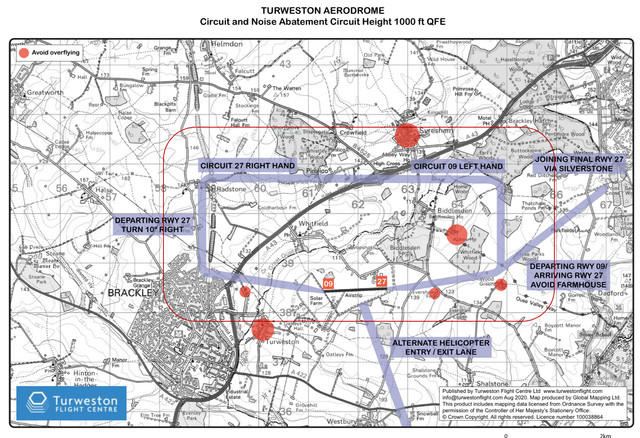 I am sure there are better ideas too - certainly better than the simple old 2nm and 2.5nm rings that have been around since Pontius was a Pilot (Pilate).