No convents, hospitals, schools or puppy farms were harmed in this week's instalment

Peter Gristwood wrote:Getting to be a busy week for AAIB.

I was talking to an AAIB employee a couple of weeks ago. They were fully expecting a busy start after lockdown pilot inactivity. With a number of aircraft down in only a few weeks, it looks like their expectations are being realised.

G
Flyin'Dutch' liked this
I am Spartacus, and so is my co-pilot.

Nope, the aircraft crashed on landing...end of story. Look at the photo!

I’m really interested both in the technology and what they will learn from this.

@gaznav it looks to me more like a forced landing where the damage has come from passing through the hedge at lowish speed. Semantics I know, but that is what I’d describe as the consequences of what you’re left with on a forced landing rather than the aircraft “crashing” on landing.
I work for the company, but hey, don't let that fool you. I'm really an OK guy...

I have great sympathy for Zero and their development team

caverill liked this
Pete S as was

Crash landing is a landing where the aircraft receives significant structural damage. Not all emergency landings are classified as crash landings - if the aircraft has remained intact (or has received minor damage) using the term would be inappropriate.

There are some ICAO references.

the crew were able to safeguard the battery and safely release hydrogen from the onboard tanks, following ZeroAvia safety protocol;

If the fuel cells weren’t compromised then why vent the fuel into a post-crash, potentially explosive atmosphere ? That would appear to be a bit like someone saying that there were no holes in an AVGAS fuel tank, but we’ll drain all of the fuel out anyway. It would read much better to me if they’d said that they’d left it to the formal AAIB investigators before disturbing the accident scene and altering crucial accident investigation evidence.

gaznav liked this
You are still dangerous! You can be my wingman anytime.

gaznav wrote:What a load of hoop from ZeroAvia - “Off Airport Landing” and “The aircraft landed normally on its wheels in a flat grass field and almost came to a stop, but was damaged as it caught the left main gear and wing in the uneven terrain at the end of the field at low speed.”

Nope, the aircraft crashed on landing...end of story. Look at the photo!

I think I would prefer to look at the positives. This is a prototype for a technology that may eventually allow us to keep enjoying our hobby after the dead dinosaur lobby have succeeded in ending our use of liquified T-Rex to launch ourselves skywards.

A crash or forced landing of an aircraft fuelled by hydrogen is sadly inevitable. Whilst this was almost certainly not part of the test programme, it has no doubt given valuable real life experience of the aftermath. Looking at the pictures, a similar result in an AVGAS fuelled aircraft could have likely resulted in a post crash fire and almost certainly would have led to a fuel leak and resultant soil contamination. The press release is carefully worded and only the AAIB report will publish the facts, but it appears in this incident the hydrogen fuel was harmlessly vented by the crew following the incident. Significantly reducing the potential for further environmental damage.

Whether you like it or loath it, the future demise of traditional fuels is inevitable so we should embrace it and ensure the replacement is applicable to our aircraft too. Batteries are currently not efficient or light enough to be truly viable as a 100LL replacement (the current pipistrel is only really useful for 1 hour endurance, and the lack of charging infrastructure and time to recharge make it great for its intended use of a-a training flights but less useful for most post licence GA flying), hydrogen fuel cells offer a very similar experience to traditional fuels (either a direct refuel from a pump or a quick swap of pre-filled hydrogen cartridges) and appear to be the most appropriate future fuel source for GA.
Josh, Genghis the Engineer, gaznav and 3 others liked this

I completely agree. However, the Bye Aerospace eFlyer 2 has now got 3 hours flight time plus 30 mins reserves and a 15kts higher cruise speed than the Pipistrel. It also has a Rolls-Royce (late Siemens) electric motor. Plus, how cool does it look too? 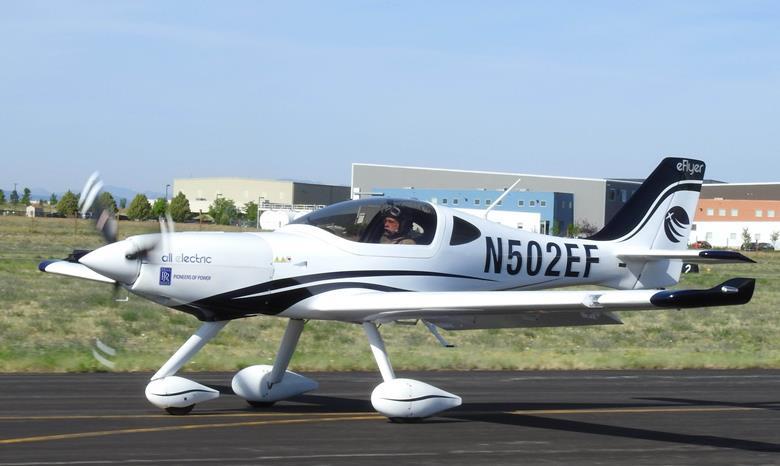 Three production-conforming aircraft will take part in the flight-test campaign, with US Part 23 certification scheduled for mid-2021. The eFlyer 2 is powered by a 120hp (90kW) Rolls-Royce RRP70D electric motor, delivering speeds of over 135kt (250km/h) and an endurance of over 3h.