Except it says “App Not Available This app is currently not available in your country or region.”

I tried to have a look at this the other day, to see what it offered.

Should be available from May 17th according to the Safesky forum. Yes they have one already!
Currently only available in France and Belgium.
gaznav liked this

johnm wrote:I'd be interested to see the air to air results in due course with some suitable qualification on how they were obtained and analysed.

Air 2 Air would be really good and what we could do with, is a tool to capture the data from SE2 for upload to aircrews track replay feature. However again the devil is in the detail and some units could have different receivers & antennas which will skew the results. Below is a photo of 4x EC devices which only covers internal antenna configuration. 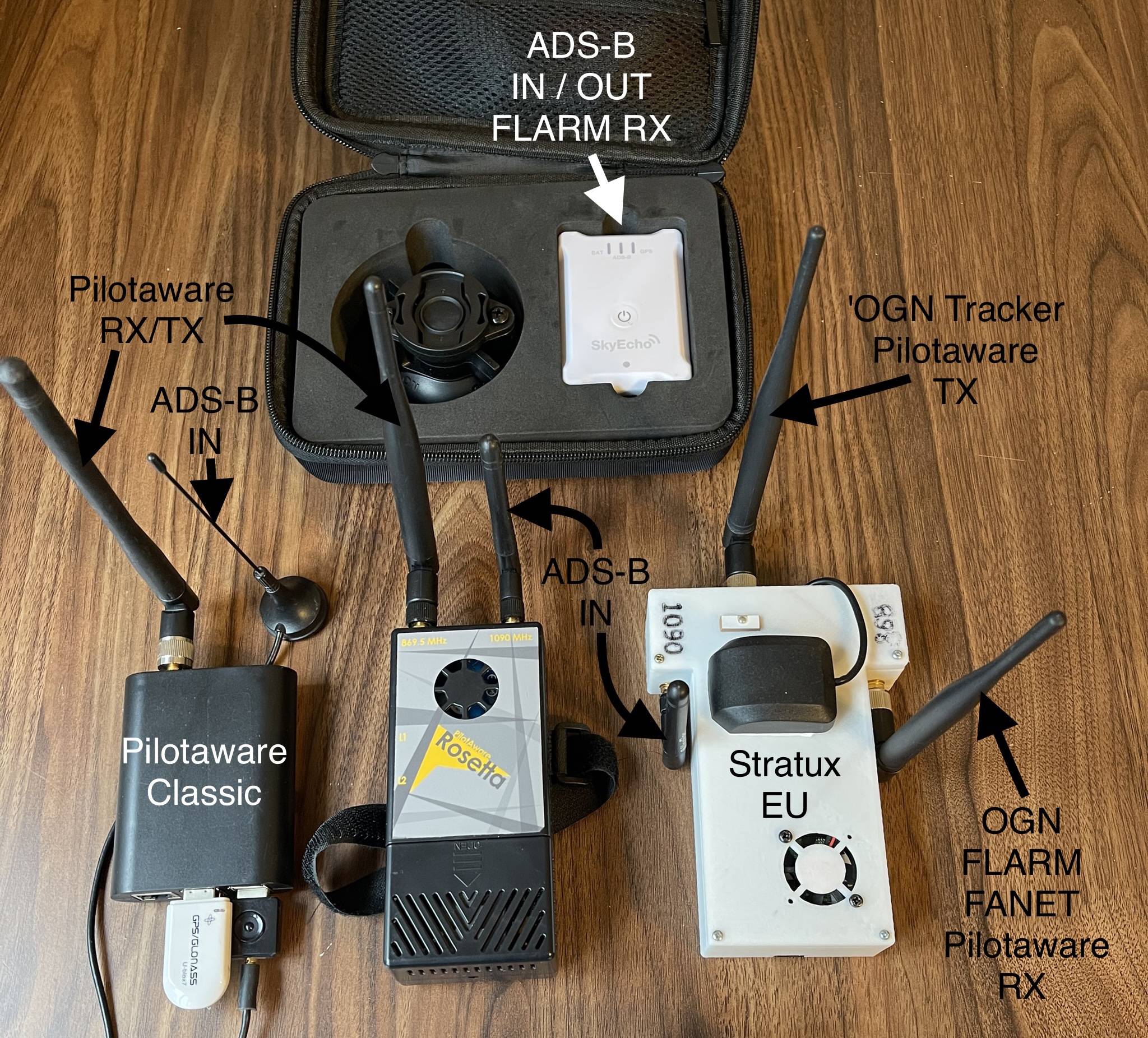 PS. Did anyone notice it was only after Flyers real life testing that external antennas was pushed as a must, until then it seems like it was a good to have and not a must have.
gaznav liked this
Vince

By MattL -  Mon May 03, 2021 6:25 pm
Like
Mon May 03, 2021 6:25 pm #1844689
That safe sky app website seems to say they are just sending position information over the cellphone network and receiving a ‘flight radar picture’ back over the same. I thought in flight use of cellular was technically illegal in U.K.?
Posts are personal views only.

There is a real danger of people trying to do arithmetic correct to 2 decimal places on data that is plus or minus 25%, as the old saying goes.....we're not looking for accurate consistent data, we're looking for real life experience....
John Milner Fairly tolerant PPL/IR flying a TB 20 from Gloucestershire

MattL wrote:That safe sky app website seems to say they are just sending position information over the cellphone network and receiving a ‘flight radar picture’ back over the same. I thought in flight use of cellular was technically illegal in U.K.?

I believe so Matt, in that OFCOM licence the use of the GSM bands for “terrestrial use only”.

Then there is the Wireless Telegraphy Act bits that also need considering. Mobile telephones frequency hop and vary their transmit power in conjunction with the ground station (people call them towers or masts). You can't control the frequency or the power and you have no idea what they are either. This renders it hard to carry out a conventional EMC test on an aircraft, and there are important aircraft systems that operate on or around some of those frequencies, and their harmonics. This is an issue for EASA and they say that you can't use mobile phones in aircraft unless you prove it is safe. I have no idea what the Part-21 and non Part-21 regs now state, but they were supposed to be a direct read across. Finally, the cells that the masts/towers serve are carefully designed and is based on the careful reuse of the same frequencies at multiple cell sites. It relies upon attenuation, directional antennas and natural screening to prevent mutual interference between sites. Many of the phone mast/tower antennae are canted 1-2 degrees downwards deliberately to put the main reception lobe (the largest) out across the ground and that is all part of that calculation. A phone in the air may potentially interfere with multiple sites on the same frequency. However, 3G/4G/5G are less likely to cause issues as they use spread spectrum WCDMA (Wideband Code Division Multiple Access) and this limits to some extent the chance of interference.

So, if you can get the clearance to operate and vary the licence of use from OFCOM, I guess it would fine?
kanga liked this

rf3flyer wrote:ADSB lite? What the heck is that? A SE2 limitation?
I don't zealously follow EC debates here but I've never come across that term before.

SE2 emits and receives ADSB, it's described in CAP1391. Vector, the Pilotaware tool that helps you determine if your setup is effective, will let you look at received radiation patterns for ADSB or CAP1391, ie Full fat ADSB or SE2 (the only CAP1391 game in town)
You can discriminate between the ADSB signals you receive, DF17 and DF18. DF17 is Full Fat, DF 18 is lite (cannot be interrogated). I didn't know the definition, I looked it up. Look it up

By PaulSS -  Mon May 03, 2021 11:15 pm
Like 2
Mon May 03, 2021 11:15 pm #1844749
@Cub If you truly believe that identification of personal information is detrimental to safety, why are you not canvassing the CAA to remove the same from G-INFO? Surely you can contact your old cronies at the Ministry and increase safety by doing so. It is only by combining the identification of an aircraft (through the likes of FR24) and G-INFO, that the curtain twitchers are able to glean the data; so why not go to the hub of the problem instead of a really quite pathetic list of point-scoring attempts, dressed up as 'questions'?

PS: you do realise that ADSB data from your most recent company is also subject to the same scrutiny by the same curtain twitchers, don't you.......or does ADSB identification of the aircraft (and subsequent G-INFO search) make it more safe?
exfirepro, Aerials liked this

By AeroDyn -  Mon May 03, 2021 11:43 pm
Like 2
Mon May 03, 2021 11:43 pm #1844757
So @Cub @PaulSS If Pilotaware encrypt their data (which as a private company they can, unlike the ADSB transmissions), they would be the preferred, safest, most accurate GO TO provider of EC systems and UK controlled repository of UK overflights? AS WELL AS best AND cheapest EC provider?
Awesome
Thankyou for your support
HansGruber, exfirepro liked this

By HansGruber -  Tue May 04, 2021 12:17 am
Like
Tue May 04, 2021 12:17 am #1844759
@gaznav Listen, I know you're probably doing the best you can. You may even think what you're doing is 'In everyone's best interest'
But it's not.
PAw is better than SE2, on any day, in any environment, with or without ATOM GRID
{(which is a privately funded infrastructure that ANY OTHER COUNTRY IN THE WORLD would be lauding as an example of local genius) which is a bit racist, but, moving on}
There is SO MUCH performance data that demonstrates how much better PAw is (than SE2), it explains why SE2 don't have similar tools.
So, will uAvionix persuade the UK gov't to fund them instead of a better system? PAw, a more flexible system, one that gives them more time to implement EC without expensive false deadlines?
That would be embarrassing wouldn't it? Boris Johnson and Grant Shapps rejecting a superior cheaper UK system in favour of an inferior more expensive US system.
Is that what BREXIT was for? 'Sod you, my mate sez'?

Anyway, the big problem with PilotAware is P3i. Very few other manufacturer’s devices receive it, and it is in 3rd place behind FLARM and ADS-B in the numbers of aircraft transmitting it in the UK alone. When you look at it globally, then P3i emissions are minuscule and we have to have a system that is international and not mainly UK focused (ADS-B is best for this, followed by FLARM, although that uses different frequencies in different countries). So as a receiver, the PilotAware product is pretty good, but as a transmitter it sucks - and when it comes to form factor as carry-on kit it is no better than the awful Stratux (just look at them!). [photo credit @VinceGod ]

Now if every ICAO nation agreed that P3i was the future protocol to be used, and that every air user and EC manufacturer was going to field it, then great. But somehow I think that is unlikely when literally billions of £s/$s/€s (or any other currency) has been spent globally updating aircraft, air traffic ground infrastructure and satellites to use ADS-B. When you consider that I think that scenario of world-wide adoption of P3i is very unlikely, don’t you?

@AeroDyn and @HansGruber, your writing style seems familiar. Remind me, have we met before?

Maybe @neilmurg might be along shortly to join in?
gaznav liked this
Cub

Contrary to what I was being told, I hadn’t “picked a side”, seeing how people are acting, I’m glad I disassociated myself from them.

Every time I see posts like these, it confirms to me I made the right decision.

No amount of money is worth being associated with posts like these.
Cub, gaznav, Flyin'Dutch' liked this

johnm wrote:Every time one of these threads escapes it reminds me forcefully of the old medieval debate about how many angels can dance on the head of a pin...most of the discussion is as useful

I bet you wish you'd not started this thread now.
Flyin'Dutch' liked this
GrahamB