Routing via IFR and VFR waypoints.

I wonder how many pilots VFROCAS use VOR's for navigation?

Me sometimes, although not solely.

Why wouldn't you? VORs were never reserved for IFR flight.
AlanM, mick w liked this
If we don't take part in protecting GA access to infrastructure, the smaller aerodromes will be built over, the larger aerodromes will have exorbitant handling fees and awkward procedures, and airspace will be over-classified to Class A everywhere.

AlanM wrote:More annoyingly is when pilots file lat/long - that increases the guessing game!

Does Sky Demon put this in a flightplan if you make a turning point in the middle of nowhere?

Yes. We often get FPLs filed that have to be ‘repaired’ (internally for our electroic strips) as they are not filed with the correct exit routes as published in the AIP and the cicz.co.uk website. Then when I view the FPL there is a multitude of lat/long points between Jersey and the destination airfield. Whilst most radar displays can show lat and long on a dropped ‘pin’ it is a guess! (And I could do without that for each flight!)

I am I right to assume that the pilot has just dropped pins in a moving map and taken it directly to the FPL? (It goes without saying that I nutter under my breath about how much easier it would be to have IFR WPs!!!)

As an alternative, we could get the tablet software to output the lat / longs as VOR relative waypoints, e.g., JSY005020, I believe, if that’s easier. Edit: I’ve just had a play and can’t find this option for actually filing a flight plan.

Last edited by Iceman on Wed Apr 07, 2021 7:24 pm, edited 1 time in total.
AlanM liked this
You are still dangerous! You can be my wingman anytime.

AlanM wrote:More annoyingly is when pilots file lat/long - that increases the guessing game!

Does Sky Demon put this in a flightplan if you make a turning point in the middle of nowhere?

Is M4 J16 still a VRP or did that disappear with Lyneham?

I have noticed that this happens if you use VRPs in your SD route and then "just file" - I think this is because the VRPs are not recognised points in a flight plan. I have got into the habit of "editing" these out but you need to be really carefull not to inadvertently mess up the real points...

Regards, SD..
AlanM liked this
Its generally best to make a hole in the sky.......not the ground...

By IMCR -  Wed Apr 07, 2021 7:58 pm
Like 1
Wed Apr 07, 2021 7:58 pm #1838812
I always liked using Charlie Pappa Tango as a convenient WP being St Catherines point on that southern bit of the I of W that sticks out. I am pretty certain it has gone now with the demise of the NDB or is my memory failing me? It was very convenient and for a bit of visual work which up at FL of 10,000 feet and above you could pretty much see from the zone boundary on a really good day. Orist is also very useful if non airways keeping you to the east of the airway and west of the danger areas. One for GrahamB, I am always interested that CIZ get exicted about you then routing to the Cap. I never see the point if you are using IFR WPs, I appreciate in a single you may wish to fly down the beaches before being turned into the zone, but in a twin it really doesnt matter. Maybe it is just a tendency to like to route all VFR traffic via the Cap?
Last edited by IMCR on Wed Apr 07, 2021 8:08 pm, edited 1 time in total.
AlanM liked this

AlanM liked this
You are still dangerous! You can be my wingman anytime.

Top of the class!

Top of the class!

This would be interesting.
AlanM liked this

@IMCR, you may recall the discussion

AlanM liked this
You are still dangerous! You can be my wingman anytime. 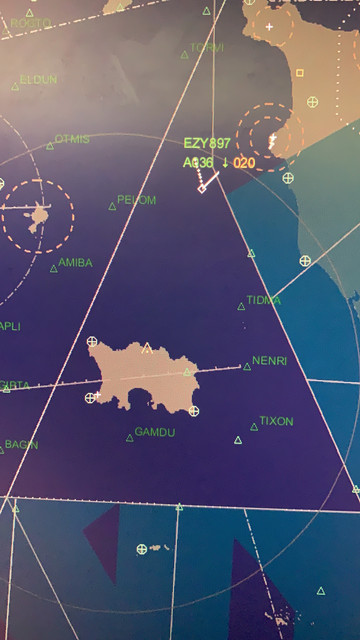 Found this. Only Showing RNP points named. The Jersey VRPs of Corbiere, NW Corner, SE Corner have icons but no names selected (same for all the VRPs on the French coast)

Lots of other RPs have the triangle but no names selected

By IMCR -  Wed Apr 07, 2021 8:20 pm
Like 2
Wed Apr 07, 2021 8:20 pm #1838824
Yes sounds about right to me, scary how time goes by and many a happy memory. I was sailing past it just last year, lovely bit of coast. Started off with 20 knots, by the time we got half way between CPT and the end of the island we had a pretty constant 55 knots over the deck, 10 miles further on back to 20 knots. Never seen such a wind acceleration zone there before, but it may explain why you can sometimes get some nice bumps as you cross the coast and if you head for the rather large mast in the middle of the island!! Went to the fish resteraunt on the beach before they all shut last time in Jersey - now that is a beautiful spot and very good food as well. Been a few times, but cant quite recall what it is called now? Sits on top of the prom, setting outside and in, about 15 mins from the airport. I would really recommend it. Yummy.
AlanM, Iceman liked this