patowalker wrote:
I am now happy to fly my homebuilt in France on either my LAPL or NPPL SSEA and a PMD.


Me too! This trump's the LAA statement which is generally true. Great work and hats off to DGAC for can-do spirit.
patowalker liked this

Shoestring Flyer wrote:Well the LAA still say that a LAPL is not accepetable for flying abroad. See below.
So there is only you who say otherwise which unfortunately won't help when being ramp checked will it.
LAA quote:-
'A PPL with a LAPL medical is not a valid combo for flying outside of the UK as things stand at present (March 2021)'

I agree that a post on here is not going to help much in a ramp check, if whoever is doing the check is unaware of the DGAC's interpretation of the decree. However, the PMD has been accepted from microlight pilots for years, under a similarly worded decree.

The LAA would do its membership a favour by seeking clarification from the DGAC.

My attempts to get the DGAC to confirm that a UK Part FCL LAPL was still valid in France to fly homebuilt aircraft were met with the polite French equivalent of RTFM.
Shoestring Flyer, Rob P, skydriller liked this

Shoestring Flyer wrote:Well the LAA still say that a LAPL is not accepetable for flying abroad. See below.
So there is only you who say otherwise which unfortunately won't help when being ramp checked will it.
LAA quote:-
'A PPL with a LAPL medical is not a valid combo for flying outside of the UK as things stand at present (March 2021)'

That's certainly true for Part 21 aircraft - however in this instance for specifically homebuilt and historical non part 21 aircraft in France only, and subsequent to a change in the regulations that post dates the LAA statement the DGAC certainly would seem to trump the LAA!

I'm joining @patowalker and will now be comfortable visiting France in my amateur build aircraft on my NPPL/LAPL with a LAPL medical/PMD armed with said documents and a copy of the French regulations as posted here.

Thinking about it, it was on that basis that I used to fly it in Europe before 1 January 2021!!

Kemble Pitts wrote:Does anybody know what DGAC would think of a factory-built Jodel 1050, now on a CAA/LAA PtF, being operated in France? Can it be claimed to be a derivative of the D11 (or, actually, of the D10) and so predates the 1955 design cut-off?

Thinking about it, it was on that basis that I used to fly it in Europe before 1 January 2021!!

A friend of mine who flies a factory built 1050 asked this of the LAA and was told that no it doesn't predate the cut off and so needs individual approval from the French Authorities. 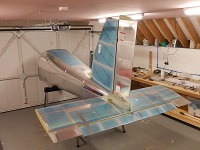 The courtesy translation has not been updated, but the French version has.
https://www.legifrance.gouv.fr/affichTe ... 0036437838
Rob P, wigglyamp liked this

France has tightened restrictions on foreign travellers in an effort to limit the spread of the coronavirus variant first identified in India.

The new rules come into effect today 31st May 2021 and include:

• Entry to France limited to EU nationals, French residents, and those travelling for essential purposes

The new rules include travellers from the UK and cover entry by air, car, ferry and train.

It also covers people regardless of vaccination status.

The Consulate General of France in London said on its website: "Given the development of the so-called Indian variant, health measures have been tightened for people travelling to France from the UK."

It added that from Monday morning "compelling reasons will be required for foreign nationals outside the EU not resident in France to travel to France from the UK".

The website said "a PCR or antigen test less than 48 hours old will be required from anyone travelling to France from the UK" while on arrival "travellers are obliged to self-isolate for seven days".

The information added that "due to the low incidence of COVID in the UK, for the moment they will not be subject to systematic checks where they are staying".

The rules for people arriving in the UK from France have not changed - France is an amber destination, meaning the government advises against travelling there.

Those who do must isolate for 10 days and take two COVID-19 tests after they arrive in the UK.

France's move follows Germany starting to require people arriving from the UK to go into quarantine for 14 days, again in response to the spread of the Indian variant.

The courtesy translation has not been updated, but the French version has.
https://www.legifrance.gouv.fr/affichTe ... 0036437838

So, essentially, this reverts us to where we were prior to 1 Jan 2021. My understanding up to that point was that the Jodel 1050 was accepted as meeting the Annex I criteria with the 'prior to 1955 design' bit being based on it being a derivative of the D10 and/or D11.

Having flown it across Europe many times over the last 15 years, and as we're now back on the same rules, I'm happy to continue to do so.

It only takes us back to where we were prior to 1 January 2021 as far as France is concerned. Other countries now require individual permission, because their exemptions only cover aircraft registered in the EU and Switzerland.

I don't think you can claim that the initial design of the DR1050 pre-dates 1955, as it received its CofA on 11/3/60. Stretching the interpretation of a regulation could be costly if an NAA, court or insurer disagrees with it.

However, as mentioned previously, I believe a factory built DR1050 is covered by Article 1.2 in the French exemption.

2. a type certificate or an individual certificate of airworthiness meeting the requirements of Annex 8 of the Chicago Convention has been issued to such an aircraft,

Aircraft referred to in point (d) of Article 2(3)

1. Categories of manned aircraft to which this Regulation does not apply:

(i) aircraft whose:
— initial design was established before 1 January 1955, and

— production has been stopped before 1 January 1975;

Assuming the CAA ORS4 is a 'mirror image' of the French authorisation, then I'd agree with you.