By Wabash -  Sun Jan 24, 2021 7:30 pm
Like
Sun Jan 24, 2021 7:30 pm #1822071
It all feels inevitable without gov. stepping in. In summary those airfields in the back of beyond far from population centres will survive, so enjoy the scenic drive but on the plus side hangarage should be cheaper to offset your commute costs, maybe consider a static caravan onsite like the gliding clubs and go weekending..hang on a sec isn't that a bit like hangar homes

By BoeingBoy -  Mon Jan 25, 2021 8:35 am
Like
Mon Jan 25, 2021 8:35 am #1822098
I believe they did go down the road of getting one, and may even still be working on it. However when I asked why they hadn't got one the reply was that the whole process was so complicated and drawn out. To provide an example of that, on the application form they were asked a question that no one could answer. They phoned the CAA to clarify what the correct response should be and after much research the CAA came back and admitted that they didn't know either.

Given that the cost of approving an approach no doubt runs well into five figures the return on investment is unlikely to be achieved in the short term since the field is quite remote with poor road connections and unlikely to attract the sort of people who would use it compared to BHX.

In June 2014 Grant Shapps announced the publication of CAP1122 at Aero Expo held that year at Sywell. This was the document I helped write which was designed to help aerodromes without Approach Control or an Instrument runway construct safety arguments that militated against the risks associated with such approaches in the absence of the usual safety nets.

I can't remember when Alastair left but the impetus left with him and the application was eventually withdrawn.

There is now a push from the SoS at the DfT to introduce more approaches and I/2p Green would be an ideal candidate to benefit from such support.

BoeingBoy wrote:..the field is ..unlikely to attract the sort of people who would use it compared to BHX.

It seems not long ago that it (briefly ?) restyled itself 'Wolverhampton Business Airport'

Bathman wrote:And of course has an NDB/DME approach. Thus I can't understand how it can take so long and be so expensive that a GPS approach isnt commercially viable.

I don’t think you’ll find it has a -published- NDB/DME approach.

Like a number of small airfields it may have an unofficial one used for training only, but anyone can draw up one of those and start using it.
GrahamB

The good news is that a new design company was approved last year and there has definitely been some softening in figures quoted for this specialised work. My fees continue to represent fantastic value for money.

CAP1961 was introduced to try to abbreviate the ACP route for smaller aerodromes and that's why I think a refreshed application might look more achievable now.
Last edited by CloudHound on Mon Jan 25, 2021 3:22 pm, edited 1 time in total.

kanga wrote:
It seems not long ago that it (briefly ?) restyled itself 'Wolverhampton Business Airport'

It was a vanity renaming because the owner was chairman of West Bromwich Albion . 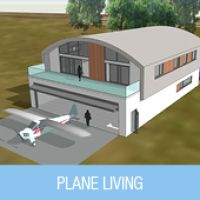 Spooky wrote:If the development does stay true to the plans, it could be a fantastic method of having airfields alongside housing developments. Other positives could be opportunities for my flight schools, more hangarage etc Obvious danger is that it’s simply a method of getting a foot in the door for creating a huge housing estate.

Are there plans for hangar homes? Seems a sensible idea if they want the two to co-exist.

I approached the previous owner 4 years ago about putting 18 hangar homes on the eastern corner, and was then contacted by MCR about this, but they were not interested, presumably because it would safeguard the airfield, which they clearly do not want to keep. A combination of hangar and conventional homes could work, but not if there are only conventional homes.
Website: www.hangarhomes.co.uk
Email: www.info@hangarhomes.co.uk

peteranthonyday wrote:
I approached the previous owner 4 years ago about putting 18 hangar homes on the eastern corner, and was then contacted by MCR about this, but they were not interested, presumably because it would safeguard the airfield, which they clearly do not want to keep. A combination of hangar and conventional homes could work, but not if there are only conventional homes.

Tbh, I can't ever see an airfield owner selling a plot for hangar homes as a single resident then potentially controls the future of the entire site for ever. The only way you will ever build hangar homes is by owning the airfield first.

The oldest house I own was built in 1913, if that was a hangar home, it would be on the edge of a little grass field with a few bleriot's flying off it on dry, sunny days. That hangar home wouldn't appeal to todays Cirrus owner.

Imagine what we will be flying in 50 years time, electric VTOL, Starks Iron Man suit maybe. If one hangar home owner with runway rights happens to have converted his Spitfire to run on bio-fuels and refuses to surrender his rights to the 1000mtrs of tarmac that only he uses, the landowner is stuffed.

Even my "crazy" pilot owned airfield idea could one day have to throw in the towel and hand its nest egg to our heirs.
Spooky liked this
The quickest way to fall out with people is, discuss politics.