Personal connection?
Frank Voeten
Use email please rather than PMs 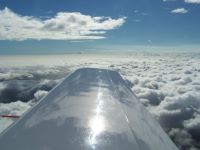 By Gordon Freeman -  Sat Jan 02, 2021 12:50 pm
Like 5
Sat Jan 02, 2021 12:50 pm #1817574
Hmm, this takes me back to my early days of Aviation.
I was in contact with Messrs Fountain and Johnstone at this time. The aircraft was a modified Huntair Pathfinder as manufactured by the late Steve Hunt from his premises at Truleigh Sands airstrip north of Brighton. At the time of the incident I was operating a Microlight sales and training company based at Lydd airport. I met with the two incumbents many times as they were very enthusiastic about the 'new microlight genre'. I recall they expressed aspirations to modify their aeroplane to improve roll authority, which was a tad sluggish.
They embarked on a number of "improvements", in particular around the installation of Ailerons in an endeavour to improve roll authority. I saw the mods myself and also had several conversations subsequently, discouraging them from proceeding. As outlined in Avion Ancien's post above, the new ailerons were rather 'basic' and had far too much deflection, especially in the downward direction (around 50 degrees down when I saw it). I explained to the gentleman about 'aileron stall' and how this might be mitigated by the incorporation of aileron differential including drawings of how they might achieve this.

I recall a last telephone call the day before the accident when Mr F told me they planned some 'Hops' the next day for testing. I implored him not to attempt the flight as Hops often resulted in unintentional flight, I know because that's how I learned to fly myself during experiments with a Quicksilver MX I had operated myself in 1981. It was very sobering to hear the dreadful news the following day. They were both lovely blokes with perhaps too much enthusiasm, but then these early years of Microlighting were fraught with issues, some of which impacted my own firm as we were dealers for the renowned Scorpion Microlight, which very nearly killed my best mate.
In hindsight, this was an avoidable accident, but then with hindsight most of them are. I hope this assists in Avion Anciens researches. I was extensively involved in these pioneering Microlight activities, and certainly have some knowledge of the aeronautical shenanigans that surrounded it.
Last edited by Gordon Freeman on Sat Jan 02, 2021 3:02 pm, edited 1 time in total.
G-BLEW, JAFO, patowalker and 2 others liked this

It's interesting that you mention the Southern Aero Sports Scorpion. I've been researching this microlight as well, particularly the fatal crashes of G-MMMM (Christopher Hawes) and G-MBUN (Lolita Strauss/Anthony Gascoyne) and the near fatal crash of G-MBLI (Graham Hillier). I assume that it is to the latter that you refer when you say that it nearly killed your best mate.

avion ancien wrote:Thank you, Gordon. Your input is most helpful. It sheds new light the evolution of the Microwave - which, hitherto, I had assumed to be a bespoke design, rather than a modification of an existing microlight.

It's interesting that you mention the Southern Aero Sports Scorpion. I've been researching this microlight as well, particularly the fatal crashes of G-MMMM (Christopher Hawes) and G-MBUN (Lolita Strauss/Anthony Gascoyne) and the near fatal crash of G-MBLI (Graham Hillier). I assume that it is to the latter that you refer when you say that it nearly killed your best mate.

Yes indeed Avion. G-MBLI was our single seater. I am pleased to report that following 18 months of surgery and re-habilitation, Graham completed a successful career and is retired and thriving today, although he understandably never flew again.

Looking back, it was a very exciting time. I flew Eagle Microlights, Quicksilvers, Scorpions, Mirages, Trikes galore, a CP16 (a quite toe curlingly dreadful design), a Weedhopper and many other experimental machines, some of which, in hindsight I should not have attempted.
In these early days, I recall a number of telephone calls to the CAA in an endeavour to regularise my planned activities. I remember their closing response was that they did not currently recognise these early devices as aircraft, but in the unlikely event I should become airborne in our 'experimental machines', that we would still be subject to Air law!!!

Engine failures were a routine occurrance, I had three in one day. Climb to altitude, engine stops due to holed pistons in the Robin 440 engines. Often I would rebuild the engine with a new piston, clean the barrels with acid, then be airborne again the next day.
By all means PM me if I can assist further, I have many photographs and many tall stories from that era.
avion ancien liked this

By MikeW -  Sat Jan 02, 2021 3:17 pm
Like
Sat Jan 02, 2021 3:17 pm #1817607
Living not far from Truleigh and having been into the strip there, I was intrigued enough to Google the Huntair Pathfinder. There's quite a bit of info, including photos, at http://all-aero.com/index.php/contactus ... pathfinder but it does say that it had "roll control by half span ailerons", so there is a bit of inconsistency of information there.

By Gordon Freeman -  Sat Jan 02, 2021 5:48 pm
Like 1
Sat Jan 02, 2021 5:48 pm #1817645
As I recall, the production Pathfinder was fitted with ailerons, but they didn't work awfully well. The problem was due to the wire braced wing structure not really being rigid enough to react the loads from the aileron, which resulted in a wing warping effect. As the downgoing aileron applies extra lift to the trailing edge, the angle of attack was reduced as the wing warped upwards, reducing the angle of attack at the outer wing sections thus negating any additional lift the aileron might have generated. The result was very poor roll response, if any at all, that's why the majority of the earlier 3 axis types used Spoilerons for roll control. Ailerons only became popular when wing structures were more substantial on later designs.

Looking back, most 3 axis early Microlights had a strong secondary effect of rudder, so in general they could be flown on rudder only, which was a good thing if the ailerons don't work. All these early aerodynamic lessons had been learned many years earlier, but in those days there was a reluctance from the 'elder aviators' to communicate with the Microlight fraternity, so we had to learn all this for ourselves. I would even venture to suggest a form of inverted snobbery existed in GA, at least that's how it appeared to me at the time. They clearly didn't want any of this "microlight riff raff" getting anywhere near their flying club. All a long time ago now.
avion ancien liked this

By avion ancien -  Sat Jan 02, 2021 6:35 pm
Like
Sat Jan 02, 2021 6:35 pm #1817658
I wonder if someone might tell me if I would be trespassing upon terre interdite if I were to post here hyperlinks to another forum where I've uploaded the results, so far, of my research into the accidents involving the Johnstone & Fountain Microwave and the Southern Aero Sports Scorpion microlights.

avion ancien wrote:I wonder if someone might tell me if I would be trespassing upon terre interdite if I were to post here hyperlinks to another forum where I've uploaded the results, so far, of my research into the accidents involving the Johnstone & Fountain Microwave and the Southern Aero Sports Scorpion microlights.

There is a short entry on the Scorpion. I'll paste it a little later.

patowalker wrote:The title of this thread is too narrow for a general discussion on early microlights, a fascinating subject to some of us. Should we open another thread or change the title of this one and carry on here?

Have tried to expand this one