By avion ancien -  Tue Dec 29, 2020 3:00 pm
Like
Tue Dec 29, 2020 3:00 pm #1816828
Does anyone have, or know where I might find, a photograph and/or three view drawing of this obscure, homebuilt three axis microlight which crashed, killing its pilot/designer/builder, near Camber on 14 August 1982? I have a copy of the AAIB report but neither it, nor the CAA, has any more information about this aircraft.

With my thanks in anticipation.

The Aviation Safety Network website seems to indicate that the crash was reported in there. It might tell you no more than you already know but it might just help. 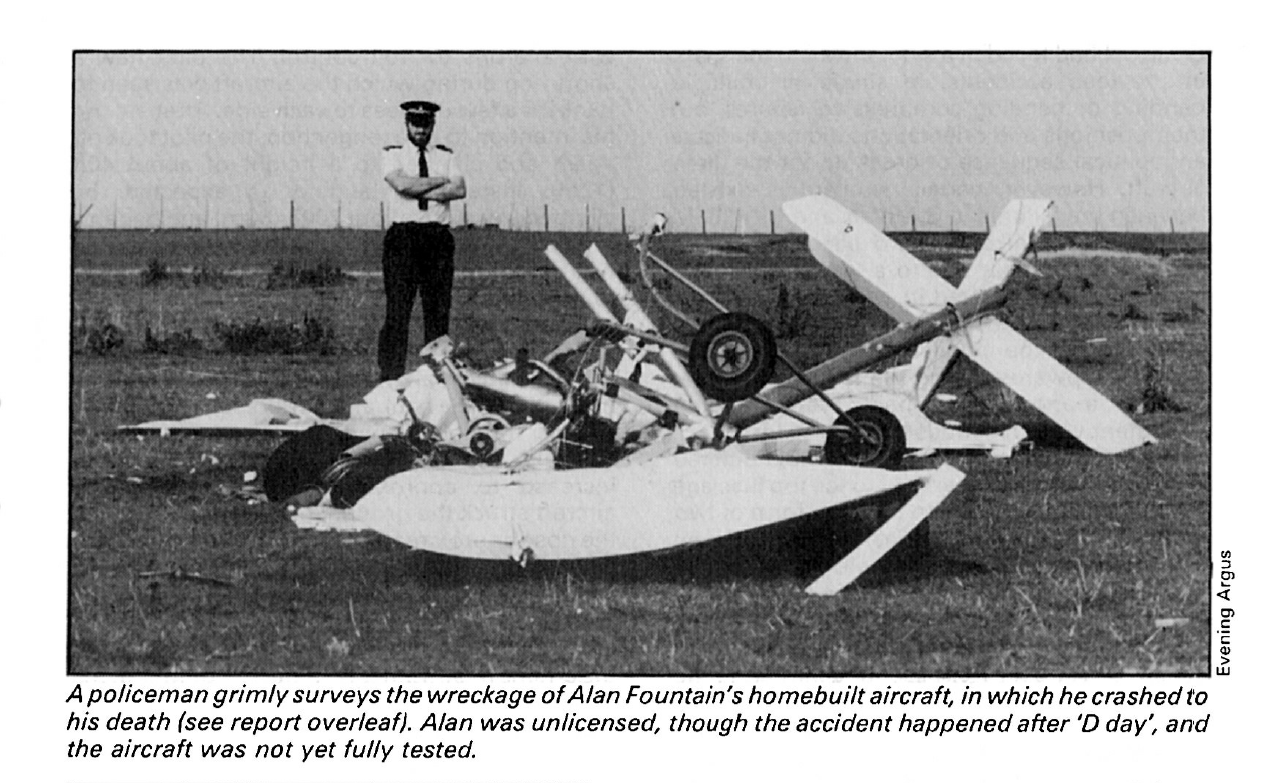 The report mentioned is in the January 1983 issue of Flightline, available on the BMAA website. It looks like a transcript of the AAIB report.
Last edited by patowalker on Tue Dec 29, 2020 10:09 pm, edited 1 time in total.
JAFO liked this

By lobstaboy -  Wed Dec 30, 2020 10:18 am
Like
Wed Dec 30, 2020 10:18 am #1816967
It's worth reading Gerry Breen's book "On Plastic Wings" for an insight into the very earliest days of microlights in the UK. Some were quite literally built from scaffold poles and sheeting from the builders merchant.
Im making no reference to the accident under discussion (I know nothing about it) but they definitely were pioneering times.

As to the design defect, originally the aircraft had spoilers for lateral control. However an experienced PPL holder, who test flew the aircraft, said that whilst it appeared stable, its handling qualities would be improved by replacing the spoilers with ailerons. This the designers/builders did. The ailerons that were fitted were flat plywood plates, 1.625 metres long, with an average width of 15 cm and hinged to the wing's trailing edge. They had a range of 40º either side of their neutral position, a range which the AAIB noted to be much beyond the normal range (probably they worked more like flaps than ailerons). There was nothing in the design or construction of the aircraft to counteract the high drag that would be experienced from the ailerons at their full downward range or prevent them from going down so far as to cause the wing to stall. Furthermore, no ground trials of the modified aircraft were carried out to ascertain its likely flying characteristics.

As to the pilot's lack of flying experience and skill, the AAIB report notes that the pilot's flying experience comprised '3 passenger flights in light aircraft and 20 to 30 short hops and circuits in microlight aircraft'. However he, rather than the experienced PPL holder, undertook the first flight after installation of the ailerons. He first made a short hop in the aircraft, using the elevators to bank only slightly to port and starboard. He landed and then took off again, indicating an intention to make a longer hop. However this hop turned into a flight. He climbed to 200 feet and, flying slowly at low power, made a gentle turn to port. Having turned through about 135º, the aircraft's angle of bank increased. As the turn became steeper, the aircraft started to descend. The pilot applied full power. However still the aircraft descended until it crashed into the ground at an angle of 45º down with its wings vertical and its rudder central. Perhaps a pilot who had more experience and skill might, despite the apparent design defect, have been able to manage the aircraft's less than perfect flying characteristics and, at least, return it to the ground without sacrificing his own life. But maybe such a pilot would not have flown the modified but untested aircraft in the first place!
JAFO liked this