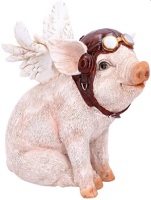 Lefty wrote:Does this suggest that negotiations to stay in EASA aren’t going too well?

The official line is that we are leaving EASA. The detail of what we will be doing instead has been thin, fanciful or non-existent.

I suspect the webinar will be a waste of time, I understand the CAA know no more than us lesser beings, it's the Gov who make the legislation and are having the discussions, if they don't have the answers yet then I doubt the CAA will. It will be bluff, blunder and bluster all-round.

Genghis the Engineer wrote:... Yes, the CAA should accept the EASA approval, but the CAA must also ensure it understands it, and is in a position to second guess it IF there's good reason (for example if there was an independent CAA approval of the 737-8max we'd quite rightly expect CAA to be rapidly and competently looking at that in parallel with the American re-examination). ..

Topical example, indeed. If there is an EASA decision on 737Max (accept FAA decision, insist on further mods/tests or further delay to see how things go in FAA-land, or absolutely refuse to allow flights with passengers in EASAland or in EASA-reg aircraft or with EASA-domiciled airlines) after 1 Jan, would this be the first publicly-visible (and likely to be publicly discussed in the media, specialist and 'popular') to need to be made by a post-EASA CAA ?

[I doubt the tabloids would be very interested in the competence of the technical evaluation of new GA avionics or of a new GA electric motor]
(mere guide at) Jet Age Museum, Gloucestershire Airport
http://www.jetagemuseum.org/
TripAdvisor Excellence Award 2015
http://www.tripadvisor.co.uk/Attraction ... gland.html

Skybolt1 wrote:A click on the link in the thread reveals that the 'position is closed'.

There are alot of job adverts like that - Where an advert is circulated for a position that is actually already taken by someone internally but they have to advertise openly.
Its generally best to make a hole in the sky.......not the ground...

Snorker wrote:I understand the CAA know no more than us lesser beings, it's the Gov who make the legislation and are having the discussions, if they don't have the answers yet then I doubt the CAA will. It will be bluff, blunder and bluster all-round.

I didn't feel like I could "like" this post, but thoroughly agree with the sentiment - even the good people at the CAA are feeling the strain of being asked what's going to happen, while the body themselves don't have significant negotiating powers until the political arena calms down.

By Skybolt1 -  Thu Nov 19, 2020 8:57 pm
Like
Thu Nov 19, 2020 8:57 pm #1809778
I would imagine certification specifications would default to CS23 or CS-VLA for light aeroplanes. It's a non-issue, you just propose what you will use in a certification plan, and it has to be appropriate for the job. BCAR Section K is still used for some 'legacy products'. It's all very well accepting extant EASA and FAA approvals, but there are UK companies designing and certifying products in the UK, which need to be sold all over the world. I doubt we would start in the new regime by creating our own certification specifications, when there are perfectly good ones which are internationally recognised. The last time I looked at FAR Part 23, however, it had gone off the rails! I think the UK already has mutual recognition agreements with some countries. I cannot remember which.

They plan to revise BCARs Section A and Section S.

Look out for Consultation early next year.

By Genghis the Engineer -  Thu Nov 19, 2020 11:40 pm
Like
Thu Nov 19, 2020 11:40 pm #1809802
Determining the right design code can take a lot of skill and work, not to mention detailed negotiation between the authority and companies. It is seldom as simple as "exactly this standard", and then after that, there can be a lot of effort ongoing to determine the subtleties of compliance methods.

Regarding revision of Section S - that's essential with the move to 600kg microlights, but I understand that there are pan-European negotiations going on about finding mutual recognition between particularly the UK, Germany and Czech Republic.

Section A is approval procedures for national aircraft. It was an absolute dead-cert that would be revised as we leave EASA.

And yes, the new Part 23 is a complete pig's ear. But it's also basically the same now in the USA and Europe, I imagine that the UK will be talking to the various drafting committees about it, and we're well on our way to a world standard anyhow. LSA and part 25 are also well on their way to world standards as well (although 25 has managed to remain rather less of a mess than 23 and LSA, so-far!).

By Stampe -  Fri Nov 20, 2020 8:25 am
Like
Fri Nov 20, 2020 8:25 am #1809829
Exactly what I hear they have a dreadful reputation as an employer.No doubt an announcement soon of the appointment of former Airforce ground branch controllers with stalled military careers no knowledge of civil aviation and home study M.Sc in “Air safety Management” from a former polytechnic (£23k).To serve out the next 20 years trying to destroy what’s left of Civil Aviation with their general incompetence.
Rollasons "This aircraft is British Made - Private Enterprise and No Taxpayers Money".
"All aircraft bite fools"

Then a payoff not to have a job 14 years later.

Genghis the Engineer wrote:And yes, the new Part 23 is a complete pig's ear.

Can you expand pls? The two or three manufacturers I've spoken to about it are very positive, as is GAMA (As in General Aviation Manufacturers Association) as you can see here

.. and further note that 'Head of Strategy' is only a 1-year appointment, and for a current Civil Servant (Central or Devolved) would only 'on loan'. Oh, and this 'Band A' leads 2 'Band B' Advisors and only 1 'Band C' "Delivery Coordinator". 'Strategic Thinking' and 'Advising' are clearly more important (requiring 3 higher-paid incumbents) than 'Delivery' (1 person getting things done). I'm guessing (but do not know) that only the last will be a career Civil Servant familiar with the pertinent policy and practical issues, having to cope with constant turnover bosses posted in temporarily from outside, and evidently sought from outside Government, who will have to be brought up to speed from scratch. Obviously, any failures in 'delivery' will be blamed on the hapless Band C ..

Closing date 30 November, so be quick!

Genghis the Engineer wrote:And yes, the new Part 23 is a complete pig's ear.

Can you expand pls? The two or three manufacturers I've spoken to about it are very positive, as is GAMA (As in General Aviation Manufacturers Association) as you can see here

Part 23, as it has existed for at least a quarter century was a reasonably straightforward set of requirements - and built by several well defined committees and authorities. Issues you had could be addressed with an authority who understood the requirement, and in extremis things could be referred to the drafting committees - as was actually quite necessary when new technologies came along. You could take an aircraft TCDS, check the approval basis, and know exactly what you were dealing with in terms of the safety requirements.

With the latest form of CS.23 (and LSA which uses substantially the same approach) all that is gone. The hard requirements we all understand and for which there is a great deal of (usually) clear interpretative material is carted off into interpretative material, essentially sidelining a half century of built up knowledge on how to ensure a safe aeroplane. There are also vague lists of other standards that *can* be used, many of which (such as the ASTM standards) sit behind paywalls so a quick check on the approval basis of just part of an aeroplane costs me £50 or more (as in fact just happened last week looking at something on an LSA aircraft). The management of those standards has also been moved out of the well understood authority processes, to bodies who will basically give a voice to anybody prepared to pay for a seat at the table. Then EASA, having subcontracted stuff out, start adding their own interpretative material and exceptions to documents they don't actually control themselves.

Some standards: part 25, part 22, Section S, VLA, have not gone down that road. Parts 23 and LSA have, and have become extremely hard to work with -and certainly when you approach an aeroplane as an outsider to the OEM, you are spending a lot of time scouting around trying to work out just what the heck was the basis of approval for the basic aeroplane or system, so that you can just start to understand what the approval basis was of the thing you're trying to modify or design.

G
patowalker liked this
I am Spartacus, and so is my co-pilot.