Duo802 wrote:Quite so. The Scottish Government is spending millions on trying to preserve the language. This includes, among many other things, establishing and maintaining a Gaelic school in Inverness ( an area where Gaelic is not generally spoken), dual language road signage and even the markings on police vehicles and ambulances - all to pander to a tiny minority of Scots.

This Ginger Pixie cartoon from today's DT made me smile 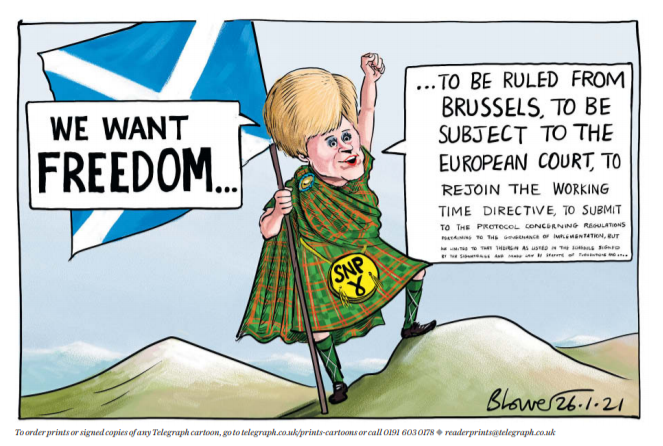 Iceman, Miscellaneous, Duo802 and 2 others liked this
Pete S as was

Miscellaneous wrote:What do we reckon, get rid of diversity and culture with Mandarin, or Spanish?

Well ; there are about thirty people who would like it to be Cornish

kanga liked this
Pete S as was

So I don’t understand the battle to bring these failing languages back ( Welsh , Irish Gaelic etc) when they only impact a tiny and shrinking number of people.

Latin, for example , has served its purpose in a big and special way, but there’s no campaign to bring it back into widespread use.

For Welsh, at least, I'd dispute 'failing' and 'shrinking'. It's the non-English language whose online courses by ISTR two major providers have been most subscribed by new UK-based learners during the last lockdown year.

[And I'd personally welcome a widespread reintroduction of Latin into the school curriculum, as early as possible, as an excellent gateway for native anglophones to the ideas of grammar and prosody and so to other modern languages; this is because modern spoken and colloquially written English is so imprecise and inconsistent in both, making the required discipline of both in many other languages difficult to grasp for the new learner if they are not encountered until Secondary age. But I realise that I may be in a minority, and I am not 'campaigning' on the subject

Well ; there are about thirty people who would like it to be Cornish

I hope there are lots of new bilingual signs around the G7 venue at Porth reb Tor (Carbis Bay), including at RAF St Mawgan er Newquay Airport er Ayrborth Tewynblustri

I think there's going to be a slightly different version in English airing some time this summer so will let you know when I know.

Sad to hear I wasn't dubbed into Gaelic

mick w, T6Harvard, kanga and 2 others liked this
Matt Dearden
In the jungle somewhere...
My Blog: http://www.bushflyingdiaries.com

https://www.britannica.com/art/prosody
Suiting the action to the words

Charles Hunt wrote:I think that's twice in a week that Kanga has used prosody. So for any others as ill educated as wot I be.....

MikeB, kanga liked this
Pete S as was

By Bill McCarthy -  Tue Jan 26, 2021 12:52 pm
Like
Tue Jan 26, 2021 12:52 pm #1822366
Since BBC Alba is a Gaelic broadcasting station, the program was subtitled into English where necessary. The participants who had no Gaelic were broadcast in their own tongue and not sub’d to Gaelic.
Did the broadcast give credit to the garage owner and residents nearby ?
Alba is a gem of a station - but a bit heavy on bagpipe and fiddle music (as you would expect) !
Antagonise no man, for you never know the hour when you may have need of him.

Bill McCarthy wrote:Since BBC Alba is a Gaelic broadcasting station, the program was subtitled into English where necessary. The participants who had no Gaelic were broadcast in their own tongue and not sub’d to Gaelic.
Did the broadcast give credit to the garage owner and residents nearby ?
Alba is a gem of a station - but a bit heavy on bagpipe and fiddle music (as you would expect) !

No but they spelt Moose’s name wrong in the credits

Some sad Catalina news - my 1/48th Cat which I built about 15 years ago has suffered a starboard undercarriage collapse. I haven't looked at the possibilities of repairs with superglue and some steel pins yet but I suspect she may have to end up hanging from the beams in my bathroom - which is why I originally bought the kit.

It was us, Coleman TV, the Plane Resurrection folks, makers of the 'Thats All, Brother' TV show and so on.

Thank you all for the kind comments about the show last night on BBC Alba.

There's a different, English version on screen across the world in the summer.

Going to crouch down in the trench again now in case there's any incoming...

Nik
MachFlyer, Pete L, Morten and 1 others liked this