The Catalina Society wrote:She flies! Miss Pick Up went back onto the waters of Loch Ness early this morning and successfully flew out to Inverness Airport where she is currently being inspected. In due course she will be refuelled and flown south, initially with a night-stop in the Midlands as our base at Duxford is closed due to COVID-19 restrictions. All being well she will fly on to Duxford tomorrow. A tremendous effort by the crew and the supporting organisations up at Loch Ness and Inverness - and of course a huge thank you to all those generous individuals who contributed to the GoFundMe appeal. The donations have been a tremendous help towards the huge cost of getting the Catalina airborne again. The photo below by pilot Matt Dearden shows Miss Pick Up being lowered onto the water this morning.

Unfortunately, they seem to have picked up a stowaway, hoping to get a ride south for his hols 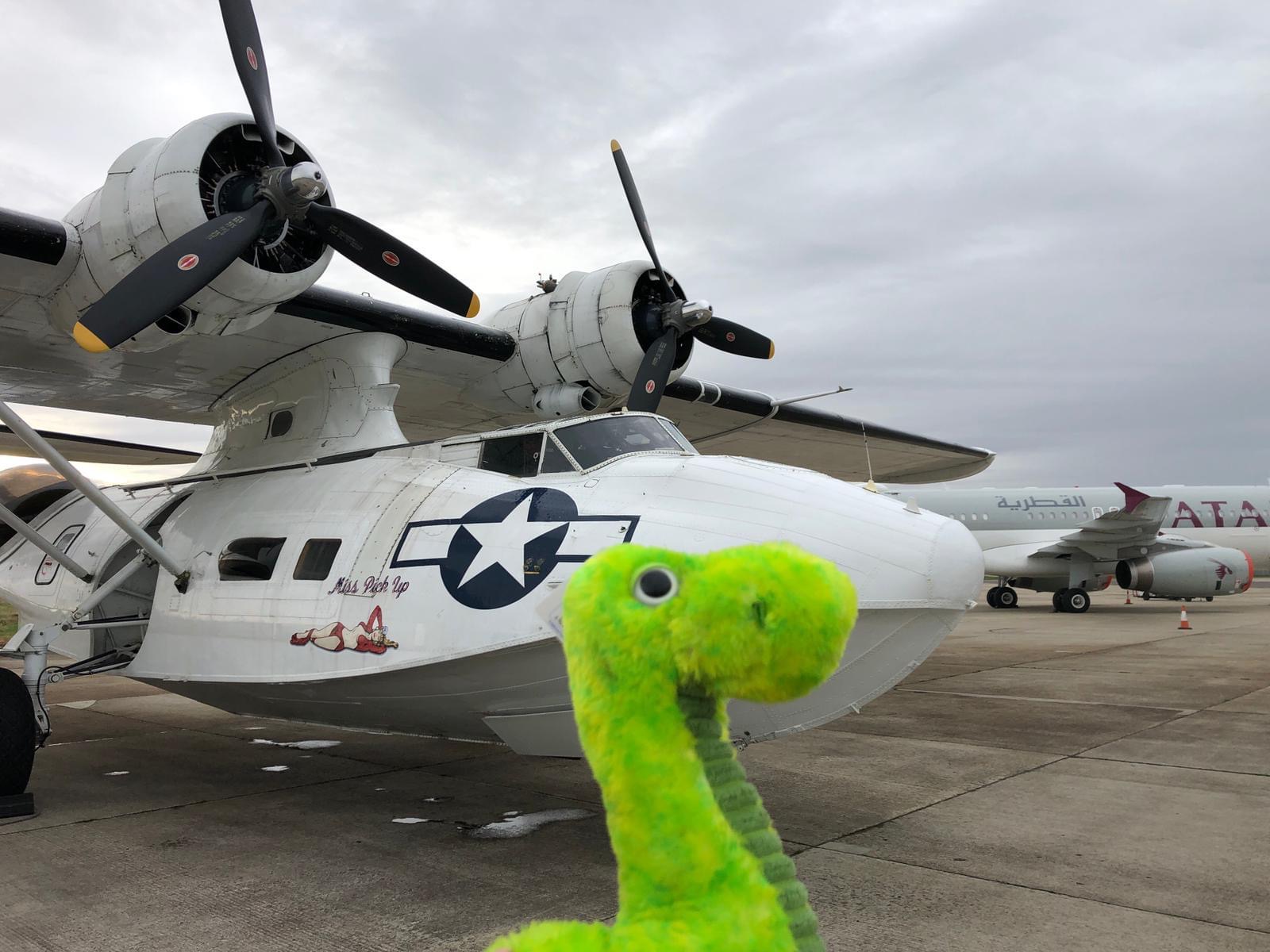 T6Harvard, Dave W, Flyin'Dutch' and 6 others liked this
You are still dangerous! You can be my wingman anytime.

Rumour that she will overnight at Tatenhill - EGBM
Charles Hunt, Iceman liked this

Taxi video at link below

https://m.facebook.com/tatenhillaviation/
Iceman, Aerials, johnm and 1 others liked this

I imagine the team need a few days to recover now.
Flyin'Dutch', Pete L, PeteSpencer and 2 others liked this

Wonder what stowaway Nessie thinks of its new home?
T6Harvard, Iceman liked this

@Bill McCarthy have you read 'The Sky Beyond'? A brilliant book by Sir Gordon Taylor, largely flying in the 1940's and early 50's, much in the Catalina. It was clearly a love affair. Highly recommend, it is my favourite aviation book to date.

Words cannot describe how lucky we were with the weather over the last two days. The team awoke at 0530 on Tuesday in order to be in place at the quayside by 0630 ready to take advantage of the forecast light winds. With the air temperature just above freezing and sunrise not coming until 0820, the guys from Stoddard crane hire got into place whist the flight crew of Paul Warren Wilson and Matt Dearden ran the engines up before the lift.

With everything looking good, everyone held their breath whilst Miss Pick Up was returned to the waters of Loch Ness for the final time. With the engines still warm, Paul started them up and water taxied the big Cat out into the main channel ready for the take-off run. During the orbits to complete the pre-flight checklists, the waves were surprisingly large; crashing over the cockpit and temporarily restricting the view ahead.

The wind was picking up but with Miss Pick Up back in her element, it was all systems go! With the engines powered up for take-off, she leapt out of the water and skimmed the tops of the waves before lifting gracefully into the air. It was job done and smiles all round for the quick hop into Inverness airport.

It then took some time to get the rest of the crew from Loch Ness to Inverness airport via road. There was a slight vibration issue from the newly replaced right engine that Garry Short, our lead engineer, found to be due to an HT lead that had come loose. It is a testament to the whole team that this was the only fault after six weeks of maintenance in a remote location. With that fixed and Miss Pick Up refuelled, it was time for the final leg home to IWM Duxford.

Unfortunately, the airfield at IWM Duxford was closed due to current affairs but would be able to open specially for us on Wednesday. However, if we stayed in Inverness for the night, that would increase the risk of us getting stuck waiting for a weather window large enough to fly the near 500 miles back from Scotland to Cambridge. The decision was made to fly as far south as possible on Tuesday afternoon in order to minimise that weather risk. With limited daylight hours, a location in the Midlands was chosen just 100 miles from IWM Duxford.

The flight south went perfectly. Taking in the stunning views of the Scottish Highlands, Lake District and Peak District en-route in the watery winter sunlight. Miss Pick Up touched down some two and a half hours after departing Inverness for her night stop just before sunset. The crew put her to bed for the night under the stars and hoped the skies didn’t stay too clear as frost would have presented a further problem as she cannot fly with ice on her wings.

Thankfully the skies did cloud over and kept the frost away. With the en-route weather looking ok and Miss Pick Up raring to go, she took off into the winter skies once more for the final time this year. After another smooth flight, Miss Pick Up touched down on runway 24 at 1148 on Wednesday 2nd December having spent over six weeks stranded at Loch Ness.

Thank you again to everyone who has donated to this rescue mission. We are eternally grateful to you all. Please do come and see us next year at IWM Duxford were we would be delighted to show you around Miss Pick Up and thank you in person for your generosity.
Dave W, Charles Hunt, Iceman and 3 others liked this