Damage was spotted on our aircraft this morning. We managed to track the "culprit" aircraft with the help of Aeros Cardiff.

Happily, the damage to our aircraft isn't major, though it will cost a few £££'s to fix.

Contacted the school who own the aircraft, who readily confirmed the white winglets on their aircraft have newly acquired red stripes, and to be fair are extremely apologetic and have offered to meet all our repair costs. Unfortunately they have had to ground their aircraft pending an inspection. The pilot concerned, apparently a student, is said to be mortified.

Guess the morals are taxy carefully and don't take those pre-flight inspections for granted! 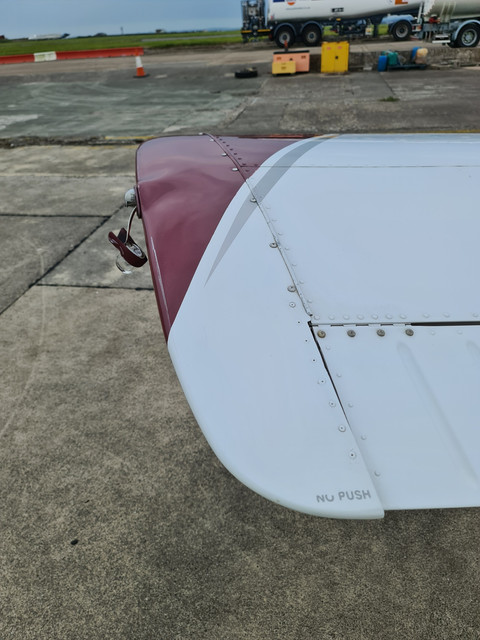 @MikeB Should your a/c be grounded as well for inspection, or did Aeros witness the force (or lack of) of the contact?

By MikeB -  Tue Sep 15, 2020 5:25 pm
Like 13
Tue Sep 15, 2020 5:25 pm #1796364
Aeros didn't witness the collision, but we would have had an engineer take a look in any event as there was obvious damage. After a couple of phone calls to arrange, Horizon sent an Engineer across from St Athan this morning. A temporary repair was made to the strobe unit. and the aircraft declared fit to fly. Since been test-flown by a fellow group member, who we considered to be the most expendable

PeteSpencer, Charles Hunt, Instructor Errant and 10 others liked this

I hope the student of theirs isn't frightened away; I've seen that before after a very small minor incident like this.

Mike B, I know you reasonably well...after all the finances and Insurance and Engineering are resolved, could you offer the errant Student a flight in your (repaired) aircraft as a gesture of goodwill, just to show fair play...perhaps you've thought of that already!

Rob
Colonel Panic, G-BLEW, Aerials and 11 others liked this

Rob L wrote:...after all the finances and Insurance and Engineering are resolved, could you offer the errant Student a flight in your (repaired) aircraft as a gesture of goodwill, just to show fair play...

Flyin'Dutch', Colonel Panic, Dave W and 5 others liked this

Crash one wrote:If I had been the unfortunate student reading this, I too would be mortified, but at the implication of the thread title!

It all got sorted amicably, so why put it out the world to make the student feel like $h1t?

If it was a Breitling-clad Skygod with full Nomex, Yak 52, tiny willy, and a heavily peroxided/tattooed wife, then I would get the public lambastation.

As for the thread title, I assume you are an editor for the Daily Mail?
L21B, Full Metal Jackass liked this
Never criticise a man until you’ve walked a mile in his loafers

But I’d never dream of saying this on the studes’ forum......

PeteSpencer wrote:...rewarding a trainee for making a mistake which could have had fatal consequences .

That's a ridiculous assertion, as, of course, you well know.