By skydriller -  Tue Sep 15, 2020 9:23 am
Like 1
Tue Sep 15, 2020 9:23 am #1796270
Whenever these "how much to land!!" shock threads come up there are always those that push the arguement "200 quid for your PA28 is cheap, if you were a A320 you would be charged a grand" and "do you know how much it costs to staff an airport?" Which is fine... except that in your ubiquitous PA28 you dont get an airbridge to walk straight into the terminal... Youre shoved to the far end of the airport miles from anywhere... And that 1 tonne PA28 isnt really having the same impact on the runway as an A320, or taking up quite the same ammount of space or organization, nor require even half of the service - though usually you arent offered it anyway!!

Ive said it on here before, I will happily pay for a service, but I baulk at paying for a non-existant "service", especially when you arent told you need to pay for it until you arrive and have no choice...
Cardinal Sin liked this
Its generally best to make a hole in the sky.......not the ground...

.. and Whitchurch, which during WW2 was UK's premier international airport

.. before civil flights transferred to that upstart operation at RAF Lulsgate Bottom

I would note though that their ATC was friendly/helpful in crossing through the airspace both northbound and southbound.

Far too many murders there for my liking.

Rob P
kanga, flybymike liked this
"We sleep soundly in our beds because rough men stand ready
in the night to visit violence on those who would do us harm."
- George Orwell-

But I have heard a rumour that Clutton Hill is closing/has closed.

Shame, it's a lovely spot with a pleasant pub just at the end of the runway.

Dave W wrote:But I have heard a rumour that Clutton Hill is closing/has closed

'Tis true. Next year I believe. 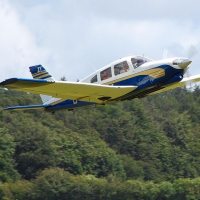 How about this one (New Farm)? (Zoom out just a little.)

If only. My understanding is it's very much based aircraft only. Which is a shame since the person I am collecting lives in the same village.

Yup, but I think the situation in the UK is a bit more complex.

As I understand, many airports today were originally built out of taxpayers' money as military airfields during the war years.

Some were later completely sold to private entities.
Some (like MAG), various councils together own a majority of it.
Others (like Luton), the council owns all of it.

Many larger airports have planning stipulations such that they remain certified/licensed as "public-use" aerodromes and therefore must be available to all to use on equal terms and conditions. They also have limitations on noise & movements.

Separate to the above, these airports do feature in regional/national transport planning policy. Some public body decides whether Gatwick or Heathrow gets a new runway having done a study of future air transport - both don't get to expand at the same time.

So (part-)private or public-owned entities as they may be, there is a legislative framework which they operate within. Public / government bodies do have a say in the operations of such airfields and how it fits within a wider transport network, but I think the average bloke on the street is more concerned about noise and environmental impacts.

GA unfortunately does not feature enough in such talks, but there's no reason why it shouldn't in future. So while the lighter end of GA aren’t the primary customers of larger airports, they still have a value and a purpose and therefore should not be seen as a lost cause.
kanga liked this
If we don't take part in protecting GA access to infrastructure, the smaller aerodromes will be built over, the larger aerodromes will have exorbitant handling fees and awkward procedures, and airspace will be over-classified to Class A everywhere.