By neilmurg -  Fri Sep 18, 2020 11:13 pm
Like
Fri Sep 18, 2020 11:13 pm #1797098
@akg1486 nice pictures thanks. Despite my admitted ignorance of the issues involved, I still think at some point a quick change battery setup will be beneficial. (again, I know nothing)
I have added your airfield to my objectives list, I would love to know more about how the Velis is working for you. Best Regards

neilmurg wrote:I have added your airfield to my objectives list,

Welcome! Sweden is a good place for a GA vacation. Many forumites have posted in Trip Reports.
Autocorrect is so frustrating. It's always making me say things I didn't Nintendo. 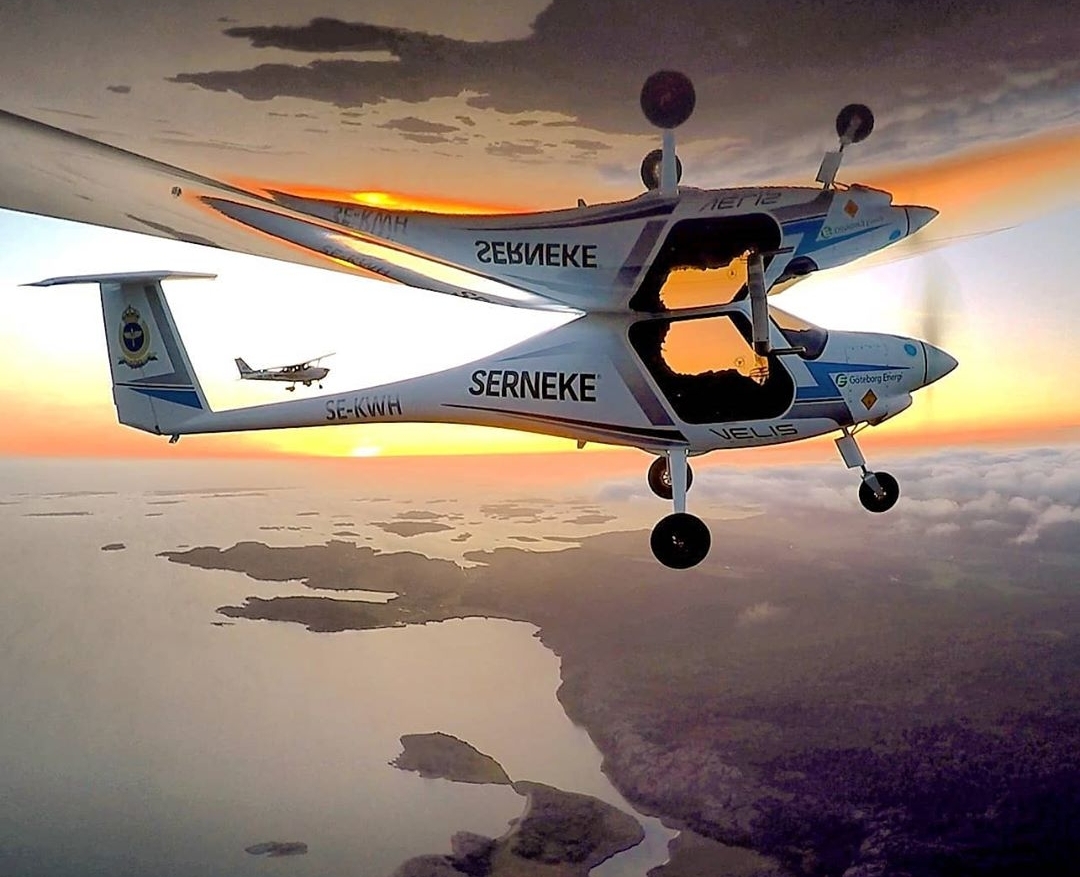 nallen, cecilthecat, rf3flyer and 6 others liked this
Autocorrect is so frustrating. It's always making me say things I didn't Nintendo.

akg1486 wrote:If that means the FCL rating issue is sorted out, or if it's a temporary solution, I don't know.

I just talked to one of the two FIs who did the flights yesterday. They received a two-year rating for the electric aircraft, just like you get a two-year SEP rating. So it's a "real" rating, as opposed to an exception granted for a limited time only. (When I get my own, I'll post a picture of my licence. That may still be some time away since the training material for us "regular" pilots isn't completed and approved yet.)
neilmurg, UncleT liked this
Autocorrect is so frustrating. It's always making me say things I didn't Nintendo.

By akg1486 -  Sat Sep 26, 2020 4:22 pm
Like 7
Sat Sep 26, 2020 4:22 pm #1798605
Today, our flying club invited the media to have a look at our aircraft, learn about it and get a free flight over the city centre. Due to Covid, we'd invited only news media, so no flying magazines or the like. We got three positive answers, so we were visited by the wire service TT, one of the two major evening newspapers and the local station of Swedish television. For most journalists this is probably not regarded as a top assignment, but the members of the press who visited us were very interested and very professional.

For us as a club, the electric aircraft is the bait: the thing that makes them visit. But we also made sure to put both ourselves and GA in general in a positive light.

Sweden's biggest daily newspaper, Dagens Nyheter, picked up on the wire story already a couple of hours later with a short story and three pictures. This is a screenshot from my phone. The caption reads "The first electric aircraft has taken off". The pilot, Rickard Carlsson, is our FI and one of two pilots certified in the country. 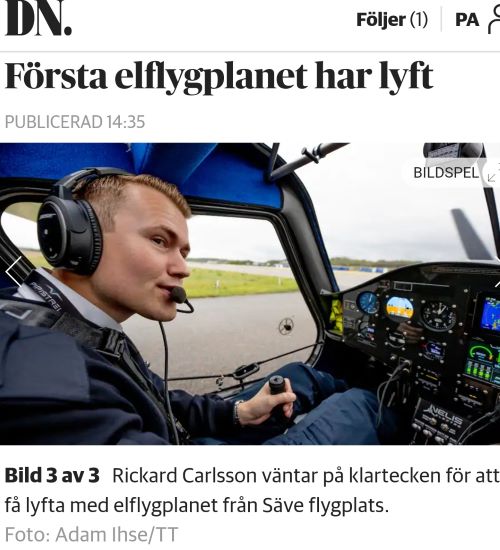 The article is found here, now also updated with a short video: https://www.dn.se/ekonomi/forsta-elflygplanet-har-lyft/. I think it's not behind a pay wall.

Both the aircraft and our current club president had a lot of pictures taken of them today: 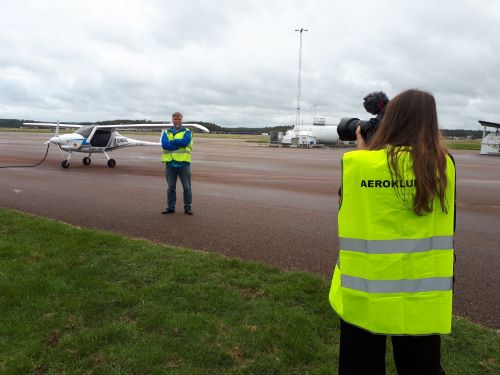 Here's the reporter from the evening paper after a flight that she was most happy with. Her article isn't online yet. 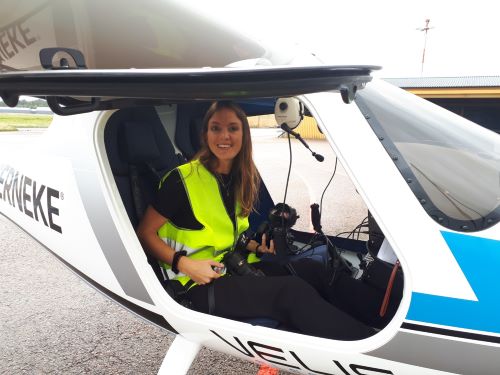 Earlier in the week, we showed our aircraft at an event hosted by Heart Aerospace, whose office is also at our airport. They aim to make an electric commuter CAT aircraft that they say they want in the air by 2026. It's a startup, but they had a successful event attended by the minister for infrastructure as well as Prince Daniel, the husband of our Crown Princess. So we did get some minor publicity there, too.

Next weekend, our aircraft will be taken by truck to Östersund, quite a bit to the north, where it will feature in a documentary. After that, we hope that we regular members can start our training. At the moment, our CFI and one FI have the necessary rating to fly electric aircraft but not to instruct. That's obviously needed first. AIUI, the Swiss flying school who got the very first certified Pipistrel Velis is in a similar situation: they have two instructors who are allowed to fly it but not to instruct. (If anyone knows differently, please post!)

The next milestone for us will obviously be when we can start using the aircraft in the club. That may take some time, then, but I'll post when something interesting happens.
TheKentishFledgling, johnm, patowalker and 4 others liked this
Autocorrect is so frustrating. It's always making me say things I didn't Nintendo.

By akg1486 -  Sun Sep 27, 2020 5:25 pm
Like 1
Sun Sep 27, 2020 5:25 pm #1798797
The public service television in Sweden today featured a short segment on the local news in West Sweden, covering around a million potential viewers. It should be viewable also from outside Sweden; I checked with my VPN turned on. I think we got good coverage from our press event: a positive tone in all media. We’re all amateurs when it comes to dealing with professional media.

The Flying Reporter’s next video, out on Youtube in about a week, is about the Velis. I’ll post a link when it’s out.
kanga liked this
Autocorrect is so frustrating. It's always making me say things I didn't Nintendo.

I now just have to wait for an EASA certified electric helicopter.

Not a classic helicopter but I've always liked the look of it.

- no autorotation capability; an electric plane can still glide, this stuff can’t
- noiser and higher-pitched sound
- whole structure moves to slight adjustments instead of main rotor adapting (people are going to feel ill; the press has not covered this yet)
- how many of these will fit in a hangar?
- looks like hell
Pete L, rf3flyer liked this

- no autorotation capability; an electric plane can still glide, this stuff can’t
- noiser and higher-pitched sound
- whole structure moves to slight adjustments instead of main rotor adapting (people are going to feel ill; the press has not covered this yet)
- how many of these will fit in a hangar?
- looks like hell

- BRS and multiple redundancy -
- quieter than a light helicopter at 4 x distance
...
- beauty is in the eye of the beholder

I just think the 6x3 layout offers a lot more then the classic quadcopter or a single rotorhead / tail rotor - a light helicopter has more than a few single points of failure.

The sickness was intriguing - have you had a go in one, or know someone who has? (Asking for a friend