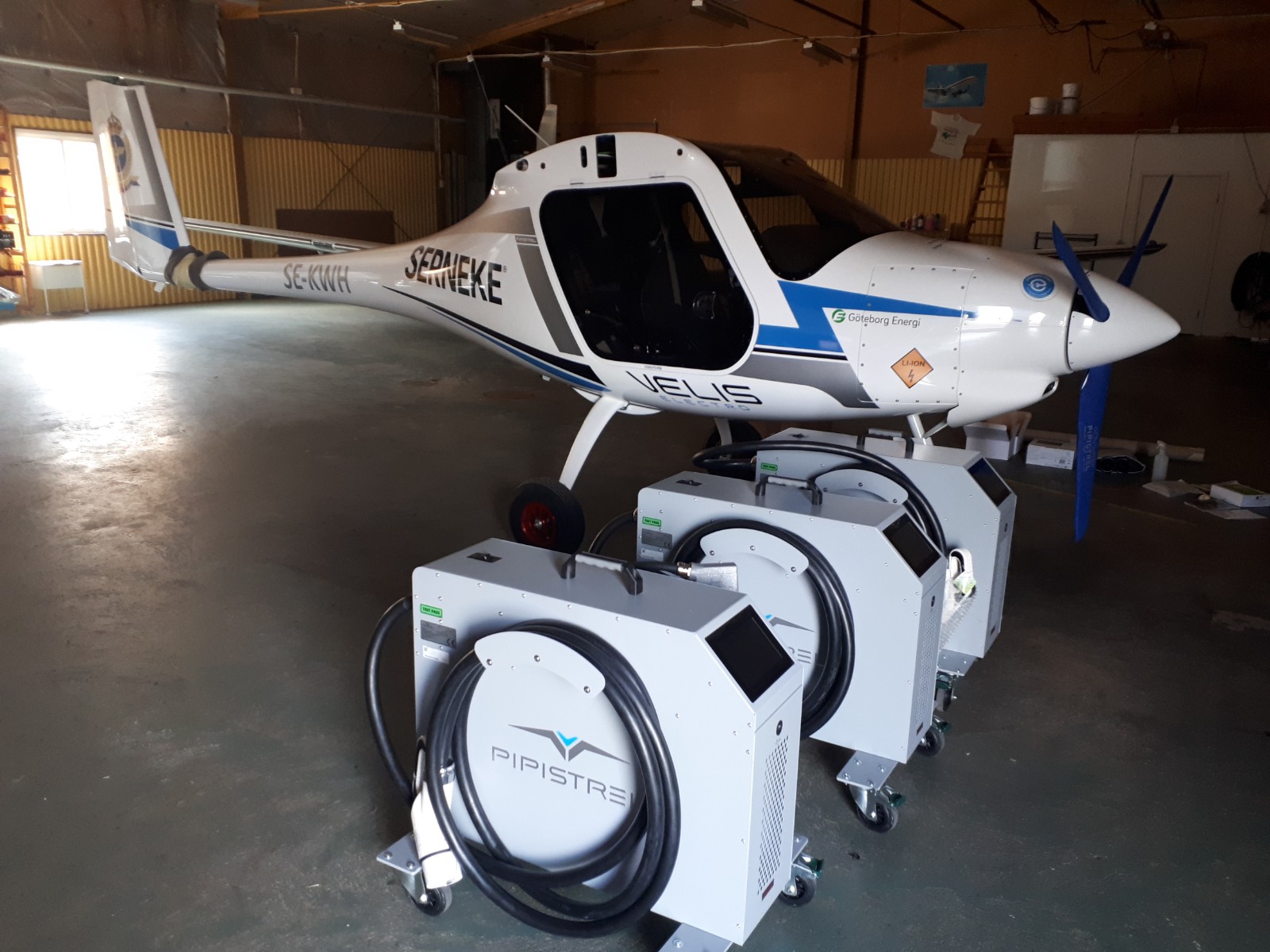 The wings will be mounted tonight; they're waiting for our mechanic to be able to participate. In the foreground are three charging stations. We'll keep one at ESGP Gothenburg/Säve and place the others are neighbouring ESGE Borås and ESGA Backamo, both smaller GA airfields. The regional airport ESGT Trollhättan has ordered a charging station, too.

The charge plug looks a lot like that of a car. "Göteborg Energi" is the biggest provider of electricity in Gothenburg. I guess the ad means they sponsor us a little bit, but I don't know how much. 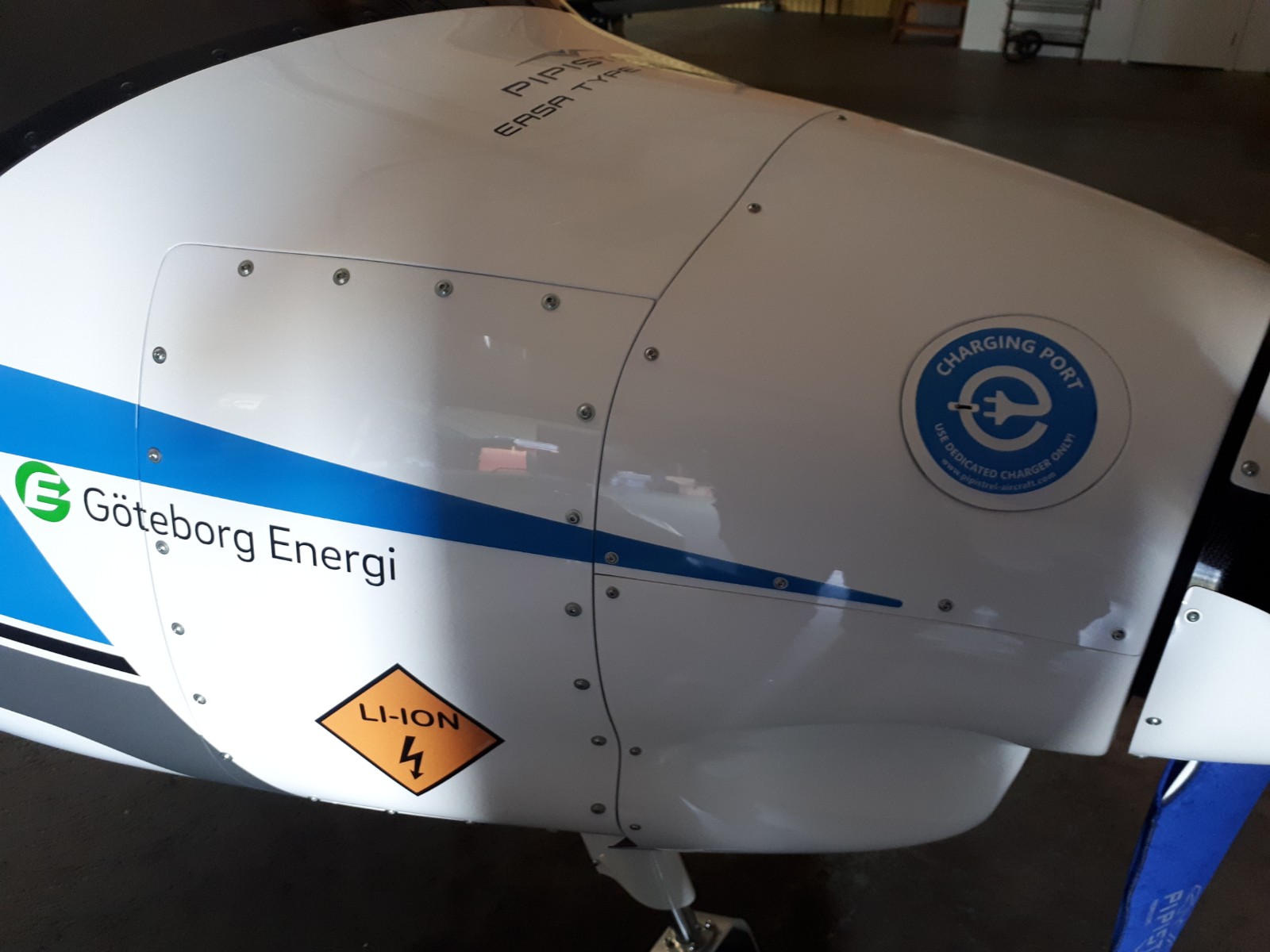 The total battery capacity is 25 kWh, divided into one battery in the front behind the engined and the inverter and one (pictured below) behind the pilot. In a Virus, that's where you place your luggage. No luggage here, but since we can only fly around an hour you don't really have any need for luggage. The pink hose is part of the liquid cooling system for the batteries. That's one of the things that have changed from the initial Alpha Electric which has an air cooling system. 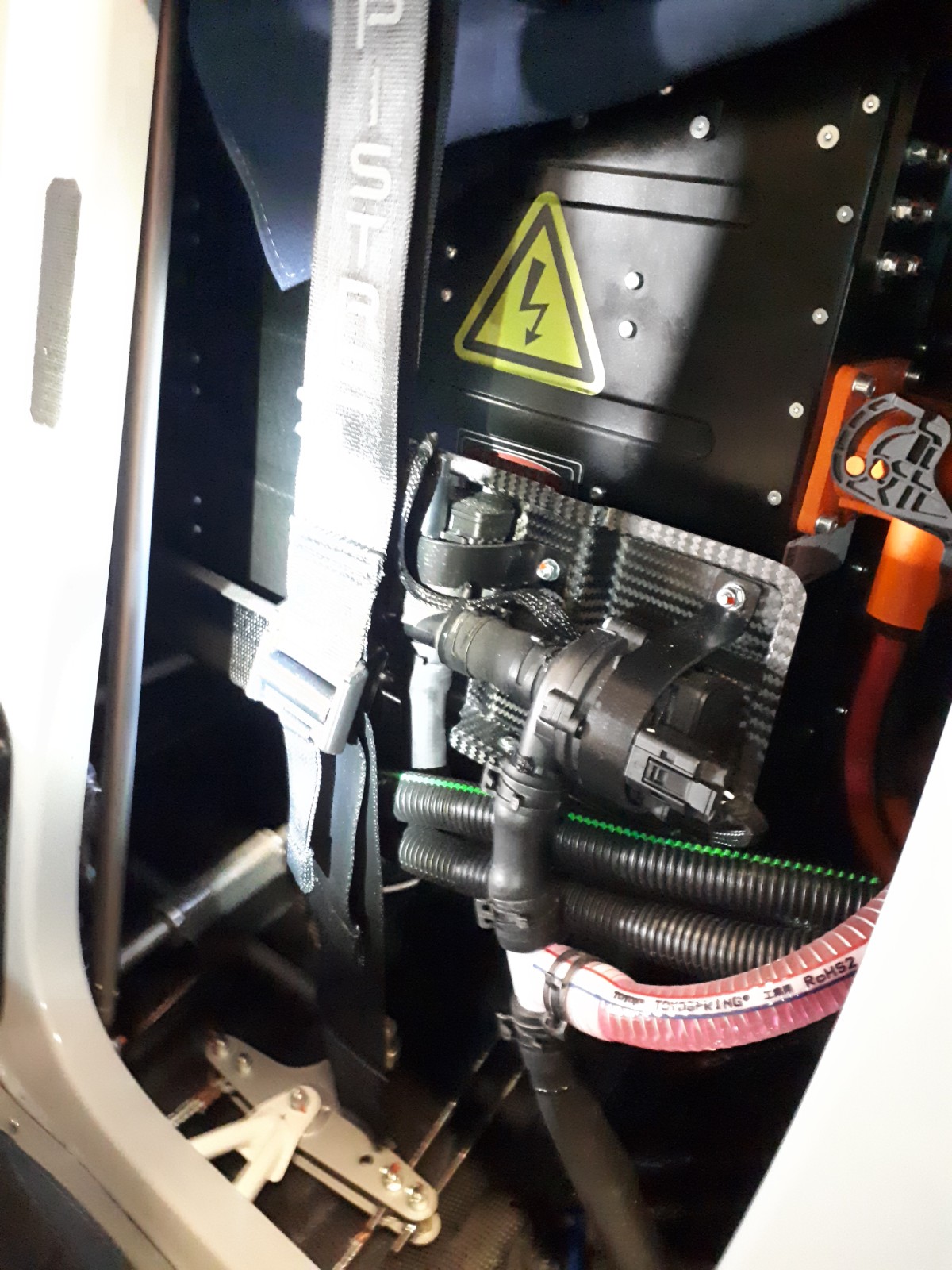 We already have a Pipistrel Virus (the 600 kg version) in the club and around a dozen of us pilots have taken the difference training. We also have two ab initio students flying the Virus. We're told that the actual flight characteristics will be very similar, except the Velis doesn't have the speed brakes that the Virus has.

I thought I'd add posts to this thread as things move along. Our FIs and mechanics will first create training material (based on Pipistrel's, obviously) and routines for charging etc. We don't yet know when we regular PPLs can start training. Feel free to ask questions; I'll answer those I can. For those who want to explain why electric aircraft is a dead end because of the energy density, I believe there are already threads with that topic.

Personally, I'm excited to (soon!) be one of very few GA pilots who've flown electric aircraft. SE-KWH will not replace any of our existing aircraft and its really only useful for circuit work and ~30 minute flights. But it's a start, and somebody has to take the first step. Us having access to the aircraft is very much because of the real estate company Serneke, formerly the owner of ESGP airport, and government grants. Serneke and Göteborg Energi have a solar panel farm just north of the threshold of runway 19, so we can say that we fly on energy collected locally.

By neilmurg -  Sun Aug 30, 2020 9:02 pm
Like
Sun Aug 30, 2020 9:02 pm #1793469
Yes looking forward to hearing about the differences and your experience.
I had thought there might be a quick change battery option (I know nothing). How long to recharge? Is it like the cars in that charging from a low state happens initially very quickly?
What kind of reserve will you operate?

neilmurg wrote:Yes looking forward to hearing about the differences and your experience.
I had thought there might be a quick change battery option (I know nothing). How long to recharge? Is it like the cars in that charging from a low state happens initially very quickly?
What kind of reserve will you operate?

Very relevant and interesting questions. Like I wrote in the first post, there will be a lot I can't answer initially. I haven't been involved in the acquisition process myself; I was an elected official for several years but stepped down some six years ago. So just because I can't answer, it doesn't mean that we as a club don't know. I'll try to come back when I've learned more.

I don't know how quick it would be to replace the battery. I actually don't even know if we'll own any spare batteries. You can see in the picture above that there are some twenty screws to remove to open the panel that hides the battery. Then it needs to be disconnected, slid out and replaced.

From what I heard, the recharge takes around an hour. I'll confirm later. What I do know is that there are two charging modes: one that goes up to 80% and where it can be left safely more or less alone. I heard that we'll have a camera to watch. That's probably what we'll use. For the last 20%, the charging should be supervised by someone to avoid risks. Presumably we'll do this during the pre-flight check.

Reserves are interesting. First of all, we'll operate it so that it's mandatory to have 100% at takeoff. In the instrumentation, there's a timer that shows remaining time, given the current power setting. There's also a display showing the current state of the battery charge as well as the battery health. Electric aircraft won't operate like piston aircraft where you land with at least 30 minutes spare. I don't know what EASA says and I don't yet know our standard procedures. Most of the operations will be in the circuit, of course.
neilmurg, youngman1 liked this
Autocorrect is so frustrating. It's always making me say things I didn't Nintendo.

gfry wrote:When you state the battery gives you about an hours worth operation, does that include the equivalent of the 45 minutes fuel reserve?or is it plus the 45 min reserve?

That's the total. According to our FI, managing the margins will be one of the main differences in flying the Velis compared to the Virus (or any piston aircraft). The 30 minutes margin required for VFR operations using fuel (used to be 45 minutes) may not be directly applicable, but I haven't yet seen what the law says. Or rather: how it's interpreted by EASA for electric aircraft.

One thing to keep in mind is that one of the reasons we have 30 minutes reserve in the tanks is that there are so many different uncertainties in knowing exactly how much fuel we have left. The computers monitoring the batteries are much more exact than the dip sticks, fuel gauges and (when we have them) fuel flow meters available in small GA. Also, most Velis operations will be in the circuit, and then there are no factors like an unexpectedly strong headwind. I don't know yet whether there will be different margins in the circuit compared to the (short) cross-country flights we'll be doing to the other airfields with charging stations. ESGA Backamo is 24 NM away, ESGE Borås is 32 NM away and ESGT Trollhättan is 36 NM away, so we're talking around 30-40 minutes including take-off and landing procedures.

I'll improve on the answers as I learn more. Please don't equate my personal poor knowledge with fundamental flaws in the concept. Keep watching!

youngman1, neilmurg, Flyin'Dutch' and 1 others liked this
Autocorrect is so frustrating. It's always making me say things I didn't Nintendo.

Stu B wrote:Why does the Vellis omit the speedbrake that the Virus provides? Is it because you can happily reduce engine RPM to zero (or allow the propeller to turn the motor and operate it as a generator?) rather than the typical idle RPM for a combustion engine?

On base/final, the propeller does indeed operate as a generator. Whether that energy loss is sufficient to help reduce the speed and lose altitude to make a speedbrake unnecessary is actually something I was discussing with a fellow pilot yesterday. If not, the Velis will be one slippery aircraft that will float a lot, just like the Virus does if you land without speedbrake. (I've landed the Virus with and without speedbrake, and the difference is big.) I personally think that the generator effect does make a difference, but we'll see what it feels like in the air.

I must say that the questions I get here are very relevant and thoughtful. Thanks for that. I'll try to elaborate and, where needed, correct myself as I learn more.

In other news, the wings have now been fitted, but I don't have any photos to share.
Autocorrect is so frustrating. It's always making me say things I didn't Nintendo.

In the video, they say that the battery charging on base and final will be a future thing. I remember the Pipistrel rep describing that feature when they did demo flights with the Alpha two years ago, so I did believe it was there on the Velis. Also judging from the video, the landing performance could have been aided by a speedbreak: it looks very slippery, just like the Virus. As you’d imagine, most of the ways the Velis handles are similar to the Virus.

I learned about runway closures on my solo qualifying cross country - arrived at aerodrome and discovered an aeroplane had done a wheels-up, so had to divert... ISTR there was some debate about whether it counted as I hadnt landed at the planned aerodromes, but all was fine and a good learning experience never forgotten.

skydriller wrote:I learned about runway closures on my solo qualifying cross country - arrived at aerodrome and discovered an aeroplane had done a wheels-up, so had to divert...
Regards, SD..

I learnt about runway closures when I was charged €112.50 for 2 hours.

neilmurg wrote:I had thought there might be a quick change battery option...

Is there the possibility of plug in/out swappable batteries for quick turn arounds in a flying school?
To maintain superior longevity of the battery, a breakthrough design employing liquid cooling for the batteries was employed, which precludes quick battery swapping. Consider that each of the two batteries weighs approximately 70 kg; quick swapping would necessitate additional ground handling equipment and introduce potential safety hazard associated with battery dropping on the floor.

[Cynic] But then why would they chase that goal when they go on to say this, a recommendation no less:-

[/Cynic]
Not sure marketing have thought that through.

Don't get me wrong, I do like the idea of electric flight and we do have to start somewhere and work it up, I just don't think we're there yet...by quite a way.

For us at Wycombe we have White Waltham easily less than 10 minutes away. And WW would have us.

It might not be for everywhere but that doesn't make it unworkable for the places where it will work.
Flyin'Dutch' liked this