Cessna571 wrote:This is from an iPhone app called

Other apps are of course also available.
On android, both Windy and Rain Radar give the same pictures as above, whilst also giving cloud cover, cloud base and various other info and predicts - very useful for longer term (I find them quite reliable up to 3-4 days in advance) planning.
JAFO liked this
We all live under the same sky, but we don't all have the same horizon.

Anyway, regarding the thunderstorms...

They’re not going to race up and envelop you. I’d just fly there, and monitor it on Rain Alarm for 30 mins before you leave. They’ll pass through if they appear, and it can only be a 30 minute flight, so not exactly a major trip over a hostile landscape. You’ve got heaps of diversion options.

What’s the worst that can happen. You have to stay on the island overnight and drink beer.

I’d just go for it and deal with what comes your way if I were you.

Have a great trip.
johnm, Cessna571, defcribed and 7 others liked this
Never criticise a man until you’ve walked a mile in his loafers

Akak wrote:Thanks very much. I did hope it was as simple as just avoiding flying through or under any nasty looking clouds! I just didn’t want to be up and suddenly thunderstorms appear out of nowhere.

PROB30 isolated CBs I'd go flying but I'd not necessarily expect to reach my destination - expect to have to turn back.

Any hint of embedded CBs and I don't take off.

"[S]uddenly thunderstorms appear out of nowhere":

(I'd been expecting the mayor as a passenger on that trip, but she sent her husband along instead. Just as well - with the delay on the ground at Norwich we got back home loooong after the mayor's next civic engagement.)

not too much higher near Fairoaks ..

Flying between TS tactically is a death trap in GA aircrafts, it is not experience or equipment (stormscope, datalink, visual) that you are missing it's the SPEED, you will be doing 80kts around TS in any GA aircraft (I know some cruise at 160kts but they will slow down to 120kts yellow arcs when they wiggle and about 40kts get shafted by turbulence and windsheer), so if you do the math it is dead easy: TS lifecycle is 10min, you need to say 20nm clearance away to keep teeth and visibility, that's 120kts so you are barely moving while they pop up/down around you, you will get caught soon or latter whatever your decision making as you can't run away...

Flying under TS means precautionary landing or forced landing before you lose VMC or control, you have to cut the loss not making it to destination or even back, no point climbing above MSA to fly IFR in a CB/TS cell, but between Culumnimbus and Cumulusgranite the choice is obvious

Enjoy, they make some nice views from distance, so worth flying even if you don't make it to destination, if you do, the sun makes a nice appearance 10min after they passed at destination !

I know it is a hot day, just take more fuel

Not if you have a short runway...
TheFarmer, Dave W, Ibra and 2 others liked this

Takeoff, it is a tough one I am still thinking about it...I think I would cancel takeoff when calculation changes between time of planning and engine start

For landing, tough as well, you don't have to land with full fuel

but then you need to carry fuel if you can't land

On convective days with heavy rain, the wind I see overhead join is different from the wind in flare and different from wind while taxying, lot of pilots tend to stick to long instrument runways used by airliners when it gets wet & convective, others will pick a clam dry grass along the way, land visually, watch the full show and takeoff again (airliners do not have this luxury) 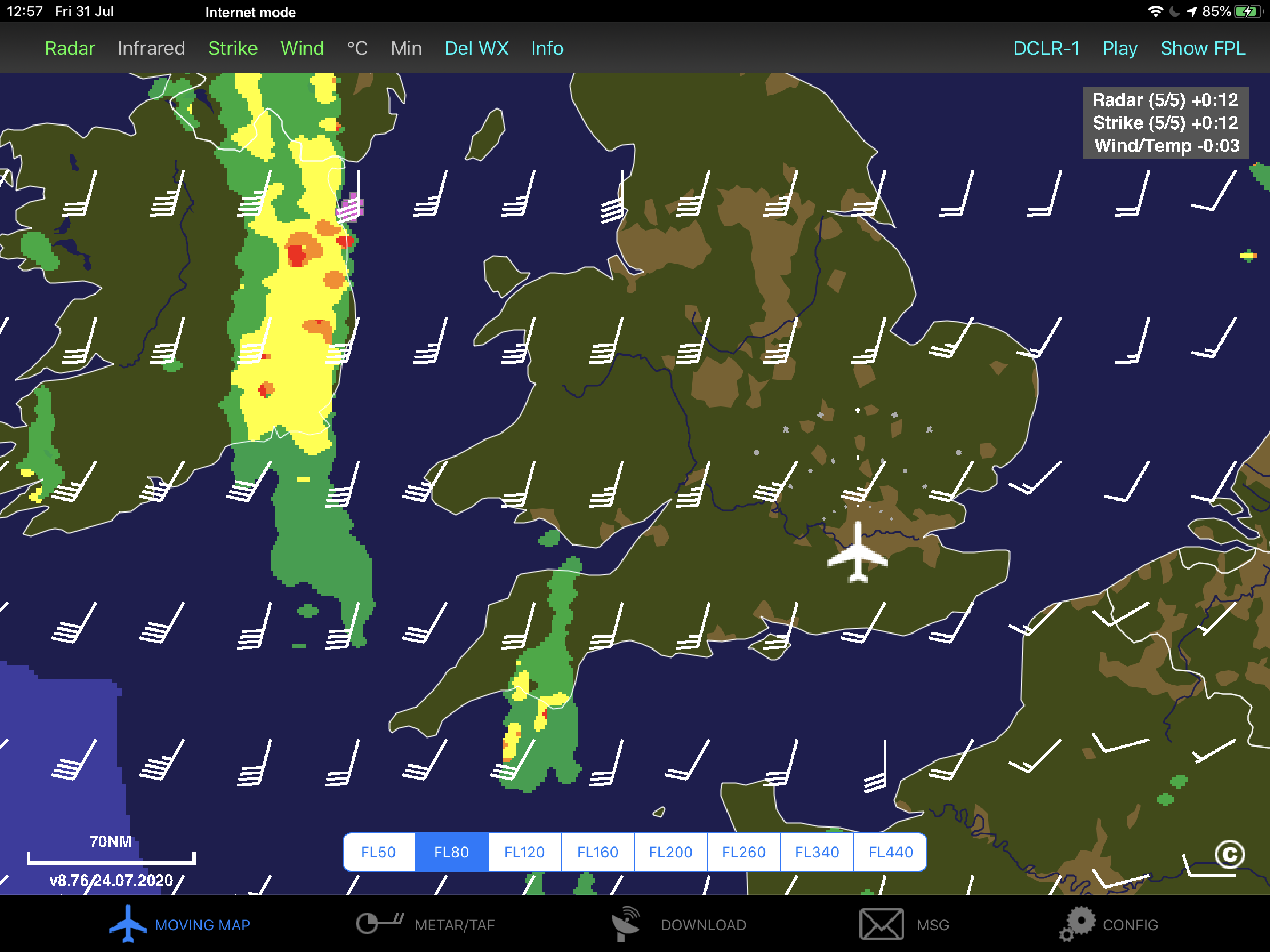 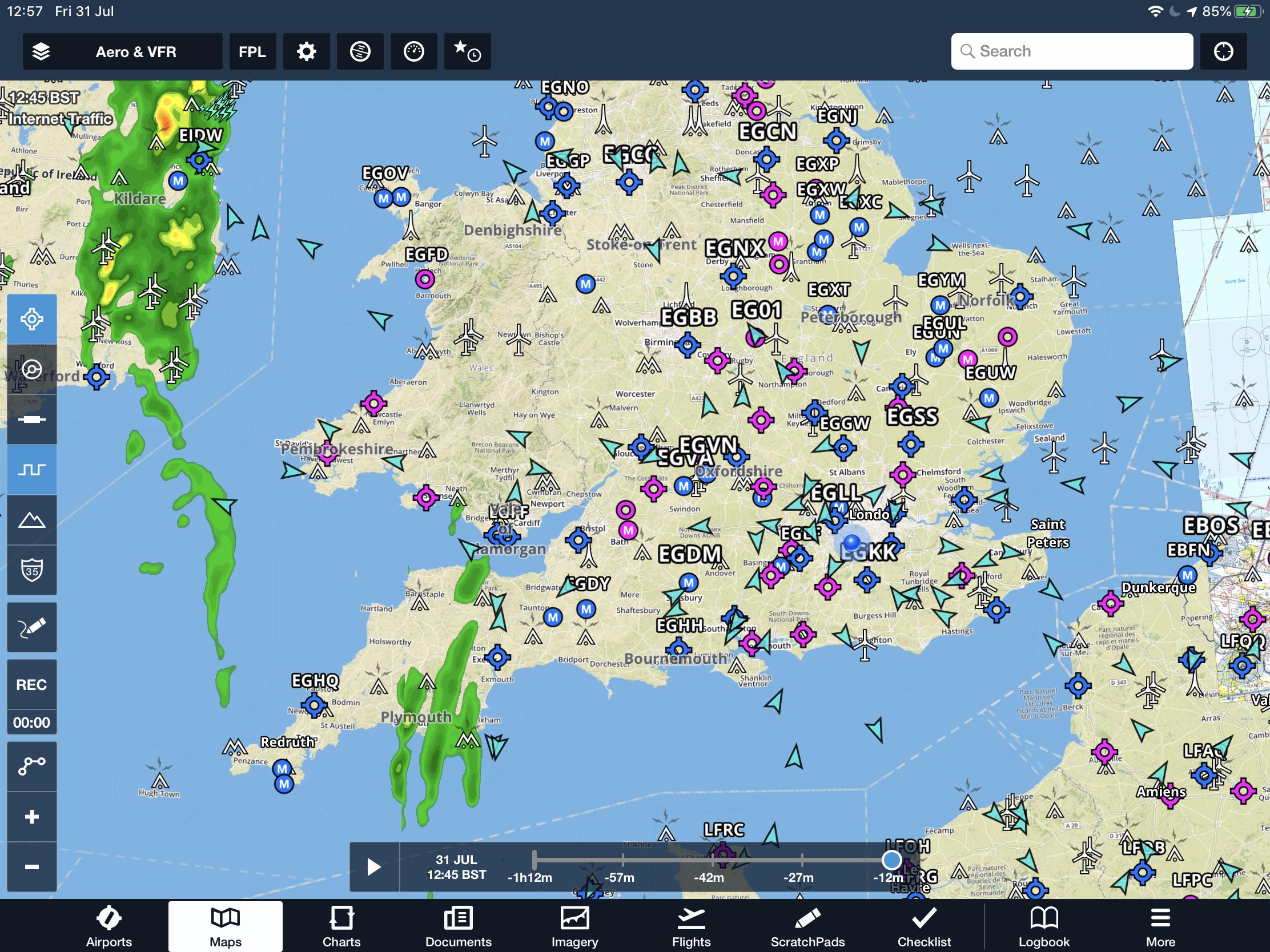 Long ago I wrote: "Never cancel a trip based on a PROB30, always at least go to the airfield."

Just my take on it.
Iceman, PeteSpencer, defcribed and 1 others liked this

Iceman wrote:It looks pretty quiet out there at the moment.
Iceman

It's depressing enough having to suffer the high winds and rain I am presently enduring without having pics of aeroplanes tucked up in hangars and images of empty skies posted. What a waste of beautiful weather.

Ibra wrote:This one looks like high altitude convective weather build up not frontal one, you will be flying under their level anyway, so losing sight of the ground is not an issue, but always keep bits of blue sky above and plan the route around them

Good point. For those who dont know the Gramet site, its well worth getting to know.
From here: https://www.ogimet.com/gramet_aero.phtml.en.
You input the details of your flight- it doesn't recognise small strips, but use the closest large airports - and the flight times offset from the time of the GFS model run used as a base and it will give a graph along these lines: 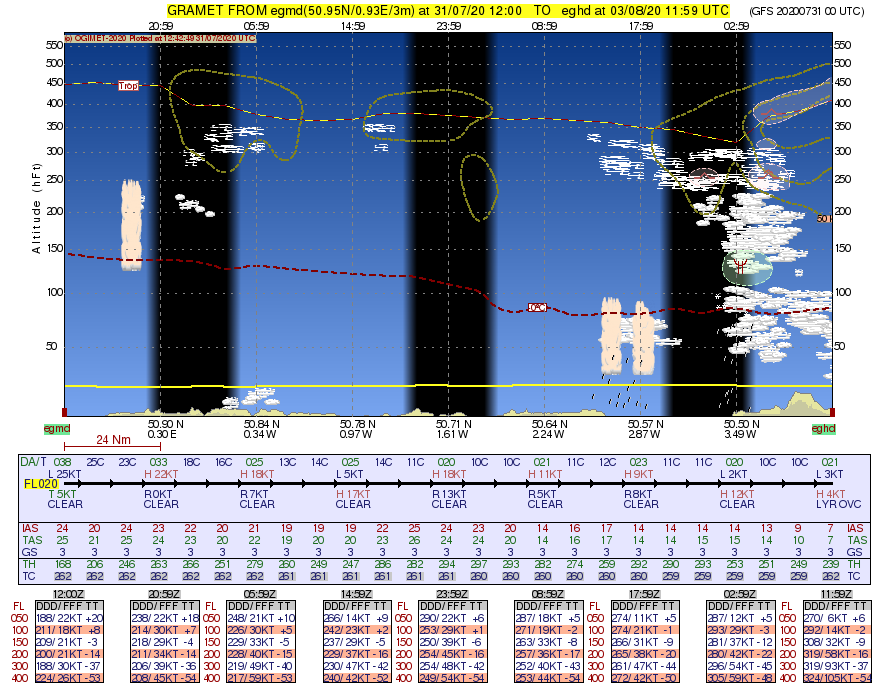 In this run, I've pretended to fly from Lydd to Plymouth over 72 hours from midday today (ie very slowly...), so this gives a rough idea of the weather on the south coast for the weekend.
You can see that today, it shows some TC in the early evening but with bases around 12k or so, whereas on Sunday, there are likely to be (i) more TCs and (ii) lower down with bases around 3k or so.
It will also give you temperature profiles, wind conditions etc along your route.

It takes a bit of practice to read the location/time but used a bit creatively there is a lot of info which can be gleaned from it.
Cowshed, Ibra liked this
We all live under the same sky, but we don't all have the same horizon.

JAFO wrote:I keep a notebook in which I write down the thing(s) I've learned from today's flight. It is a rare day when I don't have something written down.

Long ago I wrote: "Never cancel a trip based on a PROB30, always at least go to the airfield."

Just my take on it.

Even when it's PROB40, depending on the phenomenon being described and the general weather situation the 'probably' can often be realistically qualified with 'probably not right here at any given moment' or easily avoidable at a tactical level.
JAFO, Gertie liked this
Schrödinger's cat walks into a bar. And doesn't.