Flyin'Dutch' wrote:Carb Heat cold after touch down or on go-around.

I always pop carb heat to cold at 300ft to avoid potential for rich cut in the event of a go round / aborted landing?

I have to stress that I’m not saying you are wrong. Just interesting to note differing methods.

It doesn’t really matter if you do that at 300’ or later. The issue is less around avoiding a rich cut (which is avoided by appropriate throttle-technique) and more to do with ensuring that you have 100% of power available if you need it.
Flyin'Dutch', T6Harvard liked this


Having come to a complete halt after landing:
Flaps up
Fuel pump off
Carb heat to hot
Mixture Lean
Transponder off

Neither. IMO you are eliminating risks as an emotional response, rather than logical, that are so small they are insignificant in terms of the overall risks of flying GA.

I will, however, defend your right to do so.

Emotional response maybe, but they are all the result of something bad that has happened to me and I don't want to put myself in the same situation again.

That's where the logic fails, IMO.

That something untoward has happened is not an indication it is has higher probability of happening again. That it did happen and you are still here is testament to it turning out okay.

If we had all to desist from activities in which we had something bad happen, in the belief it would happen again, we wouldn't have much of a life.

EDIT: seeing @Rob P's post above caused me to wonder what you would do if, like Rob, you had an EFATO. Would you stop taking off and so hang up your headset?
AlanM liked this
Misc.

lobstaboy wrote:The paper chart thing, for example and to answer Rob question, is because I need the reassurance (emotional) that if I end up during the flight having to rely on the paper chart then I know that my planned route 'works' on paper

Ah yes! Been there!
rogerb liked this

I agree with all of OP's golden rules except the water crossings: But I always wear a life jacket and take a life raft.

I'd even go one step further and say as well as marking a VFR paper chart, if I'm flying IFR I take the up-to-date Lo level Jepp IFR charts too: I've been caught out hunting for WPs when London chucks my filed plan in the bin and vectors me to strange places I've never heard of, often miles away.....

Gives me a sporting chance of sounding semi-professional and finding 'XXXXX' and not having to say 'where the f's that?'

All part of my innate aversion to 'screens' I guess.

G-JWTP
kanga, AndyR, David Wood and 6 others liked this

Never accept a "do you want to do the landing" offer from any PiC who isn't an instructor in the other seat, unless it was pre-briefed on the ground.

Never fly anything I've not checked the insurance documents in person.

If one is available ALWAYS have read the official POH before flying a new type, irrespective of who I'm flying it with. Unofficial notes won't do, unless there really isn't a POH.

Before making any aeronautical decision, always run through my mind the phrase "at the subsequent board of inquiry".

gasman, Sooty25, Flyin'Dutch' and 4 others liked this 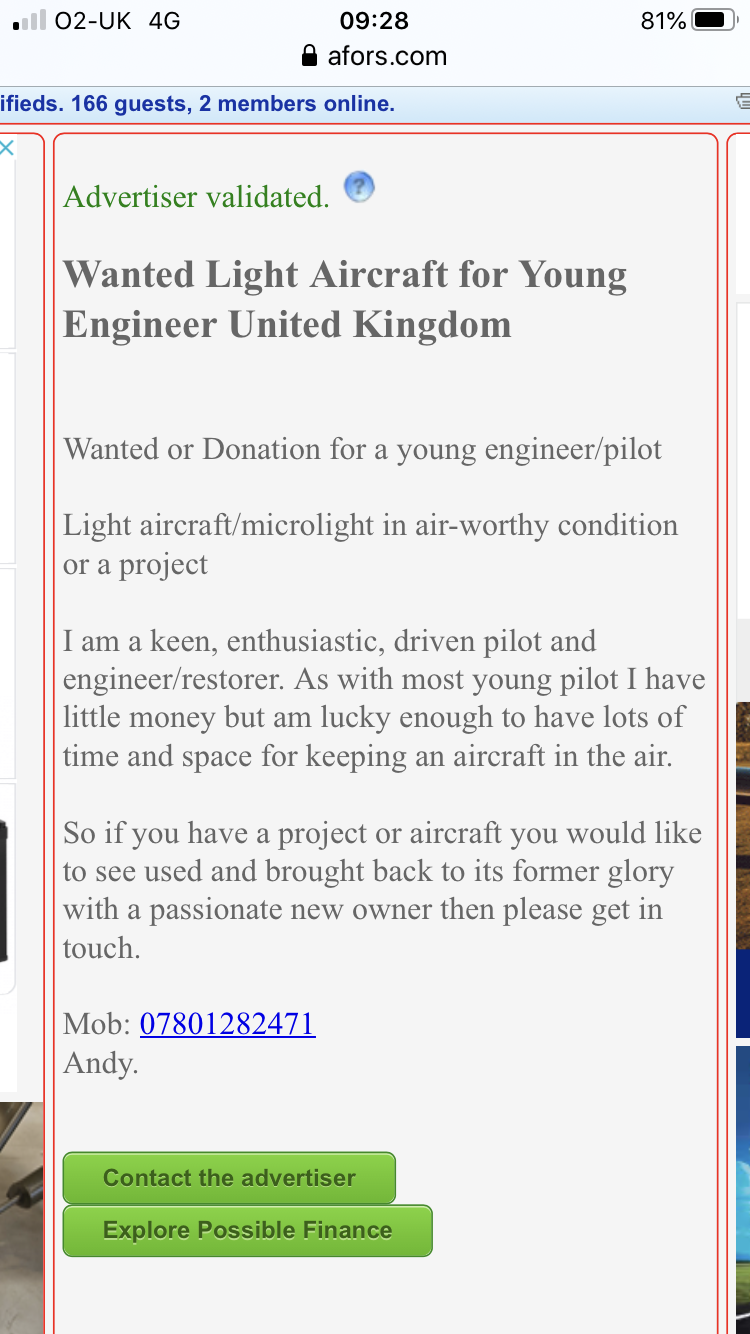 Genghis the Engineer wrote:
Before making any aeronautical decision, always run through my mind the phrase "at the subsequent board of inquiry".

This thesis applies shirley to the entire working life of any professional?

In my case substitute 'Coroner's Court' or 'Old Bailey'

T6Harvard liked this
Pete S as was

Genghis the Engineer wrote:
Before making any aeronautical decision, always run through my mind the phrase "at the subsequent board of inquiry".

This thesis applies shirley to the entire working life of any professional?

In my case substitute 'Coroner's Court' or 'Old Bailey'

True, but those are the precise words used to me by my first boss as a young Trials Officer at Boscombe Down.

lobstaboy wrote:- I don't hand prop aeroplanes, mine or anyone else's

You need to get over this one, you'll miss out on a lot of good stuff! With the right training/briefing and method it can be perfectly safe.
TheFarmer, lobstaboy, Rich V and 2 others liked this
The quickest way to fall out with people is, discuss politics.

lobstaboy wrote:- I don't hand prop aeroplanes, mine or anyone else's

You need to get over this one, you'll miss out on a lot of good stuff! With the right training/briefing and method it can be perfectly safe.

As are the other items on the OP's list. But heh, we are all complex creatures.

@Genghis the Engineer I'm sure I asked this on another thread a while back? Anyway, what do you mean by

Genghis the Engineer wrote:Never attempt a take-off unless I am sure there's somewhere to go off the end of the runway.

that you will not fly to/from anywhere where there is not a clear and safe option?

that you are aware of the best option, however bad it is?
Misc.

By AndyR -  Wed Jul 15, 2020 9:55 am
Like 7
Wed Jul 15, 2020 9:55 am #1783551
Stay aware, know your aeroplane
Always enjoy the flight
Regularly test yourself and apply tight tolerances to your flying
Pass 60° of bank whenever possible
Never forget to grin
Hand fly in hard IMC as often as possible including an approach to minima
Experience inverted flight as often as possible
Smile cos it’s fun
Never turn down a chance to fly something different
Have fun, life is so short
T6Harvard, Charliesixtysix, Josh and 4 others liked this
Imagine what you might try if you thought you could not fail...