Stumbled upon this video with plenty of learning opportunity for both the author and those watching.

Take away lesson for me; don't break your own rules/SOPs.

Aerotech Flyer, Iceman, seanxair and 7 others liked this
Frank Voeten
Use email please rather than PMs

By Aerotech Flyer -  Tue Jul 07, 2020 8:05 am
Like 2
Tue Jul 07, 2020 8:05 am #1781886
Great video, Frank, really like his humble attitude and there are some good lessons passed on there. Reminds me of one of my own tenets: "If you learn by your mistakes, then I ought to be one of the most experienced pilots around!" However, the video itself is also absolutely stunning for backdrop and interest, plus the last drone shot of the hilltop departure is simply awesome!
mick w, Flyin'Dutch' liked this
All previous trip reports listed on revamped website here http://www.airclark.plus.com

As an aside, what fantastic places to fly, including some pretty rough-ar5ed gravel bars.

(What's the little flip-up HUD-like gizmo on the coaming? Is it an AoA indicator?)
Flyin'Dutch' liked this
“I am somehow less interested in the weight and convolutions of Einstein’s brain than in the near certainty that people of equal talent have lived and died in cotton fields and sweatshops.” Stephen Jay Gould

(What's the little flip-up HUD-like gizmo on the coaming? Is it an AoA indicator?)

Has anyone got experience in flying with one of those, especially when it comes to strip flying?
Frank Voeten
Use email please rather than PMs

mick w wrote:I once 'plonked' a Quickie sideways to prevent a Grass Runway excursion ,the POH suggested it was the thing to do, even on Tarmac !!.

For those who know Popham, I saw a (censored, 4 seater, normal GA aircraft) land at around the 26 numbers.... great you think, but to the pilot it was runway 92 as he was going to the East. (08 was in use and he went all the way down it before touchdown). The final bit is slightly uphill, and ends in the hedge and the Esso station. The aircraft weaved into major S turns to slow before the hedge and stopped just short. I knew who the CFI was from whence it came, and I was about to dial him to ask if he wanted engineers to look at the aircraft, but I paused just to wait to see it parked and if there was a problem like illness or something. When it parked, and people got out, I realised if I had dialled the CFI I would have had to leave a message, as I was watching the CFI climb out of the p1 seat.
T6Harvard liked this
Irv Lee - (R/T & Flight Examiner)
Deconfusion & Preflight Aide-Memoire: http://tinyurl.com/pilotpal
UK GA Twittering not Tw@ering: @irvleeuk

By MichaelP -  Tue Jul 07, 2020 10:42 am
Like 1
Tue Jul 07, 2020 10:42 am #1781919
I helped set up an AOA display on an Aspen PFD in a Malibu Jetprop.
This enabled the owner to approach much slower than he was comfortable with before and allowed for a shorter landing at Nok airfield in Thailand.
I have a video of it on my iPad.
Flyin'Dutch' liked this
MichaelP
Wandering the World

Dave W wrote:Yes, it is. He has a video from a few years ago where he describes its use.

These guys have been promoting AOA for some time. Here is a link to their website which has several videos about it:

Bill McCarthy wrote:mick - Q1or Q2 ? I believe you have to put the tailwheel down first in the Quickie.

Well done the pilot for sticking his head above the parapet. I keep being told to set and stick with personal minima and to avoid 'get there itis', now I see why!

@IrvLee, that story fills me with trepidation but at the same time it shows that big mistakes are sometimes forgiven by the skygod. I love the idea of Runway 92!
Flyin'Dutch' liked this

T6Harvard wrote:@IrvLee, that story fills me with trepidation but at the same time it shows that big mistakes are sometimes forgiven by the skygod. I love the idea of Runway 92!

If 26 were the active one on other days, the 'land long' pilots going that way were obviously known as '80' arrivals..... here's one: 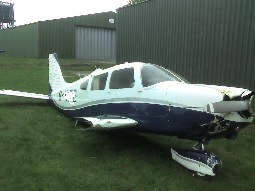