People often run them in the 4000 range for the quieter flight it gives and ‘fuel saving’.

Saving a couple of litres an hour on an engine that’s frugal anyway seems futile at the expense of a costly gearbox.

Anything less than 4600 rpm in the cruise really isn’t good though. I’d rather buy a 1500 hour 912 that’s been run at 5300 all the time than a pandered one.
Never criticise a man until you’ve walked a mile in his loafers

G-JWTP wrote:Look on the bright side, you could have an IO540.

G-JWTP wrote:Look on the bright side, you could have an IO540.

It definitely costs more, but the improvement in your verticals is pronounced

It definitely costs more, but the improvement in your verticals is pronounced

Bolt an IO540 onto a Rans 6 and it'll only do verticals!
davef77 liked this
The quickest way to fall out with people is, discuss politics.

Sooty25 wrote:Bolt an IO540 onto a Rans 6 and it'll only do verticals!

The 912s I have flown are perfectly happy in the 4,800 to 5,000 RPM range and so I wonder why 5,300 RPM is your chosen setting?
In some types this will put you uncomfortably in the yellow arc on a bumpy day.

Operating a flying school of natural abuse with students and renters insensitive to loading the gear by gentle initial application of the throttle, and those who move the propeller lever too quickly during the run up, I am impressed by the robustness of the 912 engine.

I was astonished when the engine was being removed from a Katana, why?
It had 2,700 hours on it.
Another one was in terrible condition, horribly treated and then slammed into the ground for an unfitting end (not at my school)..
3,900 hours, never changed a cylinder, and run on horrible 100LL its whole life...
Lycoming and Continental engines can never put up with the same abuse.

In answer to the original question, it’s in the carbs.
Usually rich mixture is indicated by black exhausts.
Is a ‘choke’ stuck?
Is a diaphragm split?
If you have a pre carb carb heat control is it still hot?

I had a partial engine failure in a Katana, reckon about 45% power available... The carburettors were shot.
The constant speed propeller will hide power loss.
MichaelP
Wandering the World

Sooty25 wrote:Bolt an IO540 onto a Rans 6 and it'll only do verticals!

fancy taking a guess at to what the dead engine glide ratio will be with that prop?!
The quickest way to fall out with people is, discuss politics.

Best otherwise is:-
Two Plugs out one from each carb cylinder this afternoon. Photo taken.
Hard to discern a large difference but the left plug (i.e. engine cyl. on the stbd) was slightly darker.

The choke on that carb was hanging on the slightest amount & it may not have been fully shut off.

Won't know if any difference till flying again this Saturday

When posting a reply, scroll down to 'Upload an Image'. Click on 'Select Image' and navigate your folders until you find the one you want and then click 'Choose'. Then click on the green 'Upload Image now' and it will place the photo in your reply as an Imgur link. The photo will appear when you click on 'Submit'. 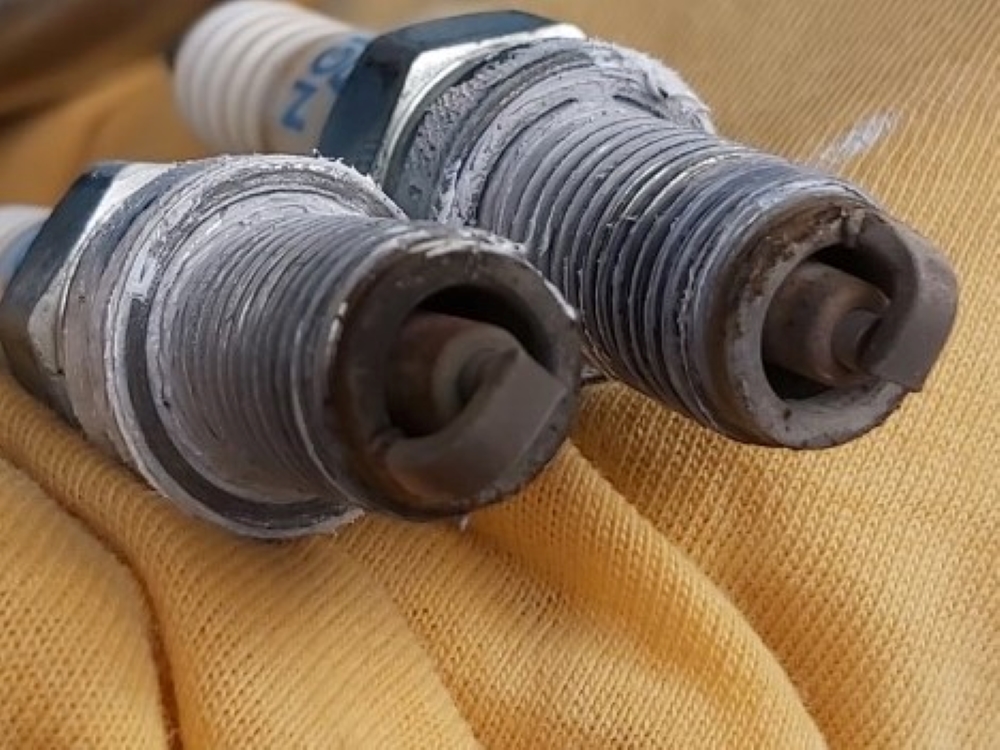 By ivor.phillips -  Thu Sep 12, 2019 12:06 pm
Like
Thu Sep 12, 2019 12:06 pm #1719738
They are very marginally rich, but they would go that colour with a bit of ground idling,
The front cylinders will always be slightly weaker than the rears due to the unequal length
Inlet manifolds,
The perfect colour is a light tan to the front and slightly darker tan for the rear cylinders,

TheFarmer wrote:Roger Lee is correct. The engine is much happier at 5100-5300 rpm.

People often run them in the 4000 range for the quieter flight it gives and ‘fuel saving’.

Saving a couple of litres an hour on an engine that’s frugal anyway seems futile at the expense of a costly gearbox.

What are the main issues caused by running in the 4k's? I run the 912S in my CT at between 4300-4500, any more than that and it's screaming and I would be pulling the wings off. Are the aircraft manufacturers wrong in their setups?
"To invent an airplane is nothing. To build one is something. But to fly is everything..."

buzzthetower wrote:What are the main issues caused by running in the 4k's?

I don't recall the curves off the top of my head, however from memory the engine is not designed to be run at low 4ks. It doesn't produce max torque, max power or indeed even best mixture distribution at such low revs. It's simply a design issue and therefore if run in low 4ks it is inefficient and with that comes the usual issues.

That's my belief, albeit from memory.