How come you've never mentioned this unit before? 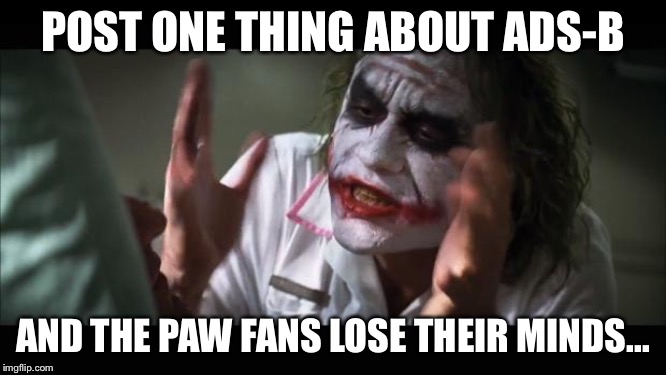 How come you've never mentioned this unit before?

Did you really have to say that? Now I'll have to wade through 30.000 more comments from Gaznav about how fabulous it is, how wonderful it performs, how he's not being paid for these reviews and that everything else in the world sucks... think I'll just go and shoot myself......

leemoore1966 wrote:The software for this product has also, extracted and taken without permission, the aircraft database and spoken audio files from PilotAware, and subsequently included into its own product on github - I think taking without permission, is deemed as theft ?

Permission is then granted under its own license, to be used in commercial derivative works

That really is beyond the pale. There's no excuse for stealing someone else's work and passing it off as their own.

TexasUK wrote:As far as my personal position on using your files, I don't think I really have one on the data ones he has used. If he had copied some of your code, then that would be a different matter.
I'm sure he can record (or every else can themselves) the appropriate sound files for the position reports, although a bit of a monotonous task. I'm sure someone else will record some and make them available if you were to stop them being used.
I'd have to ask (because I really don't know) where did you get the aircraft data for PAW.db that he has used? I'm guessing that it was freely available from some source, and again I'm sure someone will compile the same info if you were to stop them being used. It seems to have OGN/FLN data in there as well, is there a common source somewhere? OGN is free to use as far as I can tell from the the licence it is under, so long as it is attributed somewhere.

I don't understand the distinction between stealing code and stealing data. It's still plagiarism. If it's that easy to create sound files and collate the aircraft data, why doesn't the SoftRF developer create his own rather than stealing someone else's work? Saying that the PAW.db file was collated from some freely available source is like saying it's OK to copy the Oxford English Dictionary and pass it off as your own work because all the words and their meanings are in the public domain.
Dave W liked this

All he's done is rename the paw.db file to icao.db

That is actually even worse because even though what was originally done was done without permission, at least there was an attribution.

All he's done is rename the paw.db file to icao.db

That is actually even worse because even though what was originally done was done without permission, at least there was an attribution.

Not only that, paw.voices simply renamed google.voices, I asked for them to be removed, I don’t think a rename will suffice
Since they were added, their have been multiple forks of the repository, and who knows how many clone (this is not tracked). Meaning multiple copies everywhere